Once you understand the SCA data objects, it can give you a certain glow of to discover, suddenly, that SCA can do some complicated and time-consuming tasks with just a few lines of code. Phil Factor demonstrates how to get the most of SCA's Release object.

My previous article described the DatabaseConnection, iProject and iBuildArtifact objects, but much of SCA’s power is unlocked when we create the release object (iReleaseArtifact), which we can use to synchronize an existing target database with the source, while preserving any existing data. The release object contains the Update script to do the synchronization, an HTML report of the release, and a report of any code issues.

In this article, I’ll illustrate how to access and use some of this information and then demonstrate some basic scripts for SCA build and update operations, with the release object, using as little PowerShell as possible.

SQL Change Automation’s build phase, described in my previous article in this series, produces an ‘immutable’ package representing a version of the database, and containing the validated source to build a new database from scratch, at that version, as well as produce database documentation. It can, when necessary, produce a release package that can be used for even the most complex deployment process.

We use the New-DatabaseReleaseArtifact cmdlet to create the iReleaseArtifact from one of a variety of possible sources. Generally, the source for creating a release package would be the BuildArtifact object, or a BuildPackage produced from it. However, for simple releases we can, instead, create it directly from the source database or even just by providing a ScriptsDirectoryPath.

The Update.sql script it produces is appropriate for a specific target database, or database at the same version. This means that each ‘target’ has its own release artifact, which contains everything required to update the database from the current version to the required version, while preserving data. SCA doesn’t let you make a mistake, of course: it checks. The so-called ‘target’ is more appropriately referred to as the ‘intended target’ or ‘version source’ because SCA just pulls the metadata from it to compare with the source. This means that you can represent the intended target with either a live database, scripts directory, project file, BuildArtifact object or a BuildPackage. A test cell, for example, might have ten database copies but metadata for each will be identical, so you only need one ‘intended target’ and then the resulting release artifact can be applied to all ten of the ‘real targets’.

Figure 1 shows the processes and data around creating the release artifact. 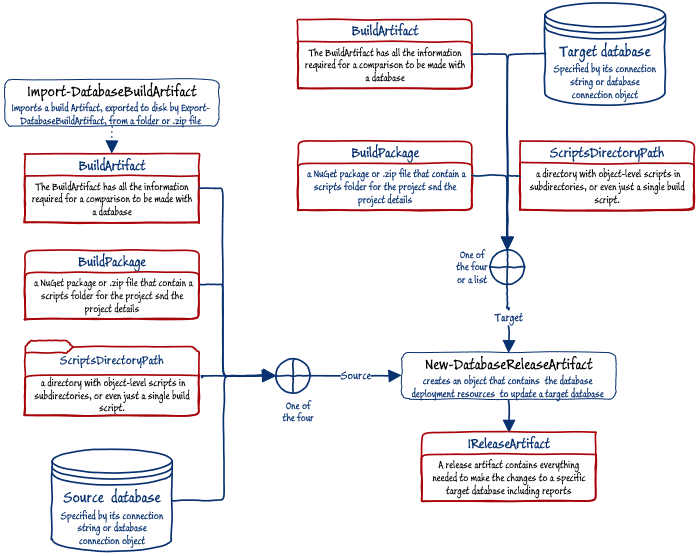 Figure 1: Creating a release object from a source and target database

The Update.sql script produced will synchronize the target database so that its schema matches that database defined in the source. If you want a script that does a complete build from an empty database, you just provide an empty database, or empty script directory as the potential target. A build script is, after all, just a synchronization with an empty database. The iReleaseArtifact can also contain the pre/post deployment scripts and static data. It also has various other properties that can provide a lot of useful information besides, such as the output from a code analysis, in a CodeAnalysisResult object, to tell you if there are any issues, details of filters used, the switches, options, and warnings, and a record of source and target. We’ll be illustrating these a little later.

We can apply the iReleaseArtifact directly to the target database, using the Use-DatabaseReleaseArtifact cmdlet. On doing so, it executes the Update.sql script that will synchronize the target with the source. SCA will also apply any pre-and post-deployment scripts and check that any static or reference data in the source matches what is in the target.

If you are feeling cautious, you can inspect the script first, from the iReleaseArtifact, or you can export all the database deployment resources to a directory with Export-DatabaseReleaseArtifact, so that you can review all the other update resources as well, such as the change report and deployment warnings. 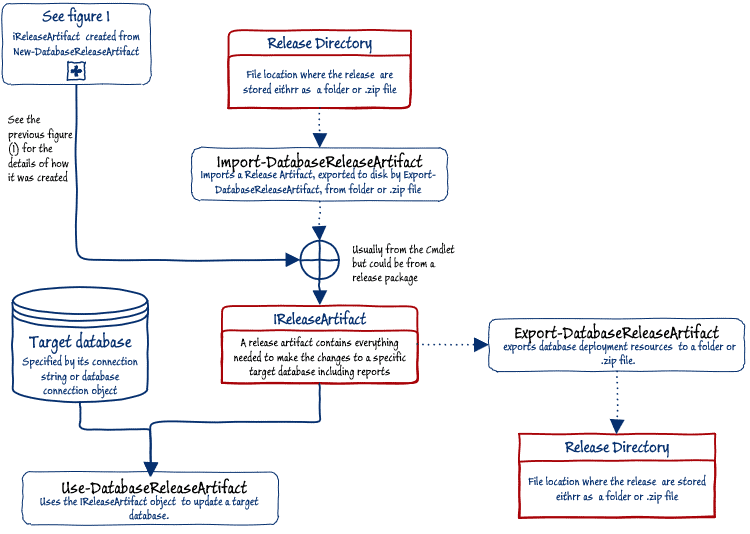 The Use-DatabaseReleaseArtifact cmdlet first checks to make sure you have specified the correct release artefact for the target database and that the migration script isn’t being reapplied. It does this by checking that the target database schema matches the ‘intended target’ (indicated by the target parameter) that was originally used to create the iReleaseArtifact object. If the schemas match, the synchronisation goes ahead. If the schemas don’t match, SQL Change Automation will then know that something has changed, and it will give an error.

If no error occurs, SCA then checks whether the target database schema matches the source schema that was used to create the iReleaseArtifact. If they do match, then the cmdlet will finish as it can assume that the synchronization has already been done and so it has nothing to do, otherwise . If they don’t match that the Use-DatabaseReleaseArtifact cmdlet executes the SQL script to update the target database. It logs any errors that occur in the execution but will continue executing the whole script. After executing the script, the cmdlet checks that the target database schema has updated correctly.

By studying the different ways to create the iReleaseArtifact (Figure 1), we can see that we can bypass the need for a build artifact, by just supplying a ScriptDirectoryPath as the input to New-DatabaseReleaseArtifact. This is useful if we only want to perform simple operations. What simple operations, I hear you ask?

Well, sometimes we aren’t encumbered by all the usual real-life complications. For example, all sources and databases are reachable within the same network and there is no workflow, signoffs or coordinated build process with an application. In such cases, we can create the release object directly from the source, without needing the build object or package.

Deploying a database, along with pre- and post- deployment scripts and static data

This script will synchronize my target database with the Adeliza source directory. The Use-DatababaseReleaseArtifact cmdlet will deploy static data to the target database as well if the scripts for the data are contained in the source folder, indicated by the ScriptDirectoryPath. You can opt not to sync this data. The SQL Compare options specified in the iReleaseArtifact object will be used in the schema comparison checks before and after running the update.

The collection of the output into a file is to switch off verbosity in the main output stream, rather than for any real desire for a log. A detailed commentary is sent to the output by the cmdlet. We’ve chosen to use the scripts directory, but you can opt to use the NuGet build package or zip file, if you prefer. You still get the same good things happening.

As well as bringing the targets up to the same database version as the sources, this provides you with a list of reports from the individual release artifacts, contained in the $ReleaseArtifacts variable. You can iterate through them to find out the script used, the objects that need to be changed and so on.

Here you get each HTML report generated in a separate browser tab.

Comparing two copies of a database

This script will compare the source and target database and display a tabbed HTML page with the script that would make the target identical to the source (see Figure 7), and a list of all objects that are different.(see Figure 8)

This script uses create a release artifact using a directory of object scripts, or a single build script, as the source, and a blank (empty) directory as the target. It outputs the resulting Update.sql script and saves it as a build script to your temp folder. 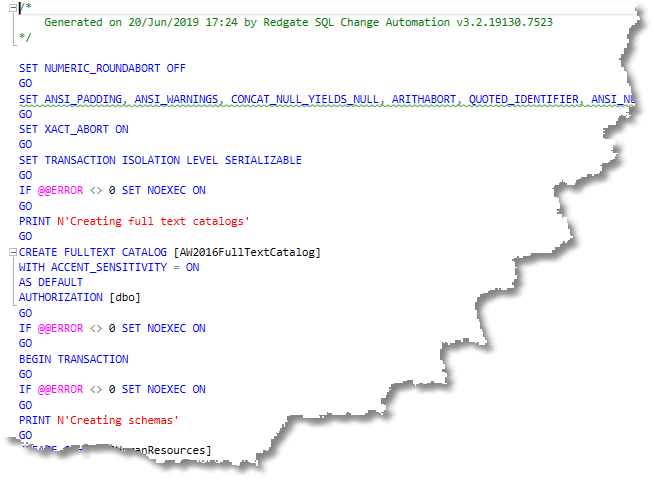 Analysing the source code for issues

Here is how to do a static code analysis on your script, anything from a single script to a collection of object scripts, each in their own directory. Again, we compare the source directory to an empty directory and output the contents of the CodeAnalysisResult object, in the iReleaseArtifact, to a temp folder. 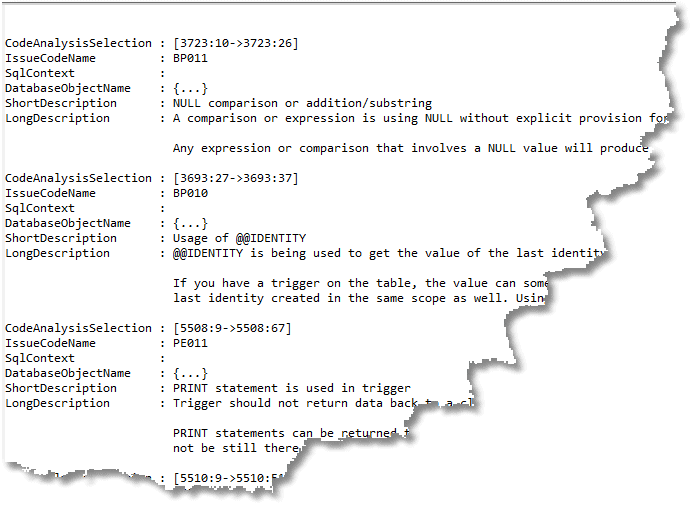 If the long-from report is a bit unwieldy, you can just do a short-form list, sorted by line number of the error. Just change the last line of the previous listing to:

The code analysis is also included in the release report (Report.html), which we can save to our temp directory.

Here are the list of the SQL Code issues, when viewing the report in your default browser. 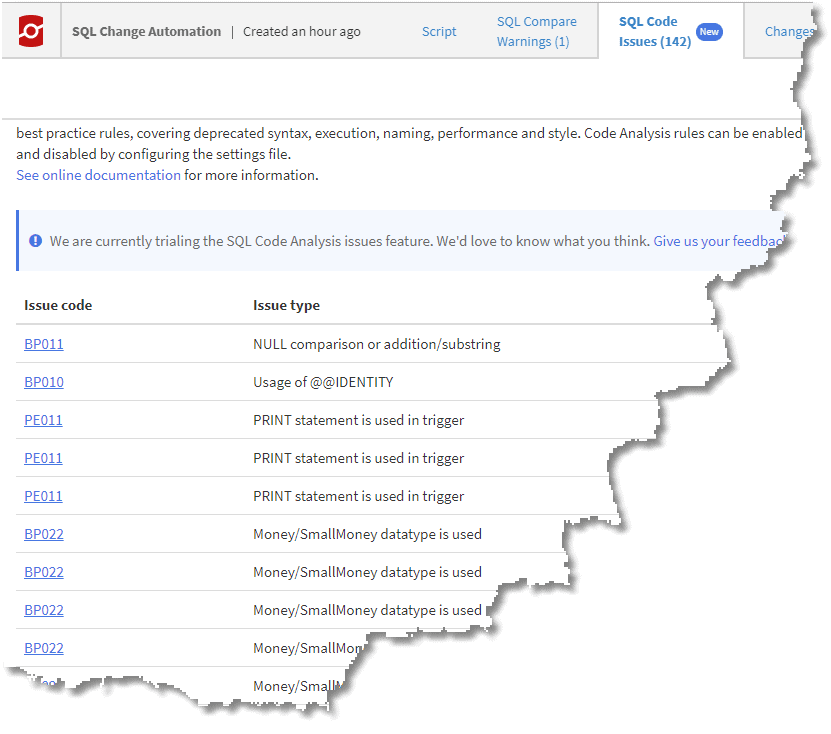 We also see the synchronization script that will be used. 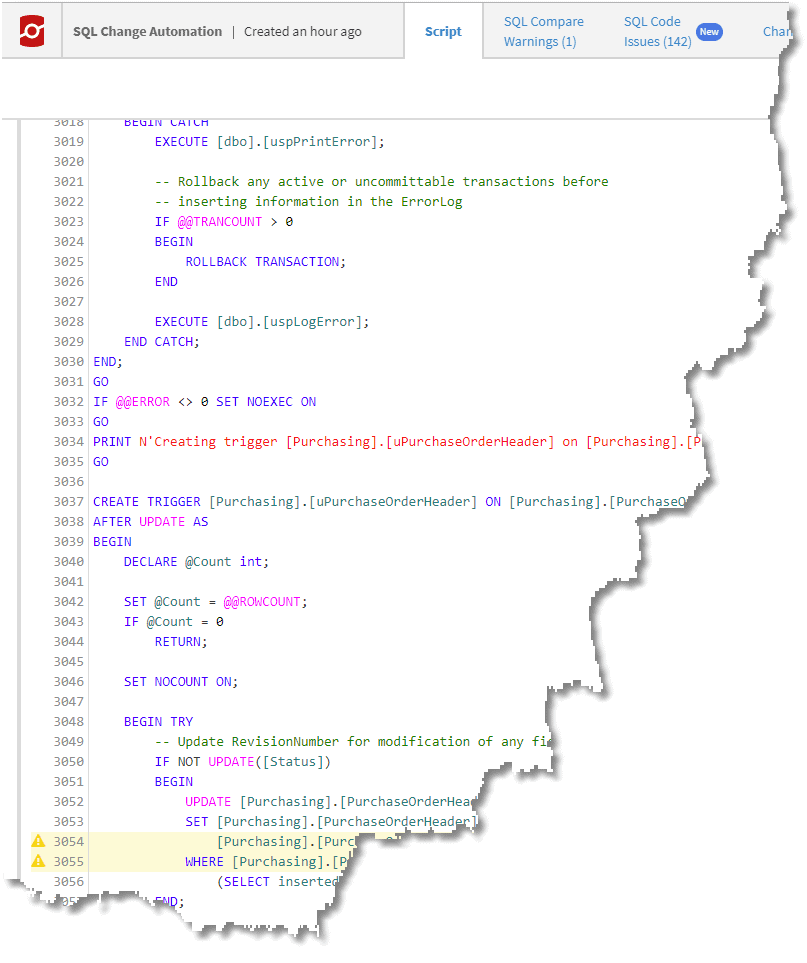 Figure 7: The change script in the tabbed report

All changes to the target are also obligingly listed, in the change tab of the report. These are useful, because they effectively list every object in the build script because we compared with a blank database.

Figure 8: The list of objects on the target that will be changed

SCA automation is designed to be able to accommodate a wide range of activities associated with integrating, building, testing and deploying a database, and allow this process to participate in an application deployment, along with all the approvals, signoff, and other workflow processes. It provides all the objects necessary for this to happen. However, it can also be used, as I’ve illustrated in this article, for even routine database development operations.

To understand how SCA works and how to make full use of its features, it pays to understand the range of parameters the cmdlets can accept, and the nature of the data objects passed between these cmdlets.