Why Support AND Upgrades matter

Do you like the reassurance that a support engineer is only a phone call away when something goes wrong? When disaster strikes, it’s good to know there’s a capable person to hand who can help save your bacon. A support contract is a no-brainer for most organizations when they buy tools for SQL Server.

However, what do you get for the other bit of money you pay every year – the ‘upgrades’ that are part of the same package? Well, you always get the latest fixes for the products you and your team are relying on, but critically you also get lots of new functionality. So I thought it would be good to take a look at what this means, using the example of the new features and improvements SQL Toolbelt users get access to this year.

Earlier this year, we released a number of the SQL Toolbelt tools with new styling and included a product switcher to make it easier to move between them.  For example, if you’re using SQL Doc, you can switch to SQL Compare in just a couple of clicks. Better still, you can take the context with you as you move between tools: the source database SQL Compare looks at, for example, will be the one you’ve just documented with SQL Doc. 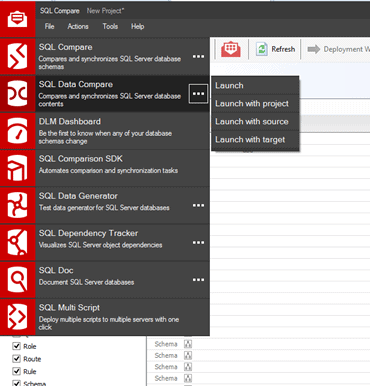 SQL Source Control now offers SQL Server 2016 support, better Git integration and an improved solution for occasional migrations. It lets you assign custom SQL to specific schema changes which might not easily be handled via a straightforward comparison to generate the deployment and upgrade script. The custom SQL you define replaces the relevant part of the auto-generated deployment script, so you have complete control over how changes are handled, and your team members can get the latest changes from source control without the risk of losing data. Migration scripts now also support:

To make sure SQL Backup Pro users can benefit from one of the key features SQL Server 2016 has made available to everyone, not just SQL Server Enterprise Edition users, it now includes improved support for Always On Availability Groups, so you can back them up, including taking a backup from a ReadOnly secondary replica. Additional new features include:

SQL Data Generator just got important new functionality to help with data masking. When populating from another table, IDENTITY columns can now be populated either from the source table or with default values.

And if all this recently released new functionality wasn’t exciting enough, we’ve got all of the following features coming soon for SQL Toolbelt customers with support and upgrades: SQL CI and SQL Release, our tools for database continuous integration and automated deployment, are getting the once over and being merged into a single product called DLM Automation, containing enhanced PowerShell capabilities.

We’ve discovered that having two separate build and deployment tools isn’t necessarily intuitive for users; our research suggests that a single product containing full automation capability is simpler than having to install two separate tools. As a PowerShell tool, DLM Automation will also provide more flexibility to customize your own workflows.

We’re in the middle of adding support for markdown generation to SQL Doc and expect this to be out in the next few weeks. Watch this space!

SQL Server 2016 support has already been released over recent months, but we’ve still got a major release in the pipeline. SQL Compare 12 will include the biggest visual change in the tool’s history and will go out with a brand-new UI, giving our flagship product a 21st century design overhaul and aiming for even better usability.

The SQL Monitor team is aiming to release a build every two weeks that includes the latest incremental features and bug fixes. However, the big news this year is that we’re completely overhauling the Server Overview pages.  This will make it a lot easier to understand exactly what was happening on your SQL Server at any one time and then to analyze and diagnose the root cause of the issue. We’re looking forward to demoing the new functionality to you at PASS in October.

Just like the other tools, SQL Prompt already supports SQL Server 2016, but another exciting feature Beta participants are getting a first taste of is its improved formatting functionality. It’s a big project for the team, and if you want to find out more about this release, keep an eye on the SQL Prompt forum.

The SQL Toolbelt contains all the tools you’ve just heard about and, with a valid support and upgrades contract, you get access to the new features at no extra cost. To learn more, visit www.redgate.com/sqltoolbelt or email sales@red-gate.com to manage your support and upgrades package.

For many companies, particularly those in the financial sector, a key technology consideration is risk management because if systems go down, it can cost a lot of money very quickly.