Going strong into its fourth year, we published the 2020 State of Database DevOps report at a time when we couldn’t have predicted the changes to come for every industry. However, it still contained valuable insights from thousands of IT professionals around the world, giving voice to how their teams are adopting DevOps practices, the obstacles their teams are facing, and the many unique challenges that lie ahead.

As part of that larger report, we’re now releasing a special 2020 State of Database DevOps Report in the Healthcare Sector edition that takes a deeper look into new trends emerging in the healthcare sector in response to the pandemic, and looks at the steps that healthcare IT is taking to prepare for the long road ahead.

The healthcare sector was already ahead of other sectors in its adoption of DevOps and database DevOps, and recent events may accelerate the pace at which it’s introduced.

While the survey behind this report was undertaken prior to the pandemic, the insights remain significant because the current climate has brought other relevant issues to the fore. The report further highlights the differences – and similarities – that exist for businesses in healthcare compared to other sectors like government and financial services, and provides some guidance on where they should focus their digital transformation initiatives. Let’s dive in.

Database DevOps adoption is on the rise

The Healthcare IT sector is truly embracing database DevOps, with 70% of respondents saying that they’ve adopted DevOps across all or some projects, or have a Proof of Concept in place, compared to 68% across others sectors. And while this is a pretty close margin, it’s still significant that 41% of respondents have moved beyond the PoC phase, showing an inclination to move toward modernization.

The only thing holding the others back is a fear of disrupting workflows – which led with 24% of the responses. However, it was followed closely by lack of skills in the team (22%) and lack of alignment with Dev and Operations (16%). 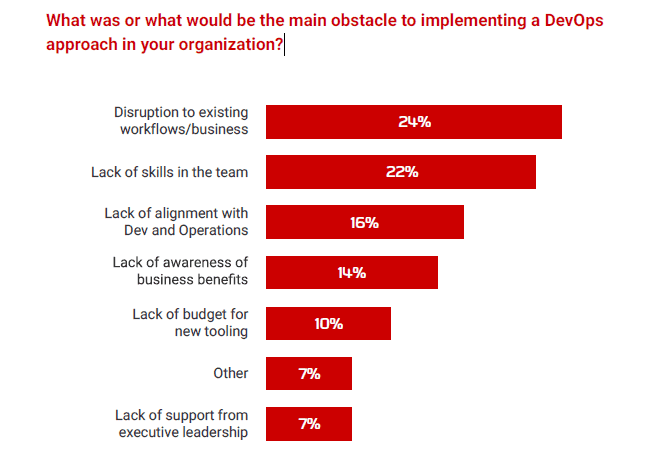 Leading the pack on automation

Adopting automation is top of mind for many in the healthcare sector. And unlike other sectors that are automating to increase the speed of delivery, the healthcare sector is focused on freeing up developer time, which came in at 27%. It’s a notable difference because it shows that the healthcare sector is likely more concerned about wanting to improve the quality of development rather than just the pace to not only meet the needs of these critical services, but also because compliance is probably playing a role.

Looking longer term, the healthcare sector is moving slightly slower in terms of automating database processes, but is still relatively optimistic. Nearly two thirds of respondents believe it will take less than a year, with 24% of those in the sector estimating that it will actually take 6 months or less, compared to 28% across all sectors. 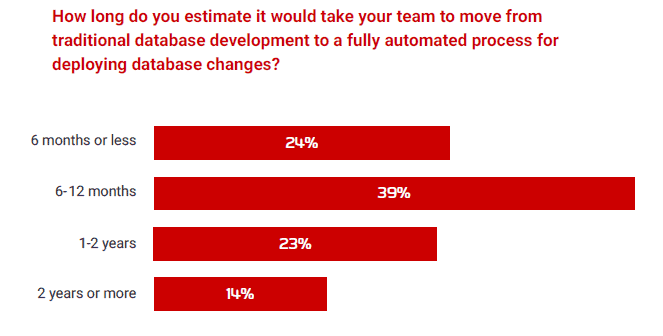 58% of respondents say that they have version control measures for database code in place, which enables automated builds and deployments. Version control can serve as a key component for compliance because it’s the foundation for ensuring development processes are both reliable and repeatable, while removing common human errors.

Cloudy with a chance of Database DevOps

Similar to other sectors, the healthcare sector is making its way to the cloud with 42% saying they are using the cloud in some way – compared to other sectors like financial services and government, at 39% and 28% respectively. However, this number is sure to increase as more adopt DevOps processes and quarantine restrictions mean an increase in remote medical services.

What’s notable here is the strong correlation between cloud and DevOps adoption. Across all sectors, cloud usage rises by 5 percentage points among those respondents who have adopted DevOps, and they were less likely than non-adopters to say that their databases are hosted only on-premises. Looking back across all sectors from the Database DevOps Report, there was actually a small drop in the number of responders who report being a combination of cloud and on-premises, and a slight rise in those who say they are all on-premises between last year’s survey and this year’s survey. 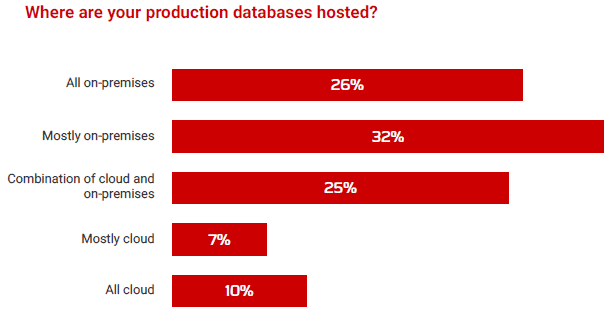 Get the full report

Over the last four years, Redgate’s annual report has provided valuable insights into how and why DevOps is being adopted, along with the drivers for introducing it for both application and database development, and the obstacles businesses and organizations in every sector face. Download the 2020 State of Database DevOps in Healthcare Report to see the full picture of how and why DevOps is being adopted across a rapidly changing sector. Also about State of Database DevOps