Since the release of the State of DevOps report by Puppet Labs ten years ago, various organizations have looked at how we could build better software. The generally agreed finding is the need to deliver more value to our customers, and how we can make the delivery of that value as smooth as possible.

For Redgate’s State of Database DevOps report, this year saw over 2000 participants from all over the world, of all different sectors, roles, and different stages of their DevOps journeys. The findings from this report were able to give us an insight into the state of database development and how that might relate to DevOps.

One of the key findings has helped us understand where frequent deployments come into play and how this can help organizations produce more value from their software: 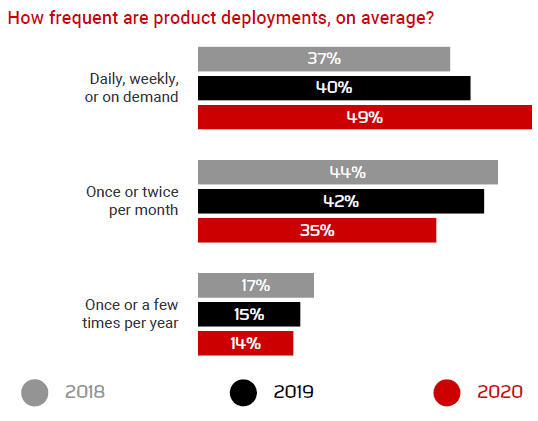 We can see from this graph that the frequency of deployments is increasing. More organizations are seeing the value of shorter release cycles. That isn’t to say that deployments have to take place daily or every week, rather that you should be able to deploy when you need to, on demand.

The biggest concern we see about increasing the frequency of deployments is the rise in risk. How can frequent releases improve the quality of the code? With testing, we often find this is delayed until we get near the end of the development process, which means it is crunched and not done as well as we would like, resulting in poor quality code. Operations are rightly going to be concerned that by releasing more frequently we will have more of the same issues in our systems. What we find in DevOps is the opposite thing.

It’s not a question of releasing those same deployments more frequently. Instead, with a low cycle time, there is less risk involved because there are fewer changes, and a smaller batch size. If we wait longer, the changes stack up to a deployment with a higher risk.

Microsoft is a good example. Visual Studio historically released once a year, or once every few years. The cycle time was large, meaning the number of changes was huge. Bugs would be apparent upon release almost immediately. Service packs to patch the system would not be released for months after, resulting in customers having to live with those bugs for months at a time. Now, we see Visual Studio updates more often, including database software updates, and monthly or bi-monthly patches with a far lower risk of bugs.

When working on a large deployment it’s hard to be agile or adjust what you’re working on. If you are making small, incremental, changes every week or every two weeks, adjusting priorities or changing focus becomes easier to line it up for the next release. Working in this agile way, software developers use tools like Agile, Lean, and Kanban, and database developers are starting to do the same. DevOps asks us to work in these small batches with short cycle times, and then refocus as needed.

Adapting what those changes include can also improve the maintenance of the code. Firstly, only making additive changes to software, and not deleting things where possible. This doesn’t mean avoiding clean-up, but in general, we want the changes made to be backwards-compatible, easily made changes that won’t interrupt the workflow. When it does come to clean up, by spreading the complexity out across multiple deployments over time, each one is a low risk operation and if there is an issue, it can be recovered from quickly.

Finding and fixing bugs are a source or pain for both developers and customers. Fixing those defects requires resources and time. The longer we spend fixing bugs, the more time is spent on rework, instead of value-added work.

The vast majority of developers are not good at reviewing huge amounts of code, things can get missed, focus is lost. Smaller deployments do help with this because we simply have less code to physically look at, and we are more likely to catch the defect.

Keeping releases frequent also ensures we have a better understanding of what is happening with that code, and the idea behind it. Meaning we can identify and find the fix quickly, ensuring customers deal with bugs for less amount of time. It’s harder to get into the mindset of code written two months ago as part of a larger release. 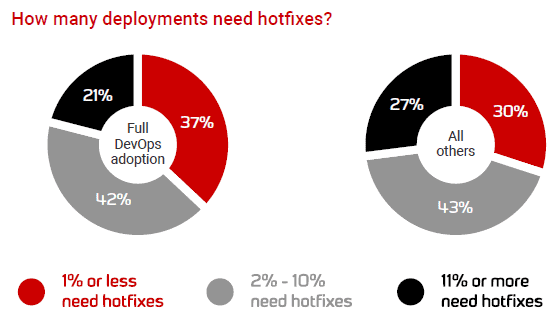 It’s worth emphasizing here that every percentage change increases the efficiency a great deal, because it means we’re not spending time on rework, we’re spending it on value, on new things that need to be done. Enhancements, improvements, and brand-new features. As we move to a DevOps process with smaller batch sizes and the agility to adapt to a changing environment, we find less hotfixes are required. Ultimately, delivering more value for our organizations.

To try and unlock more value from software means we must get more value work done, and we can do that really in two ways. One is by reducing rework, and the other is getting quicker feedback on our changes, which helps us focus in on things we want to do.

Releasing every week doesn’t mean spending only a week on that release. It could be three or four weeks, but in the meantime there’s other work that is getting released. As teams scale, there may be multi-week cycles, but that deployment is done with correct modelling, and with efficiently written code that tests well and adheres to standards so they can be released quickly. We want to follow all the best practices we can both on the application and the database side.

If you’re interested in speaking with Redgate about your DevOps initiative, get in touch now.

To find out more about unlocking the value of frequent database deployments, you might also like to watch the Redgate webinar hosted by Steve Jones which formed the basis for this article.

How to Enable Fast Database DevOps Adoption Across the Enterprise

As a DevOps Advocate at Redgate, I frequently work with Enterprise customers to help them transform their software development process for databases across their entire organization.

Introducing DevOps to the US Government – Part 2

In the first post in this series, I talked about the challenges for the US Government sector when attempting to introduce DevOps. The sector lags behind others such as Financial Services on every meas...