Chris Unwin describes a strategy, using data masking, cloned databases and PowerShell, which will allow you to sanitize data before provisioning test or development environments.

National and regional legislation, as well industry standards, dictate what an organization can and can’t do with sensitive data, as well as how it needs to be handled, audited and protected. In addition, the General Data Protection Regulation (GDPR) tightens up enormously the requirements for storage, handling, processing, disclosure and erasure of personal information about any EU citizen.

Fines for breach of GDPR regulations are enforceable as of May 2018, and are promised to be ‘dissuasive’ in size. This has brought the topic sharply to the attention of all organizations that handle any Personally Identifiable Data (PII) and Protected Health Information (PHI).

Whether an organization is a Data Controller or Data Processor, it needs to discover and classify any personal data it stores or uses as part of its various data processes, and then take appropriate technical measures to ensure that the data is protected.

This article describes a strategy, using data masking, cloned databases and PowerShell, which will allow you to sanitize data before it is copied or moved, for example from a production environment into testing or development environments.

Protecting data outside the production environment

Most of the time, during development and testing work, developers don’t need to work with real production data. Unit testing, for example, is served well by creating standard data sets that throw in the occasional troublesome name, or bizarre integer value, to flush out bugs.

Of course, there are many advantages to being able to test against real, or at least very realistic, data. Most developers will appreciate the difficulty of trying to troubleshoot a production bug that cannot be reproduced in any other environment. It is especially difficult to track down the exact cause when the application is distributed across complex, interconnected systems, comprising several technology stacks, and relies on a database that could run to many TB in size.

It helps to be able to eliminate as many variables as possible. Is the issue caused by some special characteristic of the data, in production? One way to prove or disprove this is to capture a data set from the production environment and load it into testing or development environments. With the data in test and development matching as closely as possible what’s present in production, the team will also be able to flush out many data-related bugs much earlier in development, and will gain confidence that their test results will reflect the behavior observed on deploying their changes to production.

This is all fine if you’re working with public data, but what if some tables contain data that is personal, identifiable, or is in some other way sensitive or private? Either you need to generate that data, rather than copy it, or you need a data masking or obfuscation strategy, which will prevent unauthorized access of this data, by replacing, anonymizing or removing sensitive pieces of information.

However, if you need to copy several terabytes of data to each of the required test and development servers by restoring a backup, while also sanitizing any personal and sensitive information, by running data cleansing scripts, then your database provisioning process will be long, slow and require a large amount of extra storage space.

SQL Clone allows you to rapidly spin up copies of a database, for development and testing purposes. It creates one image, which is a point-in-time representation of your source SQL Server database, and from this image you can create many database copies, or clones. Each clone takes up only tens of megabytes of disk space, and creating each clone takes seconds, rather than hours (see Getting started with SQL Clone for more details of how this works).

Data Masker for SQL Server allows you to set up a set of ‘masking rules’ to apply to any PII and PHI in your database. It also allows you to synchronize these changes between tables, across servers and even between SQL Server databases.

The key to understanding how these tools can work together lies within PowerShell; SQL Clone has a full set of cmdlets that allow you to create and remove images and clones, and Data Masker’s command-line interface can be called as part of this process. To set up the provisioning and masking process through PowerShell, follow these steps:

1. Discover and classify the data

Complete your own internal due diligence to discover what data you’re going to be providing to your teams and classify this data – What data is the most sensitive? Where is it? Which data elements could be used to personally identify the data subject (either by itself or by correlation with other data), or to place that subject at a specific place at a certain time?

Based on this, figure out what level of masking or data removal/generation you need for the various classifications of data in your database. 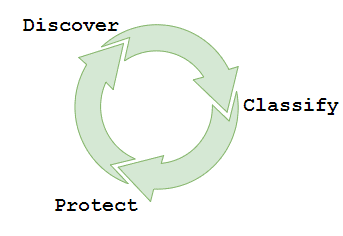 Feed this information into Data Masker for SQL Server. Data Masker allows you to predefine different types of rules (such as substitution or shuffle) on how each column and row should be anonymized. These rules run in sequence (or concurrently based on your rule dependencies) and form your masking set, which should be created in line with the columns and rows of data you have discovered in your tables.

In the following example, I am using a simple substitution rule in my masking set to replace the title, first name, middle name and last name in the Person table of the AdventureWorks database. 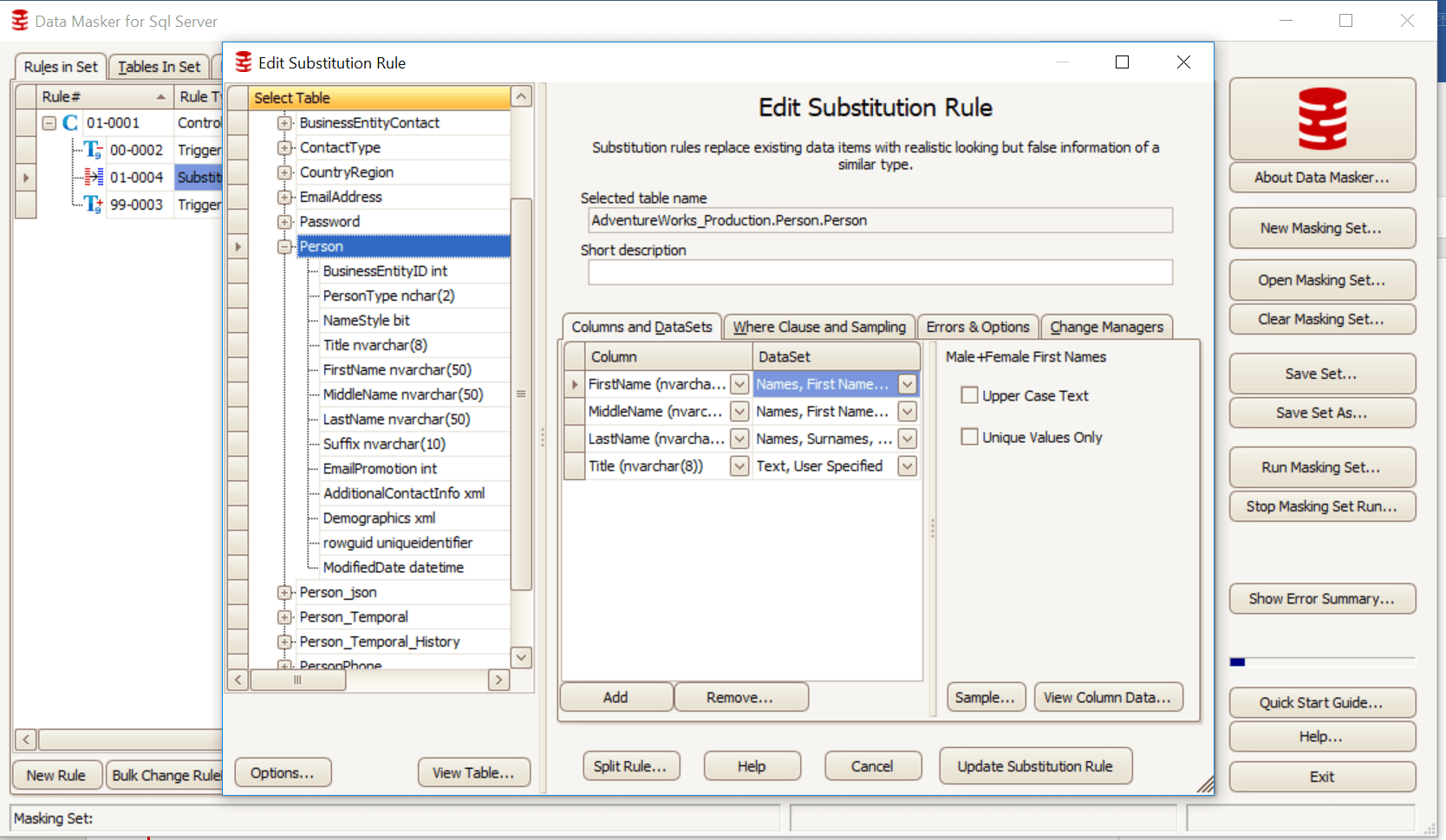 We use the PowerShell cmdlets with SQL Clone to set up a basic provisioning process.

All cmdlet references for SQL Clone can be found on our documentation site.

For this example, we will be using the cmdlets to connect to SQL Clone, set the locations of the Image and any clones, and the naming convention. The PowerShell code in Listing 1 provides the basis of the overall provisioning process, into which we can integrate our chosen data masking workflow.

a. Choose the data masking workflow

It is at this point you can implement your chosen workflow for masking. There are two basic approaches, either deploy all clones from a masked image (using method 1 or 3 below), or deploy unmasked clones and then mask them (method 2):

b. Apply the data masking

In this step, we pass the database or clone into Data Masker for SQL Server, to apply our masking scheme. We use the command line functionality within the tool as part of your PowerShell job.

The command in Listing 2 applies the masking set we created previously. The output is written to out-null so that the operation can finish before the script attempts to do anything else.

If you are using either of the approaches that applies the masking to a clone (1 or 2), then you will need to pass the clone name to use into this command also by using the -D argument which will replace the database specified in your existing masking set.

If you are using approach 3, you will be able to specify the name of the restored Database in the masking set and call this without the -D argument.

Listing 4 shows a full example of a masking process in PowerShell, with SQL Clone and Data Masker, which applies scheme 1, of masking a temporary clone, creating a new image and then provisioning dedicated clone environments for the development team from the masked image.

Figure 3 shows the Person table in the source database (left) alongside the sanitized clone.

Any organization that stores and handles personal or sensitive data will need to audit that data, and take steps to ensure that their databases and data processing systems meet the data privacy and protection demands of GDPR, and related legislation.

This article described an approach that will ensure that, when real data is required for development and testing work, or for analytics and reporting, any sensitive and personal data is masked when it leaves the security of the production database environment.