Stephanie Herr explains how to use the 'hybrid' approach in the Deployment Suite for Oracle to automate Oracle database deployments. This is where the team maintains the current state of the database in version control during development. then, at key stages, they generate and test the migrations script that will be used to deploy the new database changes safely.

The Deployment Suite for Oracle (DSO) helps teams version control their Oracle database changes and automate their deployment from version control. It integrates with your existing continuous integration and release management systems. The aim is to make these processes simpler, faster, more reliable, as well as more transparent to others in the organization, for governance and auditing.

The DSO gives teams flexibility to choose the way they want to work. We currently offer three different approaches to working:

The overall goals of releasing safer and quicker are the same regardless. In this article, we’ll concentrate on the hybrid approach, which offers the benefits of getting started quickly and having full control over the scripts that will be used for deployment.

We refer to this as a ‘hybrid’ approach because it uses a ‘state’ workflow during development, which maintains in version control only the state of the database, and then a ‘migrations’ workflow to generate and adapt the scripts that will be used for deploying those changes to other databases. The following diagram depicts the overall DevOps pipeline, with the ‘state’ workflows indicated in orange and the ‘migrations’ in green. I’ll describe each section in more detail as we work along the pipeline.

Figure 1 – This diagram shows the hybrid approach, which uses Source Control for Oracle for the state workflow (orange) and Redgate Change Control and Automation for the migrations workflow (green).

Source Control for Oracle creates and then maintains the DDL CREATE script for each object in version control. This provides teams with an audit of their changes (who, what, when, and why) and a safety net because they can easily get back to a previous version in their development database.

It also allows teams to have their own sandbox database to test database changes before committing them to version control. Source Control for Oracle is used to share these changes between team members. It allows teams to identify any conflicts for changes made to the same object.

Figure 2 – Developers use Source Control for Oracle to capture the state of the database as DDL CREATE scripts in version control.

For this work, teams should use Source Control for Oracle as they normally would. You can learn more about this at https://documentation.red-gate.com/soco/setting-up.

Some teams may want to keep an integration environment up to date with the latest DDL scripts in version control to perform and test CI builds throughout the development process. To do this, the team would setup a CI process to get the latest version from the repository and then use the Schema Compare for Oracle command line with these scripts as a source and the integration database as a target. Schema Compare for Oracle will auto-generate a script and update the target integration database schema objects to match what it pulled from version control. This gives you an integration database that is always in the latest state. If the target is an empty database, then this process will build the new version each time and the team can import the required test data.

In some cases, if you’re using a permanent integration database, then you may lose data if you’re renaming tables/columns since a comparison tool won’t understand that a rename happened and just drop the old column name and create a new column. The state-based approach can also fail if adding new NOT NULL columns to an existing table that has data if a default value is not specified. These changes might be OK for an integration environment where data preservation is not key, but are an important reason for why you should use the hybrid model that uses migration scripts for your real deployments to downstream environments like QA, UAT, Staging, and Production. 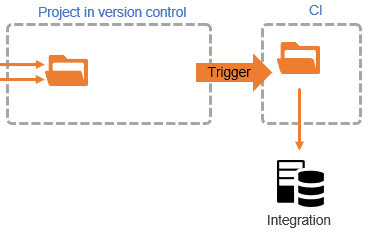 Figure 3 -Triggering a Continuous Integration build to update the Integration database based on the latest state of the objects in version control.

With a hybrid approach, teams will generate a migration script for deployment when the time is right for them. This could be when the work on a feature is complete, at the end of a sprint, or as part of a monthly/quarterly release process. At this time, a database specialist or a DBA will use Redgate Change Control to generate a migration script that will be used for deployment. The benefit of this is that the database specialist/DBA can see all the changes in version control that haven’t been included in a migration script yet. They can select the changes ready for this release. This is also known as cherry picking. The migration script will be generated by Redgate Change Control, which uses Redgate’s Schema Compare for Oracle technology behind the scenes. The database specialist/DBA can then modify/adjust the script as needed to have complete control over the what is run during the deployment. They can even add transactional data updates as well, if needed. This script is then saved in version control to be used for CI/CD.

To do this, a database specialist/DBA needs to do a few one-off steps to setup a Redgate Change Control project and prepare the database in the release pipeline. They should:

Now that your project is setup and using the correct development source (the development team’s Source Control for Oracle project) and the downstream environments in your pipeline are ready, follow these steps to generate new migrations to be used for your deployments. This will be the main workflow to follow when you are ready to generate a migration script for deployment. 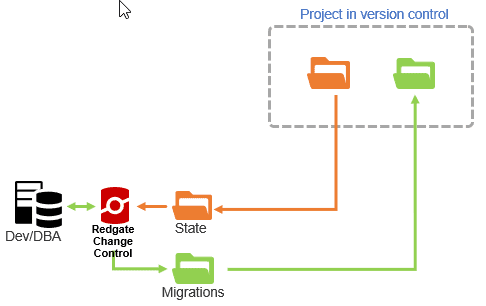 Now that your migration script is in version control (maybe on a release branch), this is the script that you’ll use to test your database deployments. Your CI process should deploy this to an integration environment where automated tests and checks can be run. To do this, use Redgate Change Automation, which is a cmdline that simplifies automating your build and release process and adds additional checks and reports to help make sure your releases are successful. 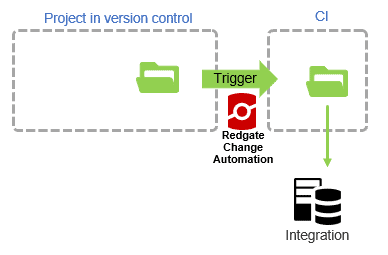 Redgate Change Automation has a few commands that will help with CI:

Once your CI processes are successful, then your release system can be setup to automatically deploy to the next environment(s) in your pipeline. Use the following commands in Redgate Change Automation to help with this:

See our documentation to learn more about the Redgate Change Automation cmdlines and worked examples to integrate Redgate Change Automation with CI/CD systems like Jenkins, Azure DevOps pipelines, and TeamCity and Octopus Deploy. These examples can be used to setup other CI/CD systems like GitHub Actions, GitLab CI/CD Pipelines, Bitbucket Pipelines, IBM UrbanCode, XebiaLabs, and more. If your system is not listed and you need help, please let us know.

We hope this helps you understand how you can use the Deployment Suite for Oracle to give developers a fast and easy way to version control their database object changes using Source Control for Oracle. Then, when the time is right, using a database specialist/DBA to generate a migration script that they have full control over for the release using Redgate Change Control. These migration scripts are versioned controlled and used by Redgate Change Automation in your CI/CD process to give you a repeatable and safe deployment to your downstream environments. The whole process can be customized to meet your needs and your release pipeline and can be setup with a manual intervention step that allows Production DBAs to easily review and approve changes as part of an automated pipeline.

If you have an initiative to automate your Oracle database releases in the next few months, we’d love to work with you to understand your needs and help with best practices. Please get in touch with the Redgate Oracle Team if you are interested in this or have any questions.