Phil Factor explains why you should prefer use of [NOT] EXISTS over [NOT] IN, when comparing data sets using a subquery. While there is no longer any significant performance advantage, using NOT EXISTS will avoid unexpected results when the subquery’s source data contains NULL values.

It used to be that the EXISTS logical operator was faster than IN, when comparing data sets using a subquery. For example, in cases where the query had to perform a certain task, but only if the subquery returned any rows, then when evaluating WHERE [NOT] EXISTS (subquery), the database engine could quit searching as soon as it had found just one row, whereas WHERE [NOT] IN (subquery) would always collect all the results from the sub-query, before further processing.

However, the query optimizer now treats EXISTS and IN the same way, whenever it can, so you’re unlikely to see any significant performance differences. Nevertheless, you need to be cautious when using the NOT IN operator if the subquery’s source data contains NULL values. If so, you should consider using a NOT EXISTS operator instead of NOT IN, or recast the statement as a left outer join.

A recommendation to prefer use of [NOT] EXISTS over [NOT] IN is included as a code analysis rule in SQL Prompt (PE019).

Which performs better: EXISTS or IN….?

There are many ways of working out the differences between two data sets, but two of the most common are to use either the EXISTS or the IN logical operator. Imagine that we have two simple tables, one with all the common words in the English language (CommonWords), and the other with a list of all the words in Bram Stoker’s ‘Dracula’ (WordsInDracula). The TestExistsAndIn download includes the script to create these two tables and populate each one from its associated text file. It is useful, generally, to have tables like these in your sandbox server, for running tests while doing development work, though the book you use is your choice!

How many words occur in Dracula that aren’t common words? Assuming there are no NULL values in the CommonWords.Word column (more on this later), then the following queries will return the same result (1555 words), and have the same execution plan, which uses a Merge Join (Right Anti Semi Join) between the two tables.

In short, the SQL Server optimizer treats either query in the same way, and they will perform the same too.

…or ANY, EXCEPT, INNER JOIN, OUTER JOIN or INTERSECT…?

What about all the other possible techniques, though, such as using ANY, EXCEPT, INNER JOIN, OUTER JOIN or INTERSECT? Listing 2 shows seven further alternatives that I could think of easily, though there will be others.

As the results show, although the queries look rather different, it’s generally just ‘syntactic sugar’ to the optimizer. However elegant your SQL, the optimizer merely shrugs and comes up with an efficient plan to execute it. In fact, the first four all use the exact same ‘right anti semi merge join’ execution plan, and all take the same amount of time. 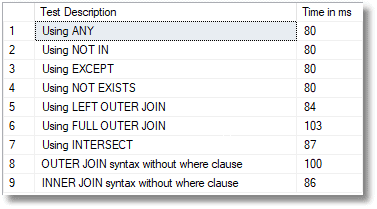 We’ll check for variation by running the test several times. The INTERSECT and INNER JOIN queries both used an inner merge join, and were close. The two FULL OUTER JOIN queries were a bit slower, but it was a close race.

The pitfall of NOT IN

There is a certain unreality in comparing sets with null values in them, but if it happens in the heat of everyday database reporting, things can go very wrong. If you have a NULL value in the result of the subquery, or expression, that is passed to the IN logical operator, it will give a reasonable response, and the same as the equivalent EXISTS. However, NOT IN behaves very differently.

The NOT IN query, before we inserted a NULL into @someword, and both the NOT EXISTS queries, all tell us correctly that 60385 words are not in our table variable, because three are, and there are 60388 common words in all. However, if the subquery can return a NULL, then NOT IN returns no rows at all. 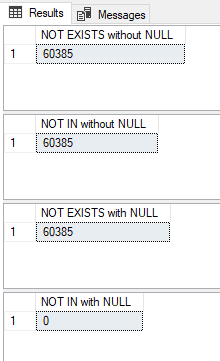 NULL really means ‘unknown’ rather than nothing, which is why any expression that compare to a NULL value returns NULL, or unknown.

Logically, SQL Server evaluates the subquery, replaces it with the list of values it returns, and then evaluates the [NOT] IN condition. For the IN variant of our query, this does not cause a problem because it resolves to the following:

This returns 3 rows, for the matches on the ‘z…’ words. The sting comes with NOT IN, which resolves to the following:

The AND condition with a comparison to NULL evaluates as ‘unknown’ , and so the expression will always return zero rows. This isn’t a bug; it is by design. You can argue that a NULL shouldn’t be allowed in the any column where you want to use a NOT IN expression, but in our real working lives, these things can creep into table sources. It is worth being cautious. So, use the EXISTS variant, or one of the others, or always remember to include a WHERE clause in the IN condition to eliminate the NULLs.