Avoid use of the MONEY and SMALLMONEY datatypes (BP022)

Use of the MONEY and SMALLMONEY datatypes can lead to unintentional loss of precision, due to rounding errors, during calculations. It is generally far better to use the DECIMAL, a.k.a. NUMERIC, type.

The MONEY data type confuses the storage of data values with their display, though its name clearly suggests the sort of data it holds. It is proprietary to SQL Server and allows you to specify monetary values preceded by a currency symbol, but SQL Server doesn’t store any currency information at all with the actual numeric values, so the purpose of this is unclear.

It has limited precision; the underlying type is a BIGINT or, in the case of SMALLMONEY, an INT, so you can unintentionally get a loss of precision due to rounding errors. While simple addition or subtraction is fine, more complicated calculations that can be done for financial reports can show errors. Although the MONEY datatype generally takes less storage, and takes less bandwidth when sent over networks, via TDS, it is generally far better to use a data type such as the DECIMAL or NUMERIC type, which is less likely to suffer from rounding errors or scale overflow.

A recommendation to avoid use of the MONEY or SMALLMONEY datatypes is included as a “Best Practice” code analysis rule in SQL Prompt (BP022).

Although MONEY can be represented with a currency symbol, this information isn’t stored. Under the covers, MONEY is stored as an integer data type. A decimal number, the more usual choice for storing a monetary value, can range accurately between -10^38 +1 through 10^38 – 1. Several sqillion!

The scientific world can tolerate tiny rounding errors and margins of error, but in finance a monetary calculation is either right or wrong. It is futile to argue that the odd cent or pence isn’t worth worrying about; I have, myself, been laughed at when I was a smidgen out from the right answer.

Take the calculation in Listing 1, which is the simplest I can think of that illustrates the problem.

Here are the results: 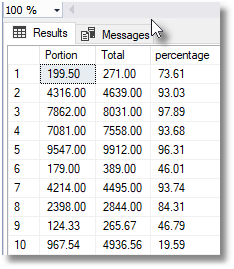 Notice the lack of any currency symbols for the Portion and Total values. The currency isn’t stored. It was useful in the VALUES clause because it indicated to SQL Server that it should parse the scalar literal values such as $124.33 into the MONEY datatype. Aside from that, though, are the percentage values correct? Let’s check that in Excel: 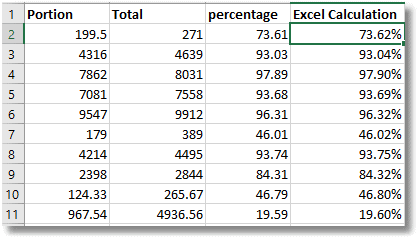 Hmm: doesn’t look quite right. Let’s rerun the calculation with decimal arithmetic (you’ll need to round the total or cast to numeric with a scale of two).

This time, the answers are the same as we saw in Excel: 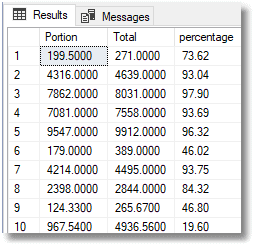 Incidentally, if you rerun Listing 2 but with the currency symbol in front of each of the values we’re inserting for Total and Portion, then you’ll still get the correct percentage values (under the covers, SQL Server implicitly converts the monetary values to DECIMAL (19,4) before inserting them into the table variable). 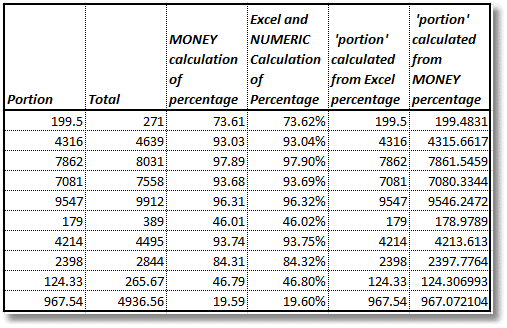 Other errors when using MONEY

You can also get scale overflow errors if you try to calculate correlations the classical way, when using MONEY values. The values stored in the intermediate sum of the squares calculations can get enormous, if you are trying to find relationships between monetary values and other variables over many rows. This will cause errors in the value of the correlation. If you cannot avoid the MONEY datatype then it is far better to use the built-in StDevP() aggregate function to get the correlation.

MONEY can be made to perform well and accurately if you know all the constraints and workarounds, such as using the NUMERIC datatype within calculations using division or multiplication, or employing the built-in aggregate functions. MONEY uses integers under the covers, so it is fast, and will generally use less storage, and is particularly suited to being transmitted across a network as TDS. However, it is for experts only.