Many production databases have failed embarrassingly as a result of INSERT code that omits a column list, usually in mysterious ways and often without generating errors. Phil Factor demonstrates the problem, and advocates a 'defense-in-depth' approach to writing SQL, in order to avoid it.

You can insert rows into a table without providing a column list, but this has no valid use at all. As a rule, you should avoid all temptation to make your SQL code shorter by leaving things out. There are always exceptions to every rule, of course, but the INSERT column list is so essential that I’d advise you to stop the build if SQL Prompt (BP004), or whatever static code-analysis tool you use, detects such a crime. At the same time, I’d advise a defensive and pessimistic attitude to writing SQL code that would naturally rear up at the idea of ‘chancy’ code that leaves out column lists. 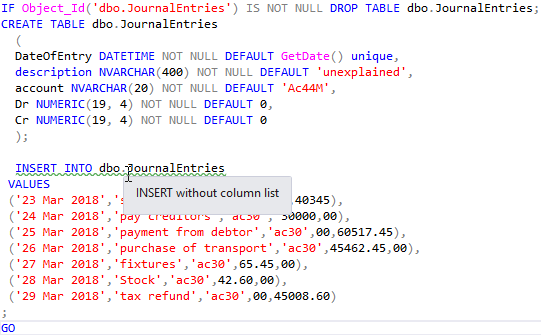 The Perils of the Blind Insert

Imagine that we have a Purchase table, and then tucked away in a stored procedure far away in the database code, some code that inserts into it the results from a derived table. Here, we’ll just insert some data from the ever-obliging AdventureWorks2016.

Changing the purpose of a column

To demonstrate that, we must imagine that the team leader suddenly realizes that that total column is redundant, and that he needs, instead, the ShipDate column.

Unfortunately, he forgot about the INSERT routine tucked away in a stored procedure. When it runs, it triggers no errors, but in the Purchase table you’ll find nastiness.

Some of those shipping dates ought to raise eyebrows. What’s happened? The value for total, which is a money datatype, has become a date. How? Two points here. Some developers think that SQL Server will check the column names of the result set from the table source against the column names of the destination table. No, it doesn’t. What is worse, if the data types of the columns in the source and destination don’t match, SQL code will do its best to obligingly convert the former into the latter, within the strict rules about when implicit conversion is allowed.

This is what has happened here: an implicit conversion turned data that is intended as a sum of money into a date. We can show it even more simply:

If you were to try it the other way around (popping a date into a money column), then you’d get an error because there is a rule disallowing this implicit conversion.

As the error informs us, we’d need to use an explicit conversion to convert a date into a sum of money

We’ve shown that the INSERT statement without a column list, the ‘blind insert’, is vulnerable to changes in a table’s columns, but even getting the column order wrong can cause calamity. Worse, you only get to discover this if the data doesn’t reconcile, because it can happen without triggering an error.

If the column into which you accidentally insert data is the same datatype as the intended column, only a well-constructed CHECK constraint would ever be able to save you from calamity. To demonstrate the point, we’ll create a journal table.

Now we add in some journal entries using a blind insert:

We can now see our balance.

In journal tables, entries are assigned to specific accounts using a FOREIGN KEY, and the journal keeps track of many accounts. In most countries, journal entries are entered in chronological order and debits are entered before credits. As such, someone decides that the credit (Cr) column ought to be before the debit (Dr) column:

There is nothing here to even indicate the order of the values in the VALUES statement, so it will take a while to spot the problem. Worst of all, you’ll get the blame rather than the dev who changed the order of the columns. Not specifying column names is fine for interactive work, but if you write code that relies on the hope that nothing will ever change, then refactoring could prove to be impossible.

Adding a column list will make it clear what column of the result set goes into which column of the target table, but how can you be certain that the order in the multi-row VALUES clause, or whatever other table-source you are using, matches that of the column list? Here, just as a suggestion, is a more defensive and maintainable way of doing it, by not only adding a column list but also documenting the intended order of the VALUES clause.

The extra specifications of the column lists do nothing more than to emphasize what the table source intended each column to be, and it is easy to check by eye that they actually do so. It is more like documentation.

As well as the obvious defense against this sort of thing happening, which is to specify the list of columns in order, you need constraints. Omitting them because you feel certain that they could never throw an error is like reasoning that smoke detectors aren’t necessary because they are so seldom triggered by smoke.

Now we test it out to see what happens

And of course, the alarm bells ring out immediately:

When someone makes a mistake like this, it is much better to allow it to trigger an error in testing than to leave open even a small chance it will get into production use.

The constraints in the journalEntries table would be much more dependent on the business rules in place for the business, and it is more usual for a trigger to pick up an unusual deviation from a baseline for the balance.

Just because you can leave out the column list in the INSERT statement, it doesn’t mean you should. It will introduce a fragility into your code that at some time will catch out either you or, more importantly, whoever must cope with your code, subsequently, as it’s likely to fail in ways that are hard to predict or to detect retrospectively.

After many years of experience, I’ve seen the most extraordinarily unlikely things to go wrong. The wildest and most fantastic CHECK constraint conditions get triggered, and exceptions that seem impossible will always get their day of glory, written in red letters on your screen.