Getting started with SQL Doc and PowerShell

Phil Factor uses PowerShell and SQL Doc to automatically generate database documentation, and update it on every successful build.

SQL Doc keeps everyone in the development team informed about a database. It provides more information than what is in source control, including server settings, and it formats and color-codes the information so that it is as easy to read as possible.

It generates the source of all of the metadata of a database, along with a list of the settings. It also allows you to attach comments as extended properties to any item of metadata, such as the database itself, tables, views, and functions. All these comments are saved in the database and are displayed alongside the item of metadata to which they apply.

You can generate the documentation in a variety of formats, from help files, Markdown files, Word documents, or an intranet site of HTML files.

It has a command line interface that enables you to run PowerShell scripts that automatically generate database documentation. This feature is often used to update the documentation automatically on every successful build so that the team can view the source of the database with the confidence that it represents the latest build.

There is also some extra functionality that is only available in the command line such as documenting all the databases on the server, or getting help for using SQL Doc at the command line.

The easiest way to get started using PowerShell with SQL Doc is to simply tell SQL Doc the name of the server and database that you want documented. Assuming that you are using integrated security, and you have all the necessary permissions, then Listing 1 will do the trick. Just change MyServer to the name of your server, MyDatabase to the name of your database, and amend the path in the Alias to point to your installation of SQL Doc.

Well, that’s all there is to it. It will whirr away and produce an HTML report, placed in ‘Documents\My Database Documentation\‘ directory. 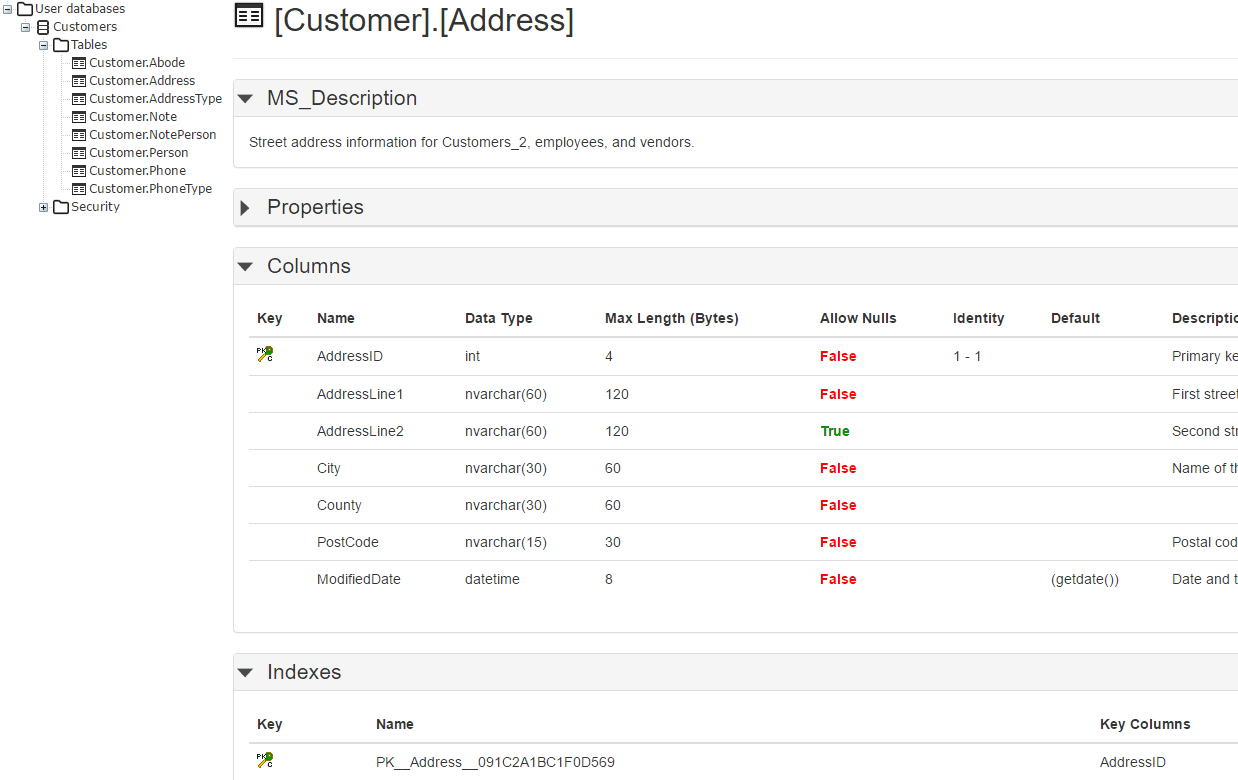 Or, if you’re feeling reckless, all of them:

Now, you need merely inspect the Options table at the end of the article, and try out all the other switches. I can guarantee that you’ll get what you want, eventually. Eventually!

But do you really want an HTML report placed in the ‘Documents\My Database Documentation\‘ directory? Do you want everything put into the report, including such things as permissions? Are the titles, credits and so on what you want? You can set all of these with individual switches but once you feel the limitations of this sort of simplicity, it is time to use a template instead.

Using a template to set up a documentation project

When using PowerShell with SQL Doc, you can, if you prefer, use an existing SQL Doc project file (.sqldoc). This file is an XML document that contains information such as the connection details and objects to document. This can be used directly by SQL Doc to repeat the document generation process either through the user interface, from scripts, or from PowerShell.

If you specify the path to this project file, SQL Doc will use these values as defaults. You need then pass only those values that are different from those contained in the file, if any.

This allows you to repeat exactly the document generation process but not the insertion of documentation. Just use the command line to generate documentation exactly as it is defined by the project file, specifying the /project option. In PowerShell, this will look as shown in Listing 4.

Figure 2 shows some sample output from a PDF documentation report for the AdventureWorks database, generated from a project file. 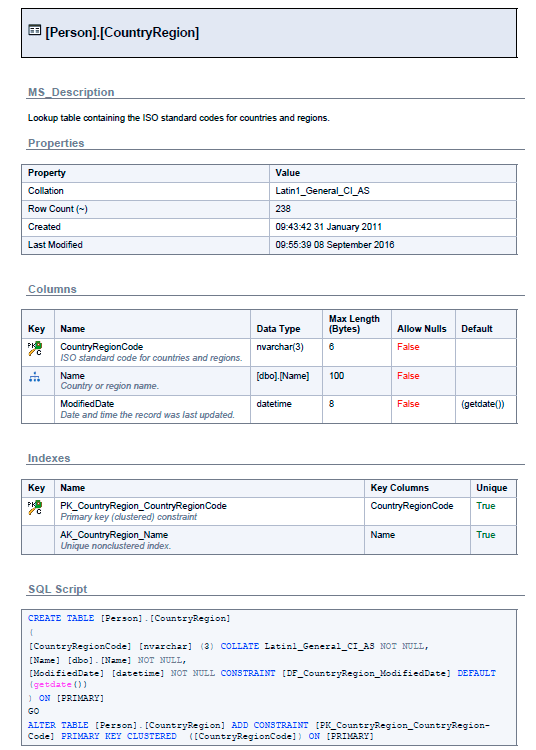 Using a project file as a template

Specifying the server and databases

Otherwise, you can specify the password with /password. This isn’t advisable, but we’ll show you how to get around that by registering the server in SSMS.

It is perfectly simple to specify your single server and database, as shown in Listing 6.

It’s not much harder to specify several databases:

Or even all of them:

If each database is on a different server, the simplest technique is to provide them as a list.

You could, of course, add UserIDs and passwords but I wouldn’t advise it because keeping passwords in scripts almost always ends in grief.

Instead, Listing 10 shows how to get the authentication from your registered servers. You can register any number of servers in your installation of SSMS, and your credentials are kept securely as long as you don’t leave your workstation while logged-in.

The PowerShell looks more complicated, but it saves a lot of time if you have a lot of documentation to do, and it is a script that you only have to write once, since you don’t have to change the script whenever you change password or UserID.

When you enter a command line, the order of the options doesn’t matter. Separate an option from its values using a colon. The colon must not be followed by a space; values that include spaces must be delimited by double-quotes. For example:

And remember, if you’d like to explore SQL Doc further, you can download a 14-day, fully-functional free trial.