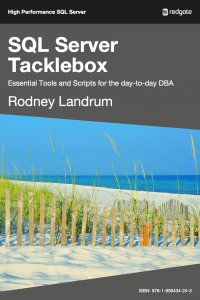 For the day-to-day DBA, there are dangers around every corner; monsters waiting to strike down the unsuspecting database with a resource-hungry query, an inefficient data load, or even outright data corruption. When the worst happens, and SQL Server is down, or performance is suffering, customers are quick to complain.. During such difficult periods, you, the DBA, are the centre of attention. Suddenly, three or four people crowd your desk, laser beam focused on your every action, fully expecting you to solve the problem quickly.

The success of your career as a DBA depends largely on how well-prepared you are to deal with such situations. Without verified backups, sound server documentation, and a ready supply of tried-and tested troubleshooting tools, there is no safe place to hide when the monster rears up. All you can do is buy some time, patch things up as best you can and then duck away into your cubicle, which, if you lost any data in the process, may soon be empty.

However, with the tools and techniques provided in the SQL Server Tacklebox, you will be fully-equipped to fight back. Inside, you’ll find scripts that will allow you to automate and standardize SQL Server installation, document and report on your servers, migrate data and manage data growth, troubleshoot performance issues, receive notifications of impending danger, secure access to your servers and fight off data corruption.

In short, you’ll be able to respond quickly and professionally to the many issues that blight the waking, and often sleeping, hours of the DBA. Then, one day, who knows? That cubicle may turn into an executive office with wall-to-wall tinted windows revealing a flowing brook outside, where no monsters live.

Rodney Landrum has been working with SQL Server technologies for longer than he can remember (he turned 40 in May of 2009 so his memory is going). He writes regularly about many SQL Server technologies, including Integration Services, Analysis Services, and Reporting Services. He has authored three books on Reporting Services. He is a regular contributor to SQL Server Magazine and Simple-Talk, the latter of which he sporadically blogs on about SQL and his plethora of geek tattoos. His day job finds him overseeing the health and well-being of a large SQL Server infrastructure in Pensacola, Florida. He swears he owns the expression “Working with Databases on a Day to Day Basis” and anyone who disagrees is itching to arm wrestle. Rodney is also a SQL Server MVP.