Working with the INSERT statement in SQL Server

The INSERT statement in SQL Server is versatile. It now allows the insertion of multiple rows of literal values. It also provides the output clause that solves a number of common problems such as ascertaining the value of identity fields, and other calculated fields in tables, or for auditing the rows that are added to tables. Robert, once again, gives a clear introduction.

In this article, I explain how to use the INSERT statement to add data to SQL Server tables. The examples I show are based on the AdventureWorks2008 sample database, installed on a local instance of SQL Server 2008. However, you can run most of these examples against the AdventureWorks database in SQL Server 2005, with minor modifications, such as changing the database name. Where appropriate, I note which features are not supported in 2005.

In a basic INSERT statement you must specify the name of the target table and the data values you want to insert into that table. When necessary, you should qualify that table name with the name of the server, database, or schema.

To demonstrate how to create a basic INSERT statement, I first used the following code to create the SalesStaff1 table in the AdventureWorks2008 database:

The table itself is fairly straightforward, and so is the INSERT statement necessary to add a row of data. The statement requires the INSERT keyword, the name of the target table, the VALUES keyword, and the values to be inserted, as shown in the following example:

That’s all there is to inserting a row into a table. However, as is often the case, you might want to add multiple rows to a table in a single statement. Prior to SQL Server 2008, this was not possible, but now the INSERT statement let’s you specify multiple rows, as shown in the following example:

As you can see, you must still specify the INSERT keyword, the name of the target table, and the VALUES keyword. However, instead of a single set of parentheses, you now have a set for each row to be inserted into the table. The value sets are then separated with commas. Now when you run the statement, all four rows will be added to the SalesStaff1 table.

The examples in the previous section are INSERT statements at their simplest. They assume that you will add one value to each column in the table for each row you plan to insert. However, it’s not always that easy. In many cases, you’ll want to insert values into specific columns, but not all columns. For example, if you have an IDENTITY column, you might not want to insert a value into that, but instead allow the database engine to generate the next value automatically. However, the INSERT statement, as it is used in the previous examples, requires one value for each column. If you do not specify an appropriate value for each column, you will generate an error.

To address this issue, the INSERT statement supports an additional component that lets you specify which columns should receive values. The values you specify are then inserted into those columns. Columns that are not specified are assumed to generate their own values, as is the case with IDENTITY columns, calculated columns, or columns for which a default value has been defined.

For example, the following code creates the SalesStaff2 table, which includes columns that do not require values to be explicitly added:

As you can see, StaffID is an IDENTITY column, FullName is a calculated column, and ModifiedDate has been defined with a default value (retrieved through the GETDATE function). Now let’s look at an INSERT statement that provides values for the other three columns-StaffGUID, FirstName, LastName:

Notice that I add the list of columns after I specify the INSERT INTO keywords and the name of the target table. The columns are enclosed in parentheses and separated with commas. The data that I specify in the VALUES clause must then correspond to these columns. In this case, the VALUES clause includes three values. The first is the NEWID function, which generates a GUID for the StaffGUID column. The second value, Stephen, is inserted into the FirstName column, and the third value, Jiang, is inserted into the LastName column.

As you’ve no doubt noticed, I’ve added a SELECT statement after the INSERT statement in the example above. The statement returns the values that were generated automatically when I inserted the rows, as shown in the following results:

That’s all there is to adding data to specific columns. You simply provide the name of the columns that should receive values and then you specify those values. You can specify the column names in any order. Just be sure that the data in the VALUES clause corresponds to the column order. Now let’s look at what happens when you don’t explicitly define your values.

In the previous examples, the VALUES clause includes a set of values that are enclosed in parentheses and separated by commas. But you don’t always have to explicitly specify the values. You can instead retrieve the values through a SELECT statement or through a stored procedure. To demonstrate how this works, I first created the SalesStaff3 table, shown in the following code:

Suppose I want to insert data into the SalesStaff3 table that I retrieve from the Sales.vSalesPerson view in the AdventureWorks2008 database. Instead of specifying a VALUES clause, I can specify a SELECT statement that retrieves data directly from the vSalesPerson view, as shown in the following example:

Notice that the CTE retrieves data from the vSalesPerson view. The SELECT statement in the INSERT statement then retrieves the contents of the CTE, as it would retrieve data directly from a table. That data is then inserted into the SalesStaff3 table. The final SELECT statement confirms that the data has been added, as shown in the following results:

Instead of using a SELECT statement to retrieve data, you can call a stored procedure in your INSERT statement. For instance, the following stored procedure-spSalesStaff-retrieves data from the vSalesPerson view:

I can then call this stored procedure from within an INSERT statement, as shown in the following example:

Notice that in place of a VALUES clause or SELECT statement, I’ve included an EXECUTE (EXEC) statement that calls the spSalesStaff stored procedure. When I run the INSERT statement, the procedure is executed and the returned data is inserted into the SalesStaff3 table. The following results confirm that the data has been inserted:

As you can see, inserting data through a SELECT statement or stored procedure provides a simple way to add multiple rows to a table, without having to explicitly define each value.

I first declare the @InsertOutput variable and configure it with two columns: StaffID and FullName. These two columns correspond to the same two columns in the SalesStaff3 table used in the examples in the previous section.

NOTE: For a full discussion of the OUTPUT clause, see the Simple-Talk article “Implementing the OUTPUT Clause in SQL Server 2008” (http://www.simple-talk.com/sql/learn-sql-server/implementing-the-output-clause-in-sql-server-2008/).

After the INSERT statement, I include a SELECT statement to verify that the data was inserted into the SalesStaff3 table. The statement returns the following results: 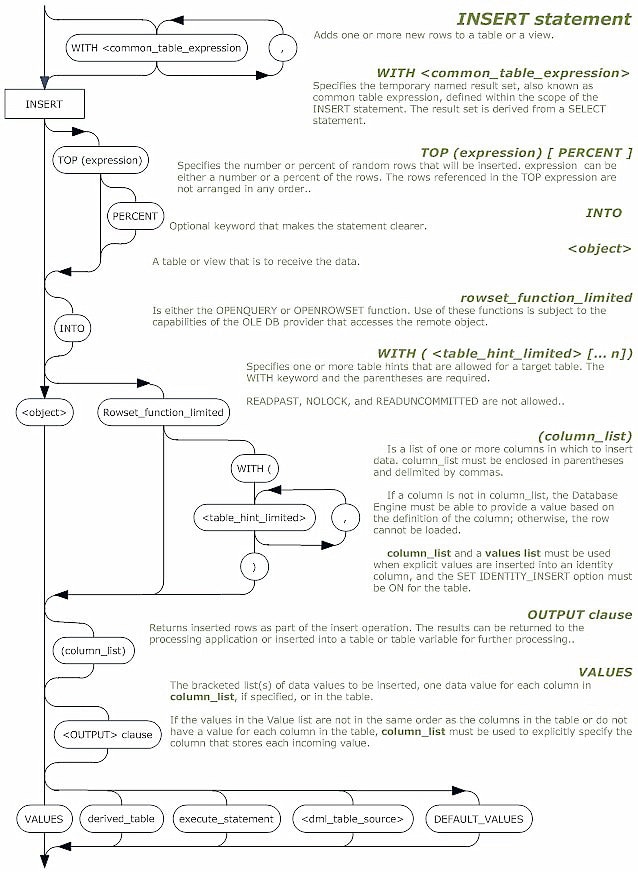 We have supplied the full-size railroad diagrams for the INSERT and OUTPUT clauses as PDF files which can be downloaded below.

The most flexible way to bulk-load data into SQL Server is to use SSIS. It can also be the fastest, and scaleable way of doing so. There are three different components that can be used to do this, using SSIS, so which do you choose? As always, Rob Sheldon is here to explain the basics. … Read more