An Introduction to Real-Time Communication with SignalR

SignalR, from Microsoft, solves many of the problems that come with developing web applications that need a communication channel with the server that is effective on a variety of server and client configurations. Christos Matskas gives an overview of the library and its potential.

SignalR is an open source web library developed by the Microsoft ASP.NET team. It is used for creating real-time communications in web applications. In this article, I’ll give a broad view of SignalR and describe why and when to use it.

SignalR can be used wherever a user would be required to refresh a page in order to see up-to-date data. It allows the server to logically ‘push’ data to the client. This is typically required for web-based dashboards and monitoring tools where information needs to be kept up-to-date at all times without the user having to refresh the page. SignalR is a powerful, high-level library that abstracts a lot of the underlying complicated technologies in order to provide an easy way to transmit data between the client and the server. SignalR manages the connections automatically and allows data to be sent using either broadcasts or unicasts.

In SignalR, there are two distinct models for implementing client-server communications:

SignalR is able to accommodate both new and older technologies on the client and the server by selecting the most appropriate communication protocol to use.

Client SupportSignalR can be used both on web and desktop applications. The web library has a dependency on the jQuery library and if there is a need to use older versions of SignalR, then it’s important to note that there is also a need to use a specific version of jQuery. NuGet should resolve these dependencies automatically. Besides the tight coupling with the jQuery library, the following Web browsers are supported:

The default model for SignalR is a one-to-many configuration where one server can connect and handle multiple clients. However, at some point, the server may become a bottleneck if there are too many connected clients and messages. At this point there are a few implementation settings that can be tweaked to deal with application performance issues:

However, some of these settings and code implementations are not guaranteed to solve all the performance issues, and it’s likely that the application may still be struggling. In this case, there are two further options:

You can get breathing space by scaling up, and it will possibly resolve the performance issues. In addition, if the SignalR application is running on the cloud and there is a specific, proven, pattern that shows utilization (CPU and Memory) spikes during certain periods throughout the day, then a scheduled scale-up/down can be implemented to reduce the costs of running on more expensive hardware. Nonetheless, there is always the possibility that this is only a temporary patch and the performance issues may outgrow the suggested solution. What is more, with one server handling the entire load, there’s still the risk that comes from having a single point of failure. This is where there is an advantage from scaling out.

Instead of throwing bigger, faster, hardware to the problem, you can use multiple, concurrent nodes to share the load and provide both redundancy and stability to the platform. Scaling out introduces a new problem because the clients can get routed to any server at any time, thereby breaking the connection and message continuity. To address this issue, SignalR needs to use a backplane. The backplane component is used to keep all servers in sync so if Client-A sends a message to Server-A, then a response may be received by any of the servers connected to the backplane as per the example below: 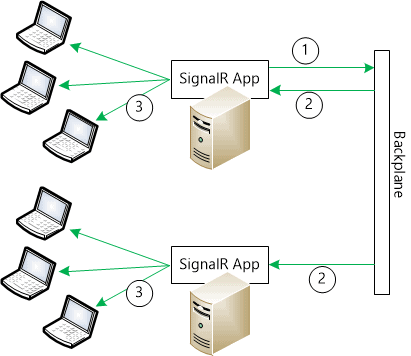 SignalR supports one of three scale-out backplanes depending on the requirements of the project:

Azure Service Bus can only run on Azure. Redis can be deployed to any standalone server (Windows or Linux). However, there is an option to use the Azure Redis solution to deploy the backplane on the cloud. Finally, the SQL Server backplane requires SQL Server 2005 or later and neither SQL Server Compact, Express nor SQL Azure are supported.

Connections are made persistent for the life of the session. Both server-hub and client have internal implementations for managing the connections automatically. By abstracting and hiding away these implementations, SignalR scores points both in simplicity and usability. Nonetheless, if you need more, the API has a way of exposing connection events to enable developers to respond accordingly in the code.

For some applications, connections must be mapped to specific users. A legitimate case would be to map user login credentials to the SignalR connectionID in order to route messages to specific users for security and integrity purposes. SignalR version 2 can manage and persist user and connection mapping using 4 different approaches:

The table below provides a breakdown on the benefits of each approach:

If reliability and persistence are, even after restarts, important for your application, then you must use only the permanent external option. More information on SignalR connection mapping and user persistence can be found here: http://www.asp.net/signalr/overview/guide-to-the-api/mapping-users-to-connections .

We have looked into the different features of SignalR and discussed what makes this library so powerful and versatile. SignalR is excellent for implementing robust real-time communications that perform well on web, desktop and mobile applications. In the next article, we will look into how to set up – and start using – SignalR applications in our code.