The Bejeweled Puzzle in SQL

Alex Kozak provides another SQL puzzle to hone your SQL Skills with.

Many DBAs and developers, at least those that have their servers and applications well under control, may be familiar with the popular, and rather addictive, PC and Xbox games such as Bejeweled and Jewel Quest. They belong to the group of ‘match 3’ puzzles that are played on grids of different sizes, though typically 8×8. The grid cells are filled with tokens, such as gems or coins, of various shapes and colours and the basic idea is to create horizontal or vertical rows containing a minimum of three matching tokens, by swapping adjacent tokens in the grid. For example, in the ‘bejewelled’ puzzle shown in Figure 1, we can create a sequence of three blue stones in the second row of the grid by swapping the highlighted red stone with the blue one directly below it: 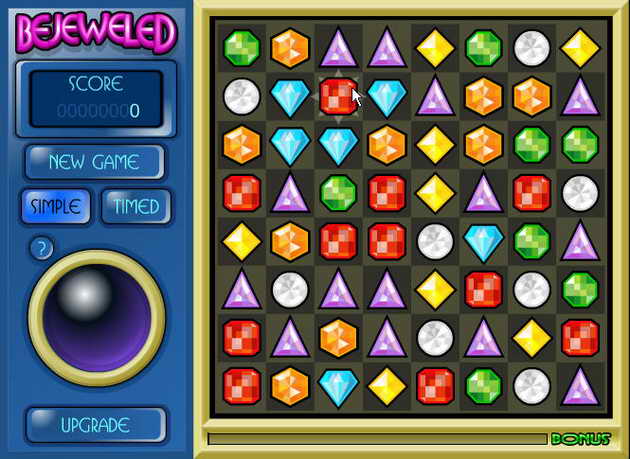 All swaps must be done vertically or horizontally and only swaps that create a sequence of at least three tokens of the same kind, in a column or row, are permitted. When a successful swap is made, the sequence of collected tokens disappears, creating holes (gaps) in the grid. The tokens above these holes immediately cascade down to fill these holes, in turn creating holes in the  top cells in the corresponding columns, which are filled by randomly-generated new tokens. The more tokens a player can make disappear in a single swap, the more points the player gets and the faster he can advance to the next level.

It occurred to me that it would be a very interesting challenge to recreate a bejewled-style puzzle and solve it using SQL!

The blue numbers from 1 to 9 symbolize nine different types of tokens. In this case, we are dealing only with a fixed grid, rather than one that continually adds randomly-generated tokens, but the goal is similar: you must swap adjacent tokens to create an island of three or more identical numbers in a row or column. For example, if you swap the values of columns 1 and 2 in row 1, you will create a sequence of three 8’s in column 2 (rows 1, 2 and 3).

So, here was the challenge! Using SQL or Transact-SQL, you needed to find all of the possible moves (horizontal and vertical) for the snapshot of Bejeweled table shown in Figure 2.

You had to  present your solution in the following format:

You did not need to show where to move the value of the specific cell. Just show what value to move, and from what cell it should be moved.

There were no constraints on how you coded the solution: you could use any SQL and Transact-SQL statements, commands and build-in functions. SQL Server version-specific solutions (for instance, for SQL Server 2008 only) were also allowed. However you did it, you had to present your SQL code, along with a brief explanation of algorithm / implementation you used.

The script in Listing 1  allowed you to create and load table bejeweled:

There were three winners:

Timothy Walters’s solution is very simple and elegant. Almost all of the logic has been implemented in the lookup table and that makes the solution portable and flexible.

In addition, his solution can be easiely modified in order to show the directions of the moves by adding one more column to the offset table.

Here is how it can be done:

There is one more person – AmandaS that should be specially mentioned. Her second solution was very similar to Timothy Walters’ and Ryan Randall’s solutions, but was submitted five days later.

A few more people should be mentioned as well:

Alex Kozak is a Senior DBA/Analyst working for SAP Canada. He has more than 15 years of database and programming experience. Microsoft has included some of his articles in the MSDN Library.

View all articles by Alex Kozak

When I read the list of new features in SQL Server 2019 I became very proud of my crystal ball powers. In July 2017 I published an article about Graph Database feature in SQL Server 2017. In this article, besides showing the improvements and benefits I also highlighted one problem: the lack of graph edge … Read more

Views in SQL Server are used to simplify writing queries and managing security, but’s it’s easy for views to eventually get out of sync with the underlying tables. In this article, Edward Pollack shows how to overcome this problem. … Read more