Many times I’ve been told, by developers who are using live data to develop a database, that it is impossible to anonymise or pseudonymize their data to comply with privacy legislation. One recurring explanation is that one can’t duplicate the distribution of data by faking it. In a sense, this is true, because if you change data you always upset some part of it, such as the number of people called ‘Nigel’, living in Montana. However, this is likely to be a minor inconvenience compared with the risks of exposing personal, financial or business data. Other than this, it is relatively easy to have as much data as you want that looks convincing and conforms to the distribution of the real data. Not only that, but to do it, you need never have access to the real data. All you need to know is the distribution of data

Let’s take a simple example. Imagine that you need to have a number of fictitious countries for your database. You feed in the actual countries and you get out fictitious, randomised, countries. Actually, you get fifteen percent of real countries and the rest are fictitious, unless you filter out the real ones as we will be doing. This is a tweakable algorithm.

Let’s do it in a simple batch and see what happens. I’ll explain later.

The results are like this but different every time, and all in a different order.

How did we do this? We started with a table that took each word, added two spaces at the beginning and a |, followed by two subsequent spaces, at the end. This allowed us to map the frequency of each three-letter combination in a collection of words. Any language is made up of common combinations of characters with a few wild exceptions. For words to look right, they must follow this distribution. This distribution will change in various parts of a word, so you need all this information.

So what would happen if, instead of feeding the name of countries into the batch, we do the names of people?

We can pull them from a file, one name per line, like this (changing the path to the file, of course)

…and so on. The more data we use for our Markov table, the more convincing the generated strings. The drawback to this sort of data generation comes for the person who has a very uncommon name with unusual combinations of characters.  It might be possible to detect from the generated names that this person was on the original list. This is something we have to deal with later on by detecting and eliminating outliers , but I’ll explain that later in this series.

So how do you choose randomly in a way that matches this distribution?

Here is the algorithm sketched out in SQL

This will give you a different result every time you try it, but you’ll see that the results stay close to the original distribution of answers. This is just a sketch of the algortithm, and you’ll notice that there is an easier and quicker way of doing the join, but we’ll demonstrate that later on in the article, once we go set-based. 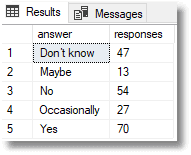 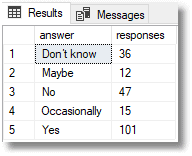 We will use this principle to choose the first three characters for our words, which for empty strings will be spaces and an end-stop, which are subsequently removed. For subsequent characters we can use the Markov data. What characters will be likely to follow the preceding two at a particular position in a word? We can even adjust the choice according to the probability, though this is likely to generate more of the original strings.

Here, as an example is the distribution data for the fourteenth position in the string. 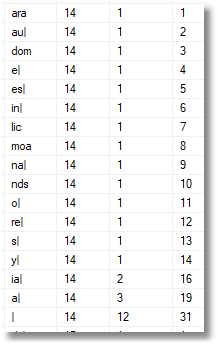 The second column gives the character position in the string. The first column gives the three-character trigraph. At this stage, whatever the last two characters in your string may be, you have no choice: it is a simple lookup. If they are ar, then the next character must be ‘a’, if au, then you can only have l, and so on. If there had been two or more trigraphs starting ar or au then you would be able to roll the dice to decide. The column on the right after the frequency of the trigraph is the running total. We need this to select the appropriate character. The design of the Markov table I use has more information in it than is strictly necessary for the algorithm I’m using, but it allows you to try out different techniques according to the requirements you have. I select the third position in the string to start and select the entire trigraph randomly based on its frequency, because that will give a good approximation to the distribution of the original data. Then I select each character in turn entirely randomly so as to get a livelier divergence.

We don’t much like iteration in SQL Server, in fact we don’t like it at all. However, any process that relies on random number presents difficulties, and we need to resort to modest trickery. We use a view that is as precious to keen data-spoofers like myself as a number table or calendar is to other SQL Server developers. It is a simple thing.

This gives the result …

…which tells us that our distribution almost exactly matches the one we originally specified. We can now fake a questionnaire very closely!

One huge advantage we now have is that we are allowed to put this in a table-valued function. We can’t do this with anything that has the rand() function because there is a risk to having functions that don’t return the same outputs for the same input. They restrict optimisation. By cheating we run a risk because we now have a function that has to be executed afresh every time. This, however, is what we want.

So with, health warnings, here is the table-valued function. Here we are working to percentages rather than actual figures for the distribution.

So, we now seem to have an effective way of generating all sorts of data, and, in particular, the names of things for pseudonymizing data. At this stage, we have plenty of questions still. How effective is it for rule-based strings such as book numbers or postcodes? Just how far can we use this algorithm to generate data? How can we, in practical terms, do the work? How can you generate convincing data without seeing the original data? How do you generate continuous as well as discrete distributions?