Getting normally-distributed random numbers in TSQL

When you are creating test data, you will, at some stage, hit the problem of simulating a distribution. There are plenty of different distributions. In the real world, variables such as height, rainfall, or examination  results conform to a Normal or Gaussian distribution, where the mean is the median, and variables are more likely  to have their values  close to the median.  The natural world is full of examples of variables that conform to the normal distribution, and exhibit the easily-recognised bell-curve when graphed by frequency. This is because the final distribution is the sum of a number of factors that are subject to chance variation.

Were you to have, for example,  a cat database that included their weights, and wanted to get some data in there to simulate real data, you might think of using the RAND() function. This would end up giving you a ‘flat’ or ‘Uniform’ distribution, providing you a range including microscopic cats at the same frequency as cats the size of tigers, with an equal chance of everything in between. This is quite unlike the experience of a normal vet’s practice. No. You would probably want a normal distribution though if you were specialising in cats with weight problems, it would be skewed.

Male cats average around 2.8 Kg for a male and 2.4 Kg for a female and we guess at the standard deviation in both cases being around 0.5 Kg. You don’t have the problem of getting these figures because you can get the mean and standard deviation from the production data via a simple SQL Call.

Here, in the following SQL, we have used the values for  male cats. We can now generate the data for them

And here are the values of the population that we’d expect.

…and the characteristic bell-curve 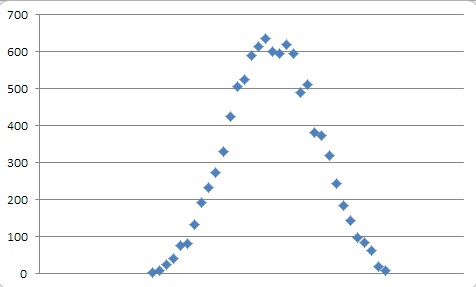 What, I hear you ask, about the Box-Muller transform? Surely this will give a better result? OK, we’ll do them together and see.

There you have it. Nothing much in it but I reckon that my version gives a consistently better standard deviation

So we would have two populations, depending on the sex of the cat and each time we wanted a value, we’d use the SQL Call with the correct mean and standard deviation. Three calls to RAND() will be the minimum to give you the normal distribution. You can add them, of course to get it even finer but this is good enough for me.

There are, of course, plenty of other types of elliptical distributions and then there is the Pareto distribution which corresponds to the way wealth tends to be distributed. Most distributions will be skewed so that the mean and median don’t correspond. Beyond simple distributions such as these, the mathematics begin to get rather complex so we’ll leave it there for this blog. For more details on the various types of non-uniform distributions see Dwain Camps’ excellent article on the subject on SQL Server Central called Generating Non-uniform Random Numbers with SQL

0 1
Originally published on 21 August 2020 as “Understanding digital transformation & how it transcends to driving organizational growth“, edited by Louis Davidson including updated references. IDC report forecasts that global spending on enterprise applications will rise from $279.6 billion in 2022 to 385.2 billion in 2025. Nearly all of this will be in public cloud … Read more
0 1