It is dangerous to assume that your data is sound. SQL already has intrinsic ways to cope with missing, or unknown data in its comparison predicate operators, or Theta operators. Can SQL be more effective in the way it deals with data quality? Joe Celko describes how the SQL Standard could soon evolve to deal with data in ways that allow aggregation and windowing in cases where the data quality is less than perfect

Dr. Codd introduced the term “theta operators” in his early papers for what a programmer would have called a comparison predicate operator. The large number of data types in SQL makes doing comparisons a little harder than in other programming languages. Values of one data type have to be promoted to values of the other data type before the comparison can be done. SQL is a strongly typed language which means a lot of type castings are not possible – you cannot turn Christmas into a number and find its square root.

The comparison operators will return a logical value of TRUE, FALSE or UNKNOWN. The values TRUE and FALSE follow the usual rules and UNKNOWN is always returned when one or both of the operands is a NULL.

SQL Programmers today do not remember the early days when NULLs were controversial. No procedural programming language had anything like this. The closest thing was in spreadsheets where various proprietary conventions existed for missing data.

The early Sybase SQL Server implementation allowed you to write “<expression> = NULL” and have it treated as “<expression> IS NULL”; this became a configuration option. But at the same time, “<expression> <non-equality operator> NULL” would work correctly and return UNKNOWN.

To make things even more confusing, SQL has two different equivalence relations. Let me give you a little math. An equivalence relation takes elements of a set and partitions them into “equivalence classes”. Each element belongs to one and only one class. Given any two elements from the set, you use the equivalence operator to determine if the elements are in the same class or not. The rules are:

Obviously, good old “equals” is such a relationship. But so does a Modulus function. Think about defining the old Pascal Boolean EVEN() function defined as MOD (x, n) where (n=2).

It partitions integers into odd or even numbers. You could do this for any value of (n).

In SQL, when you do a GROUP BY, you get a partitioning, and the NULLs are all put into one group. This was debated in the ANSI X3H2 Committee. If we had used strict equality, each NULL would be its own class and things would be a mess. So we invented grouping. Grouping is handy for many queries and not just for aggregate functions. It has the nice property of getting us back to two valued logic (2VL) and we like that.

This has lead programmers to write expressions to treat NULLs as members of the same equivalence class outside of aggregations. The most common idioms you will see are:

You have to be sure that <absurd value> is just that; something that cannot occur in either expression. Neither of these idioms is easy to read or to write. And until the optimizer gets smarter, they do not compile as well as you might like.

The SQL:2003 Standards added a verbose but useful theta operator.

is logically equivalent to

The following the usual pattern for adding NOT into SQL constructs,

is a shorthand for

This double negative was because the IS NOT DISTINCT FROM was defined first. I have no idea why.

The practical problems of missing or unknown data can be deemed to be solved by the use of NULLs as the convention in SQL. Hooray for us! But now the problem is data quality.

Data Quality as The Next Problem

Let me refer you to the work of Larry English, David Loshin, Jack Olson and Tom Redman. There is a good list of books on this topic here.

The basic message is that we have databases full of bad data. This is not a great surprise to anyone who still has a job in IT. I propose that we add a new theta operator to SQL in the next SQL Standard to help with this problem. Let me give the syntax and then explain it:

As usual, we will follow the ANSI SQL Standard convention that:

Implementation details are left to SQL optimizer writers; we Standards writers are only obligated to provide unambiguous BNF syntax and a narrative description of the effects that uses the “standard speak” requirements.

In the case of SQL, we decided we wanted an LALR(1) grammar. You are probably thinking that you should have been sober when Professor Celko got to that stuff in his compiler writing class. But since I was not sober either, I can forgive you.

The predicate describes itself. But let’s look at this as compared to an equivalence relation. It is idempotent:

This says that we trust the data; it looks good. The symmetric and transitivity properties do not apply. Constants can appear on either side, so this is asymmetric, like the LIKE predicate.

The first purpose of the predicate is to allow us to use bad data in queries, insert, update and delete statements. However it is useful in DDL CHECK() constraints.

The regular aggregate functions can now take a window clause.

They are easier to explain with the help of a diagram. 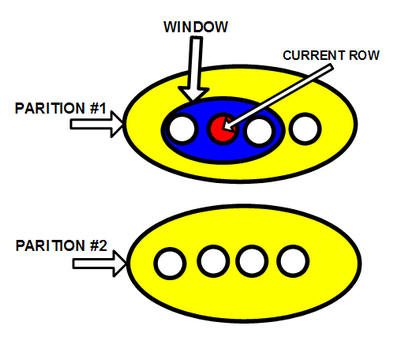 The window clause is also called the OVER() clause informally. It is an extension for aggregate functions. The idea is that the table is first broken into partitions with the PARTITION BY subclause. The partitions are then sorted by the ORDER BY clause. An imaginary cursor sits on the current row where the windowed function is invoked. A subset of the rows in the current partition is defined by the number of rows before and after the current row by the [ROW | RANGE] subclause. Finally, the subset is passed to an aggregate or ordinal function to return a scalar value.

A set of column names specifies the partitioning, which is applied to the rows that the preceding FROM, WHERE, GROUP BY, and HAVING clauses produced. If no partitioning is specified, the entire set of rows composes a single partition and the aggregate function applies to the whole set each time. Though the partitioning looks a bit like a GROUP BY, it is not the same thing. A GROUP BY collapses the rows in a partition into a single row. The partitioning within a window, though, simply organizes the rows into groups without collapsing them.

The ordering within the window clause is like the ORDER BY clause in a CURSOR. It includes a list of sort keys and indicates whether they should be sorted ascending (ASC) or descending (DESC). The important thing to understand is that ordering is applied within each partition.

The NULLS FIRST and NULLS LAST options are trickier than they first look, but T-SQL does not have them yet so do not panic yet.

The tricky one is the window frame. T-SQL does not have it yet and many MVPs want Microsoft to catch with DB2 and Oracle. Here is the BNF, but you really need to see code for it to make sense.

RANGE works with a single sort key. It is for data that is a little fuzzy on the edges, if you will. If ROWS is specified, then sort list is made of exact numeric with scale zero.

If the window starts at UNBOUNDED PRECEDING, then the lower bound is always the first row of the partition; likewise, CURRENT ROW explains itself. The <window frame preceding> is an actual count of preceding rows.

If the window starts at UNBOUNDED FOLLOWING, then the lower bound is always the last row of the partition; likewise, CURRENT ROW explains itself. The <window frame following> is an actual count of following rows.

The windowed functions need to be extended to handle bad data, just as we are doing with the SHOULD HAVE BEEN comparison operator. This is handled by the proposed FUDGE TO subclause.

Imagine that you want to do a sum and to keep it simple let’s ask “What is two plus two?”

The new FUDGE TO subclauses will look at the normal result value then will adjust it to whatever your boss wants it to be. This uses a fudge factor value arrive at the target values. This is an old informal concept used by accountants and bureaucrats. Formalizing it is an implementation detail.

We hope that the research that IBM put into their Watson project (www.ibm.com/watson) can be put into SQL. Watson is the super computer has defeated the two greatest human champs in the history of the television quiz show “Jeopardy” this year.

To celebrate April Fool’s day, Joe wrote this specially-commissioned article that mixes the profound with the silly.
We will be giving away two big prizes for the winners who correctly identify all  the April Fool jokes in this article. Please email your solutions to editor@simple-talk.com with the words ‘April Fool’ in the subject line. The two winners will be drawn out of the hat containing the names of the correct entries and will get either a SQL Developer Bundle license worth Â£895 or a SQL DBA Bundle license worth Â£825 (please state your preferences) . The next six correct entries will get a NET Reflector VS Pro license worth Â£60. Winners for the competition must be subscribers to either SQLServerCentral or Simple-Talk. Joe Celko and Phil Factor will, between them, decide on what constitutes a correct entry.  Entries by April 3rd 2011.

A Tale of Identifiers

Identifiers aren't locators, and they aren't pointers or links either. They are a logical concept in a relational database, and, unlike the more traditional methods of accessing data, don't derive from the way that data gets stored. Identifiers uniquely identify members of the set, and it should be possible to validate and verify them. Celko somehow involves watches and taxi cabs to illustrate the point. … Read more