T-SQL window functions, introduced in 2005 with enhancements in 2012, are great additions to the T-SQL language. In this article, Kathi Kellenberger explains what you need to know to get good performance when using these functions.

NOTE: See my new article to learn how improvements to the optimizer in 2019 affect performance!

The OVER Clause and Sorting

There are two options in the OVER clause that can cause sorting: PARTITION BY and ORDER BY. PARTITION BY is supported by all window functions, but it’s optional. The ORDER BY is required for most of the functions. Depending on what you are trying to accomplish, the data will be sorted based on the OVER clause, and that could be the performance bottleneck of your query. 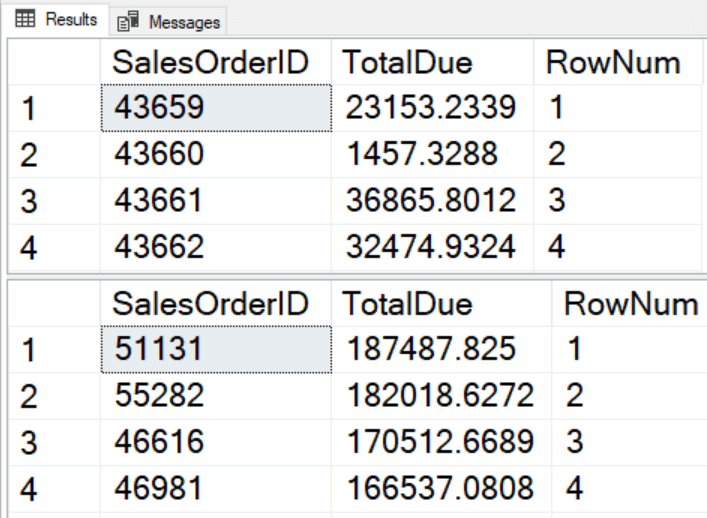 Since the first query is using the cluster key as the ORDER BY option, no sorting is necessary.

The second query has an expensive sort operation.

The ORDER BY in the OVER clause is not connected to the ORDER BY clause added to the overall query which could be quite different. Here is an example showing what happens if the two are different:

The clustered index key is SalesOrderID, but the rows must first be sorted by TotalDue in descending order and then back to SalesOrderID. Take a look at the execution plan:

The PARTITION BY clause, supported but optional, for all T-SQL window functions also causes sorting. It’s similar to, but not exactly like, the GROUP BY clause for aggregate queries. This example starts the row numbers over for each customer. 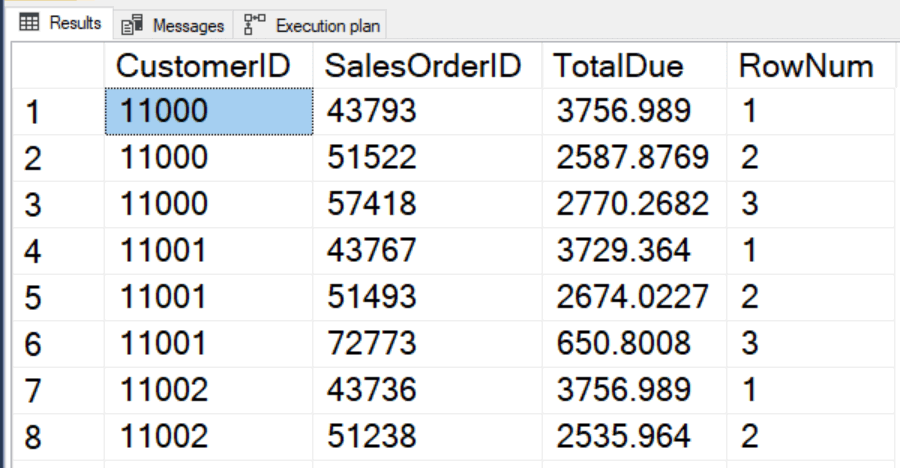 The execution plan shows just one sort operation, a combination of CustomerID and SalesOrderID.

The only way to overcome the performance impact of sorting is to create an index specifically for the OVER clause. In his book Microsoft SQL Server 2012 High-Performance T-SQL Using Window Functions, Itzik Ben-Gan recommends the POC index. POC stands for (P)ARTITION BY, (O)RDER BY, and (c)overing. He recommends adding any columns used for filtering before the PARTITION BY and ORDER BY columns in the key. Then add any additional columns needed to create a covering index as included columns. Just like anything else, you will need to test to see how such an index impacts your query and overall workload. Of course, you cannot add an index for every query that you write, but if the performance of a particular query that uses a window function is important, you can try out this advice.

Here is an index that will improve the previous query:

When you rerun the query, the sort operation is now gone from the execution plan:

Luckily, framing is not required most of the time, but unfortunately, it’s easy to skip the frame and use the default. The default frame is always RANGE BETWEEN UNBOUNDED PRECEDING AND CURRENT ROW. While you will get the correct results as long as the ORDER BY option consists of a unique column or set of columns, you will see a performance hit.

Here is an example comparing the default frame to the correct frame: 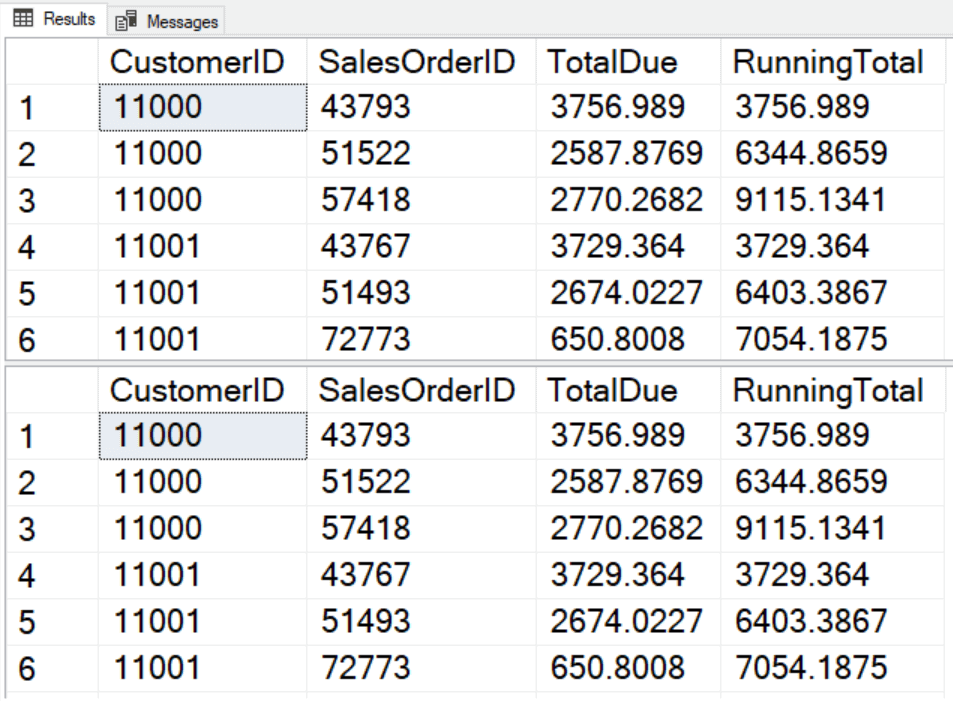 The results are the same, but the performance is very different. Unfortunately, the execution plan doesn’t tell you the truth in this case. It reports that each query took 50% of the resources:

If you review the statistics IO values, you will see the difference:

Using the correct frame is even more important if your ORDER BY option is not unique or if you are using LAST_VALUE. In this example, the ORDER BY column is OrderDate, but some customers have placed more than one order on a given date. When not specifying the frame, or using RANGE, the function treats matching dates as part of the same window.

The reason for the discrepancy is that RANGE sees the data logically while ROWS sees it positionally. There are two solutions for this problem. One is to make sure that the ORDER BY option is unique. The other and more important option is to always specify the frame where it’s supported.

One of the handiest feature of T-SQL window functions is the ability to add an aggregate expression to a non-aggregate query. Unfortunately, this can often perform poorly. To see the problem, you need to look at the statistics IO results where you will see a large number of logical reads. My advice when you need to return values at different granularities within the same query for a large number of rows is to use one of the older techniques, such as a common table expression (CTE), temp table, or even a variable. If it’s possible to pre-aggregate before using the window aggregate, that is another option. Here is an example that shows the difference between a window aggregate and another technique:

The next example uses a windows aggregate applied to an aggregate expression:

Since the data has been aggregated before the window function was applied, the performance is good:

There is one more interesting thing to know about using window aggregates. If you use multiple expressions that use matching OVER clause definitions, you will not see an additional degradation in performance.

My advice is to use this functionality with caution. It’s quite handy but doesn’t scale that well.

The examples presented so far have used the small Sales.SalesOrderHeader table from AdventureWorks and reviewed the execution plans and logical reads. In real life, your customers will not care about the execution plan or the logical reads; they will care about how fast the queries run. To better see the difference in run times, I used Adam Machanic’s Thinking Big (Adventure) script with a twist.

The script creates a table called bigTransactionHistory containing over 30 million rows. After running Adam’s script, I created two more copies of his table, with 15 and 7.5 million rows respectively. I also turned on the Discard results after execution property in the Query Editor so that populating the grid did not affect the run times. I ran each test three times and cleared the buffer cache before each run.

Here is the script to create the extra tables for the test:

I can’t say enough about how important it is to use the frame when it’s supported. To see the difference, I ran a test to calculate running totals using four methods:

I ran the test on the three new tables. Here are the results in a chart format:

Here is the query using the ROWS frame against the 30 million row table:

I also performed a test to see how window aggregates performed compared to traditional techniques. In this case, I used just the 30 million row table, but performed one, two, or three calculations using the same granularity and, therefore, same OVER clause. I compared the window aggregate performance to a CTE and to a correlated subquery.

Here is the winning query:

T-SQL window functions have been promoted as being great for performance. In my opinion, they make writing queries easier, but you need to understand them well to get good performance. Indexing can make a difference, but you can’t create an index for every query you write. Framing may not be easy to understand, but it is so important if you need to scale up to large tables.