Given the fundamental importance of indexes in databases, it always comes as a surprise how often the proper design of indexes is neglected. It often turns out that the programmer understands detail, but not the broad picture of what indexes do. Bob Sheldon comes to the rescue with a simple guide that serves either to remind or educate us all!

One of the most important routes to high performance in a SQL Server database is the index. Indexes speed up the querying process by providing swift access to rows in the data tables, similarly to the way a book’s index helps you find information quickly within that book. In this article, I provide an overview of SQL Server indexes and explain how they’re defined within a database and how they can make the querying process faster. Most of this information applies to indexes in both SQL Server 2005 and 2008; the basic structure has changed little from one version to the next. In fact, much of the information also applies to SQL Server 2000. This does not mean there haven’t been changes. New functionality has been added with each successive version; however, the underlying structures have remained relatively the same. So for the sake of brevity, I stick with 2005 and 2008 and point out where there are differences in those two versions.

Indexes are created on columns in tables or views. The index provides a fast way to look up data based on the values within those columns. For example, if you create an index on the primary key and then search for a row of data based on one of the primary key values, SQL Server first finds that value in the index, and then uses the index to quickly locate the entire row of data. Without the index, a table scan would have to be performed in order to locate the row, which can have a significant effect on performance.

You can create indexes on most columns in a table or a view. The exceptions are primarily those columns configured with large object (LOB) data types, such as image, text, and varchar(max). You can also create indexes on XML columns, but those indexes are slightly different from the basic index and are beyond the scope of this article. Instead, I’ll focus on those indexes that are implemented most commonly in a SQL Server database.

An index is made up of a set of pages (index nodes) that are organized in a B-tree structure. This structure is hierarchical in nature, with the root node at the top of the hierarchy and the leaf nodes at the bottom, as shown in Figure 1. 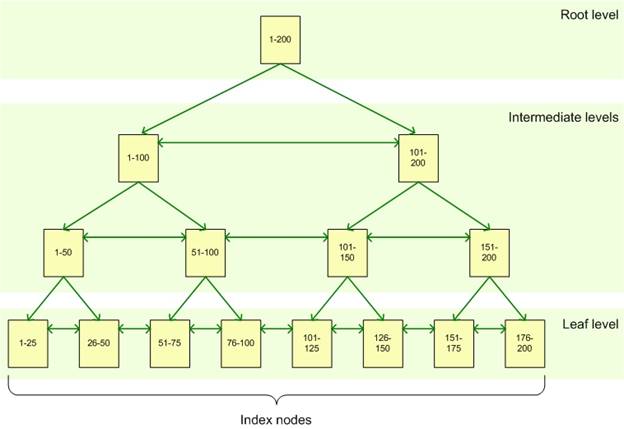 A clustered index stores the actual data rows at the leaf level of the index. Returning to the example above, that would mean that the entire row of data associated with the primary key value of 123 would be stored in that leaf node. An important characteristic of the clustered index is that the indexed values are sorted in either ascending or descending order. As a result, there can be only one clustered index on a table or view. In addition, data in a table is sorted only if a clustered index has been defined on a table.

Unlike a clustered indexed, the leaf nodes of a nonclustered index contain only the values from the indexed columns and row locators that point to the actual data rows, rather than contain the data rows themselves. This means that the query engine must take an additional step in order to locate the actual data.

In addition to an index being clustered or nonclustered, it can be configured in other ways:

A unique index is automatically created when you define a primary key or unique constraint:

As beneficial as indexes can be, they must be designed carefully. Because they can take up significant disk space, you don’t want to implement more indexes than necessary. In addition, indexes are automatically updated when the data rows themselves are updated, which can lead to additional overhead and can affect performance. As a result, index design should take into account a number of considerations.

As mentioned above, indexes can enhance performance because they can provide a quick way for the query engine to find data. However, you must also take into account whether and how much you’re going to be inserting, updating, and deleting data. When you modify data, the indexes must also be modified to reflect the changed data, which can significantly affect performance. You should consider the following guidelines when planning your indexing strategy:

Another consideration when setting up indexes is how the database will be queried. As mentioned above, you must take into account the frequency of data modifications. In addition, you should consider the following guidelines:

In this article, I’ve tried to give you a basic overview of indexing in SQL Server and provide some of the guidelines that should be considered when implementing indexes. This by no means is a complete picture of SQL Server indexing. The design and implementation of indexes are an important component of any SQL Server database design, not only in terms of what should be indexed, but where those indexes should be stored, how they should be partitioned, how data will be queried, and other important considerations. In addition, there are index types that I have not discussed, such as XML indexes as well as the filtered and spatial indexes supported in SQL Server 2008. This article, then, should be seen as a starting point, a way to familiarize yourself with the fundamental concepts of indexing. In the meantime, be sure to check out SQL Server Books Online for more information about the indexes described here as well as the other types of indexes.