To return detail data using DAX, use the table functions. Adam Aspin covers UNION, EXCEPT, INTERSECT, and CALCULATETABLE in this article.

As well as these core table functions, it also helps to understand the DEFINE, EVALUATE and MEASURE functions as well as the use of variables in DAX queries when returning data to paginated reports, so the article reviews these also.

Once again, it is worth remembering that many of the DAX table functions have quirks and limitations that can trip up the unwary user in certain circumstances. However, the aim in this article is not to provide an exhaustive discussion of every available function and the hidden depths and rarer aspects of each one. Rather, the intention is to provide paginated report developers with an initial overview of the core tools that you will inevitably need to extract data for paginated reports from a Power BI dataset. This article will use the same sample file (CarsDataWarehouse.Pbix) that you saw in the previous articles in this short collection.

Delivering more complex (or refined, if you prefer) output with DAX will inevitably involve the use of DAX variables. So now is a good time to introduce you to, or remind you about, DAX Variables. The first thing to remember is that DAX variables can contain:

What is more, any of these elements can be “hard-coded” values. This can be extremely useful for testing & debugging when your DAX starts getting more complex.

Variables can be introduced at any point in the course of a DAX EVALUATE statement. However, for clarity, reusability and sheer elegance I often find it easier to specify variables at the top of the script using the DEFINE keyword, then use them as required inside the DAX query.

To get a better idea of how scalar DAX variables can be used, take a look at the following code snippet (where the parameter @Make is input as Ferrari):

The complete output from this query is as shown in the following image when typing in Ferrari at the prompt: 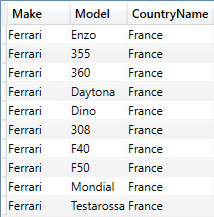 All that this piece of DAX does is to define two variables. The first one is given a value directly, the second is passed a value from the SSRS parameter @Make. So, overall, it is worth noting that:

You can, of course, add the column(s) that you are filtering on to the output if you want to verify that the filter is working as you expect.

A DAX variable can also be a measure (a calculation if you prefer) – as you can see in the following short piece of DAX: 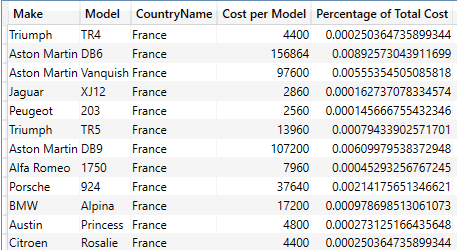 If you are verifying the output, remember that the DAX variable TotalCost is returning the cost for all makes for all countries – and the output table is showing only cars sold in France – and so the total of the Percentage of Total Cost is not 100%. 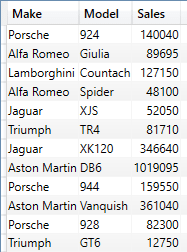 Variable measures – as distinct from merely attributing a measure to a variable can be useful in a couple of ways:

As a simple example, the DAX shown below uses the MEASURE keyword to introduce a variable measure: 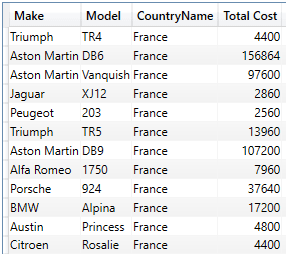 Be aware, however, that a variable measure:

EXCEPT, UNION and INTERSECT

I assume that the concepts behind these functions are self-evident, so prefer to show one way that a couple of them can be useful to resolve certain common reporting challenges. For instance, you can apply EXCEPT() and UNION() to isolate certain records (which you analyse in detail) from all the remaining records (which you aggregate into a single row in the output table).

The principle behind the query that you are about to see is:

Here, then, is the actual code:

Of course, the set of records that is categorised (ie., not “other”) can be calculated using a more complex DAX query rather than simply being hard-coded as is the case here.

There is one main point to note here: SUMMARIZE() can be used not only to aggregate – but also to rename the element that is output. This is a useful trick when aggregating a table into a single record.

A variation on the theme above is to isolate all records that match a simple filter category, and then aggregate the others into a single record. This time, however, GROUPBY() and SUMMARIZE() are used in slightly different ways to achieve the same result. This is an example of how DAX table functions can be combined to solve certain paginated report challenges: 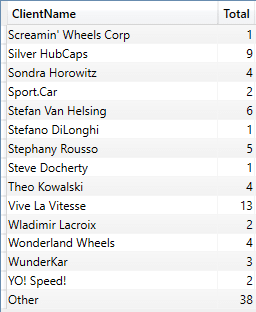 The points of note here are:

As mentioned in the previous article, nesting filter criteria rapidly becomes wearing once you start nesting multiple criteria applied using multiple FILTER() functions. A more practical approach can be to wrap a function that returns a data table inside the CALCULATETABLE() function – and apply all the required filters as filter expressions. So, in essence you are applying CALCULATE() filters – to a table.

The output is as shown in the following image:

You need to note a few key complexities if you ever adopt this approach:

CALCULATETABLE() can also be used with filter tables as well as (or instead of) simple filter elements of the kind that you just saw.

The following DAX extract creates a table variable of a list of country names and then uses the table variable as a filter element that is applied by CALCULATETABLE():

The output (shortened once again) is as shown in the following image: 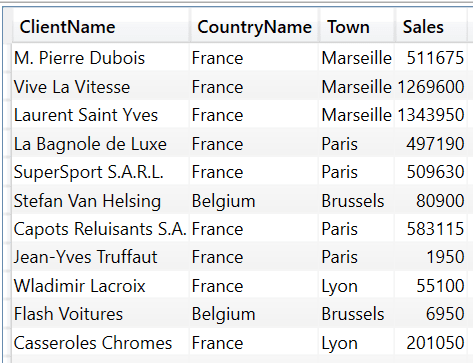 In practice, this kind of approach can be more useful if the filter table is based on, say, a calculation. As an example, the following DAX sample creates a filter table that dynamically calculates the top two selling makes of car (by sales) and filters on the result:

Part of the output from this code snippet is as shown in the following image: 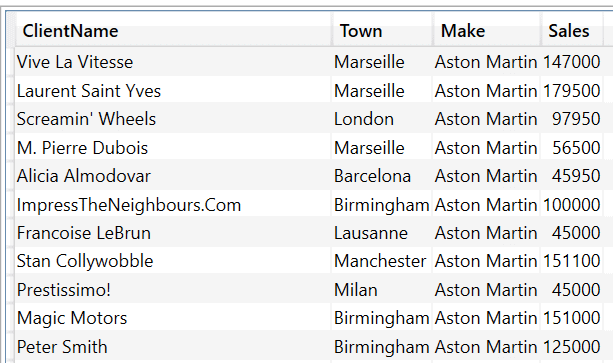 Here too, you do not have to display the make in the output, but I have chosen to do so to prove that the filter table actually works.

While we may have looked at the core, everyday use of SUMMARIZECOLUMNS() in the previous article, there are a couple of ways that this function can be extended that are worth knowing about. You may, one day need to use the ADDMISSINGITEMS() function to force rows to be returned that SUMMARIZECOLUMNS() would otherwise exclude.

To make the comparison clearer, running the DAX without ADDMISSINGITEMS gives the following output:

As you have learned, there is a small suite of DAX table functions that you can use to return data to paginated reports from a Power BI dataset. A good understanding of the available functions – and how they can be used, individually or together – will help you to deliver the output that you wish to display in your paginated reports.

Remember that the aim of these two articles is not to provide an exhaustive and detailed overview of all the DAX table functions. The subject is simply too large for that. However, there are many excellent resources available if you wish to delve deeper into the myriad possibilities (and arcana) of table functions. What you have seen here is that you are not limited to SUMMARIZECOLUMNS() when returning tabular output from a Power BI dataset to a paginated report, and that there are several other functions that you may find useful – or even necessary – in certain circumstances.

Adam Aspin is an independent Business Intelligence consultant based in the United Kingdom. He has worked with SQL Server for seventeen years. During this time, he has developed several dozen reporting and analytical systems based on the Microsoft BI product suite.

A graduate of Oxford University, Adam began his career in publishing before moving into IT. Databases soon became a passion, and his experience in this arena ranges from dBase to Oracle, and Access to MySQL, with occasional sorties into the world of DB2. He is, however, most at home in the Microsoft Business Intelligence universe when using SQL Server Analysis Services, SQL Server Reporting Services, SQL Server Integration Services and SharePoint.

View all articles by Adam Aspin