In this article, Kathi Kellenberger takes on a logic puzzle in trying to understand how the windowing function, PERCENTILE_CONT, works.

I have been living and breathing T-SQL windowing functions for years. I couldn’t tell you how many times I have presented on the topic, but I expect it is well over 50. I had also used these functions quite often when I worked in consulting, but now I spend more time teaching others instead of solving real queries with the functions. I love my job as editor of Simple-Talk, but I do sometimes miss those days of writing and tuning queries for customers.

I was recently playing with the analytical group of windowing functions, and I wanted to understand how they worked “under the covers.” I ran into a little logic puzzle with PERCENTILE_CONT by trying to write a query that returned the same results using pre-2012 functionality.

The definition from Microsoft for PERCENTILE_CONT is:

“Calculates a percentile based on a continuous distribution of the column value in SQL Server. The result is interpolated and might not be equal to any of the specific values in the column.”

There is also a function called PERCENTILE_DISC that is similar. Instead of interpolating to find the exact value, it returns one of the actual values in the set.

At first glance, the PERCENTILE_CONT function doesn’t seem so difficult to understand, but I had a hard time writing a query that produced the same results using older functionality. Before I show you the path I travelled to come up with the pre-2012 solution, take a look at how to use PERCENTILE_CONT with an example from AdventureWorks that ranks the count of sales for each month in a given year. I also include PERCENTILE_DISC in this query so that you can see the difference between the two functions. 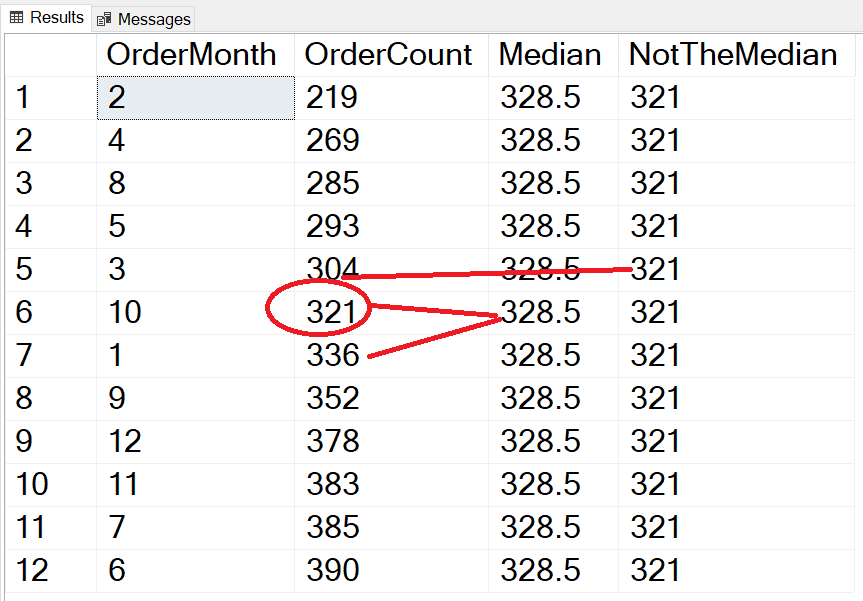 The PERCENTILE_DISC function returns the value 321, which is close to but not the median. The PERCENTILE_CONT function returns the average of the two values around the median, 321 and 336, for an answer of 328.5. If there were an odd number of items in the list, then the two answers would be the same. The results of PERCENTILE_CONT and PERCENTILE_DISC do not depend on the values in the set, just the position. For example, if you tried to find the median of this list (1,2,3,4,1000) the answer is 3. It doesn’t matter that 1000 would skew the results of the mean.

The syntax of PERCENTILE_CONT and PERCENTILE_DISC is different than the other windowing functions because these require the WITHIN GROUP clause. Inside that, you must provide an ORDER BY expression that returns a list of numbers such as scores, heights, sales, etc. You still need an OVER clause, but it supports only the PARTITION BY. 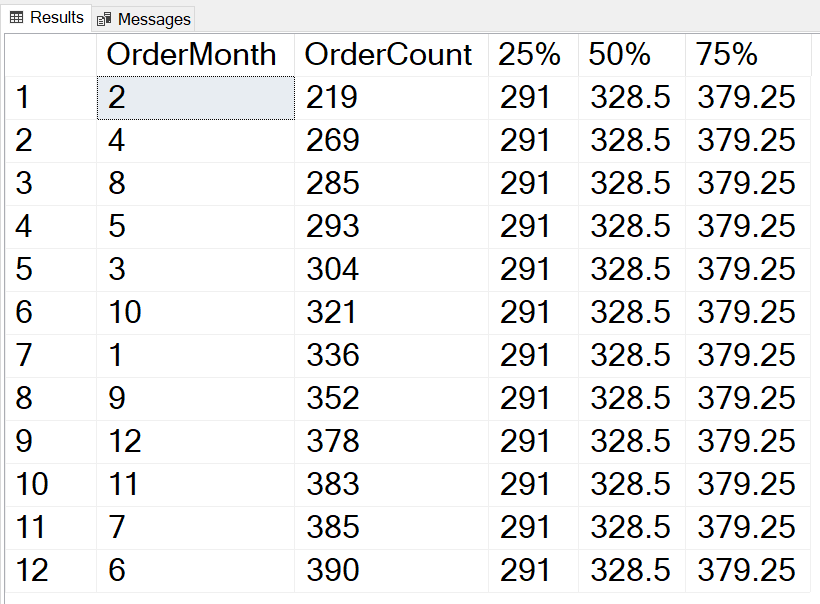 This example returns the PERCENTILE_CONT values at 25%, 50%, and 75% respectively. These will be used as examples for testing the code for the pre-2012 solution.

Of course, I started by searching for an explanation of the function, but I ran into a formula that worked for 50% but fell apart when checking any other percentile. Here’s the description from the article:

Here are the calculations for each of the percentiles in this example:

The formula works only with the 50th percentile and not for the others. The calculated values were not even close for 25% and 75%.

Here’s a batch that you can use to verify the results. Change the value of @P to try different percentiles:

Since the formula was not correct, I had to come up with something else.

A Logical Next Step

My first thought was that the difference between the two rows should be multiplied by P and added to the bottom value. This didn’t work either, even though it seemed to make sense. Again, this works for the 50th percentile but falls apart for the others. One good thing about this revised formula is that the answers were always between the floor and ceiling values, but in one case my answer was too low and in the other too high.

At this point, I was beginning to question the function itself since my idea made sense, well, to me at least.

Here’s a batch to test my hypothesis:

The CTEs are the same as the previous example since steps 1 – 3 work. The difference is in the outer query where the new formula is used.

As I do with many problems, I started with a new query window and took it one step at a time. I knew that I was finding the correct rows for the floor and ceiling values at least. My next step was to look at the percentage of the difference between the two values. Was there a pattern?

I used this calculation:

Here’s a table that shows the results:

Bazinga! Notice that the Percent of difference in each case is equal to the fractional part of RN. This makes sense! If you view the numbers as being on a line, the value found at precisely the RN point is the answer!

By using modulo, the fractional part of RN can be found. Finally, here is the query:

Once again, the only difference is the formula in the outer query. The CTEs are the same.

Figuring out how PERCENTILE_CONT is calculated is not something that I needed to do, but I do enjoy solving the occasional T-SQL puzzle. The other windowing functions are not difficult to understand, but this one had me scratching my head for a bit. I thought that sharing my thought process might be interesting to others who are getting started with these functions.

The main benefit of using windowing functions is that they make writing queries to solve tricky problems easier, often eliminating anti-patterns such as cursors or triangular joins. The solution does take advantage of the windowing functions introduced with 2005. Trying to accomplish the same thing with SQL Server 2000 or earlier would be even more difficult.

Formatting Power BI visuals can be tedious. In this article, Adam Aspin explains custom Power BI themes that will save you time when creating reports.… Read more