Dependencies and References in SQL Server

It is important for developers and DBAs to be able to determine the interdependencies of any database object. Perhaps you need to work out what process is accessing that view you want to alter, or maybe find out whether that table-type you wish to change is being used. What are all these dependencies? How do you work out which are relevant? Phil Factor explains.

Dependencies and References in SQL Server.

In a relational database, it isn’t just the data that is related, but the database objects themselves. A view, for example, that references tables is dependent upon them, and wherever that view is used the function, procedure or view that uses it depends on it. Those tables referred to by the view may in turn contain user-defined types, or could be referenced to other tables via constraints. By its very nature, any SQL Server database will contain a network of inter-dependencies.

Most of us need to think very little about finding out about dependencies, since SMO allows SSMS to get dependency information for us for any list of database objects, and display it in a tree structure. If you wish to know what dependencies an object has, or what it in turn depends on, You just right-click the object in the object explorer pane and click on ‘view dependencies’ in the context menu that then appears. 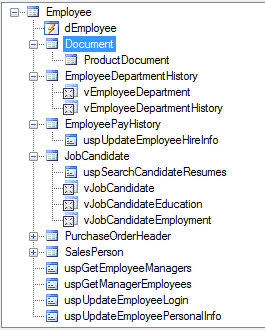 Your re-engineering work must take these dependencies into account. If you need to, for example, delete a column, your work must start at the ‘leaves’ to make sure that nothing untoward references that column. If you change a user-defined table type, then you need to check wherever it has been used in the database. SSMS uses SMO to get this information. You can get the same information yourself, if you need to, by using a PowerShell script to get the same information from SMO. Accessing, in this example, the same table from the same database …

Is there another way of doing this, hopefully in SQL? Well, yes there is, but I’ll be showing how to do that at the end of the article, and providing the code. But firstly, I’ll need to explain where some of the complications are.

These soft dependencies are all recorded and are available from the sys.sql_expression_dependencies. If someone has allowed ad-hoc SQL to be generated by applications rather than use stored procedures or functions, you are free to weep at this point, because you have missed out on getting all this essential information and will find it very hard to refactor your database.

‘Soft’ Dependencies happen when you have a routine (that is a procedure, function rule, constraint or anything else with code in it) that refers to another entity, possibly in another database. By dint of a SQL Expression in, say, a View, you can make that view dependent on one or more other objects. This dependency information is maintained by the database, but not for rules, defaults, temporary tables, temporary stored procedures, or system objects, and only when the referenced entity appears by name in a persisted SQL expression of the referencing entity.

There are two types of soft dependency

Here is a simple query to find out in AdventureWorks, all the references that Sales.vIndividualCustomer makes

And here is a query that finds out all the objects that reference ‘Sales.SalesOrderHeader’

Sys.sql_expression_dependencies also has the information as to whether the dependency is schema-bound or not.

Here is a routine that shows you the soft dependency order of the objects in your database, and lists the external dependencies of any objects. (note that a lot of entities in a database aren’t classed as objects. )

there are also two functions that provide information on soft dependencies

‘Hard’ dependencies can happen whenever an object can reference another one. The rules are complicated.

SQL Server  has a number of types of objects and a whole lot of other entities that aren’t classed as database objects. The rules of what can reference what is best expressed as a table 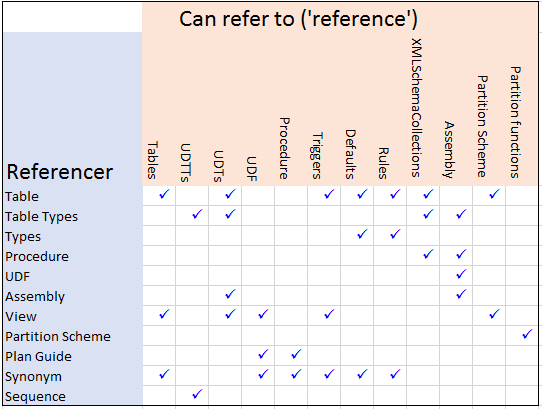 Databases, in general, have to be built in the right order.  This order avoids building anything that relies on an object that hasn’t been built yet. An easy way of doing this is to create objects in a particular order of object types.  The downside of doing this is that objects that should really go together for clarity when inspecting scripts, such as tables, constraints, extended properties and indexes, get scattered in to different places for the convenience of an easy compilation. Clarity is sacrificed for convenience: also you will still need to do certain routines in soft dependency order.

SMO likes to do build scripts in ObjectType order in a build script. The script starts with Database properties, followed by Schemas, XML Schema Collections and Types: none of which can have dependent objects. Table Types and Procedures come next. Then, in dependency order, Functions, Tables and Views. Then come Clustered indexes, non-clustered indexes, Primary XML Indexes, XML indexes, Default Constraints, Foreign keys Check constraints, triggers and lastly, extended properties. This order minimises the shuffling that needs to be done.  Stored procedures are unique amongst modules or routines in that they have deferred compilation, which neatly kicks soft dependencies into touch for builds.

‘Soft’ dependencies are likely to refer to objects in other databases. These can be on the same server or on a different server. These can both be obtained from sys.sql_expression_dependencies.  Sometimes, these can cause difficulties in the delivery process because they aren’t properly encapsulated in an interface of some sort, and aren’t wired into the build process. Often, these external references need to be ‘mocked’ in development and only assigned to their destination during test or staging.  This means that the actual routine that makes the external reference must  be related to the particular delivery environment (e.g. Integration Test, UAT, Performance Testing, staging and production), and the development build will have the source of the ‘mock’ only. Each delivery environment is assigned the correct version of the code.  The sys.sql_expression_dependencies is your friend in ensuring that all these external dependencies are tracked, and that none slip through the net to cause build problems. A warning though: XML documents are considered by SQL Server to be external databases and produce false positives when attempting to identify cross-database dependencies.

I have worked with database developers who maintain hand-cut database build scripts that are done in a way that preserve dependency order whilst aiming at clarity. It is a pleasure to inspect, when done by one of the more professional developers, since it is generally well-documented. These are generally done, and saved in source-control, at schema level to allow more than one developer to work on the database concurrently. Cross-schema references are relevant here because the best practice is to reduce these to a minimum to allow as much autonomy as possible to the individual developer, avoid merges, and have as few build-breakages as possible. Here, with cross-schema references, both soft and hard dependencies are possible. Schema builds, unlike database builds, can list their object creation scripts in almost any order after the CREATE SCHEMA without errors.

The reality of many dependency-based operations is that only one type of dependency is relevant, and not even the individual dependency chains. It just depends on ‘layers’. Take tables, for example. If you had a list in which the tables of a database were layered according to the fact that all their dependencies were satisfied by the preceding layer or below, then, as long as you do the operation to all of the layer below before the current one, then you aren’t going to break a dependency. I use this type of routine to to do fast-BCP loads into tables as part of a build, but it is also useful to establish an order of  build if your individual table scripts contain embedded foreign key definitions as either column or table constraint definitions.

This sort of technique only works with some operations. With others, you need to follow a dependency branch from a particular object to track all the objects that a particular object depends on, and what depends on the object. This requires a more surgical approach based on the dependency tracker in SSMS. For a broader perspective that allows you to inspect an entire database, as well as to zoom in on detail, then SQL Dependency Tracker is ideal.

So is there another way to just simply list the dependencies, in other words the entities that depend on an object, and the ones that the object depends on, other than using PowerShell or the dependency displayer within SSMS? I use my own SQL-Based  home-brewed dependency tracker for the work I need it for. It is in SQL but its code is a bit long to list here in the article. It can be viewed here. It shows a lot of what I’ve described in this article and in more detail. It gives you a similar display to the one in SSMS, but you can use it for other purposes as well, and it is rather faster! You can download it from the head of the article.

It is a bit rugged when compared with what you can achieve via SSMS, but it is quicker, and great for SQL development work when you are having to check out a rats-nest of dependencies. (To use it with SQL Server 2008, you’ll need to nick out the statement that accesses sys.sequences, together with it’s accompanying UNION ALL)

If you can be sure about the way that the database objects you’re working on depend on each other and upon other database objects, both in the database and outside it, then it becomes a lot easier and more restful to re-engineer a database. Refactoring becomes less like an extreme sport, and more like knitting. If your database sticks to the convention of using only compiled routines such as stored procedures and functions, then you will know what references that table you want to get rid of, or what needs to be reworked when you alter that user-defined table type.  Any tool, or combination of tools, that track dependencies are going to be very useful to you.

The only way to derive meaning from the massive amounts of data collected today is to develop innovative high-performing, high-capacity storage solutions. In this book, Robert Sheldon explains the many types of storage currently available and what's on the way.… Read more