The Performance of Window Aggregates Revisited with SQL Server 2019

T-SQL window functions have been a fantastic addition to the T-SQL language. In this article, Kathi Kellenberger reviews how optimizations available in SQL Server 2019 can improve the performance of these functions.

In 2005 and 2012, Microsoft introduced a number of windowing functions in SQL Server, like my favourite function LAG. These functions perform well, but, in my opinion, the main benefit is making complicated queries easier to write. I’ve been fascinated by these functions for years, but there is one thing about them that has bothered me, and that is the performance of window aggregate functions. Luckily, that is changing with SQL Server 2019.

What are Window Aggregate Functions?

I’m running SQL Server 2019 CTP 2.2, and the database is in 2016 compatibility mode. The first query lists the sales orders, and the second query also has a sub total for each customer. The results should look like Figure 1. 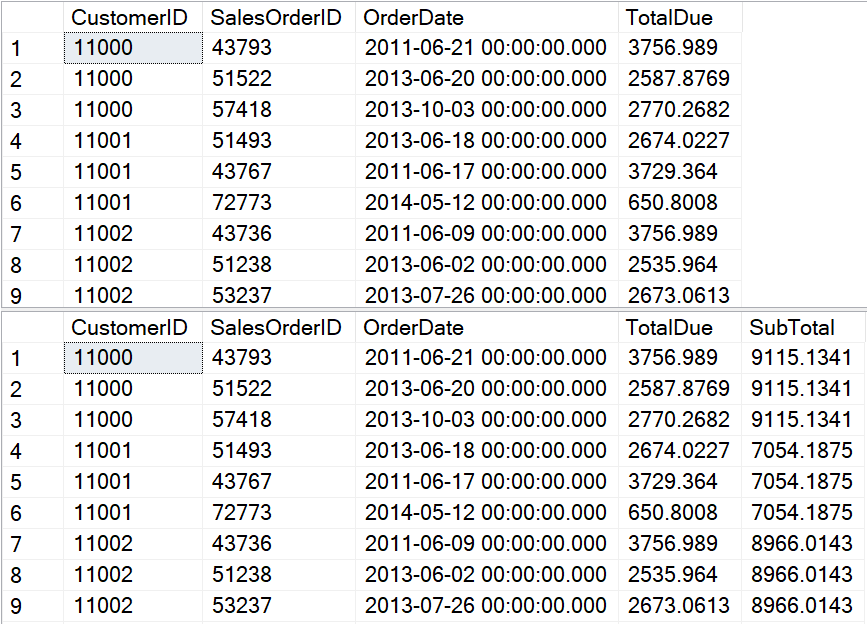 Figure 1: The partial results of the sales orders queries

I think you would have to agree that calculating the subtotal was easy to do. You just have to add the OVER clause. In this case, I wanted the subtotals for each customer, so I included PARTITION BY CustomerID. The problem with this technique is that the performance has been disappointing. In fact, I’ve been recommending that window aggregates be avoided when they must operate on a large number of rows. To show what I mean, take a look at the STATISTICS IO results in Figure 2.

Figure 2: The logical reads for the sales orders queries

Is the Performance Really That Bad?

To show how much the window aggregate impacts performance, the following queries use bigger tables created from Adam Mechanic’s script Thinking Big Adventure. To make sure that populating SSMS (SQL Server Management Studio) does not affect the run times, the results are saved in temp tables. Here are two queries calculating the subtotal for each product in this table of 31 million rows.

Since the results are stored in temp tables, the only output is the STATISTICS IO and STATISTICS TIME. The first query in this example demonstrates one of the traditional methods to get subtotals, using a CTE (common table expression) that joins to the original table. The second query creates the same results, but with a window aggregate function.

To make sure that caching didn’t affect the run time, I ran the queries twice. The statistics results of the second run can be seen in Figure 3. 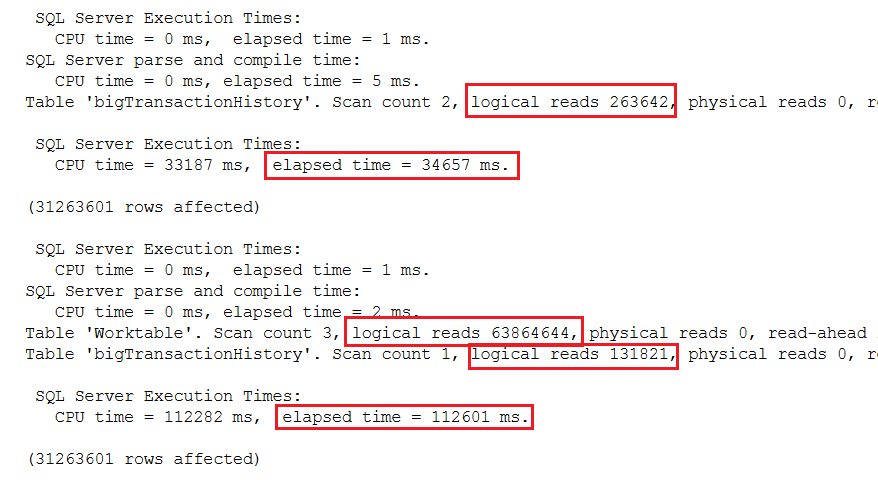 Figure 3: The results of running the test on bigTransactionHistory

In 2016, Microsoft announced an advancement in the columnstore index feature called batch mode processing. This feature also improves the performance of window aggregate queries as long as a table with a columnstore index is part of the query. If that happens naturally, wonderful! Otherwise, artificially adding a columnstore index seems like more trouble than just using the traditional query method.

To show the difference in performance, this example creates an empty temp table with a columnstore index and adds it to the query.

To see the benefits of the 2016 change, the database compatibility level was changed to 2016. The empty table #CS was created along with a columnstore index. It’s added to the query with an OUTER APPLY and doesn’t affect the results.

The performance results can be found in Figure 4:

Figure 4: Including a columnstore index to improve performance

In this test, the performance was similar to the traditional CTE query. That’s great, but in my opinion the main reason to use the window aggregate is to make the query simple to write. I don’t want to add the complexity of adding an artificial columnstore index. Luckily, in 2019, batch row processing applies to some queries that could benefit from it without a columnstore index, including window aggregates! This feature is called Batch Mode on Rowstore. Here is another test, this time with 2019 compatibility level.

This time, the query took just 15 seconds to run! The performance results are shown in Figure 5.

To get running totals, all you have to do is add ORDER BY to the OVER clause to the window aggregate. This is easy to do and will give you the results you expect as long as the columns in the ORDER BY option of the OVER clause are unique. To drastically improve performance, you need to add the frame (ROWS BETWEEN UNBOUND PROCEEDING AND CURRENT ROW) to the OVER clause. This is intuitive and is probably left out more often than it’s included. To see the difference, this test compares using the frame to not using the frame in 2016 compatibility mode.

The results when using 2016 compatibility mode can be seen in Figure 6. 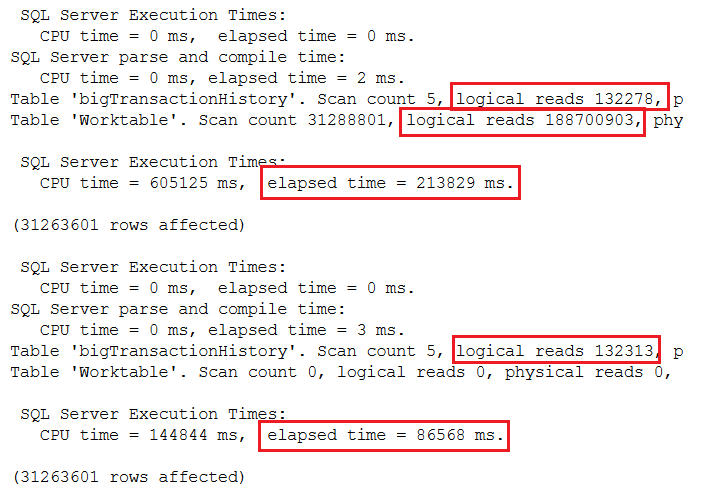 Figure 6: The results comparing using a frame with 2016 compatibility

By using the frame, the query went from almost 4 minutes to 1.4 minutes. Here’s the same test except for 2019 compatibility to take advantage of batch mode processing.

With batch mode, there is no performance penalty due to leaving out the frame. In each case, it took less than 30 seconds to run, even faster than using the frame in 2016. Of course, you will need to include the frame if you need one that is different than the default. (See my article Introduction to T-SQL Window Functions to learn more.) Figure 7 has the performance results. 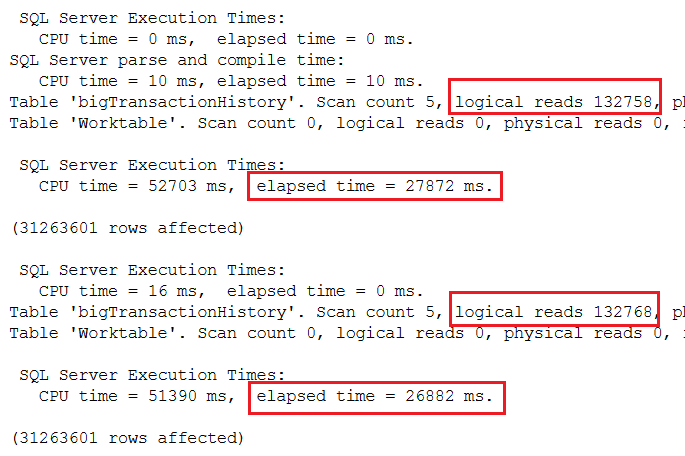 Figure 7: The results of using 2019 compatibility mode with running totals

As you can see, this new batch mode on rowstore feature dramatically improved the performance of these two window function queries. My queries ran about 7 times faster, but your results will vary. How does batch mode work? It breaks the processing down into chunks of 900 values. SQL Server reserves this for queries with aggregation and sorts when scanning a large number of rows. It’s one of several query processing improvements available with 2019 which together are called Intelligent Query Processing.

You may be wondering how to know if batch processing is used for a query. If you take a look at the execution plan, you can see the difference. Figure 8 is the execution plan for the subtotal query while in 2016 compatibility mode. To make this easier to see, I’ve split the image into two. The top shows the left side of the plan, and the bottom is the right side of the plan. 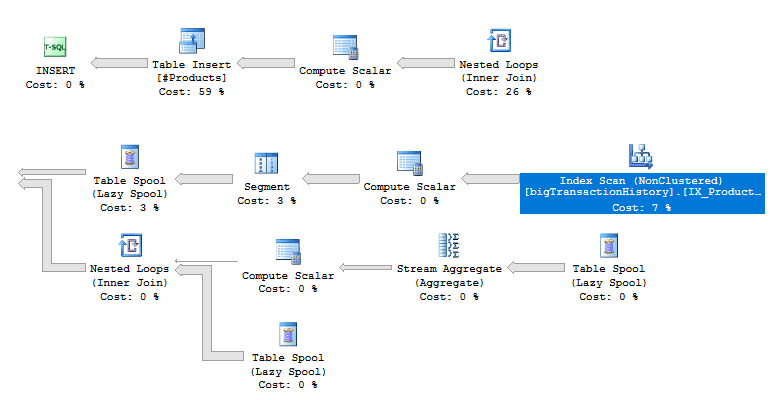 Figure 8: The execution plan for the subtotals with 2016 compatibility mode

The first interesting thing to note is that parallelism is not used even though it seems like it would be useful in a query of 31 million rows. It might be possible to rewrite the query to persuade the optimizer to parallelize the query, but that’s an article for another day.

Also notice the Table Spool operators. These are the worktables that you saw in the STATISTICS IO output. These are joined to the results using Nested Loops.

If you open the properties of the Index Scan operator (Figure 9), you’ll see that the storage is Rowstore, and the Actual Execution Mode is Row. 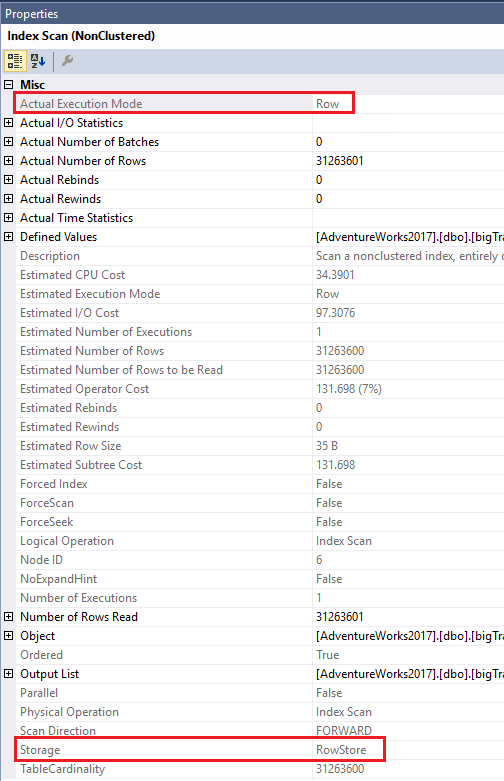 Now take a look at the execution plan in Figure 10 for the same query when in 2019 compatibility mode. Again, I have split it up to make it easier to read.

First, you will probably notice that this plan looks much simpler. There are no more worktables (Table Spools) and no need for the Nested Loops. There is also the new Window Aggregate operator. Hovering over the operator brings up the information shown in Figure 11. 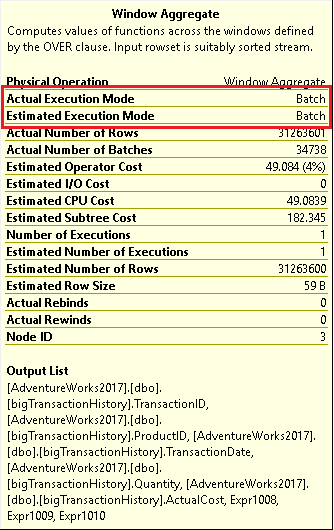 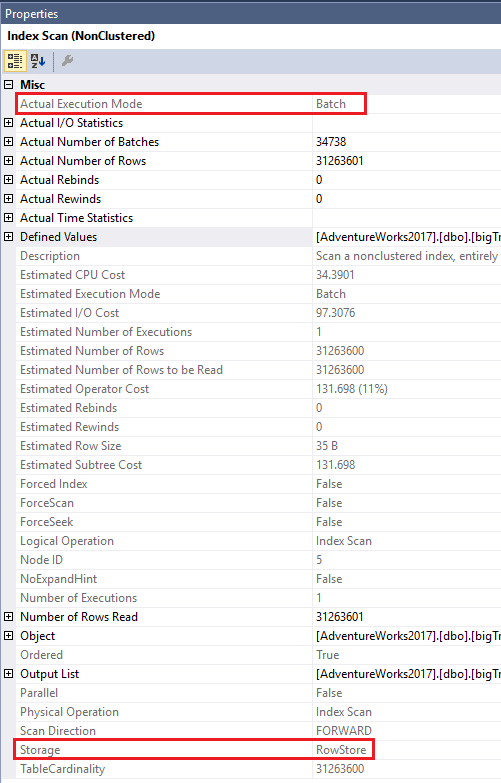 As mentioned earlier, batch mode on rowstore is reserved for queries of a large size that include certain aspects such as sorting or aggregates. I wondered where the tipping point was for this query, so I decide to create a copy of the bigTransactionHistory with the same indexes, just a smaller number of random rows. I found that the tipping point was 131,072 rows for this query on this instance running in an Azure VM. It could be something entirely different for another situation.

If you are using a monitoring tool, such as Redgate’s SQL Monitor, you can see the performance history of your queries and whenever the execution plans change. Wouldn’t it be a nice surprise if a query suddenly started running 5 or 10 times more quickly as the data grew?

Many organizations are not going to upgrade every time there is a new version of SQL Server available. When they do upgrade, they often skip versions. The Big Data Clusters feature is getting a lot of publicity, but not every shop will need it. I think everyone is going to appreciate the new query optimizations. Batch mode on rowstore is just one of many great features that will improve performance by just upgrading to 2019 when it’s generally available.

Kathi Kellenberger is the Editor of Simple Talk and a Microsoft Data Platform MVP. She has worked with SQL Server for over 20 years and has authored, co-authored, or tech edited more than 20 technical books. Kathi is a volunteer at LaunchCode, the St. Louis based organization providing free training and paid apprenticeships in technology. When Kathi isn’t working she enjoys spending time with family and friends, cycling, singing, and climbing the stairs of tall buildings. Be sure to check out her courses on Pluralsight.

0 2
Vertipaq optimization is a critical component of the columnstore compression process. Edward Pollack explains how it works and what you need to know to manage it.… Read more
0 2

0 1
It’s not difficult to set up an extended event session, but reviewing and saving the data can be complex. In this article, Edward Pollack demonstrates how to collect extended event data.… Read more
0 1

0 0
You can summarize data to get counts, averages, sums, and more using GROUP BY in T-SQL queries. Greg Larsen shows you how.… Read more
0 0