BETWEEN the two of us

BETWEEN can be used in a SQL WHERE clause to filter on a range. Joe Celko explains the history of BETWEEN and also could be implemented.

This past August, I was looking at an online SQL tutorial. One of the sessions in it featured the

BETWEEN predicate, which brought back some memories. In the early days of SQL on the ANSI X3H2 Database Standards Committee, we created the BETWEEN predicate. We wanted the SQL language to sound a bit like English and have shorthand terms for common coding situations. Many of our keywords were stolen from other programming languages or deliberately chosen so that they were not likely to be confused with data elements. The original syntax for the between predicate looks like this:

And the negated version of the predicate

The grammar for SQL is deliberately picked to be LALR(1). If you don’t remember that from your compiler writing classes, don’t feel bad. It means that SQL can have a little more complicated grammar than many programming languages to sprinkle keywords In places a little more like natural English. It’s important to notice that the BETWEEN predicate uses a closed interval, which includes the endpoints of the range. However, the NOT BETWEEN excludes them.

At some point in these early days, one of the committee members proposed changing the syntax and creating what would now be called a “symmetric BETWEEN” as the default definition. This proposal passed because committees love proposals. Only Microsoft implemented this feature in their Access tabletop database. All the other vendors ignored it, and the proposal was rescinded at the next committee meeting.

But proposals with extended features seem to keep coming back to life. The current ANSI/ISO standard syntax is:

The keyword ASYMMETRIC has the original functionality, and it is optional. The BETWEEN SYMMETRIC syntax is like BETWEEN except that there is no requirement that the argument to the left of the AND be less than or equal to the argument on the right. Well, not entirely: officially, the <begin_expression> is the minimum, and the <end_expression> is the maximum. This transformation converts a SYMMETRIC BETWEEN into a regular old vanilla BETWEEN.

Intervals in the ISO data model

Several ISO standards deal with the concepts of intervals. From a mathematical viewpoint, the kinds of intervals you can have are (1) Closed, (2) Opened, (3) Half open high, and (4) Half open low. A closed interval includes both the endpoints, like the range in the BETWEEN predicate. An open interval excludes both the endpoints of the range, like the NOT BETWEEN predicate. The half open intervals are open on either the high-end or the low end of the interval range.

A half open interval on the high-end is how ISO models time. We talk about “24-hour time” Or “military time,” but the truth is a day is defined as an interval from 00:00:00 up to 23:59:59.999.. at whatever precision can be measured. If you try and put in “24:00:00 Hrs”, DB2 and other databases will automatically convert it to 00:00:00 Hrs of the next day. Think of it as being like converting a person’s height from 5’18” to 6’6” instead. These conventions get even stranger when you look at how different countries and cultures handle times greater than one day. If an event in Japan runs past midnight, they simply add more hours to the event. For example, an event that ran past midnight might be shown as “25:15:00 Hrs.”

The advantage of the half open interval is easy to see in the ISO 8601 standards, which define how temporal data is represented. You are always sure when an event starts, even if you’re not sure when it will end, so you can use a NULL to mark the end of an event that is in process. This NULL can be coalesced to a meaningful value. For example, sometimes it might make sense to use COALESCE(interval_final_timestamp, CURRENT_TIMESTAMP) To figure out the duration of the interval at exactly the moment the query is invoked. Other times, you might want to use COALESCE(interval_final_timestamp, legally_defined_stop_timestamp).

The BETWEEN predicate is not just used for timestamps. It works perfectly well for numeric ranges and text, too. Numeric ranges can be used to throw things into buckets, which looks reasonably obvious until the three parameter values are of different numeric types. Now you have to consider rounding and casting errors. Even worse, if the parameters are character data with different correlations. As a generalization, you really need to make sure that all three parameters are of the same type. In fact, ranges and text data can get so complicated, I’m just going to ignore them. Let’s just look at numeric ranges.

The CASE expression in SQL is executed from left to right, and the first WHEN clause that tests TRUE returns the value in its THEN clause. This means that the order in which you write your tests will control how it executes; not all programming languages work this way. In effect, we have hard-coded half open intervals.

It is important to notice that this expression will handle somebody who has more than 100 points to qualify as an “A” student. In this example, that’s probably what was intended for extra credit, but this might indicate an error in the data in other schemes. Likewise, a score of zero might be a data error. Then, of course, because this is SQL, what would a NULL mean? Perhaps it indicates an incomplete? A general rule of thumb is to design for the extreme cases but tuning for the most expected cases.

Here are the base relations between two intervals, as timelines. 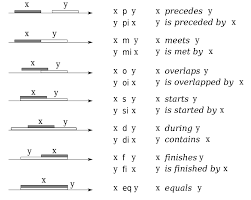 SQL did not add all 13 relationships, but we decided that an overlaps predicate would be the most useful.

where S1 and S2 are the starting times of the two time periods and T1 and T2 are their termination times. The rules for the OVERLAPS() predicate sound like they should be intuitive, but they are not. The principles that we wanted in the Standard were:

1. A time period includes its starting point but does not include its end point. We have already discussed this model and its closure properties.

2. If the time periods are not “instantaneous,” they overlap when they share a common time period.

4. If the first and second terms are instantaneous events, they overlap only when they are equal.

Please consider how your intuition reacts to these results when the granularity is at the YEAR-MONTH-DAY level. Remember that the day begins at 00:00:00 Hrs.

Alexander Kuznetsov wrote this idiom for History Tables in T-SQL, but it generalizes to any SQL. It builds a temporal chain from the current row to the previous row with a self-reference. This is easier to show with code:

Well, that looks complicated! Let’s look at it column by column. Task_id explains itself. The previous_end_date will not have a value for the first task in the chain, so it is NULL-able. The current_start_date and current_end_date are the same data elements, temporal sequence, and PRIMARY KEY constraints we had in the simple history table schema.

The two UNIQUE constraints will allow one NULL in their pairs of columns and prevent duplicates. Remember that UNIQUE is NULL-able, not like PRIMARY KEY, which implies UNIQUE NOT NULL.

Finally, the FOREIGN KEY is the real trick. Obviously, the previous task has to end when the current task started for them to abut, so there is another constraint. This constraint is a self-reference that makes sure this is true. Modifying data in this type of table is easy but requires some thought.

There is just one little problem with that FOREIGN KEY constraint. It will not let you put the first task into the table. There is nothing for the constraint to reference. In Standard SQL, we can declare constraints to be DEFERABLE with some other options. The idea is that you can turn a constraint ON or OFF during a session so the database can be in a state that would otherwise be illegal. But at the end of the session, all constraints have to be TRUE or UNKNOWN.

When a disabled constraint is re-enabled, the database does not check to ensure any existing data meets the constraints. You will want to hide this in a procedure body to get things started.

Please notice that the OVERLAPS and BETWEEN predicates work with static intervals, but there are also dynamic predicates for data. The LEAD and LAG operators view the rows as representing points in time or in a sequence, but that is a topic for another article.

0 7
In this article, I want to talk about a topic that you may never need. The only time I have really had need to look at the bits in a byte pattern. In (what is now) ancient versions of SQL Server didn't have such self-describing columns like in its metadata objects like it does now.… Read more
0 7