When creating a sequence object, only the sequence name argument is required. For any parameter not specified, the default value for that option will be used. I will discuss a few of those default values that might surprise you.

The last one worth mentioning, is the START WITH parameter. This parameter identifies the first sequence number that will be generate. The default value for starting value is determined by the wheter the INCREMENT value is positive or negative. If the INCREMENT BY parameter is negative, then the START WITH value is set to maximum value of data type for the sequence object. For a sequence objects that count up, the default starting value is set to the minimum value for the object’s data type.

For a complete list of all sequence object parameter defaults refer to the Microsoft Documentation.

One of the advantages of using sequence objects is that one sequence object can be used in multiple tables. Suppose you have a business requirement to track issues, where each issue requires a unique issue number. Additionally, the issue number needs to be stored in different tables based on the type of issue.

Listing 2: Inserting a Few Rows into both test tables

Output from running Listing 2 can be found in Report 1.

This example showed one way a sequence object can be used to populate columns in multiple tables. But it also showed how by using a default constraint, you can automatically generate the IssueNumber value without providing that value on an INSERT statement.In Report 1, the first set of records displayed are from the HardwareIssue table, and the second set of records are from the ServiceIssue table. By looking at the IssueNumber column in the output, you can see that each value is unique across both tables.

When the CYCLE option is not specified at creation, as in Listing 1, the sequence number defaults to NO CYCLE. If a sequence object is defined to not cycle, the GET NEXT VALUE function will produce the error in Report 2 when the maximum or minimum value is reached.

Report 2: Error when min or max value is reached

To show how the sequence numbers get recycled, the code in Listing 4 can be run.

The output in Report 3 is produced when Listing 4 is run.

Report 3: Output when Listing 4 is executed

Restarting sequence numbersIn Report 3, the ID values increment up to 2, which is the MAXVALUE setting for the RecycleBy2 sequence object. When the maximum value is reached, the CYCLE option causes the sequence numbers to restart at the MINVALUE, which is 1.

When the sequence number is restarted, the next sequence number generated will be the same as the RESTART value. This can be verified by running the code in Listing 6 and reviewing the results in Report 4.

Report 4 shows that the number restarts.

Output in Report 5 is created when Listing 7 is executed.

Report 5: Output from the final SELECT statement in Listing 7

OVER clause and sequence object

To show how the OVER clause, in conjunction with the NEXT VALUE FOR function works, assume there is a requirement to break up a set of objects into three different groups where each group is assigned a unique group number. The first group will be assigned the group number of 100, the second group 200, and the last group gets 300 as the assigned group number.

The sequence number to support numbering by 100 is created by running Listing 8.

The GroupBy3 sequence object created in Listing 8 will generate 3 different group numbers: 100, 200, and 300. The MINVALUE, MAXVALUE, and CYCLE clauses support cycling through these 3 group values over and over again as new sequence numbers are requested.

To show the OVER clause in action, run the code in Listing 9.

Report 6 shows the output when Listing 9 is executed. Note that the results will vary here except for the groupnum column. 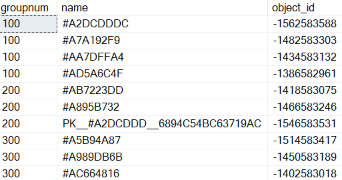 If the code in Listing 7 is run a second time, you will see the results shown in Report 7.I specifically only returned 10 rows in the subquery in Listing 9. I did this to show how the OVER clause associated with the NEXT VALUE FOR function might create grouping sets with different numbers of members. See how groupnum 100 has 4 rows, whereas each of the other groups only have 3 rows. This happened because the 10-row set of objects is not evenly divisible by 3. 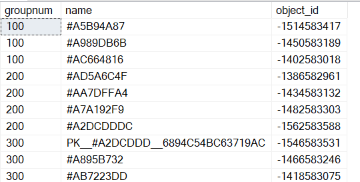 In order to have the code produce exactly the same results each time, the sequence object used in conjunction with the OVER clause will need to be restarted. The code in Listing 10 uses the ALTER SEQUENCE command to restart the GroupBy3 sequence object then runs the same code as used in Listing 9.Now groupnum 200 has 4 rows. Why did this occur? This happened because the last sequence number value of 100 was stored in metadata when the Groupby3 function was used the first time. Therefore when Listing 8 was run a second time, the first group number generated was 200, and the last group number generated was 200. If Listing 9 runs a third time, you would see that groupnum 300 had 4 rows.

Caching sequence numbers uses very little memory. Only two numbers are needed in memory to support caching, the last sequence number used and the number of values left in the cache. The size of those numbers is determined by the data type of the sequence object.

There are three different settings possible for the CACHE options. These three options can be seen by reviewing the IssueNumber sequence object using Object Explorer, as shown in Figure 1. 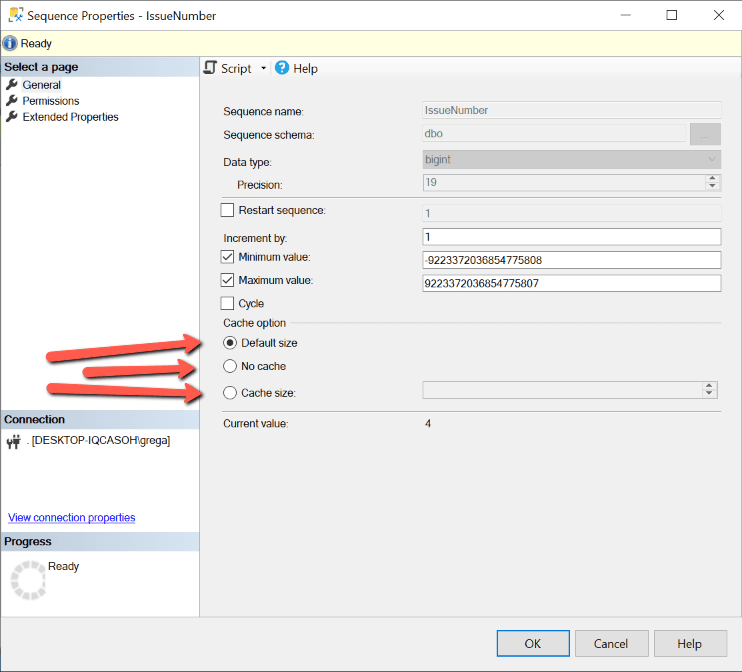 The second cache size option is No cache. When this option is specified, no memory is used to cache sequence values, and I/O will occur to the system metadata to maintain the last sequence number used each time a sequence number is generated.

Insights from the SSRS database

0 1
The SSRS database contains a wealth of undocumented information that can help administrators. In this article, Edward Pollack explains how to get to the data and ways to use it.… Read more
0 1