Showplan Operator of the week – Assert

As part of his mission to explain the Query Optimiser in practical terms, Fabiano attempts the feat of describing, one week at a time, all the major Showplan Operators used by SQL Server's Query Optimiser to build the Query Plan. He starts with Assert

Well my friends, I was wondering how to help you to understand execution plans in a practical way. So I decided that I’d talk about the Showplan Operators.

Showplan Operators are used by the Query Optimizer (QO) to build the query plan in order to perform a specified operation. A query plan will consist of many physical operators. The Query Optimizer uses a simple language that represents each physical operation by an operator, and each operator is represented in the graphical execution plan by an icon.

I’ll try to talk about one operator every week, but so as to avoid having to continue to write about these operators for years, I’ll mention only of those that are more common: The first being the Assert.

Let’s see where the SQL Server uses that information in practice. Take the following T-SQL:

To the command above the SQL Server has generated the following execution plan: 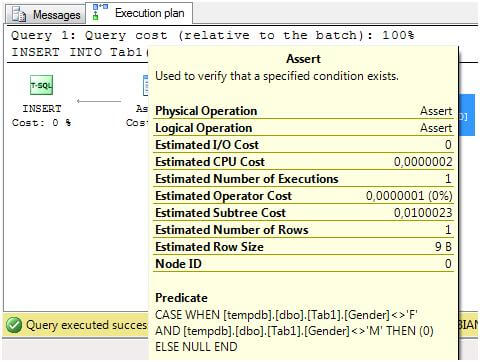 As we can see, the execution plan uses the Assert operator to check that the inserted value doesn’t violate the Check Constraint. In this specific case, the Assert applies the rule, ‘if the value is different to “F” and different to “M” than return 0 otherwise returns NULL‘.

Now let’s take a look at an example where the Assert is used to validate a foreign key constraint. Suppose we have this  query:

Here we can see the Assert operator twice, first (looking down to up in the text plan and the right to left in the graphical plan) validating the Check Constraint. The same concept showed above is used, if the exit value is “0” than keep running the query, but if NULL is returned shows an exception.

The second Assert is validating the result of the Tab1 and Tab2 join. It is interesting to see the “[Expr1007] IS NULL“. To understand that you need to know what this Expr1007 is, look at the Probe Value (green text) in the text plan and you will see that it is the result of the join. If the value passed to the INSERT at the column ID_Gender exists in the table Tab2, then that probe will return the join value; otherwise it will return NULL. So the Assert is checking the value of the search at the Tab2; if the value that is passed to the INSERT is not found  then Assert will show one exception.

If the value passed to the column ID_Genders is NULL than the SQL can’t show a exception, in that case it returns “0” and keeps running the query.

You can see from this text showplan that SQL Server as generated a Stream Aggregate to count how many rows the SubQuery will return, This value is then passed to the Assert which then does its job by checking its validity.

Is very interesting to see that  the Query Optimizer is smart enough be able to avoid using assert operators when they are not necessary. For instance:

For both these INSERTs, the Query Optimiser is smart enough to know that only one row will ever be returned, so there is no need to use the Assert.

Well, that’s all folks, I see you next week with more “Operators”.