DBAs can control many aspects of SQL Server’s behavior with trace flags. In this article, Robert Sheldon explains how to enable SQL Server trace flags.

You can turn trace flags on or off manually, or you can add them to SQL Server’s startup parameters, so they’re enabled whenever you launch the service. Trace flags can be enabled at the global, session, or query scope, depending on the individual trace flag. The scope determines the extent of a trace flag’s impact on server connections:

When you enable a trace flag manually, you must choose the specific scope. Some trace flags are available at all three scopes, while others are limited to only one or two.

Before enabling a trace flag, you should fully understand what it does, how it works, and its potential impact on your system. For example, trace flag 7470 enables additional computations for memory grants required by sort operators. If you were to view details about this trace flag in DBCC TRACEON – Trace Flags, you would discover that it supports all three scope levels but that it applies only to specific SQL Server versions. You would also find a link to a related Microsoft Support article, as well as a warning about the memory impact on concurrent queries.

Before implementing any trace flag in a production environment, carefully review all Microsoft information and recommendations and learn what you can from other reliable sources. Microsoft recommends that you thoroughly test any trace flags that you plan to implement in a production environment before enabling them in that environment. Trace flags can have unpredictable consequences and should be deployed with care.

Trace flag 2301 implements advanced optimizations that help boost decision support queries executing against large data sets. When you run this statement, the database engine returns the message shown in Figure 1 (but with the appropriate timestamp).

If you want the statement to return only a basic message (and not the information about errors), you can include the WITH NO_INFOMSGS option:

Now the statement returns the message shown in Figure 2.

Whether or not you include the WITH NO_INFOMSGS option, you should use DBCC TRACEON only when users and applications are not running queries concurrently against the platform.

After you enable a trace flag, you can verify its status by running a DBCC TRACESTATUS statement, specifying the trace flag number and the value -1 to indicate that the trace flag is global, as shown in the following example:

The statement returns the results shown in Figure 3.

Figure 3. Viewing the status of a global trace flag

The results returned by a DBCC TRACESTATUS statement include four columns:

As with the DBCC TRACEON statement, you can also include the WITH NO_INFOMSGS option with a DBCC TRACESTATUS statement to return a simplified message

To disable a trace flag at the global level, you can use a DBCC TRACEOFF statement, again specifying the trace flag number and the value -1 to indicate that the trace flag is global, as shown in the following example:

Be sure that you include the -1 argument, or the trace flag will remain enabled. To verify that the trace flag has been disabled, you can run the same DBCC TRACESTATUS statement you ran before:

This time, the Status, Global, and Session columns should each show a value of 0.

As with the DBCC TRACEON and DBCC TRACESTATUS statements, you can also include the WITH NO_INFOMSGS option with a DBCC TRACEOFF statement to return a simplified message

In some cases, you might want to enable multiple trace flags at the same time. You can still use a single DBCC TRACEON statement. For example, the following statement enables trace flags 715 and 2301 at the global level:

You can then check the status of the trace flags in much the same way:

This time, the DBCC TRACESTATUS statement returns two rows, one for each specified trace flag, as shown in Figure 4.

You can take the same approach to disable the two trace flags:

Again, you can verify that the trace flags have been disabled by running the DBCC TRACESTATUS statement.

When you use a DBCC TRACEON statement to enable trace flags at the global level, they remain enabled until you manually disable them or until you restart the SQL Server service. However, you might want the trace flag to be enabled automatically when the service gets restarted. In this case, you can add the trace flag as a startup parameter, using the -T switch and specifying the trace flag number, as in the following example:

To add a trace flag as a startup parameter, you can use SQL Server Configuration Manager, taking the following steps: 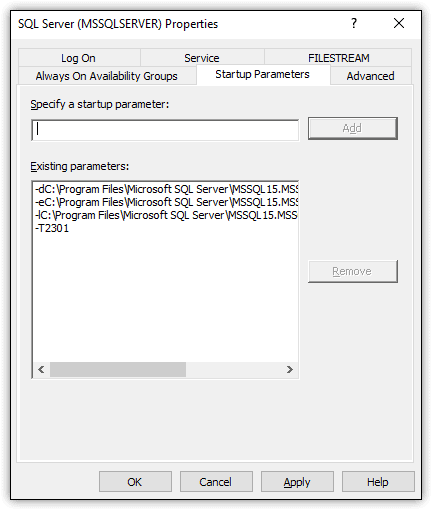 Figure 5. Adding a trace flag to the startup parameters

After adding a trace flag as a startup parameter, you must restart the service for it to take effect. You can then verify that the trace flag has been enabled by once again running a DBCC TRACESTATUS statement.

If you want to remove a trace flag from the startup parameters, select it in the Existing parameters list, click Remove, and click OK. You must again restart the service for your change to take effect.

The DBCC TRACESTATUS statement should now return a Global value of 0 and a Session value of 1, just the opposite of a global trace flag, as shown in Figure 6.

Figure 6. Viewing the status of a session trace flag

Because the trace flag was enabled at the session level, it is available only to the current connection, and it is enabled only for as long as the connection exists. If you were to run the same the DBCC TRACESTATUS statement from a different connection, the Status, Global, and Session columns would each show a value of 0.

To disable a trace flag at the session level, you can run a DBCC TRACEOFF statement from the same connection used to enable that trace flag, as in the following example:

As before, you can verify the trace flag’s status by running a DBCC TRACESTATUS statement, which should now return a value of 0 for the Status, Global, and Session columns.

The approach you take with query trace flags is different from global and session trace flags. You do not use the T-SQL statements you saw earlier and instead add the QUERYTRACEON query hint to your statements. The query hint is limited to Query Optimizer trace flags, representing only a small portion of the documented trace flags.

As you saw earlier, after you enable these or any other trace flags, you can verify their status by running the necessary DBCC TRACESTATUS statements. I did not mention that you can run the statements without specifying the specific trace flags, making it easier to determine which trace flags are currently enabled, no matter how many have been enabled or whether or not you enabled them.

If you take this approach, be aware that it’s not always clear whether to use the -1 argument. According to SQL Server documentation, running a DBCC TRACESTATUS statement without any arguments returns “all the trace flags that are enabled for the current session.” On the other hand, including the -1 argument returns “all trace flags that are currently enabled globally.” But if you run the following statements together, you’ll quickly see that the results don’t correspond to the documentation: 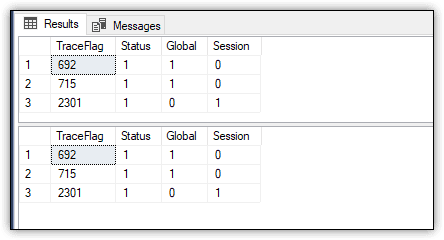 After running a number of a DBCC TRACESTATUS statements with and without the -1 argument, I could find no differences in the results. And it appears that I’m not alone in my observations. According to Jason Brimhalls’ article Capture the Flag – The Trace Flag, “The -1 parameter does not return the appropriate result set and that is reproducible…The use of that parameter value still returns session flags as well.” I’ll leave it up to you to determine which approach to take.

In the meantime, let’s return to the query trace flag and how to use the QUERYTRACEON query hint. The following SELECT statement retrieves data from the WideWorldImporters sample database:

The statement includes an OPTION clause that specifies the QUERYTRACEON query hint, which specifies trace flag 1211. If you run the SELECT statement in SSMS, you can use the Actual Execution Plan feature to verify that the trace flag has been applied to the statement.

After you run the statement, go to the Execution plan tab, right-click the SELECT component, and click Properties. In the Properties pane, expand the TraceFlags node to view the trace flags that were enabled when you ran the SELECT statement. You should see information similar to what is shown in Figure 8 (outlined in red). 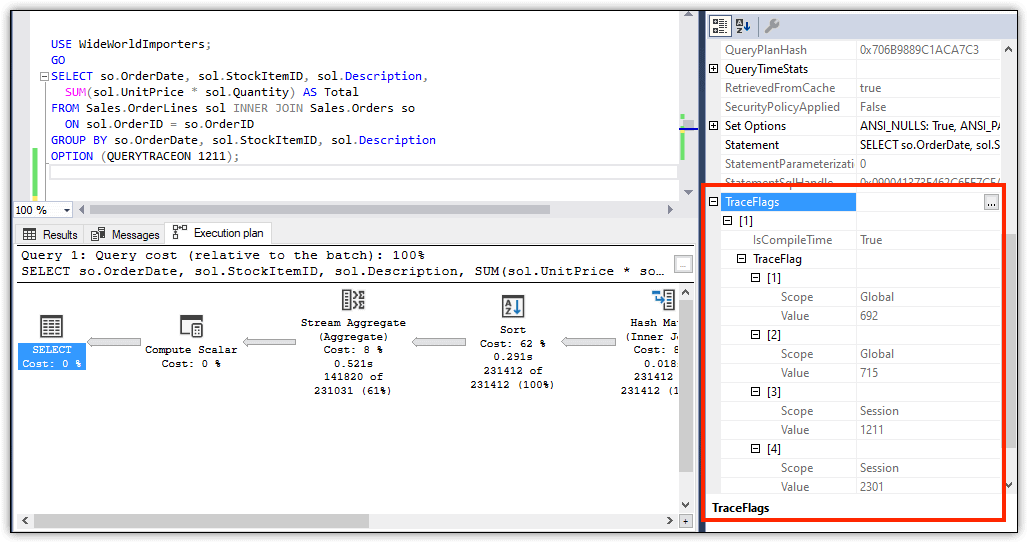 When you run this statement, the Status, Global, and Session columns should each show a value of 0, indicating that 1211 was not enabled as a global or session trace flag.

Despite the interface terminology, it’s apparent that trace flag 1211 was deployed at the query level, which means that it has no impact outside the SELECT statement itself. You can verify this by rerunning the SELECT query, but without the OPTION clause. This time, trace flag 1211 should not show up in the execution plan.

In the meantime, the other trace flags are still enabled, but you can disable them by running the following DBCC TRACEOFF statements.

As with other trace flags, you can also run a DBCC TRACESTATUS statement to verify that the trace flags have been disabled. If no trace flags are enabled, you’ll receive a generic DBCC message stating that the execution is complete.

Trace flags can provide you with valuable tools when working with SQL Server, but you shouldn’t use them lightly. You might enable a trace flag to improve query performance for one application, only to discover it brings another application to its knees. You should also be aware that there is no way of knowing when Microsoft might remove a trace flag from a future release, so be sure to verify that the trace flags you’re using are still supported when moving to a new SQL Server version, especially if you’ve added trace flags as startup parameters. This issue aside, you might still find trace flags useful to your current operations, but be sure you fully understand how they work and what impact they might have before deploying them into production.