With Amazon RDS, it’s easy to have a SQL Server running in minutes. There are some limitations, though. Seth Delconte explains a workaround to overcome one of the limitations: the inability to restore a second copy of a database to recover missing data.

Amazon Web Services (AWS) provides highly available, highly managed SQL Server instances through the Relational Database Service (RDS). Using RDS instances greatly reduces much of the administrative need for managing backups, minor upgrades, and monitoring. However, these conveniences come at a cost: limited administrative permissions and functionality. One such limitation that requires a workaround becomes obvious when attempting to restore a copy of an existing database to the same SQL Server instance.

One probable reason for needing multiple copies of a database on the same server might be to maintain separate database environments for development and testing, especially if using additional servers isn’t an option. Another reason might be data recovery – if data is deleted or otherwise missing, it may be necessary to temporarily restore a new copy of a database (from either a RDS snapshot or from an existing native backup file), recover the missing data, and then drop the duplicated database.

To demonstrate the RDS limitations and a workaround method, this article will develop a scenario where data has been deleted from a specific table in a RDS database. The objective is to recover the missing data using this method.

NOTE: This exercise should not be performed on a production RDS instance until it has been tested on a development instance. See the warning in the ‘Import the BACPAC’ section.

For this example, you will create an initial AdventureWorks2016 database from the online sample .bak file (our first instance of the database). You’ll then simulate a data loss and attempt to restore a temporary copy of the database (using the same .bak file) from which to recover the missing data.

First, log into your SQL Server RDS instance, using the instance endpoint as the server name: 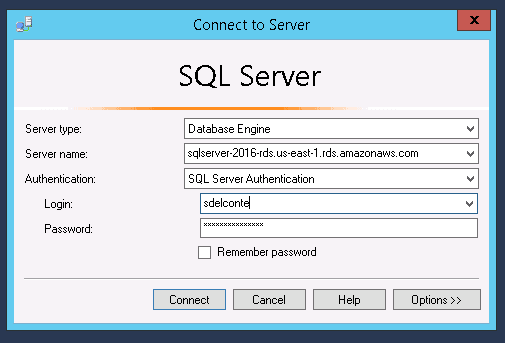 Next, download the online sample .bak file and upload it to your S3 bucket: 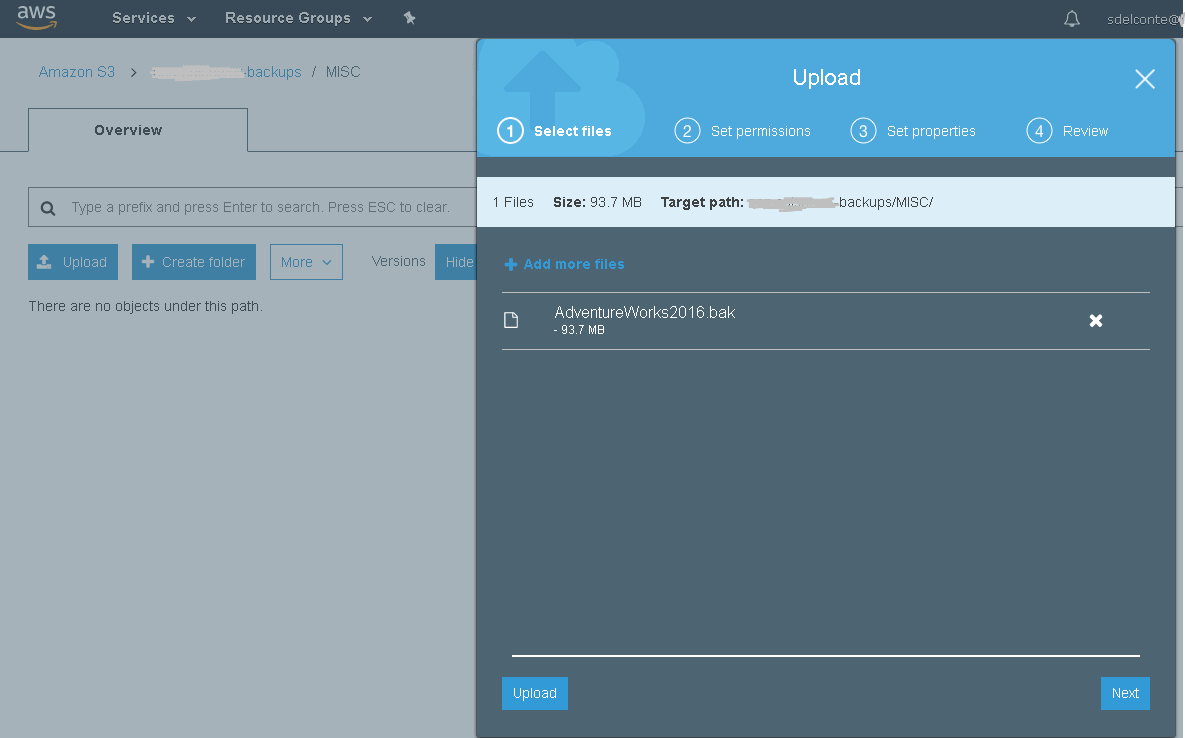 Once the file has been uploaded, make a note of the S3 path, in this case backups/MISC.

You can now initiate a manual database restore using the built-in RDS procedure rds_restore_database. In Management Studio, run the following statement replacing the path if yours is different:

IMPORTANT: the path value in the @S3_arn_to_backup_from parameter is case-sensitive. For example, setting the value to ‘arn:aws:s3:::backups/misc/AdventureWorks2016.bak’ will not work.

If Native Backup and Restore Option has not yet been configured for your RDS instance, you will get an error, Database backup/restore option is not enabled yet or is in the process of being enabled. Please try again later, when attempting to use the rds_restore_database procedure:

Per AWS documentation, an option group associated with the RDS instance must have the SQLSERVER_BACKUP_RESTORE option added. To do this, you’ll need to create a new option group by navigating to Option groups and clicking Create a group. Then enter a name for the option group, a description, the SQL Server engine (Enterprise, Standard, etc.) and version you are using. Then click Create: 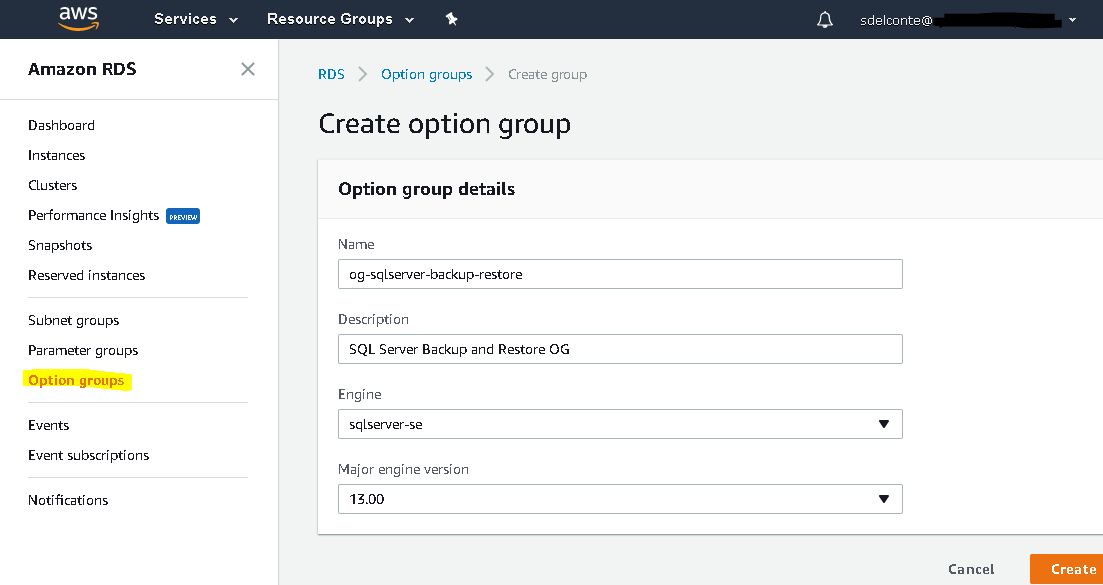 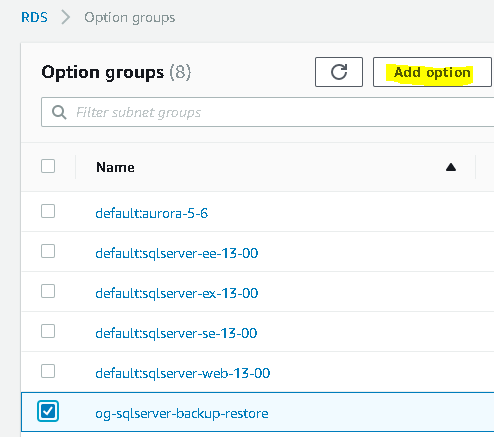 The only available option is the SQLSERVER_BACKUP_RESTORE option, the one that you need. Make sure that Create a new role is selected, enter a name for the new IAM role, and select an existing or create a new S3 bucket. Select Apply Immediately and then click Add Option: 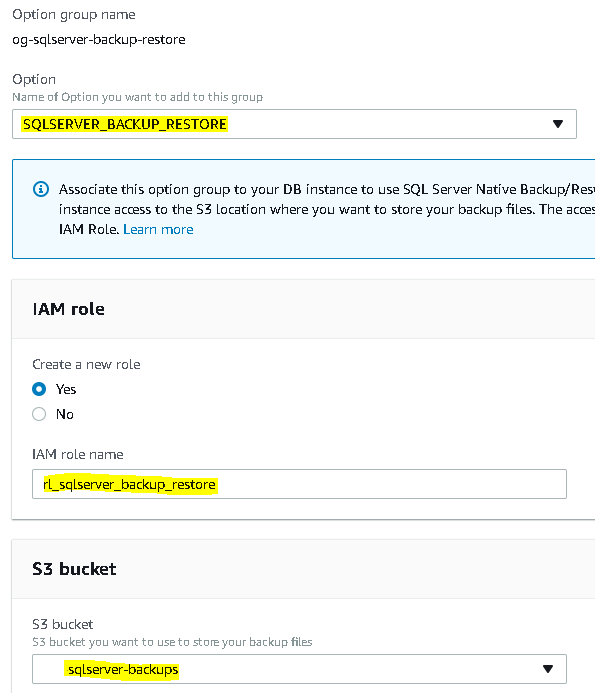 Take a look at the new sqlNativeBackup policy (IAM/Policies, then select sqlNativeBackup) that was automatically created for the new IAM role (rl_sqlserver_backup_restore). On the {} JSON tab, you can see the Action allowed on the Resource (S3 bucket): 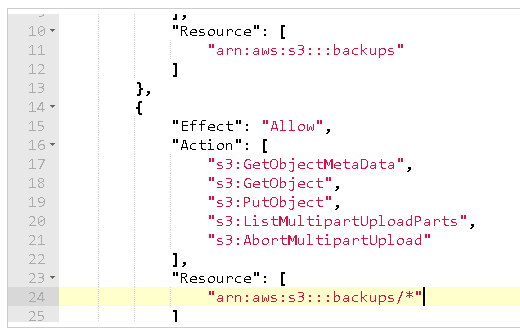 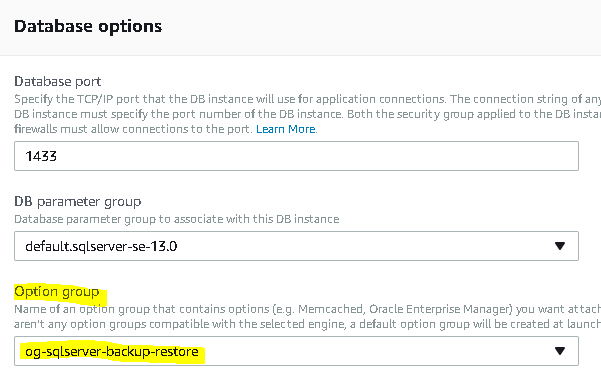 Click Continue. Select Apply immediately, and then Modify DB Instance. Even after completing the steps, it may take several minutes to go into effect.

At any time during the restore, you can check the status using the rds_task_status procedure in another query window:

During the restore, the lifecycle column will show a value of IN_PROGRESS:

When the restore is complete, the lifecycle column will return SUCCESS.

The new database will be visible in Object Explorer:

To simulate missing data, delete 500 records from the DatabaseLog table:

…but the restore ends with a lifecycle value of ERROR upon checking the rds_task_status procedure:

You can see that the RDS limitation’s root cause is the inability to allow the same database unique identifier (file_guid) more than once on the same instance – and since the AdventureWorks2016 database’s original file_guids are contained in the backup file, any databases restored from it has that same file_guid. You would have the same issue even if you attempted a restore from a fresh backup of the database. Database file_guids can be viewed by selecting them from a database’s sys.database_files table:

Amazon acknowledges this issue in the Importing and Exporting SQL Server Databases online user guide – which says that it is not possible to create a copy of a database to the same instance. According to the guide:

Restoring a new RDS instance from a snapshot would make missing data available, but might also expose other limitations. For example, using a linked server connection would allow data transfer between two RDS instances, but linked servers appear to be unsupported in RDS at the time of this writing. An attempt to create a linked server generates the error below:

However, it is possible, using a known workaround, to create and maintain concurrent, identical databases on the same RDS instance. This workaround entails using the Export Data-Tier Application module in SQL Server Management Studio (SSMS) to create an export of a database to a .bacpac file. A BACPAC export can contain either an entire database or just specific objects, and can be used for importing data to Azure, AWS, and conventional SQL Server instances – and also for data archival purposes. A TechNet article describes a .bacpac file:

When a .bacpac file is generated and imported, the database’s file_guids are reset – which is exactly what is needed to allow a duplicate database in RDS.

Once the restore is complete, you can see the new database in Object Explorer:

When you check the file_guids of the new database, you’ll see that it has exactly the same file_guids as the copy you restored to the RDS instance (the name value is the logical name of the file, not the renamed file path name): 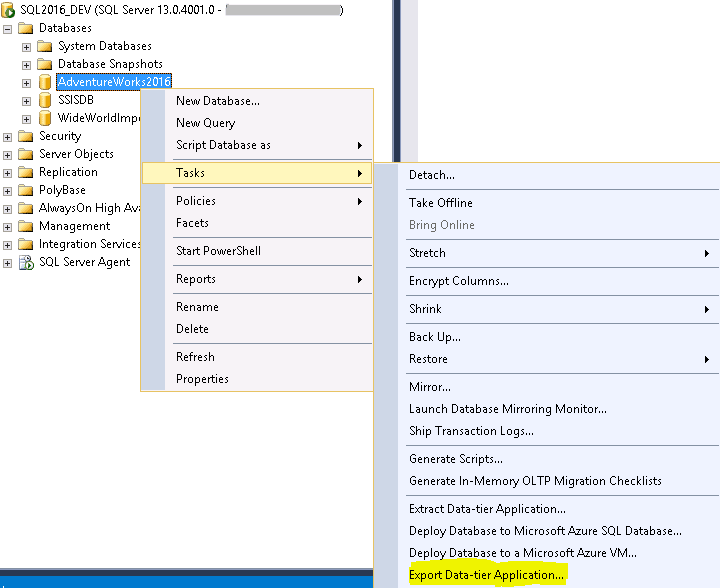 On the Introduction page, click Next. On the Export Settings page, click Browse to select a filename and location for the BACPAC export. Keep the default location, and name the export AdventureWorks2016.bacpac: 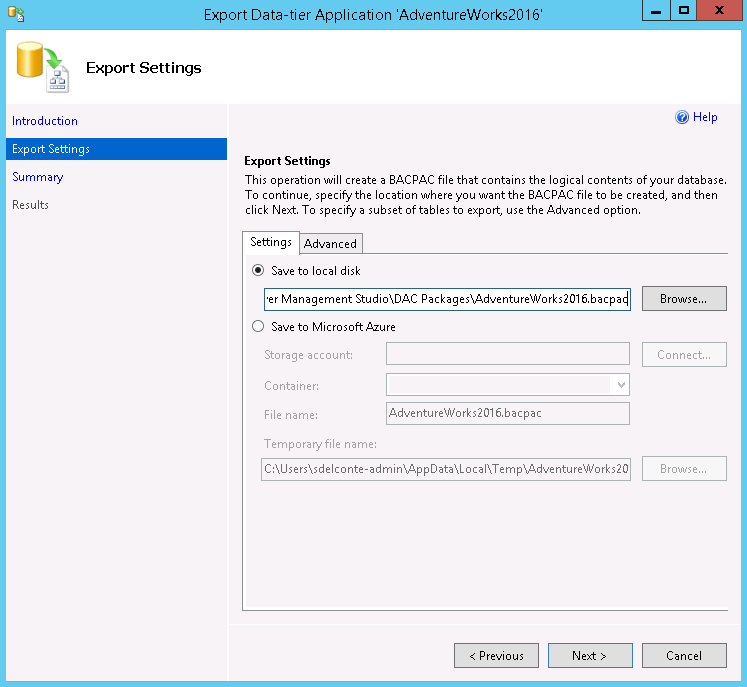 Since you only need to recover data from a single object (the DatabaseLog table), select that object only in the Advanced tab. This will minimize the recovery time by reducing the size of the export file. 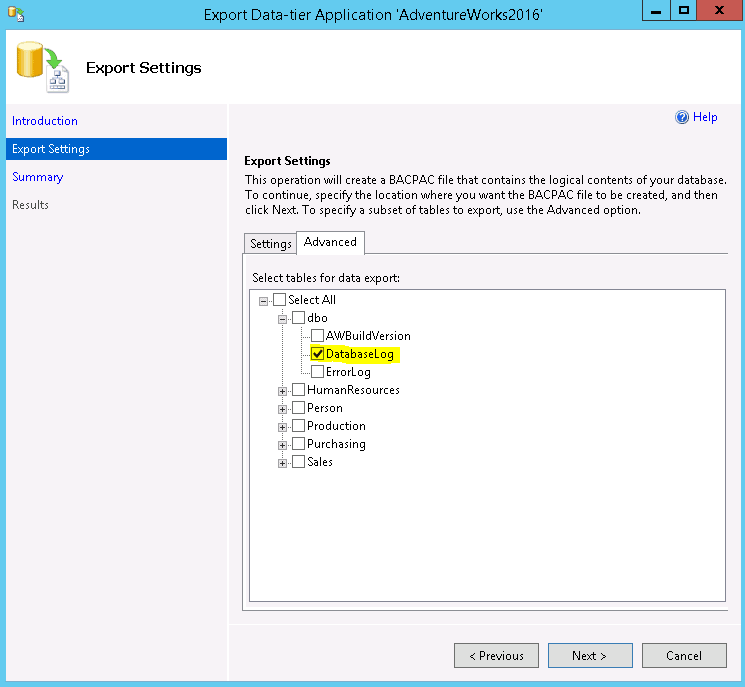 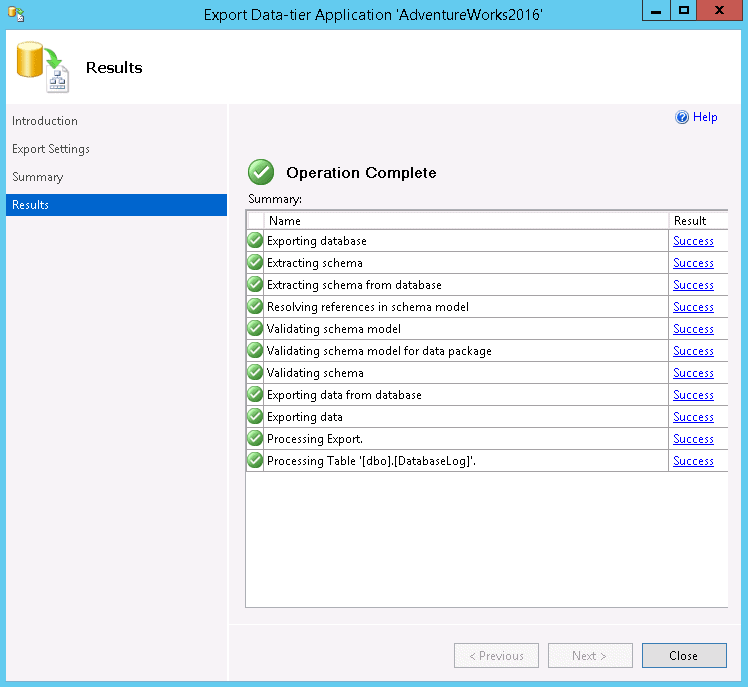 Check the summary of the processes on the Results page and click Close. The BACPAC export is complete.

The next step will be to immediately import the file back to the same instance as a new database in order to reset the file_guid.

WARNING! You could attempt to import the .bacpac file directly back to the RDS instance, but even though RDS supports BACPAC exports (and imports using files generated from the same instance – see the note at the end of this article), a BACPAC file imported to RDS that was exported from a different instance can fail with the following error (at the time of this writing), leaving behind an empty database that cannot be easily removed: 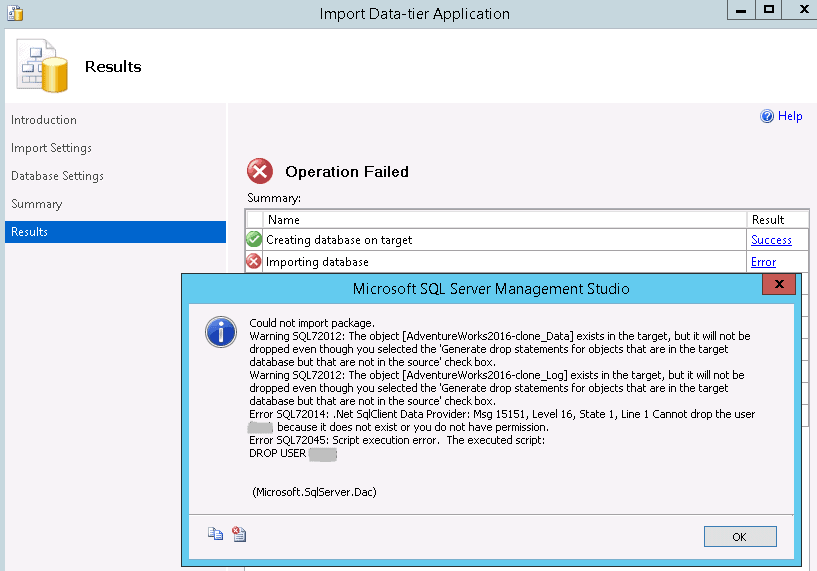 Attempting to drop the empty database that is left behind results in the below error:

For this reason, it is highly recommended to restore a new RDS instance from a snapshot to use for practicing the BACPAC import process before performing it on a production system.

To avoid the ‘empty database’ scenario, you will perform the actual BACPAC import to a new database on the on-premises SQL2016_DEV instance, create a native backup from that new database, and then backup and restore it to the RDS instance. That way, you won’t risk a BACPAC import failure. 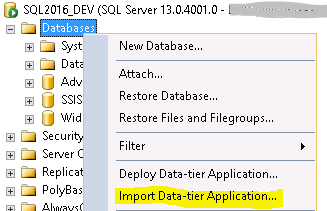 On the Introduction page, click Next. On the Import Settings page, browse to the .bacpac export file and click Next: 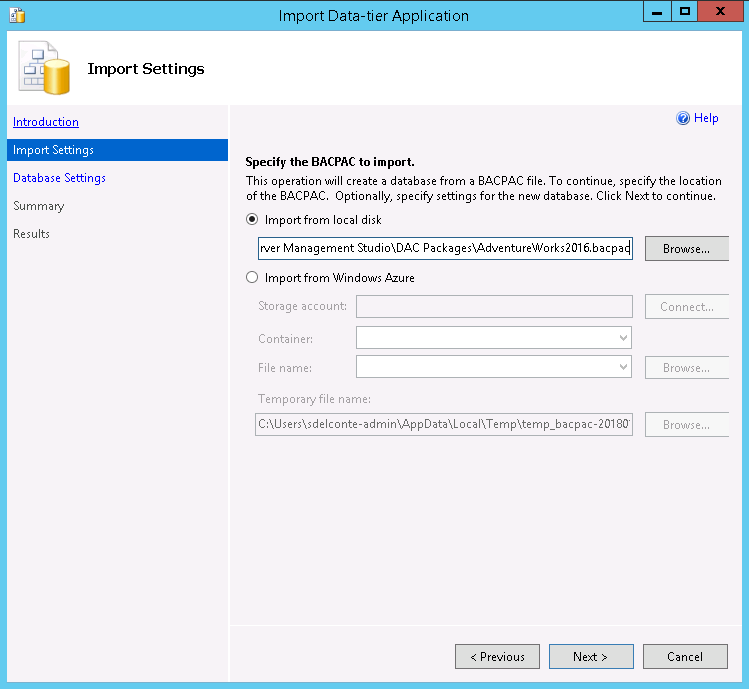 On the Database Settings page, enter a name for the temporary copy of the database on SQL2016_DEV, click Next, and then Finish: 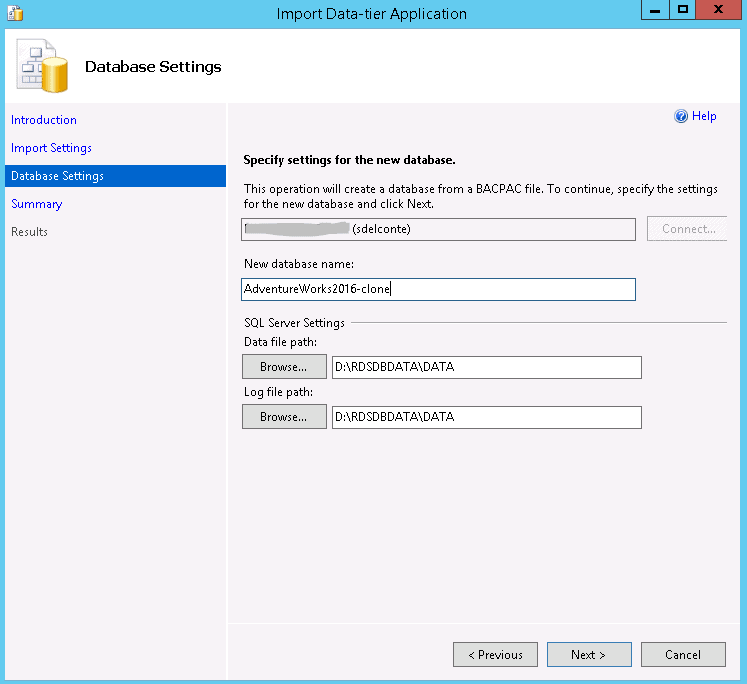 You will quickly find out that the BACPAC import process is very sensitive to a few factors – one of these being full-text indexes. The import process will fail with a ‘Full-text Search is not installed, or a full-text component cannot be loaded’ error, if your SQL2016_DEV instance does not have the Full-text search component installed. Why does this generate such an error on tables when no such tables are included in the BACPAC export? This is because, even though the BACPAC export does not export data from excluded objects, the object schema is still part of the export. You can verify this after the unsuccessful BACPAC import. 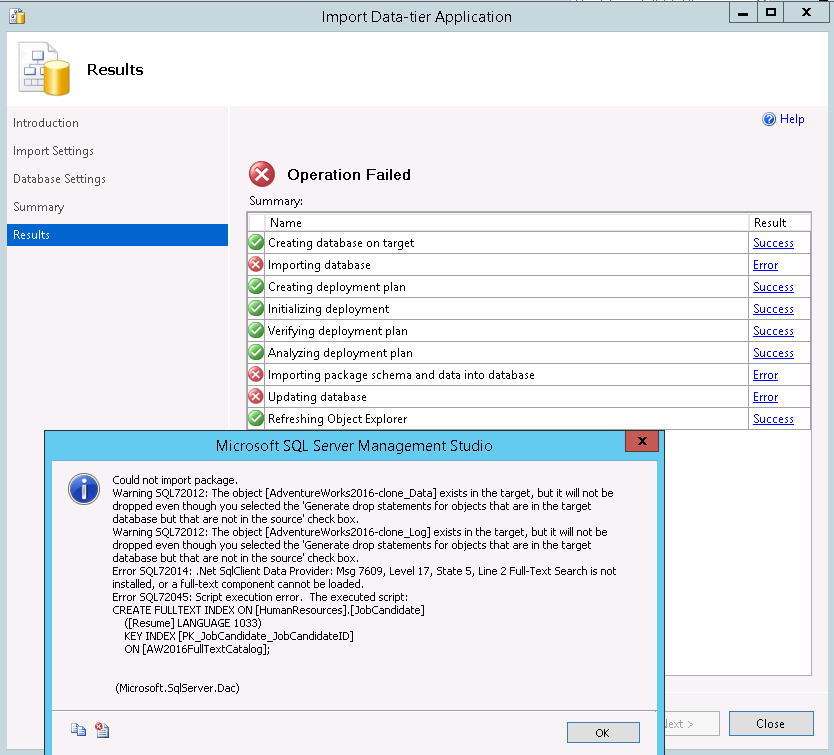 Since the goal is to recover missing data only and not full-text indexes, you can circumvent this error without installing Full-text Search. Generate a dynamic SQL script to drop all full-text indexes in the AdventureWorks2016 database on the SQL2016_Dev server, execute the script, then export and import the .bacpac file again:

Now that you have generated the appropriate DROP statements, copy and execute them:

Export the .bacpac file exactly as before, and immediately import it back to SQL2016_DEV to reset the file_guids. The process is successful this time: 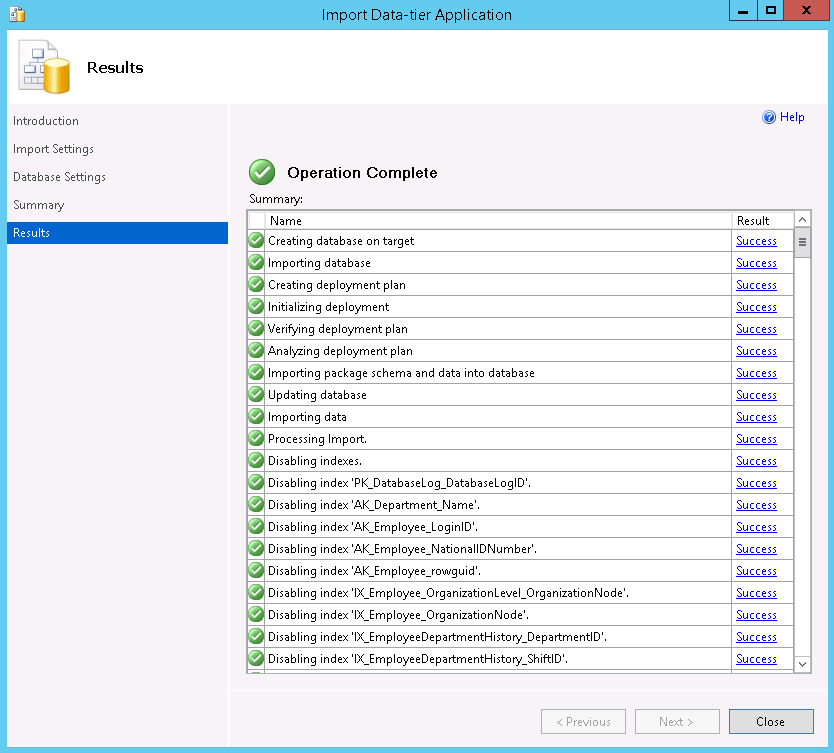 You will see that the new database has brand new file_guids after the BACPAC import. The RDS instance will now accept AdventureWorks2016-clone as a new database.

Now back up the new database so you can upload it to you S3 bucket:

Notice how much smaller the new backup file is now, since you’ve only exported data for one table: 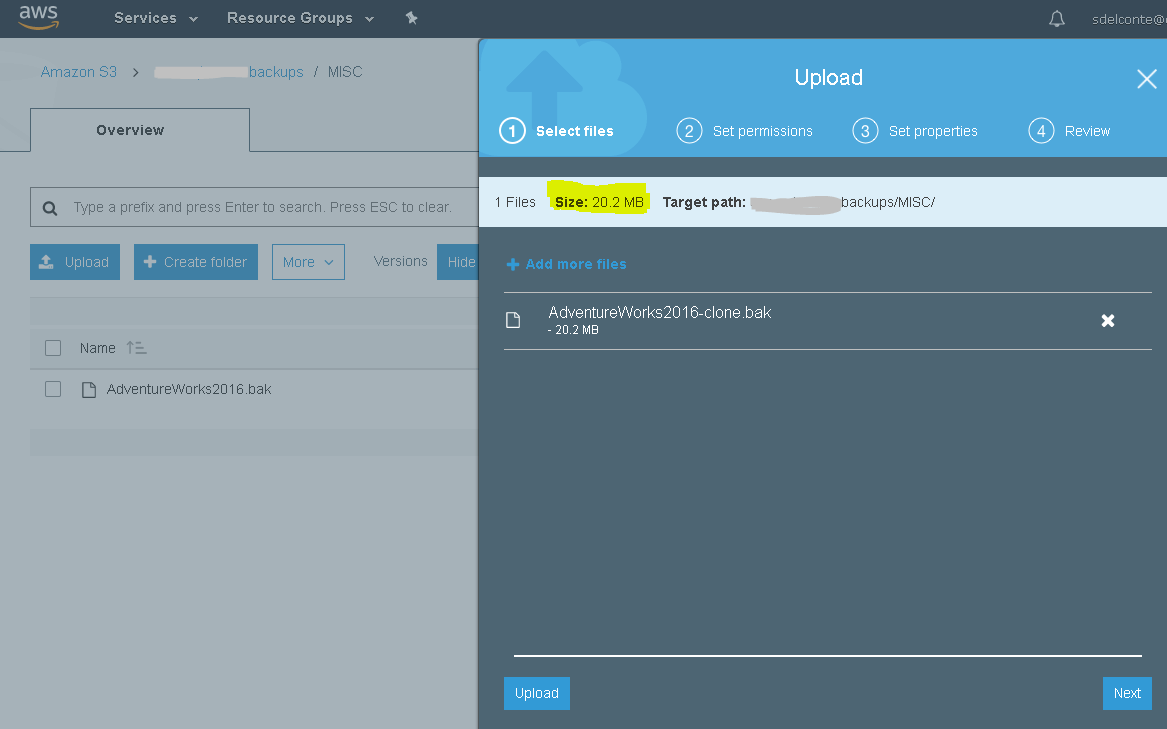 Connect back to the RDS instance and try the database restore in SSMS now that you have reset the file_guids:

The rds_task_status procedure returns a lifecycle value of SUCCESS.

You can see the new database in the Object Explorer pane:

You’re now able to recover the missing DatabaseLog data by joining the original table to the restored one:

Now that you’ve successfully recovered the missing data, clean up by dropping the duplicated database from the RDS instance. If Multi-AZ (mirroring) is in place for the instance, you’ll have to break the mirror partner before dropping the database:

You’ve completed the steps necessary to recover missing data from a database object in a SQL Server RDS instance using the BACPAC export method using these steps. For reference, the instructional steps are condensed here as follows:

NOTE: If you didn’t need to recover data, but simply wanted a copy of an existing RDS database, you could perform a BACPAC export, then import the .bacpac file immediately to the same instance it came from as a database copy with a new name – the empty database issue does not seem to happen when the BACPAC import is from a file that was exported from the same instance.

0 7
The AWS Elastic Beanstalk feature is a web application provisioning service that allows you to automatically scale as needed. In this article, Gerald Bauer explains how to set up and configure Elastic Beanstalks through the AWS dashboard and Visual Studio. … Read more
0 7