Laerte recently experienced an I/O nightmare, which, as a happy accident, gave him an opportunity to test out the 'Missing Indexes' DMVs and see if they were up to scratch. He solved his problems, ran a few tests to get a feel for how well the DMVs performed, and was very impressed. So much so, that he is sharing his findings with us.

Editor’s Note: As these screenshots incorporate elements of Brazilian Portuguese, please bear in mind that the word ‘Codigo’ means Code, and for consistency we’ve decided to use the Portuguese term whenever refering to the columns in the test database this article features.

Here was the scene to start with: The client had purchased a really nice, latest-generation server (SAN and Blade, 32 GB RAM, 16 processors, W2K8 64, SQL2K8 64), and the whole disc apparatus was set up according to Microsoft best practices (block size of 64K, stripe size of 128K, set raids 0+1 to separate log and data).. But some counters were completely out of the ordinary. On one of the more accessible databases (Approx 400 GB – out of a total of almost 4 TB of user Databases), the disk readings were really quite scary:

To be honest, I only looked at the % Disk Read Time because it seemed pretty extreme. I couldn’t really tell what the norm was in this case, but the counter was very, very high, so I assumed there was a problem even though 100+% Disc Read Times are fairly normal in RAID arrays:

“This behavior can occur because some controllers allow the operating system to use overlapping input/output operations for multiple outstanding requests…  If you have multiple disks in a Raid arrangement, the overlapped input/output happens because the operating system can read and write to multiple disks, and this could show values that are higher than 100 percent for this counter.“
– Microsoft Support Knowledge Base

I haven’t included all the counters I looked at here, just the more interesting ones. Obviously the ‘normal’ values for these counters are not hard rules; I would not be concerned if the values were 20 – 30% above these (partly because I did not have any baselines set up- as we say in Brazil, I “fell from an airplane” into this project). But as you can see, that wasn’t exactly the case, and the values were pretty strange – Daily averages of ‘lumbering-dinosaur’ disk read times, absurd disk queues and ridiculously low page life expectancies. If you’re interested, you can read more about these metrics over at Microsoft TechNet, here, here and here.

(I automated this collection rather nicely- The Perfmon captured data from this database to a .csv file in 15 seconds, and a SQL Server job uploaded that file into a table. I will be posting this routine at a later date, as it is very simple and functional, and I am always in favor of simplicity)

The worst thing about this situation was that in two days time we would be getting 4 more subsidiaries and an online Warehouse. There’s no way the disc would bear up to that kind of load, so I had two days to do something drastic. I could investigate with the Profiler easily enough, but there was no way I’d have time to rewrite the queries (which were very poorly written; the cursors looked like Christmas lights, and anyone who knows me knows that I think of them). Basically, I needed some kind of miracle, and luckily that’s exactly what was available in the fantastic “missing indexes” DMVs. In case you’ve never seen these before, they are:

You can find out more about them here. Now, I’m all for not reinventing the wheel, so I went to my SQL Server bible, SQLServerCentral, to find an implementation. I found the Util_MissingIndexes script by Jesse Roberge (with many thanks for the author) which, taking a table as a parameter, “reports stats on what the query optimizer records in the DMVs as ‘missing indexes’, and what it says the cost savings will be if they were present“. It returns a few columns, but the most important are:

The columns that were used in my case were user_seeks, last_user_seek ,avg_user_impact and, obviously, columns suggested as an index. Before I show you what these DMVs can do, I’ll cut to the chase now and tell you that, on the day that the subsidiaries and Warehouse were due to be brought online, and with two hours to spare, I finished the improvements and the (massively) improved counters were:

When I set out to solve this problem, I focused on the avg_user_impact and user_seek columns because I was more interested in improving 40% of queries by a factor of 50 than 90% of queries by factors of just 2 or 3.  Admittedly, once I was done with that I had a second job of reviewing the unused and little-used indexes, review queries, take off cursors etc., but that’s an ongoing project, and not something I’m going to even mention here. I didn’t bother with fill factor at this point (although it is very important) because I just didn’t have time to analyze the load that these indexes would come under. As it turns out, I would be in a better position monitoring them after they were being used, and this is something I’ll tell you about another time.

To tell the truth I was expecting an improvement, just not one like this, as I am deeply skeptical of anything suggested automatically. Sure, I’ll use the Index Tuning Wizard very occasionally, but I really prefer to manually review queries. In this case, because of those phenomenal improvements to the numbers, I decided to understand a little more about these DMV’s, and I had some questions:

Does the Query Optimizer know what it’s doing?

To help slake my curiosity, I decided to do some tests. I created a table of 1000000 rows with different selectivity between the columns:

… and then populated the columns:

Then I ran the Missing Indexes process:

No suggestions yet, so I ran this query next:

Still no suggestions; the clustered index was used. Moving on to the next test, with this query…

… Woohoo! I had something:

I ran the query again…

It looks like we can trust the updates to the user_seek and last_user_seek Columns, so that was my first two questions pretty quickly answered – so far so good. Using the result of that little procedure, I could also see that some columns had been suggested as indexes:

Why was the equality_columns suggestion null, you ask? Because of my query conditions, which didn’t use the equality operator (=), but rather “between …” operators which were populated with values.

SQL server does not always need to go into the data pages to respond to a query if  the columns requested by the query are fully “covered” or documented in the index, hence the term “covered index”. If they are not covered, SQL server has to go to the data pages to return the missing columns. This process is called BookMark Lookup (SQL2K) or RID Lookup (SQL2K5), and is computationally expensive to perform.

Yet the index order suggested by the Optimizer was Codigo2, Codigo3 and not Codigo3, Codigo2, as I wrote in my WHERE clause, and this could potentially be an ‘expensive’ index. Clearly, in this case. the order would not affect the use of the index, but the optimizer is smart enough to switch the order around if necessary, so there must have been some reason for the ordering. I created the index as suggested to see if I could figure it out:

As you can see, the suggested index did not appear, so I decided to take a look at the IO statistics and execution plan: 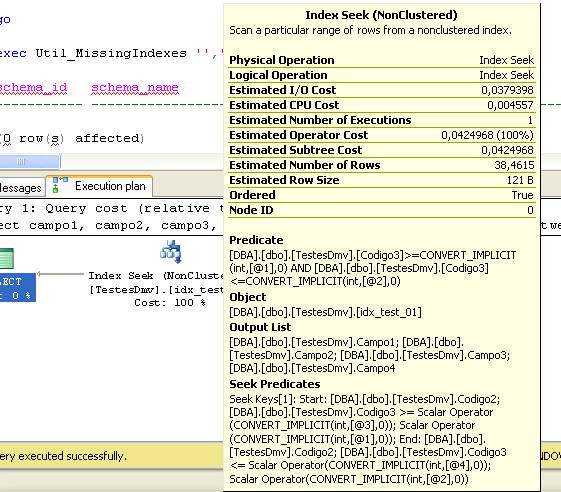 Now that I had another benchmark to compare against, I switched the order of the WHERE clause to Codigo3, Codigo2, and the result was: 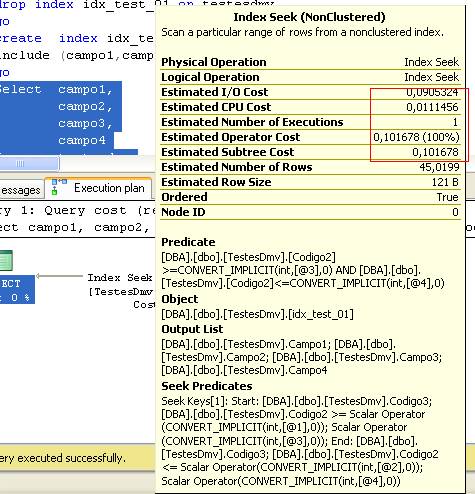 You can see that besides the logical reads, the CPU and IO costs increased, so it looks like the query optimizer knows what it’s doing. Next I needed to try using a WHERE clause with the equality operator.

As before, there was only data in the inequality column because the WHERE clause only had equality conditions. And also as before, the columns suggested as indexes were in a different order from the WHERE clause. At this point, I decided to investigate from a different angle – I wanted to see the selectivity of these columns, using a script written by Nilton Pinheiro.

So, what would the selectivity of the Codigo3 and Codigo4 columns be?

It turns out that the Codigo3 column was much more selective than Codigo4 – Another goal for the optimizer! But now I wondered what would happen if I had one WHERE clause using both equality and inequality conditions?

By now I was pretty convinced that the optimizer knew what it was doing. In this case, I would simply create the index, putting the equality columns first and inequality after them, as we can find in the best practices on BOL:
Use the following guidelines for ordering columns in the CREATE INDEX statements you write from the missing indexes feature component output:

…so the index should always in this order (equality first and inequality after).

So, my third question was now answered – The Optimizer does not use the ordering of the WHERE clause, but rather suggests the best indexes based in your statistics (By this point, I did not expect anything less from the optimization team).

Finally, I wanted to see if the avg_total_user_cost value really was consistent with real performance:

I created the index…

And ran the same query again, to see these results:

Well, given that the predicted avg_user_impact was 98.71%, and I had 4471 ms brought down to1308 ms, the data from DMVs was pretty close. My last question was answered – The avg_total_user_cost is a ‘real’ number, or at least is very, very near the mark.

This is possibly one of the better features included in SQL Server. Obviously these indexes are only suggested, and we have to bear in mind a few other concerns too, like the fact that all INSERT, DELETE and UPDATE operations will be affected by these suggestions and may become very slow if we create too many indexes on the table. Nor can we forget that these indexes will also be using disk space. So analyze the potential impact before creating the them, but one thing I can tell you for sure is that we can trust the data of the “Missing indexes” DMVs. I hope this fantastic feature can help you like it helped me.

If you work with SQL Server 2000, then you know how painful it is to triage a server that has "gone astray". Eric Brown thinks that the new Dynamic Management Views in SQL 2005 are a big step forward.… Read more

Most advice you see online about heaps is to avoid them. In this article, Uwe Ricken describes the basics of heaps so that you can determine when heaps are the best choice. … Read more