Siebel CRM Part 1: Should I Upgrade or Re-implement?

As of the most recent Forrester Wave Report for Customer Relationship Management applications, Oracle’s Siebel CRM is still quite a way ahead of its competition. This is despite the fact that around 2011-2012, Oracle invested heavily in the Fusion CRM stack, which unfortunately did not stand up well against the competition. In early 2013, Oracle restarted the development on the

As of the most recent Forrester Wave Report for Customer Relationship Management applications, Oracle’s Siebel CRM is still quite a way ahead of its competition. 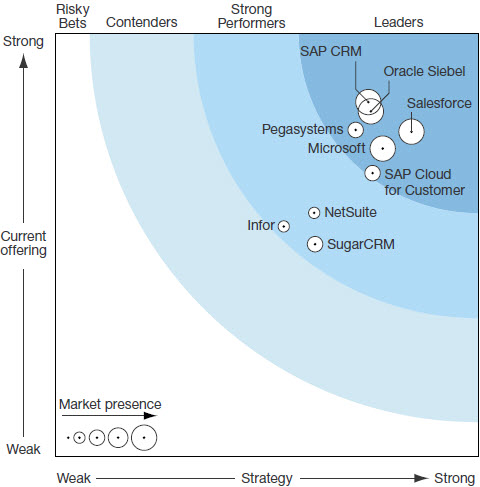 This is despite the fact that around 2011-2012, Oracle invested heavily in the Fusion CRM stack, which unfortunately did not stand up well against the competition. In early 2013, Oracle restarted the development on the Siebel application stack and has been consistently delivering enhancements to the application year on year as Innovation Packs. The key change has been the deployment of the Open UI architecture. This came out with the Siebel Version 8.1.1.9, or patchset 9, on top of Siebel version 8.1.1. The open UI architecture dramatically changed the user perception around the Siebel UI, since this effectively made Siebel browser independent, moving away from the previous dependence on Internet Explorer. The earlier dependence was primarily because the Siebel High interactivity client was heavily dependent on Active X controls. Over the last few years as Oracle launched the Innovation Packs (IP 2015 is the current one), this dependency has been done away with.

The new Innovation Packs are also adding in a lot of processes along with fixing bugs on the way. The biggest of the changes is that with IP 2015, Siebel tools, a thick client used for any kind of development, has now becoming Siebel composer, a web-based tool similar to most of the development clients for Cloud CRMs (this is still in a beta version in IP 2015 but is a step in the right direction). This will significantly reduce development and deployment times and will finally allow for zero downtime deployments as is common with most cloud applications.

Now the big question which comes to haunt the existing Siebel customers on why they should upgrade and how the upgrade process should be managed.

This article is primarily for the first set of Siebel customers.

Why should we upgrade to the new version?

Should we upgrade or re-implement?

The next key question to ask is whether the CRM installation should be upgraded as-is, or if should there be a reimplementation. The answer, however, is not that simple. Based on the previous section, let’s weigh the pros and cons of both.

In short, for the old Siebel customers, the best way forward is a reimplementation.

For the existing pre-Siebel 8.1.1.9 customers, the upgrade is fairly straightforward. For these customers the ideal way would be to undertake an in-place upgrade rather than a reimplementation.

This article is the first in a series of articles. The next few articles describe the actual upgrade process.

When you work for a small software development (or any services) company, one of the major challenges is to make sure that you expend your limited resources on opportunities that are economically sound. You may be approached by companies that have heard about you and think they might want to do business with you, but do these leads really represent opportunities? How much of your time should be spent finding out? Dwain Camps offers some guidance.… Read more

Traditionally Siebel CRM has been heavily dependent on ActiveX controls. Oracle offers lifetime support on any Siebel version post version 8.0 (launched in February 2007). As of Siebel 15 (Innovation Pack 2015), almost all of the Active X controls have been replaced by Java scripts as a part of the Open UI enablement. New customers deploying Siebel are truly browser-independent… … Read more

Using sequences when scaling up with Oracle RAC presents more issues with contention. In this article, Jonathan Lewis explains how to avoid the problems.… Read more