Most database developers are dealing with databases that contain external references. Even if the database code is in source control, these external references can make it very difficult to deploy to new environments. In these multi-database environments, tools like SQLCompare and SQL Change Automation do not automatically resolve object-order across databases, resulting in errors during deployment.

One way to tackle this, which works especially well for CI pipelines, is to create facades for all externally referenced databases. A facade in this context is a database with the expected name, with the expected objects, but those objects are hollowed out and do not contain any dependencies. You can compare this concept to an interface in an object-oriented language. Once you have these facades, they can be used in a pre-deployment step, simplifying the rest of the deployment by effectively removing object-order dependencies with these external databases.

This article shows you how to find all references to external objects in your database and build the necessary facade scripts.

There are three steps:

We’ll also touch on how to keep these scripts in sync without creating a maintenance nightmare.

The first step is to find all objects in other databases that your databases reference. To do so, use the following script. You will need to replace the list of databases (found in lines 7 through 9 below) with a list of all of your project’s databases.

While the example below lists multiple databases, in most cases, this list will contain only one (your) database. In other words, you don’t need to have a list of referenced databases; you need to provide only the name of the databases you are searching.

The result will be a list of all external database objects requiring a shell object to be created as part of the facade script.

For each external database, create a single facade script that contains all shell objects. Start by scripting out the objects as-is and place them into the file, separated by GOs. You will encounter four different object types: tables, stored procedures, views, and functions.

Tables can be left as is, but it is advisable to remove foreign key constraints:

Stored procedures require the body to be replaced with a single return statement, as in the following example:

For views, the facade needs to match the original in the following:

One way to take care of the return columns is to generate a SELECT statement that returns NULLs converted into the correct data types with the correct column names.

If you use Redgate SQLPrompt, this can be achieved easily by following these steps. 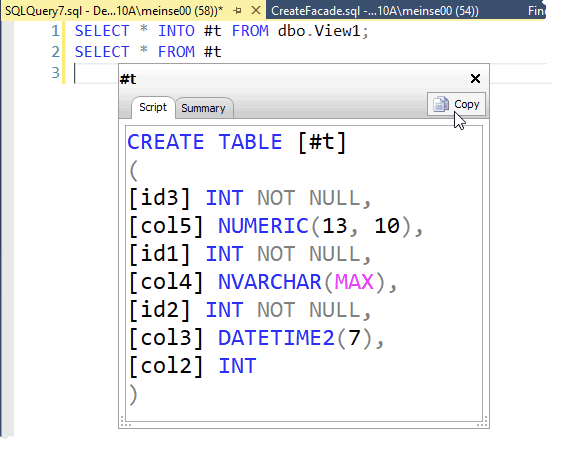 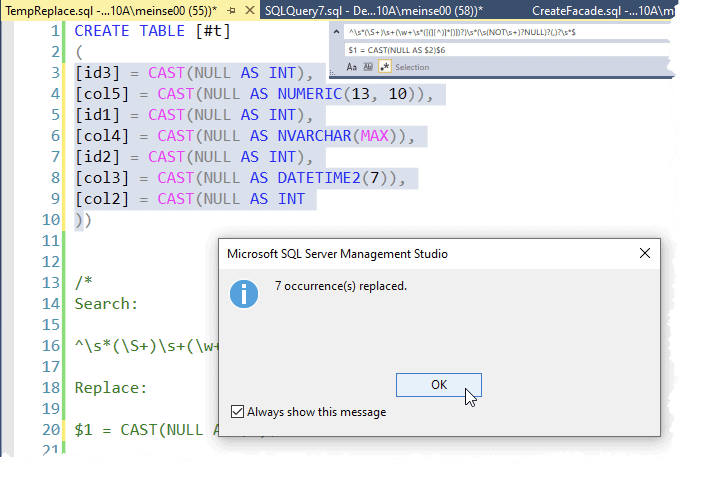 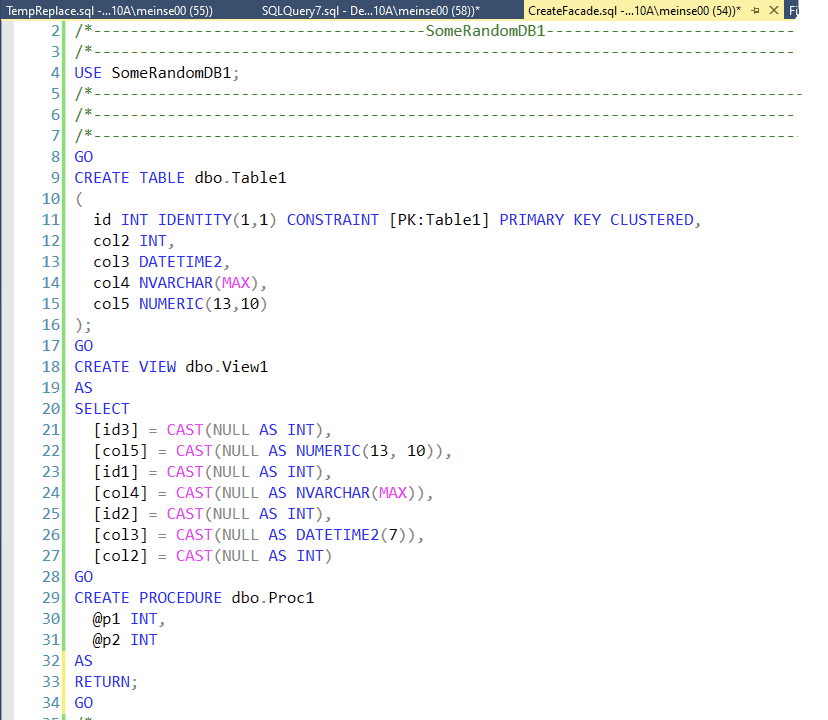 Similar to views, table-valued functions must match the original in the following:

The same process shown above for views can be used for table-valued functions. However, when dealing with a function, SQL Server requires that all parameters are specified. For these purposes, though, it is enough to use DEFAULT for each parameter. In the example below dbo.Function2 has one parameter specified: 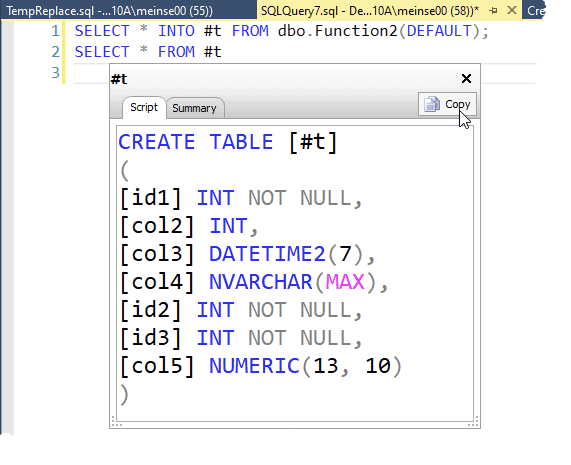 Note: Both multi-statement and inline table-valued functions can be replaced with an inline shell function like this: 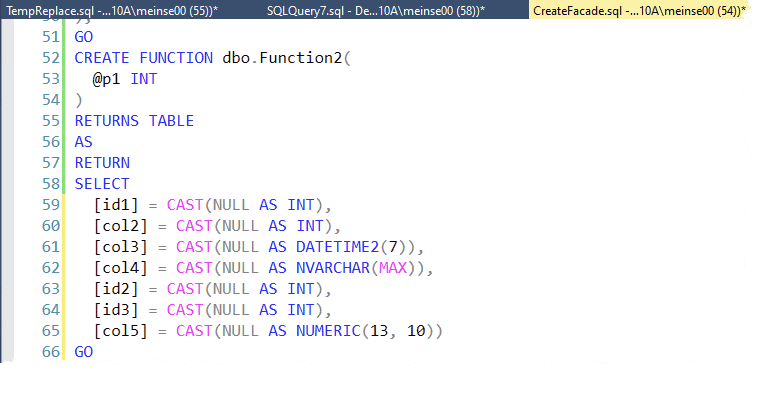 Should one of the objects be a scalar-valued function, you can just replace the body with a RETURN NULL as shown below.

In the end, your facade script for each external database should look something like this: 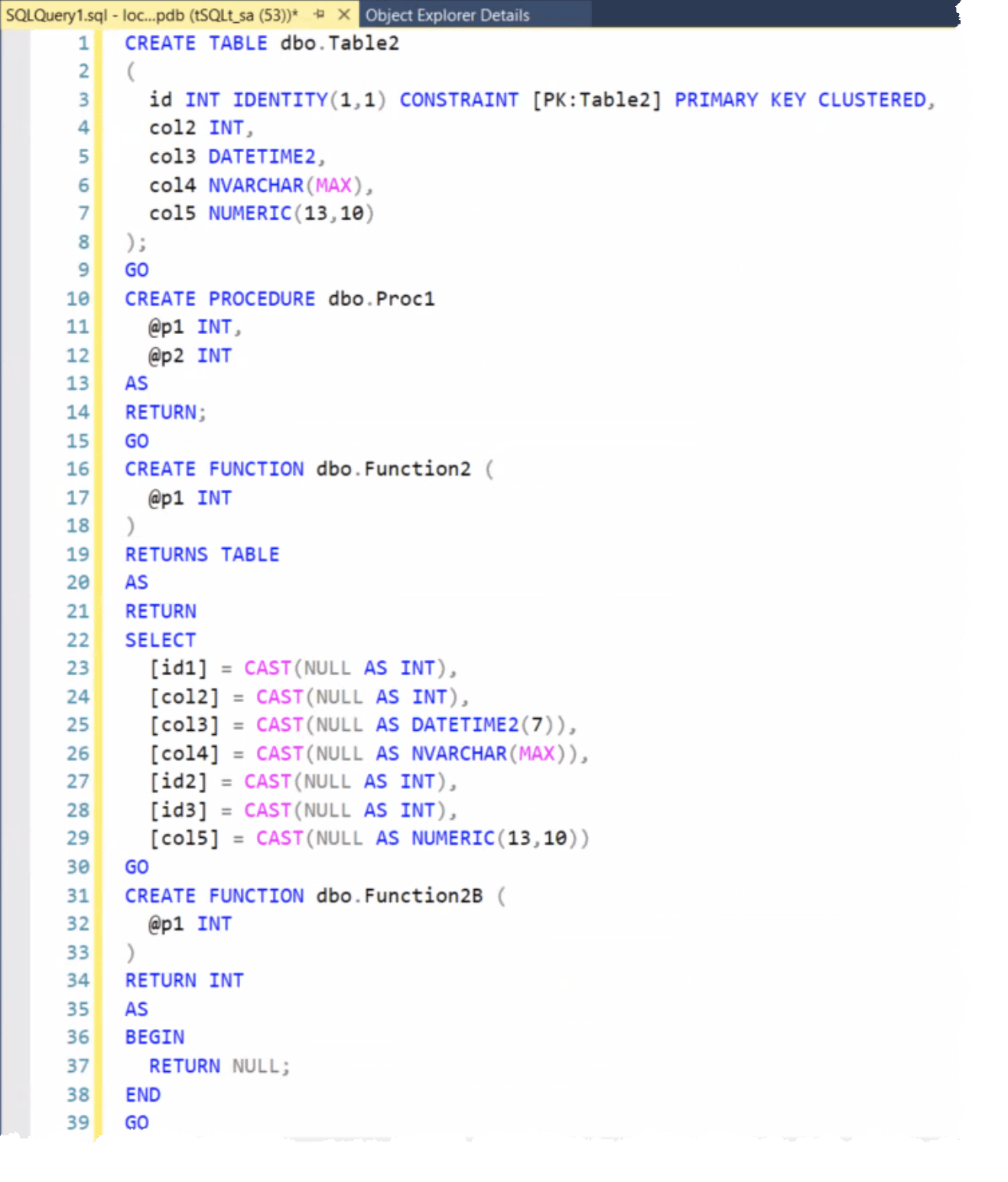 Once the facade scripts are complete, check them into source control alongside your database code to be kept in sync and always available.

Now when creating an environment from scratch, you will first create all the databases involved (without any objects). Then you will need to run the appropriate facade script in each external database to create all shell objects. Once you have done that, you will be able to create all actual objects in your database.

One way to achieve this is to execute the following steps in your pre-deployment:

After these pre-deployment steps are complete, you will be able to create all objects in your database using your tool of choice.

But what about maintenance?

These facade scripts are created manually and, as such, have to be maintained manually. This might feel like extra work. However, in our experience, this overhead tends to be minimal because the referenced databases do not dramatically change on short notice.

If you are using TDD (test-driven design), your facade will be naturally updated as part of your development activities. If you are not using TDD, your CI environment should still alert you to all necessary changes.

If you’ve followed the steps above, you’ll be able to deploy your database into a new environment or a CI environment with ease.

If you are writing tests (please write tests), you need to consider that the external objects are just a shell. Your tests cannot rely on the original implementation of these shell objects. However, this is a best practice to follow anyway, because writing tests that depend on code outside of your control can make your tests fragile and significantly increase the cost to maintain them.

Liz Baron has successfully introduced DevOps practices into Data Platform teams, leading efforts that resulted in a 90% reduction in defects. She is a partner at sqlity.net and an open-source advocate, serving as a maintainer of the tSQLt project.

View all articles by Liz Baron

0 5
More organisations are adopting DevOps, but what happens as the codebase grows? In this article, Siddharth Rao gives advice on how to implement continuous deployment at scale.… Read more
0 5