Previous articles in this series have focused on platforms like Azure Cognitive Services and Oracle Text features to perform the core tasks of Natural Language Processing (NLP) and Sentiment Analysis. These easy-to-use platforms allow users to quickly analyze their text data with easy-to-use pre-built models. Potential drawbacks of this approach include lack of flexibility to customize models, data locality & security concerns, subscription fees, and service availability of the cloud platform. Programming languages like Python and R are convenient when you need to build your models for Natural Language Processing and keep your code as well as data contained within your data centers. This article explains how to do sentiment analysis using Python.

Python is a versatile and modern general-purpose programming language that is powerful, fast, and easy to learn. Python runs on interpreters, making it compatible with multiple platforms, and is widely used in applications for web platforms, graphical interfaces, data science, and machine learning. Python is increasingly gaining popularity in data analysis and is one of the most widely used languages for data science. You can learn more about Python from the official Python Software Foundation website.

This article makes use of Anaconda open-source Individual Edition distribution for demos. It is one of the easiest ways for individual practitioners to work on data science and machine learning with Python. It comes with an easy-to-use interface, and the toolkit enables you to work with thousands of open-source packages and libraries. This section walks through the steps of setting up Anaconda and launching a jupyter notebook. 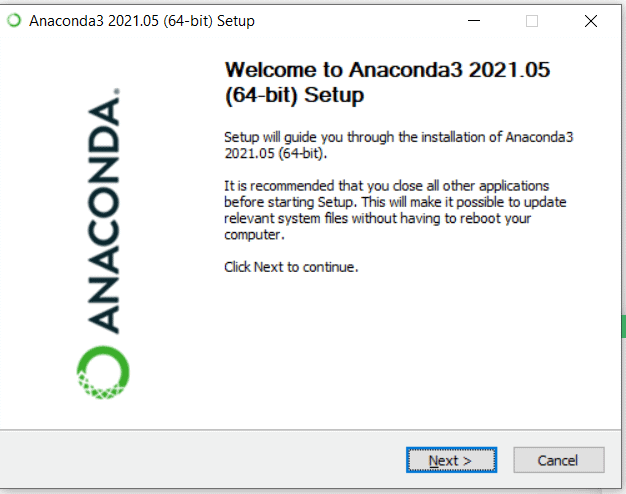 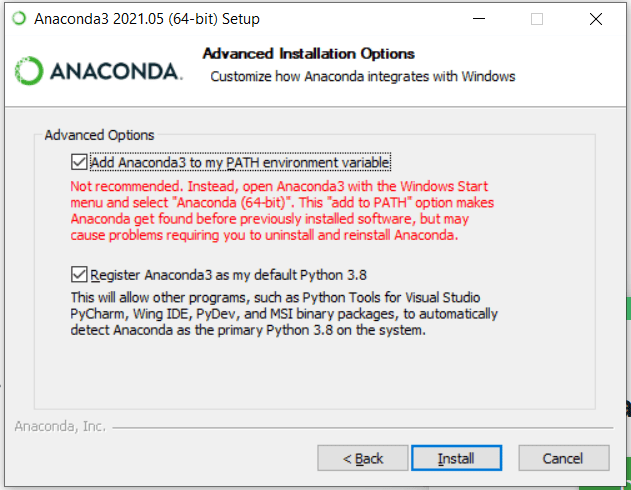 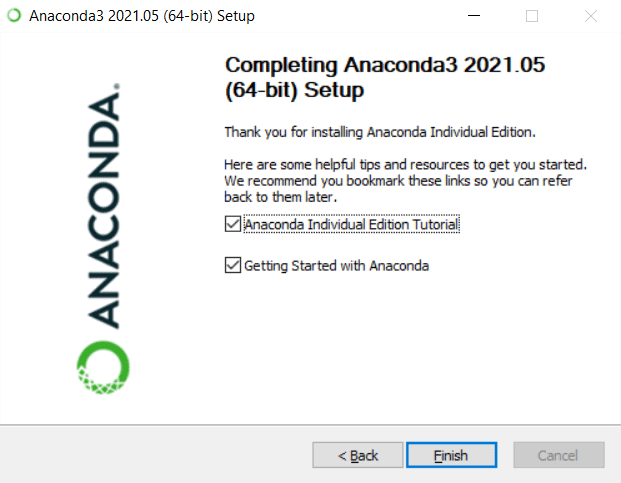 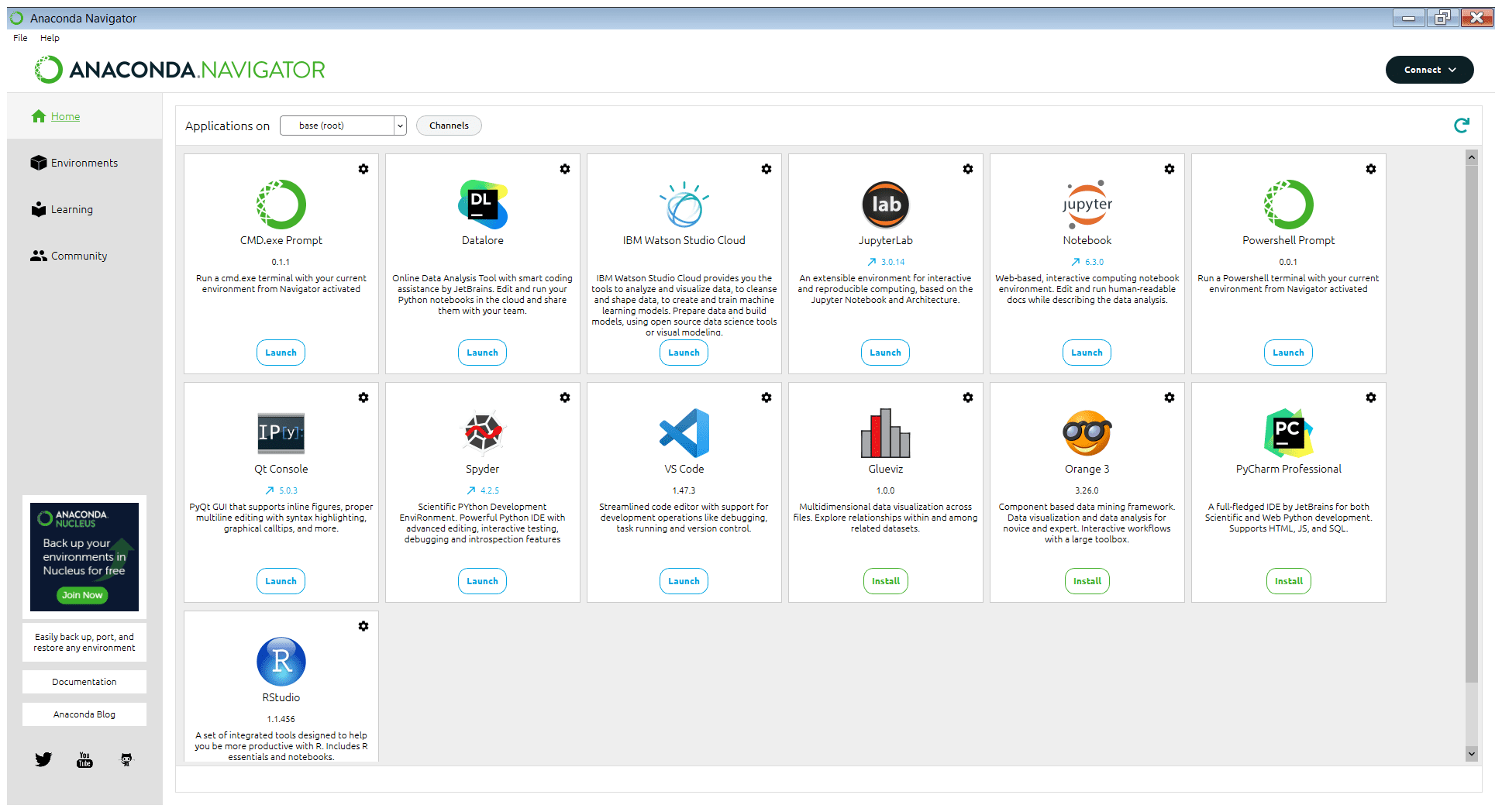 The Anaconda Navigator window presents you with several practical applications. Applications like Spyder and PyCharm are development environments for Python, VS Code is an extensible general-purpose code editor. Jupyter Notebook is an open-source web-based interactive computing notebook environment that allows users to create and share human-readable documents with live code, visualizations, and comments. JupyterLab is Jupyter’s next-generation notebook interface that is flexible and supports a wide range of workflows in data science, machine learning, and scientific computing. This article uses Jupyter Notebook for demos. 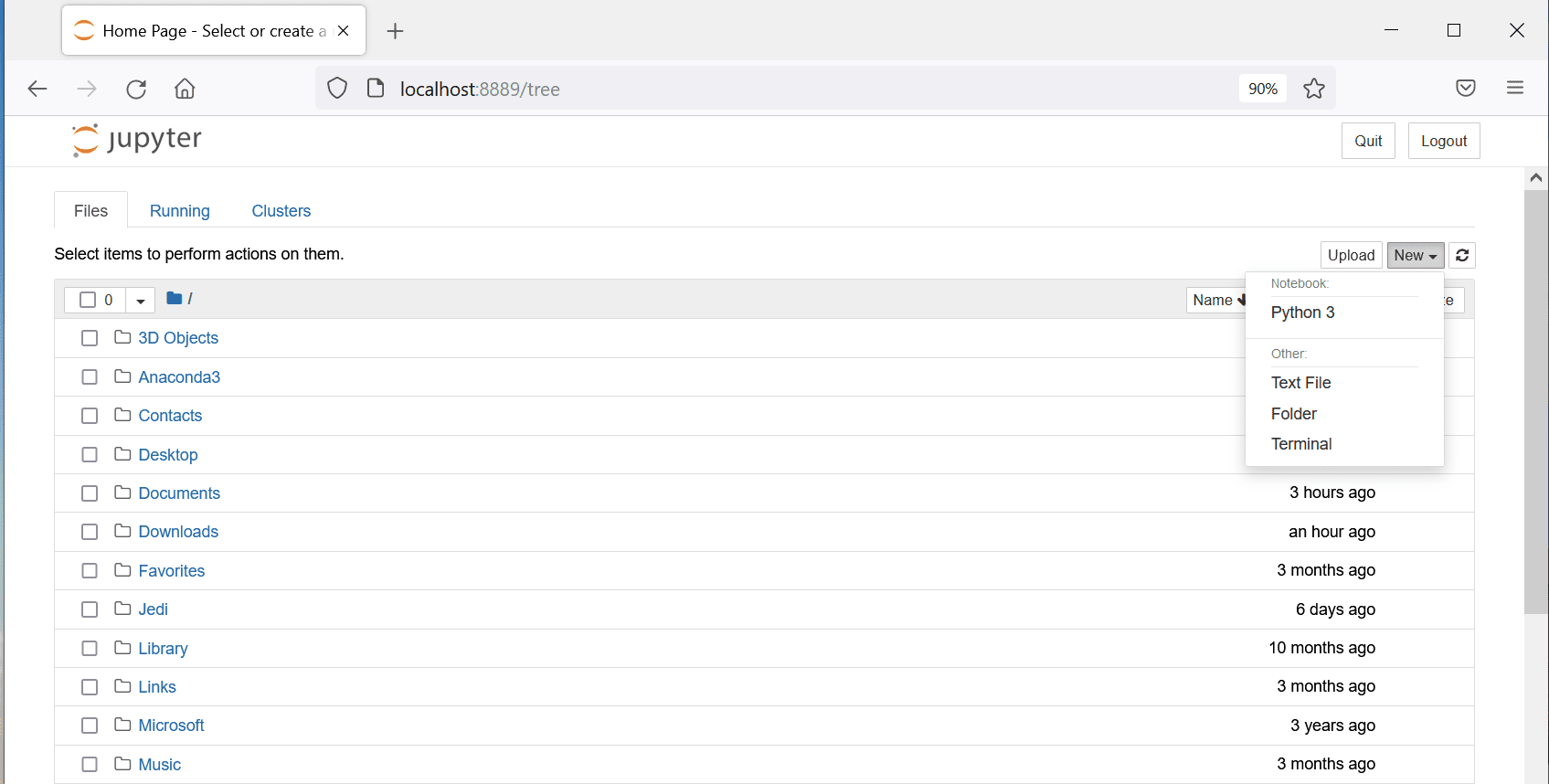 The Code snippet below will load the necessary modules and download the ‘vader_lexicon’ for sentiment analysis. This code also creates a short alias pd for referencing pandas and plt for referencing matplotlib modules later in the code. Copy this code snippet into the first cell of your new jupyter notebook and run it.

This step uses the read_excel method from pandas to load the demo input datafile into a panda dataframe.

Add a new field row_id to this dataframe by incrementing the in-built index field. This row_id field serves as the unique key for this dataset to uniquely identify a row and will be used later in the code for merging two dataframes.

The code snippet below performs these two tasks and prints the top ten rows of the resulting dataframe. Copy this code snippet into the next cell of your jupyter notebook and run that cell. 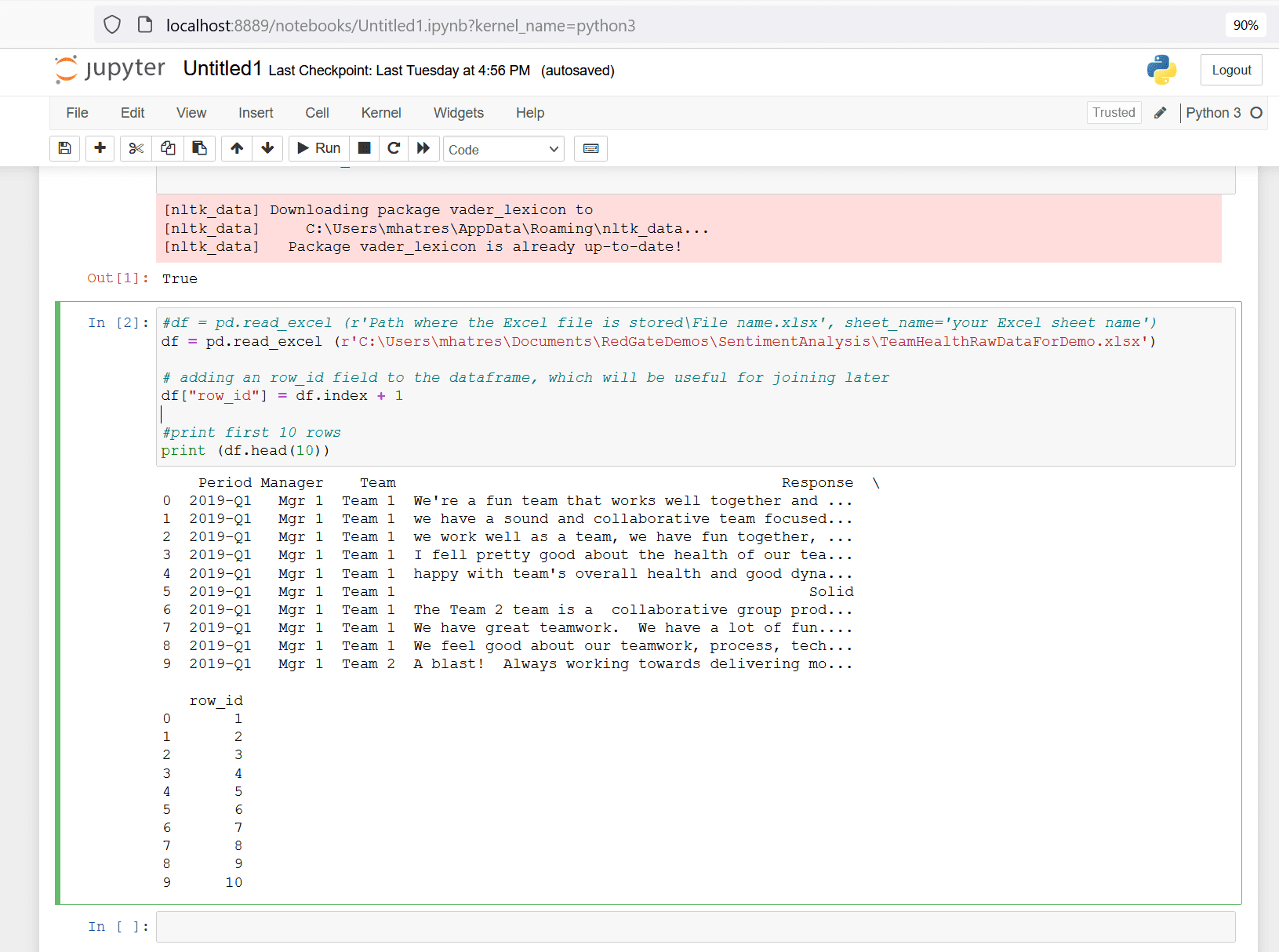 The next step will subset row_id and Response fields into a new dataframe, which is the input format required for by the SentimentIntensityAnalyzer class. This step also cleans up the text data by removing all non-alphabet characters and converting all text to lower case.

The code snippet below performs these two tasks and prints the top ten rows of the resulting dataframe. Copy this code snippet into the next cell of your jupyter notebook and run that cell. 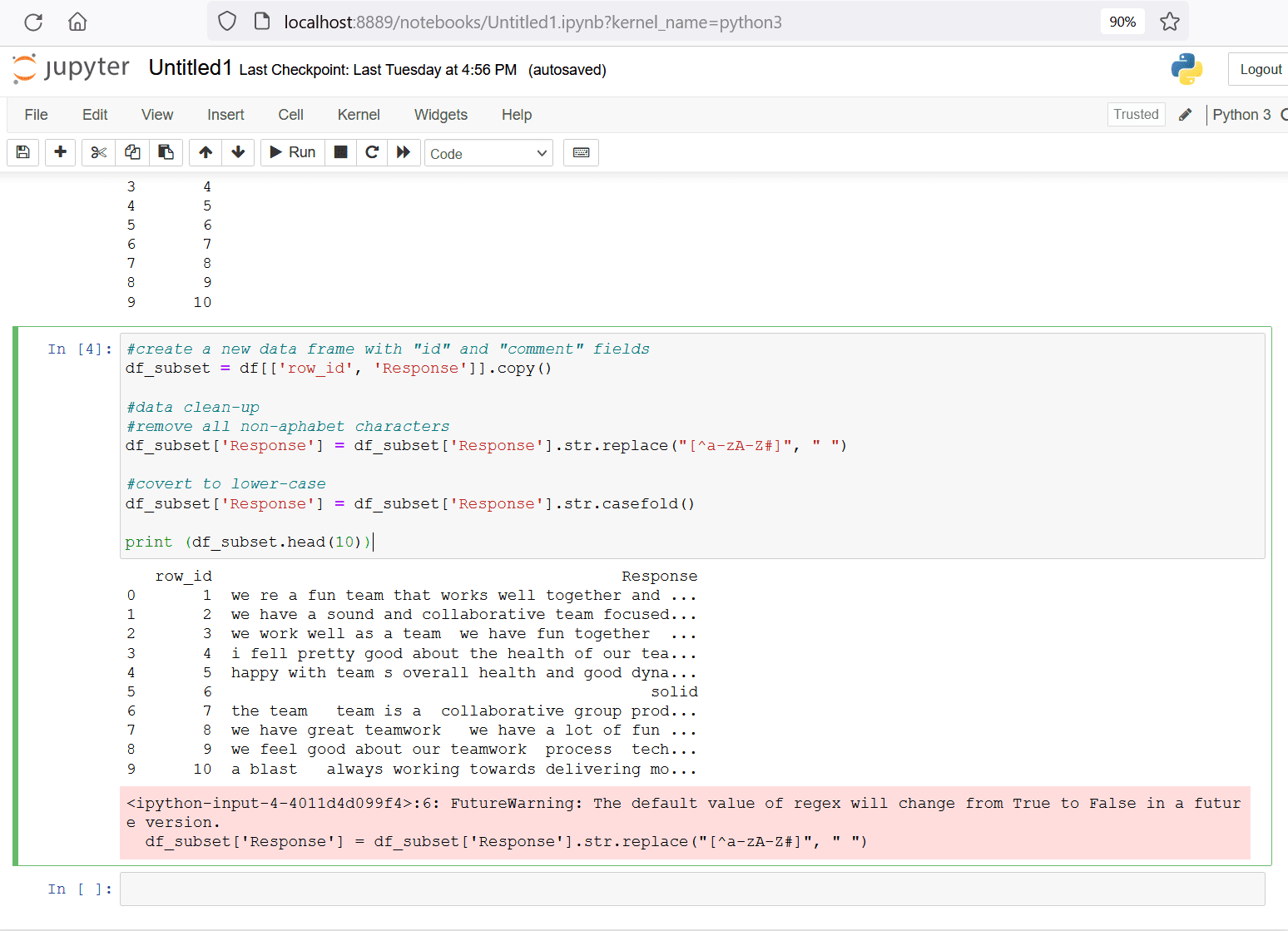 The SentimentIntensityAnalyzer class uses the Valence Aware Dictionary and sEntiment Reasoner (VADER) in NLTK. The sentiment lexicon in VADER is a list of lexical features like words and phrases labeled as positive or negative according to their semantic orientation. Its rule-based approach is especially good at detecting sentiments in common applications like social media posts, product or service reviews, and survey responses.

VADER also generates a numeric score in the range of negative one (-1) to positive one (+1) to indicate the intensity of how negative or positive the sentiment is. This is called the polarity score and is implemented by the polarity_score method of the SentimentIntensityAnalyzer class.

Run the following code snippet in next cell of your jupyter notebook to create a dataframe for staging the output of the SentimentIntensityAnalyzer.polarity_scores method.

The next few steps involve instantiating an object of the class SentimentIntensityAnalyzer and running a for-loop to iterate the polarity_scores method over each row of input text dataframe df_subset. Another for loop is embedded with the earlier loop to write the sentiment polarity score for each sentiment type to an intermediate dataframe. The three sentiment type values are.

At the end of the for loop, clean the output dataframe by:

The code snippet below performs these tasks and prints the top ten rows of the resulting dataframe. Copy this code snippet into the next cell of your jupyter notebook and run that cell. Depending on the size of your input dataset and machine resources, this step may need a few minutes to complete. 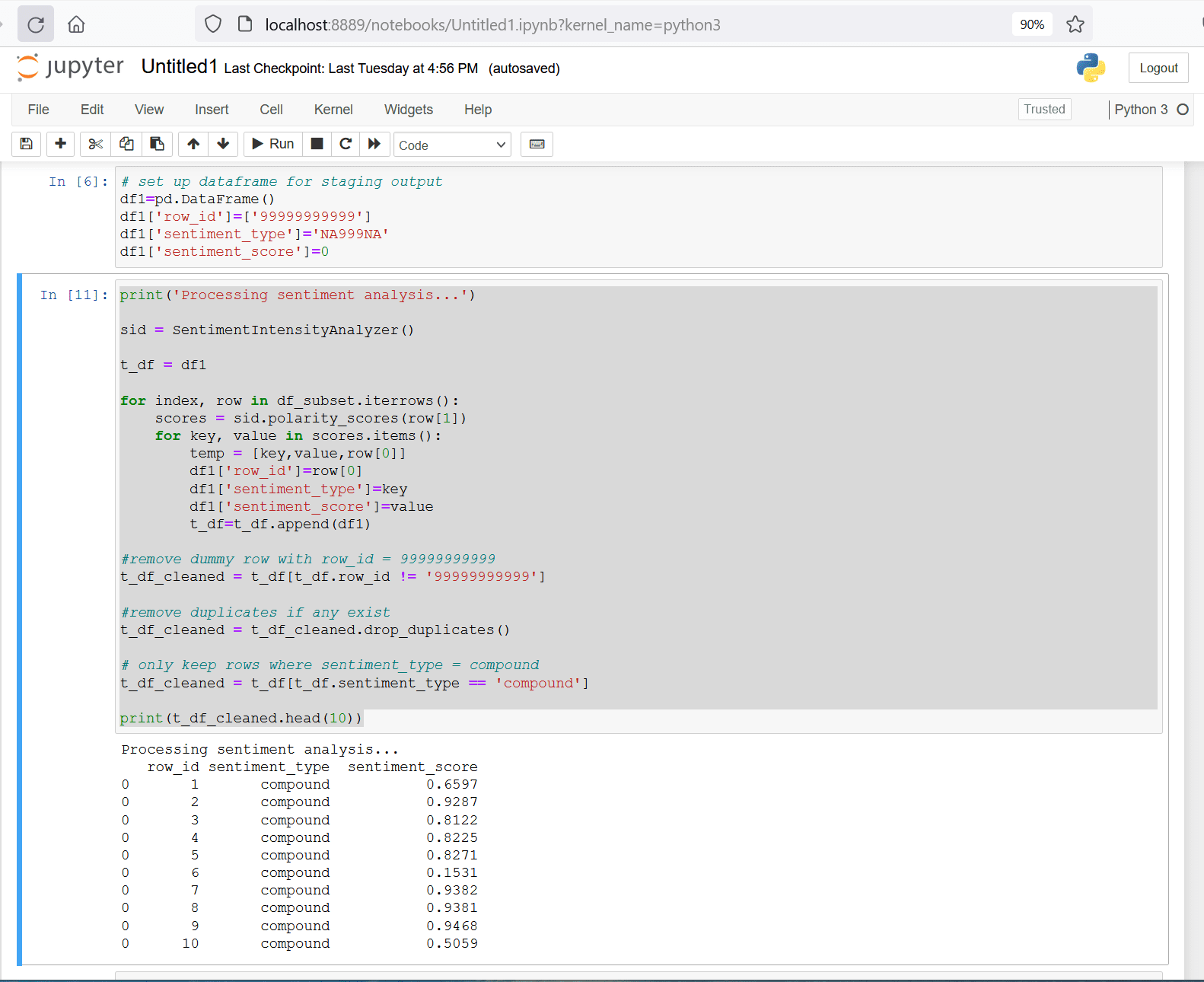 Merge this output dataframe t_df_cleaned with the input dataframe df using the field row_id. This dataframe merge operation in Python is conceptually similar to performing a join on two database tables in SQL. The merged dataframe will have the following fields and one row per survey response.

The code snippet below performs this merge operation and prints the top ten rows of the resulting dataframe. Copy this code snippet into the next cell of your jupyter notebook and run that cell. 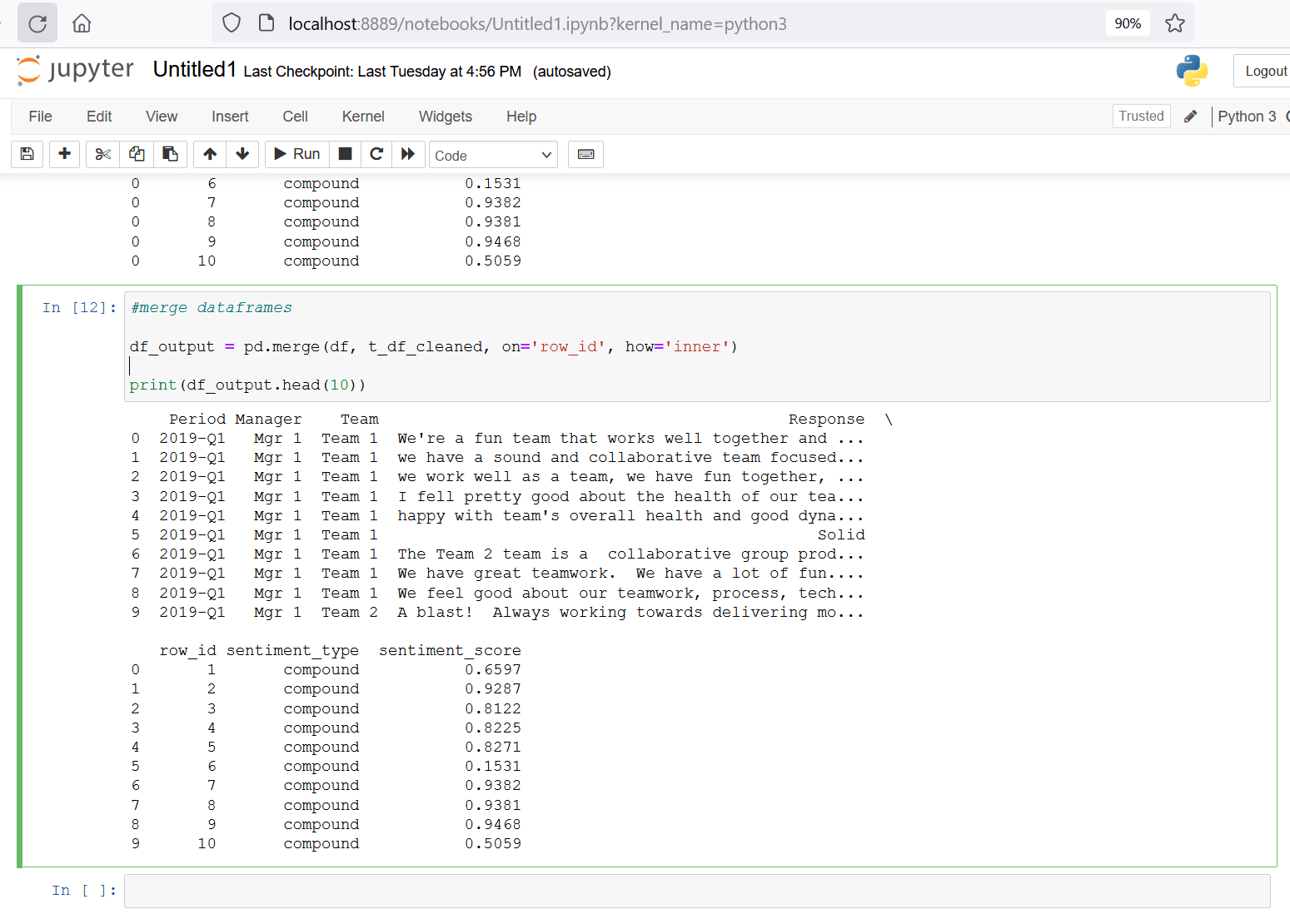 Follow this link to learn more about the merge operation in pandas.

This section will demonstrate how to analyze, visualize, and interpret the sentiment scores generated by the previous steps.

Use the describe method in pandas to generate summary statics of values in the Sentiment_score field. These summary statistics reveal the numerical insights of this dataset using aggregate metrics like count, min, max, median, etc.

The code snippet below generates summary statistics of sentiment_score field of df_output dataframe. 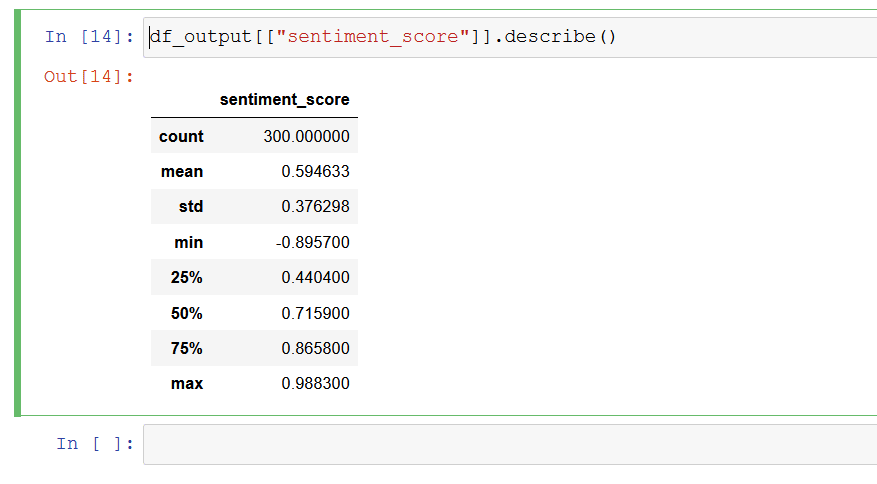 A quick review of these summary statistics reveals the following insights.

The next step uses matplotlib to create various charts to analyze the sentiment scores by the available attributes of Period, Team, and Manager. 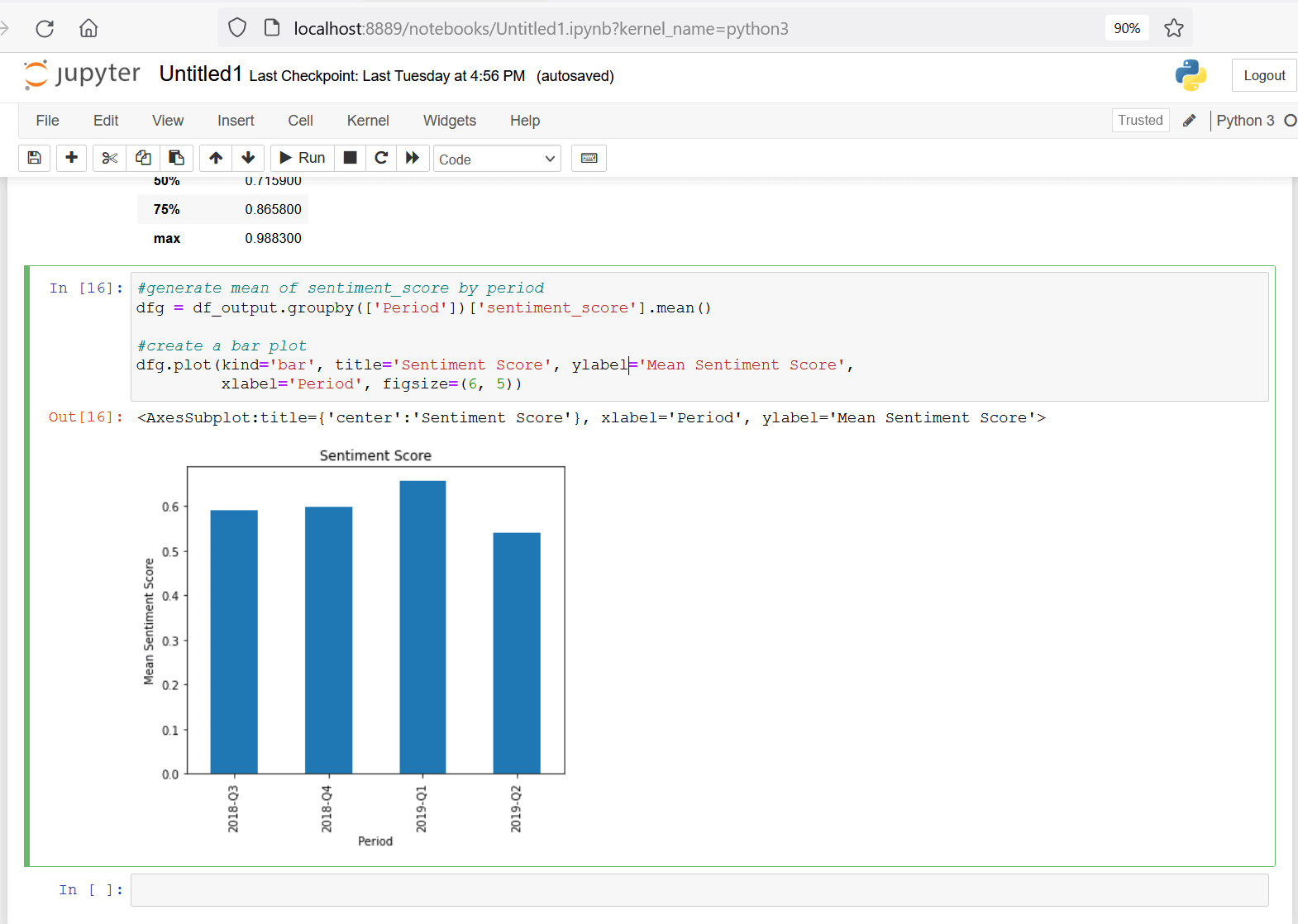 This bar plot shows the mean sentiment score across all teams

This decrease in the last quarter could indicate some employees felt less positive about their team’s health in that quarter. While a decrease in one quarter is certainly not alarming, it could be a Key Performance Indicator (KPI) for managers to watch in future quarters, in case the downward trend continues and needs further investigation. 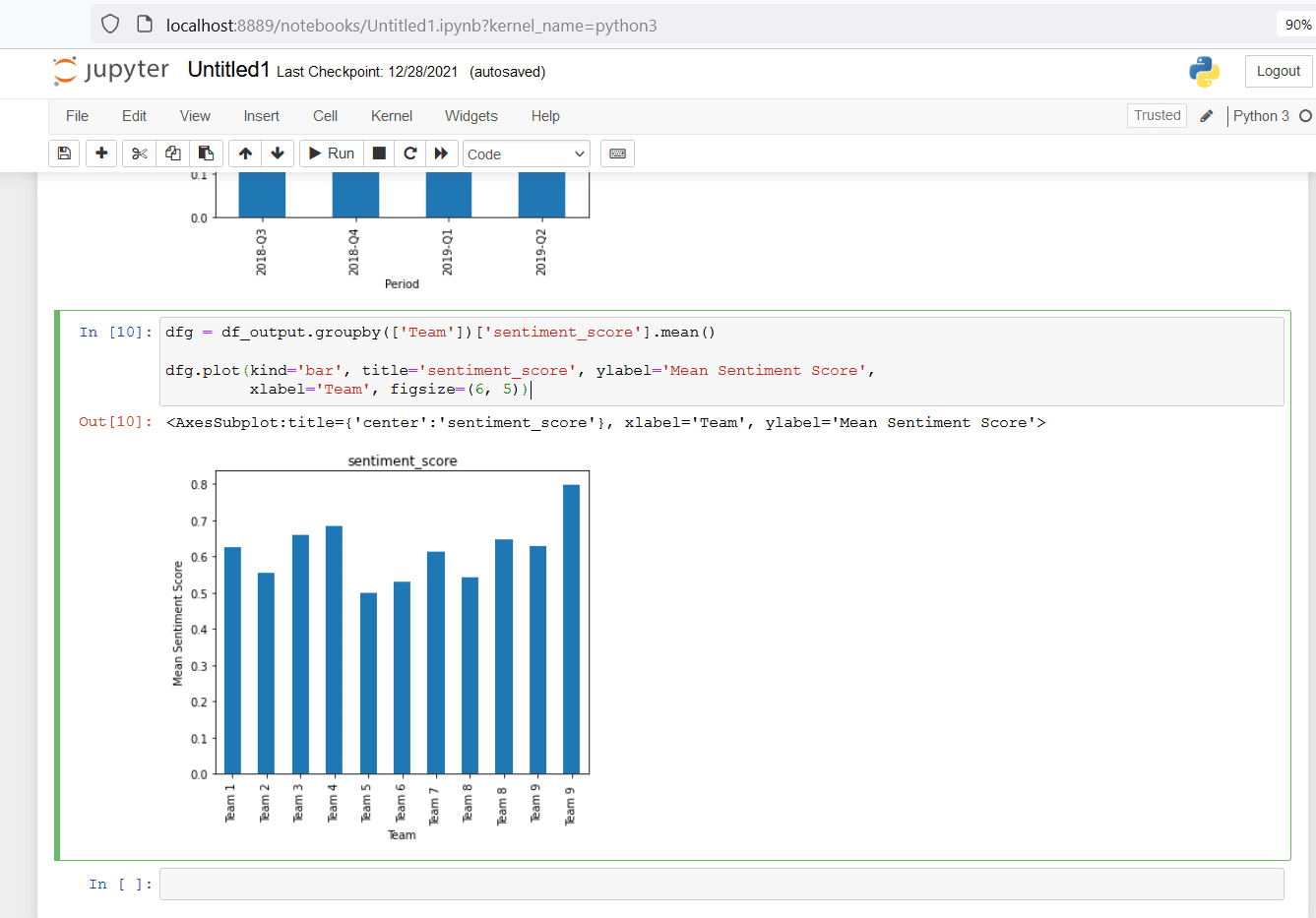 While the previous two bar charts help uncover interesting insights using the mean sentiment score, averages can sometimes hide nuances in the data. For example, figure 15 shows Team 5 has an average sentiment score of 0.5, which can be interpreted as “neutral”. Is it in the “neutral” range because all team members feel neutral about their team’s health, and there is consensus within this team? Or is it neutral because about half of the team feel strongly positive about their team’s health, and the other half feel strongly negative and the approach of using averages is masking this polarization within the team?

A boxplot, also known as a box and whiskers plot is a great way to learn such insights by studying the center and spread of numerical data. A box plot is a method of graphically depicting groups of numerical data through their quartiles. Box plots may also have lines extending from the boxes (whiskers), indicating variability outside the upper and lower quartiles, hence the terms box-and-whisker plot. It is commonly used in descriptive statistics and is an efficient way of visually displaying data distribution through their quartiles. They take up less space and are very useful when comparing data distribution between groups.

This section uses seaborn to create the boxplot. Seaborn is a popular statistical data visualization library in Python. It’s based on matplotlib and provides easy to use high-level interfaces for creating engaging and information statistical charts. Seaborn is pre-installed in the Anaconda environment used in this demo and available to simply import into the jupyter notebook.

The following code snippet imports the seaborn library and creates the boxplot with these parameters.

Copy this code snippet into the next cell of your jupyter notebook and run that cell. 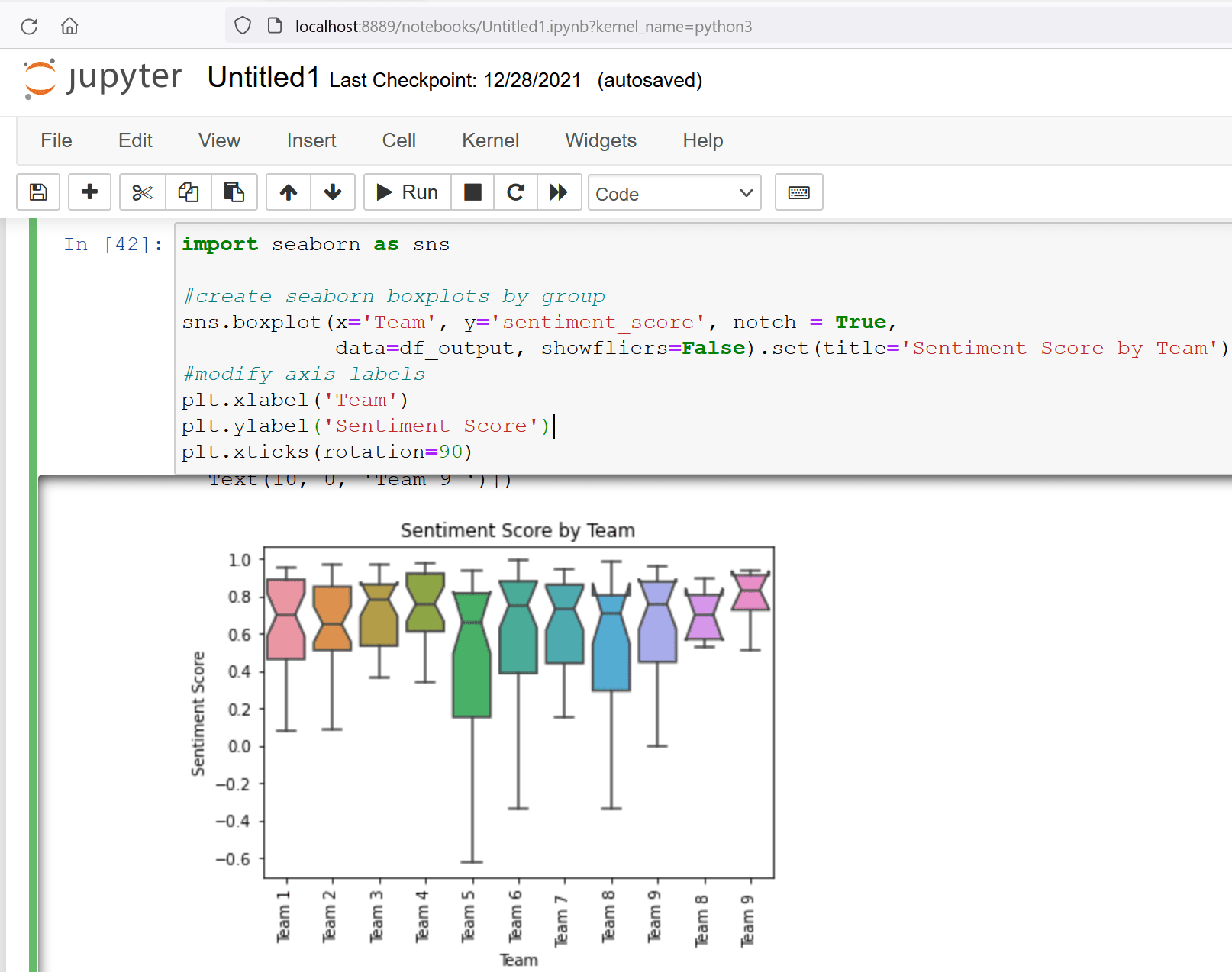 This boxplot reveals interesting insights about how members within each team feel about their team’s health.

Sanil Mhatre is a Senior Data Engineer, currently focused on delivering Analytical insights for a large Technology solutions & Services company in Missouri. He has a Master's degree in Information systems and enjoys working with various Data processing technologies, analytics tools and visualization platforms. Sanil has an interest in Data Science, is an active member of PASS and a frequent speaker at technical conferences and user groups. He volunteers with STEM mentorship programs, blogs and loves to keep up with developments in the fields of Machine Learning & AI. When Sanil isn't working he enjoys spending time with family and friends, tasting craft beer and hiking with his dogs.

View all articles by Sanil Mhatre

0 8
You can find memory leaks in Python code with tracemalloc. In this article, Priyanka Nawalramka demonstrates how to use tracemalloc to find the leaks.… Read more
0 8