What are Inline Indexes?

New releases of SQL Server arrive at a quick pace, and it's difficult to keep up with the many features introduced in each version. In this article, Phil Factor reviews a feature you may have missed, inline indexes. He covers the syntax and the many ways they can be used and then performs some performance tests to see if they can make a difference with table variables.

Usually, the added features of the CREATE TABLE syntax in new releases of SQL Server are esoteric, and unless you are dealing with memory-optimized tables or other esoteric stuff, they aren’t of great interest. However, the Inline INDEX for both a table and column index has just crept in quietly with SQL Server 2014 (12.x). This was interesting because the SQL Server team back-fitted it to all tables rather than just in-memory OLTP tables for which it was, at the time, found necessary. The new syntax was introduced which allows you to create certain index types inline with the table definition. These could be at column level, concerning just that column, or at the table level, with indexes containing several columns.

Why interesting? This affects multi-statement table functions, user-defined table types, table-valued parameters as well as table variables. It was considered a game-change for table variables because, for a start, it allowed non-unique indexes or explicit clustered indexes to be declared on columns for the first time because you can create indexes on table variables as part of the table definition. Of more significance were the table-level indexes that allowed you to specify multi-column indexes. Previous releases had allowed multi-column primary or unique constraints, but not explicitly named indexes. You still cannot declare an index after the table is created, which is a shame as there are good reasons for being able to do so after a table is stocked with data. Any sort of large import of data into a table that is over-indexed or prematurely-indexed is doomed to crawl rather than to run. I’ll show this later on in this article.

The SQL Server 2014 improvements introduced named indexes for table variables for the first time. I haven’t yet worked out a practical use for explicitly naming such indexes in such ephemeral objects.

The bad news is that no distribution statistics are kept on table variables, so the indexes you create don’t have them either. In some cases, even when using this new syntax, performance isn’t always as effective as using temporary tables, which provide statistics. The most satisfactory workaround is to is to add OPTION (RECOMPILE) to the query referencing the table variable, forcing the optimizer to take the cardinality of the table variable into account after it has been populated. SQL Server 2019 and SQL Azure introduces ‘Table variable deferred compilation’ that obviates the need for the use of the OPTION (RECOMPILE) by using cardinality estimates that are based on actual table variable row counts in order to produce better query plans when compiling queries.

Here are the two syntax diagrams for inline indexes. I’ve corrected them slightly from the MSDN original.

Note: Hash indexes are permitted only in memory optimized tables. You can’t specify UNIQUE as well as (NON)CLUSTERED.

For table variables and their variants, we have the new table index. In fact, the UNIQUE attribute is also allowed on the index, but I’ve kept to the published version because although the UNIQUE keyword is accepted, I’m not certain whether it is implemented.

And finally, the new table index for tables is rather more complex due to its specialized uses!

Even if you entirely eschew the useful table variables, multi-statement table functions, UDDTs and TVPs, this is going to save you quite a lot of typing for things like temporary tables.

So, let’s stand back and look at the syntax for table variables (and with a slight difference, UDDTs). 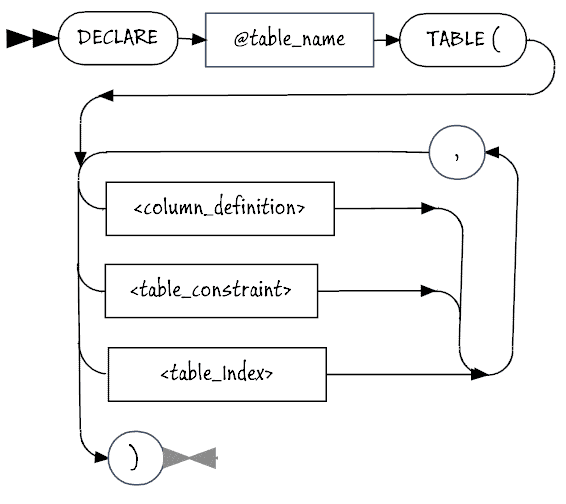 The table type declaration is similar. Instead of Declare @table_name TABLE (, it is CREATE TYPE MyType AS TABLE (.

From this distance, it all looks simple. Perhaps it is time to look closer. 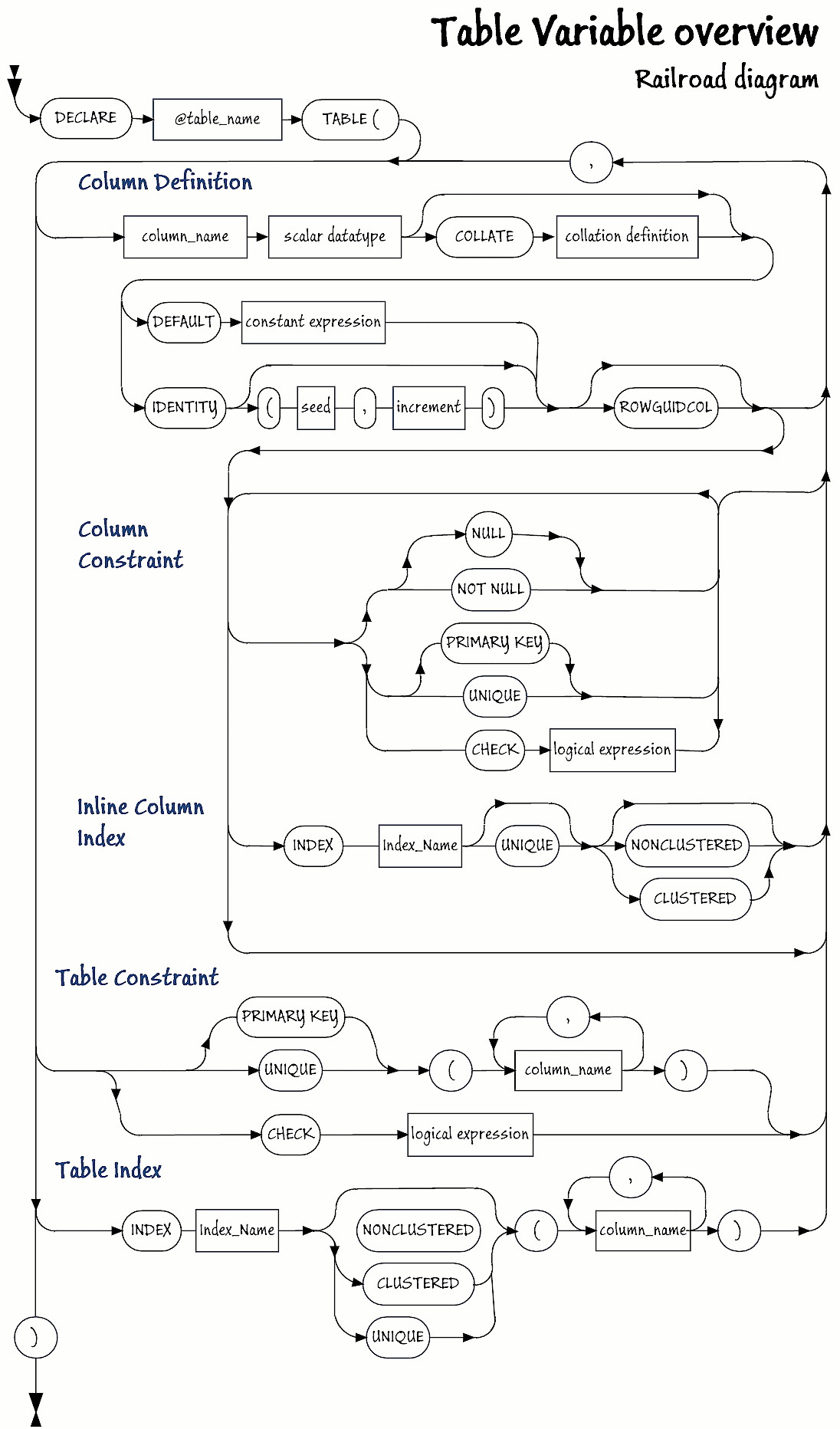 If you would like a better copy of this to print out, here is a PDF.

A multi-statement table function with a clustered index

Testing Out the Indexes

We’ll demonstrate the effect of an index on a table variable. We will create two table variables, one with an index and one without. We’ll then see how long each took to import four million rows of data. For the data to load, run this script to create the table. I suggest using Redgate’s SQL Data Generator to populate it with four millions rows, but you can use any method you wish. You can also use this script to create a smaller table.

Once you have the Directory table in place, run this code to see how long it takes to populate the table variable with and without indexes:

Yes, the old-fashioned table variable still took less than a tenth of the time to insert those rows! There is definitely a problem in stocking a table with a significant amount of data when you’ve placed all those indexes in it.

We run another test, this time doing a search for organisation names, and just timing that, ignoring the interminable wait to stock the table. I’ve also included an INSERT statement to make sure that the rows we are searching for exist in the Directory table.

So yes. The unindexed table variable had to do a table scan whereas the indexed table gave the query optimiser the chance to use that ‘NameIndex‘ column index. It was too quick for me to measure it. So, it looks like a tradeoff, but with just a small amount of searching our unindexed table wins hands down.

Were we still being unfair? Hell yes.

That was a simple search. All we actually need is a clustered index for the organisation name. We’ve also added a second index for postcodes that we never used in the test. So, instead of trying to make these two tables equivalent, we optimise them and run the test again. In one case we search using a clustered index, and in the other one we use a non-clustered index.

By creating a clustered index on the organisation name we’ve not only kept the @OrganisationNameClustered table to just double the load time for the four million rows when no indexes except the primary key are included, but now the search for organisations is blindingly fast. We have the best of both worlds.

The new indexes could, with care, make a great difference to Table Variables. However, this depends on coming up with a good strategy for the design of the table variable. It pays to do performance testing on the batch that uses the table variable because the best strategy to choose is so dependent on the details of what the batch is doing. Some problems are obvious: Don’t scatter lots of indexes about just because you can. They come at a performance cost which can be far higher than the benefits. Get it right and suddenly table variables are going to be working blindingly fast.

Will we see an advantage too when using multi-statement table-valued functions, user-defined table types and table-valued parameters? My own experiments with functions aren’t conclusive, but so far in my experiments, the costs of creating the index before filling the table outweigh the subsequent gains from the index.