User-Defined Functions (UDFs) are an essential part of the database developers' armoury. They are extraordinarily versatile, but just because you can even use scalar UDFs in WHERE clauses, computed columns and check constraints doesn't mean that you should. Multi-statement UDFs come at a cost and it is good to understand all the restrictions and potential drawbacks. Phil Factor gives an overview of User-defined functions: their virtues, vices and their syntax.

User-Defined Functions are an essential part of T-SQL. They aren’t, however, quite like functions in a procedural language, or even the built-in system functions such as GetDate(). It is tempting to use them to write SQL code that conforms to good procedural practice in maintaining a single responsibility. Certainly, inline table-valued functions can be used guilt-free where you’d want to use a parameterized view, but you can’t say the same of any type of multi-statement function, whether it produces a scalar value or a table. These, which are characterised by their BEGIN….END block, need to be used with caution. When misused, multi-statement functions can cause a lot of performance problems. It is, however, a mistake to condemn them altogether, because they are, in some cases, essential. There are plenty of places in any database solution where multi-statement functions are by far the best solution to a problem, despite their restrictions, cautions and performance problems. They just take more care and consideration.

In this article, we won’t discuss CLR functions. They are a different topic.

How Functions are executed 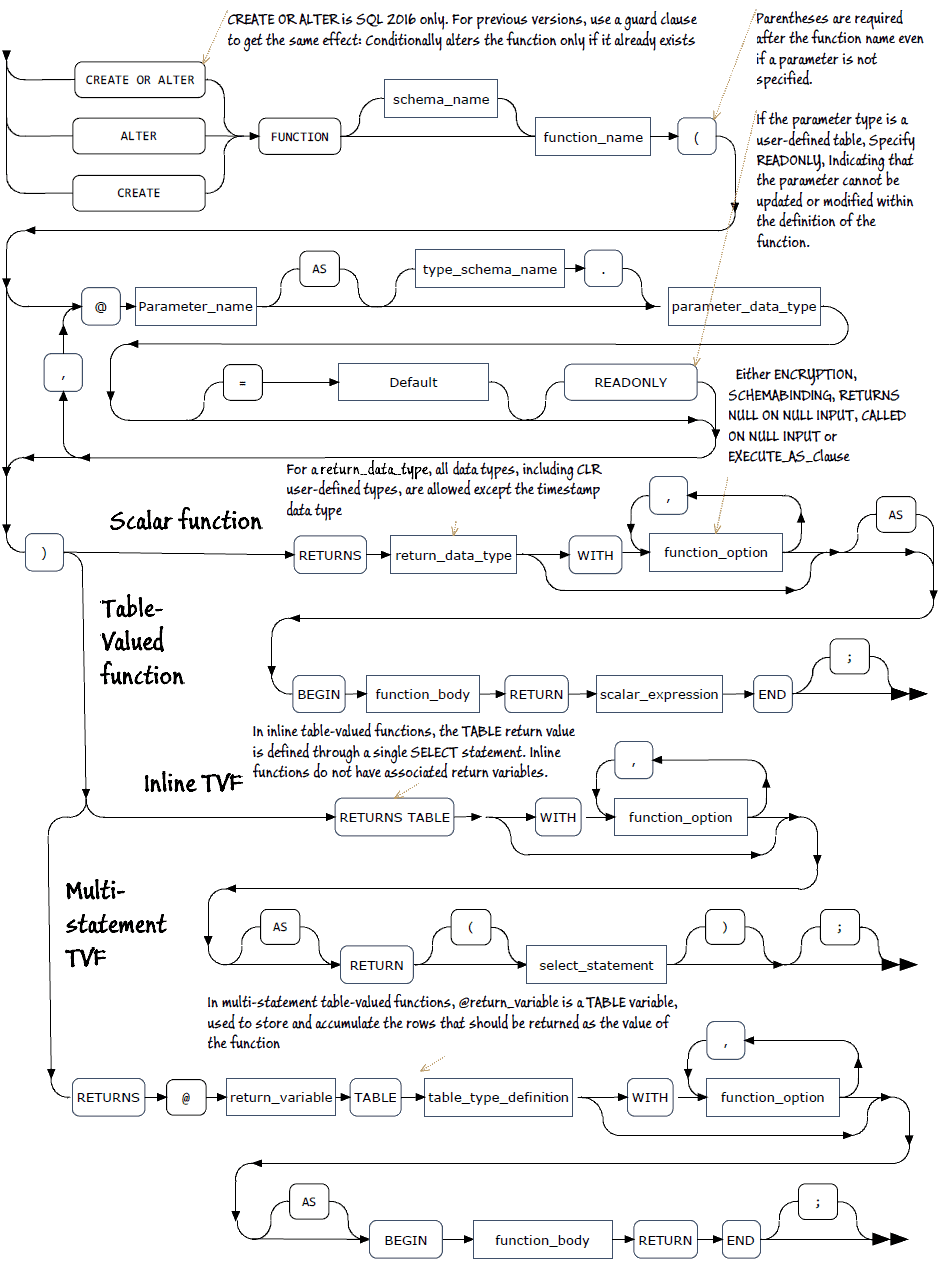 The different types of function

You’ll have noticed from the syntax diagram that there are three different types of Function.

As you can see from this, Table Functions can be Inline or Multi-statement. Inline functions do not have associated return variables, they just return a value functions. Multi-statement functions have a function body that is defined in a BEGIN…END block, consisting of a series of Transact-SQL statements that together do not produce a side effect such as modifying a table.

Although Microsoft mentions in ‘types of function’ that ‘For an inline scalar function, there is no function body; the scalar value is the result of a single statement.’ – In fact, inline scalar functions aren’t yet implemented in SQL Server, only multi-statement inline functions, which are, sadly, slow when compared with system functions.

A skeletal, minimal version of these three types would look something like these three snippets/examples.

Only the following statements are allowed within multi-statement functions

Things that can be done with functions but are to be avoided where possible.

Function names must, of course, comply with the general rules for identifiers and must be unique within its schema. If you use a function conventionally, you must use the dot convention to specify the schema name, and the database if necessary.

Scalar-valued functions can be executed by using the EXECUTE statement. If you EXECUTE a function rather than use it in a SELECT statement or constraint, you can leave out the schema name in the function name, and it will look in the dbo schema followed by the users default schema. Here is an example of a scalar function being called via the EXECUTE syntax and the conventional way.

This other EXECUTE syntax is odd: more like a procedure. However, it has uses, as I’ll show later on.

Parameters can take the place only of constants; they cannot be used instead of table names, column names, or the names of other database objects. The values supplied to parameters cannot be expressions, only literals (e.g. 1546) or local variables (e.g. @TheResult).When you pass parameter values to a user-defined function that are too large (e.g. a Char(8) value to a CHAR(4) parameter, the data is truncated to the defined size without any error or warning.

All scalar data types except the timestamp is allowed for a parameter. . The non-scalar types, cursor and table, aren’t allowed, though a Table-Valued Parameter is. If you don’t specify the schema for a user-defined data type, the Database Engine looks in the default schema of the user followed by the dbo schema.

When you have a default value assigned to a parameter, you can use it instead of a supplied value. In the first example above, I used a default value of NULL to tell the routine that if no value was specified, today’s date was to be used to calculate the week. Unfortunately, in the normal syntax, you have to specify that you are allowing the default to be used by providing the DEFAULT keyword. The EXECUTE syntax to call functions allow you more latitude. You need not provide values or the DEFAULT keyword. This can be useful, as in this little sample function that creates a list of up to ten strings. It works because, you can leave out parameters that have a default value assigned to them

You can, of course, use this to create tables from lists but you can’t use the EXECUTE function. This means that your lists have to be marked with an explicit DEFAULT when you go beyond the end of the list.

User-Defined Table Types can be used as parameter in functions. If so, they should be marked as READONLY, indicating that the parameter cannot be updated or modified within the definition of the function. They can be used to define variables that are used within a function, but as they are not scalar variable, they cannot be returned by scalar functions! You can return XML types from inline functions, thereby allowing hierarchies to be represented in XML.

You can use a table-valued function as a ‘table source’ in a FROM clause of SELECT, INSERT, UPDATE, or DELETE statements, but if you use a multi-statement function, this can perform badly in joins due mainly to the poor execution plan.

You can, of course find out quickly the name of your user-defined functions and their categories.

There are a number of objectproperties that are useful

Some of these properties are function options, specified with the WITH clause. These are:

Unless you have a good reason otherwise, use the SchemaBinding function option, It specifies that the function is bound to the database objects that it references. When SCHEMABINDING is specified, the base objects cannot be modified in a way that would affect the function definition.

Specifies the security context under which the user-defined function is executed. Therefore, you can control which user account SQL Server uses to validate permissions on any database objects that are referenced by the function.

This applies only to scalar-valued functions it specifies the OnNULLCall attribute. If not specified, CALLED ON NULL INPUT is implied by default, meaning that the function body executes even if NULL is passed as an argument.

Indicates that the Database Engine will convert the original text of the CREATE FUNCTION statement to an obfuscated format. It isn’t used nowadays, and there just for backward compatibility

It is often useful to find out what is using a function, especially if the function is lurking in a trigger or a particularly if it is a slow multi-statement function. Here is some SQL, as an example, that tells you where your multi-statement table value functions are used, and what they, in turn, reference. You would change the objectproperty references according to what you wanted to find out.

We take the example function I showed when discussing scalar functions above, giving the date of the nth instance of a particular weekday in the named month in a year, and we can build the other two function types from it. We can also run the expression within the function outside of a function. We can run timings and compare the execution plans. This will give use a fairly good indication of the relative performance of the various ways of doing it.

First we create the other versions of the function.

Now we create some test data for the function

…and quickly run some tests. (I use a very slow test server specially for performance testing-the only user, physical server)

Which, over a run of six further tests gives … Which gives a pretty stark message, particularly about the performance of Multi-statement Table functions.

When should I use a user-defined function?

Functions, of all types, are easily tested since they should encapsulate a clear component of a process, and are deterministic (always give the same output for the same input). They allow functionality to be maintained in just one place. They integrate with the flow of a batch much more smoothly than a stored procedure does, especially when results have to be passed between routines.

Multi-statement Functions are a good choice when a complex action needs to be done only once: for example, when a Metaphone needs to be calculated for a person’s surname in a customer database. Changes in Surname/lastname happen very infrequently for any individual. To take another example, the date of Easter for a particular year needs to be done just once. It is sensible, therefore, make very sure that such calculations are not done repeatedly and entirely unnecessarily, as is possible when put in an update trigger.

Inline Table-valued functions are a good way of creating views that require parameters. These are particularly useful for interfaces, because they allow controlled and limited access to the data in base tables while preventing direct access (see Schema-Based Access Control for SQL Server Databases). Under the covers, these functions can be resolved into a good query plan for accessing the base table.

Scalar functions are useful for creating XML documents that represent hierarchical information. This is because Scalar functions can return results as XML variables, and can be called recursively.

User-Defined Functions come in two flavours. The inline Table-valued functions are an excellent device. They are easy to use and maintain, and can usually be resolved into fast-running queries by the Query Optimiser. Scalar functions are a good choice if you SchemaBind them, though even then  there is always an overhead from the BEGIN …END block. Multi-statement table-valued functions are like a bandsaw in a woodworkers shop, wonderful when you’re an expert, especially when you retain a certain element of terror, but can cause some nasty problems when you use it carelessly, and without the necessary expertise. Yes, injudicious use of user-defined functions can bring any database to its knees, so use them, but with care and caution.