The SQL Server common table expression was introduced into standard T-SQL to simplify queries for which a derived table just wasn't suitable. Robert Sheldon explains CTEs in this article.

SQL Server supports two types of CTEs-recursive and nonrecursive. In this article, I explain how to create both types. The examples I provide are based on a local instance of SQL Server 2008 and retrieve data from the AdventureWorks2008 sample database.

You define CTEs by adding a WITH clause directly before your SELECT, INSERT, UPDATE, DELETE, or MERGE statement. The WITH clause can include one or more CTEs, as shown in the following syntax: 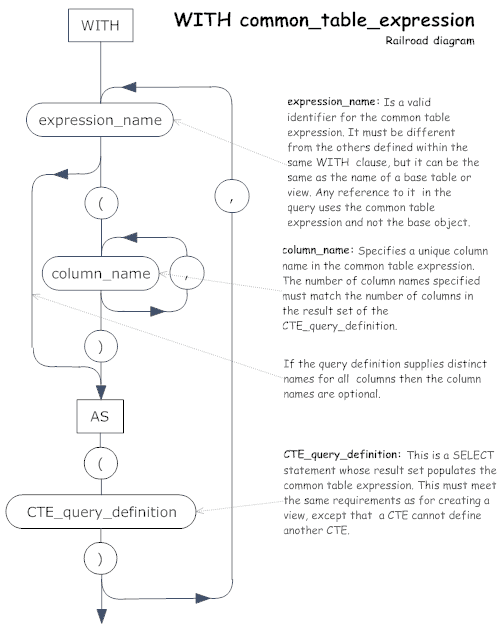 As you can see, if you include more than one CTE in your WITH clause, you must separate them with commas. In addition, for each CTE, you must provide a name, the AS keyword, and a SELECT statement. You can also provide column names (separated by commas), as long as the number of names match the number of columns returned by the result set.

After you define your WITH clause with the necessary CTEs, you can then reference those CTEs as you would any other table. However, you can reference a CTE only within the execution scope of the statement that immediately follows the WITH clause. After you’ve run your statement, the CTE result set is not available to other statements.

A nonrecursive CTE is one that does not reference itself within the CTE. Nonrecursive CTEs tend to be simpler than recursive CTEs, which is why I’m starting with this type. In the following example, I create a CTE named cteTotalSales:

After I specify the CTE name, I provide two column names, SalesPersonID and NetSales, which are enclosed in parentheses and separated by a comma. That means the result set returned by the CTE query must return two columns.

I can now reference cteTotalSales in the statement that immediately follows. For this example, I create a SELECT statement that joins the Sales.vSalesPerson view to cteTotalSales, based on the salesperson ID. I then pull the names and locations from the view and the net sales from the CTE. The following table shows the results returned by this statement. 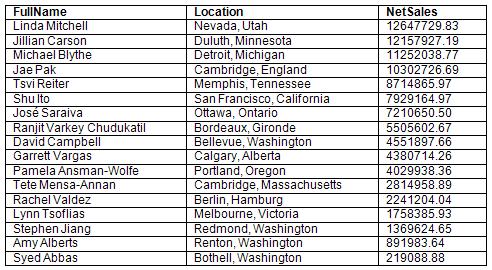 The first CTE-cteTotalSales-is similar to the one in the preceding example, except that the WHERE clause has been further qualified to include sales only from 2003. After I define cteTotalSales, I add a comma, and then define cteTargetDiff, which calculates the difference between the sales total and the sales quota.

The new CTE definition specifies three columns for the result set: SalesPersonID, SalesQuota, and QuotaDiff. As you would expect, the CTE query returns three columns. The first is the salesperson ID. The second is the sales quota. However, because a sales quota is not defined for some salespeople I use a CASE statement. If the value is null, that value is set to 0, otherwise the actual SalesQuota value is used.

Something interesting to note about the second CTE query is that I’ve joined the Sales.SalesPerson table to the first CTE-cteTotalSales-so I could calculate the difference between total sales and the sales quota. Whenever you define multiple CTEs in a single WITH clause, you can reference preceding CTEs (but not the other way around).

Once I’ve defined my CTEs, I can reference them in the first statement that follows the CTE, as you saw in the previous example. In this case, I join the Sales.vSalesPerson view to cteTotalSales and then join to cteTargetDiff, all based on the salesperson ID. My SELECT list then includes columns from all three sources. The statement returns the results shown in the following table. 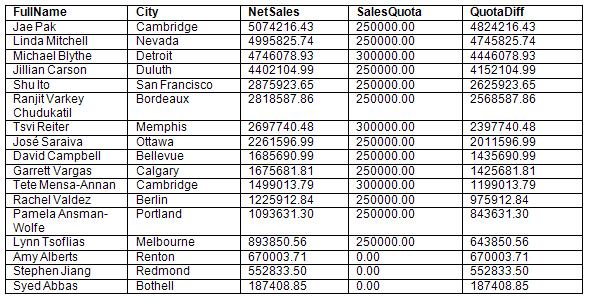 As you can see, sales data is provided for all salespeople, including the city in which they reside, their net sales, their sales quota, and the calculated difference between the two figures. In this case, everyone well exceeds the quota, where a quota has been defined.

A recursive CTE is one that references itself within that CTE. The recursive CTE is useful when working with hierarchical data because the CTE continues to execute until the query returns the entire hierarchy.

A typical example of hierarchical data is a table that includes a list of employees. For each employee, the table provides a reference to that person’s manager. That reference is itself an employee ID within the same table. You can use a recursive CTE to display the hierarchy of employee data, as it would appear within the organizational chart.

Note that a CTE created incorrectly could enter an infinite loop. To prevent this, you can include the MAXRECURSION hint in the OPTION clause of the primary SELECT, INSERT, UPDATE, DELETE, or MERGE statement. For information about using query hints, see the topic “Query Hints (Transact-SQL)” in SQL Server Books Online.

To demonstrate how the recursive CTE works, I used the following Transact-SQL statements to create and populate the Employees table in the AdventureWorks2008 database:

As you might realize, the AdventureWorks2008 database already includes the HumanResources.Employee table. However, that table now uses the hierarchyid data type to store hierarchical data, which would introduce unnecessary complexity when trying to demonstrate a recursive CTE. For that reason, I created my own table. However, if you want to try out a recursive CTE without creating and populating a new table, you can use the AdventureWorks sample database that shipped with SQL Server 2005. The HumanResources.Employee table in that database stores the data in a way similar to the table I create above.

After I created the Employees table, I created the following SELECT statement, which is preceded by a WITH clause that includes a CTE named cteReports:

As you can see, the CTE returns five columns: EmpID, FirstName, LastName, MgrID, and EmpLevel. The EmpLevel column refers to the level in the hierarchy in which the employees fit. The highest level of the hierarchy is 1, the next level is 2, followed by 3, and so on.

Now lets look closer at the statements themselves. The first statement, the anchor member, retrieves the employee ID, first name, last name, and manager ID from the Employees table, where the manager ID is null. This would be the employee at the top of the hierarchy, which means this person reports to no one. Consequently, the manager ID value is null. To reflect that this person is at the top of the hierarchy, I assign a value of 1 to the EmpLevel column.

One other item to notice about the second statement is that, for the EmpLevel column, I add the value 1 to the EmpLevel value as it appears in the CTE. That way, each time the statement loops through the hierarchy, the next correct level is applied to the employees at the level.

After I define my WITH clause, I create a SELECT statement that retrieves the data from the CTE. Note, however, that for the Manager column, I retrieve the first and last name of the employee associated with the manager ID in the CTE. This allows me to display the full name of the manager for each employee. The following table shows the result set returned by the SELECT statement and its CTE.

As you can see, the CTE, whether recursive or nonrecursive, can be a useful tool when you need to generate temporary result sets that can be accessed in a SELECT, INSERT, UPDATE, DELETE, or MERGE statement. In a sense, a CTE is like a derived table: it’s not stored as an object and is valid only during the execution of the primary statement. However, unlike the derived table, a CTE can be referenced multiple times within a query and it can be self-referencing. And best of all, CTEs are relatively easy to implement.

0 30
After answering many forum entries from developers asking for help with dealing with SQL that involved time intervals and ranges, Dwain dreamed of a generalized tool that sets up time slots of various sorts without the need to experiment; that could do the heavy lifting, so that developers could do aggregations and reports based on time intervals without the hard graft. Here is Dwain's dream made reality. … Read more
0 30