When developing an application that accesses SQL Server, you need to set up a security model, so each user gets the access they need based on their job duties. Some applications require the same access for all users, while other application might require different security access rights based on the role a user has in the organization. The best practice for providing user access is to use role-based security. SQL Server provides user-defined Server and Database roles for defining security rules for different user security needs. This article will discuss how to use user-defined server and database roles to provide secure access to SQL Server resources.

What is Role-Based Security?

When role-based security is used, the actual access permissions to SQL Server resources are granted to a role and not a specific user. Role-based security reduces the amount of administration work needed to grant and manage security when multiple application users require the same access to SQL Server resources. Once a role has been set up, and the appropriate permissions have been granted, it is just a simple matter of adding users to the role to provide them with the same security access. Without using roles, an administrator would need to grant the same permissions to each user, thus causing additional administration work. There is also the possibility of making an error, resulting in some users getting the wrong set of permissions.

The first step to setting up the Junior DBA user-defined role is to create the role. The new role can be created using TSQL or SSMS. Listing 1 shows the TSQL code to create this role.

The code in Listing 1 only creates the role and gives the ownership of this role to the account SA, by providing the AUTHORIZATION keyword followed by the login SA. If the authorization keyword and login were omitted, then my login would have owned this user-defined server role. This TSQL code has only created the role but did not assign any server rights to the new role.

I could have also created this server role using SSMS by performing the following steps.

If I had used the SSMS steps to create my Junior DBA role, then the New Server Role window in Figure 1 would have been displayed. 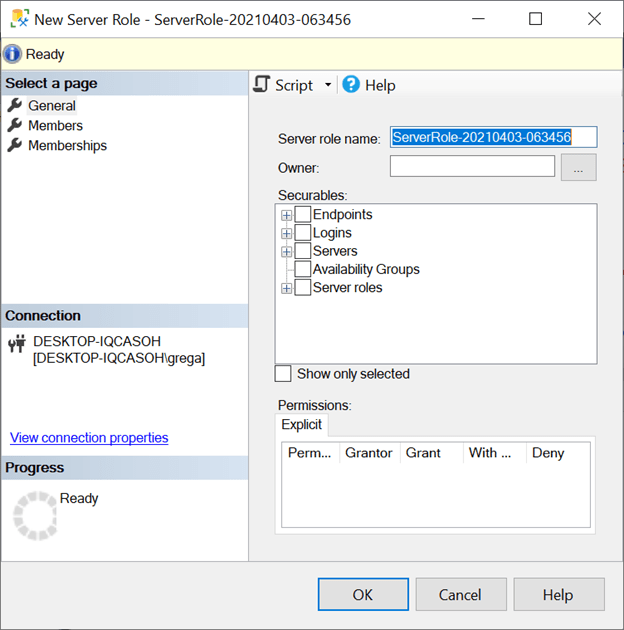 As you can see, SSMS automatically generated a user-defined role name of ServerRole-20210403-063456. Since this isn’t the name I want for my role, I now need to type over that automatically generated name with my role name of Junior DBA and enter dbo in the owner field. At this point, I could click on the OK button, and this role would be created, just as if I ran the TSQL code in Listing 1. But since I want my new Junior DBA role to have some rights, let me move on and show you how to assign rights to this new role using SSMS.

In Figure 1, the Securables section on the right side of the window has a list of server-level rights that can be granted to a user-defined role. For this demonstration, I’m only going to give my junior DBA role the following rights: view any database, view any definition, and view server state information. To give these rights, I first click on the Servers item and then scroll down and grant permissions to those view rights I want my junior DBA to have. After doing this, my New Server Role window looks like what is shown in Figure 2. 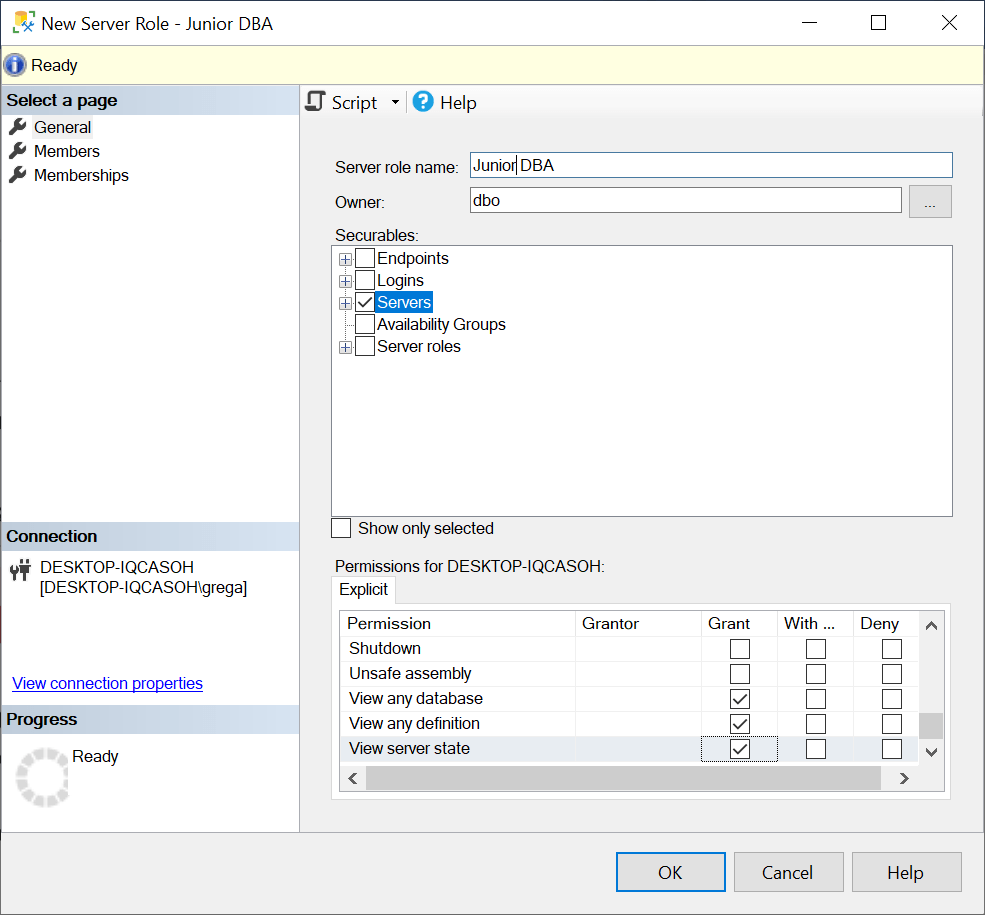 The last step needed to create my new Junior DBA role with these rights is to click on the OK button.

The rights I provided to my new junior DBA role using SSMS could have also been granted using TSQL by running the script in Listing 2.

Listing 2: TSQL to grant permissions to the Junior DBA role

At this point, the new user-defined server role Junior DBA role has only been created and doesn’t contain any members. Before I can add members, I need to create a login for my junior DBA. For this demo, I will create a SQL authenticated login named JD using the TSQL code in Listing 3.

To make the JD login a member of the Junior DBA role, I could use SSMS to make it a member of this role from the properties of the login or the role. I can also use the TSQL code in Listing 4.

I have not seen server roles used that much in the real world, but user-defined server roles provide value when you want to create a role that has limited server-level permissions.

In order to show how to add databases users to each of these different user-defined roles, I will create the following logins and AdventureWorks2019 database users: Tom, Dick, and Sally. These logins and users will be created using the TSQL Code in Listing 5.

After completing these steps, the Database Role – New window in Figure 3 will be displayed. 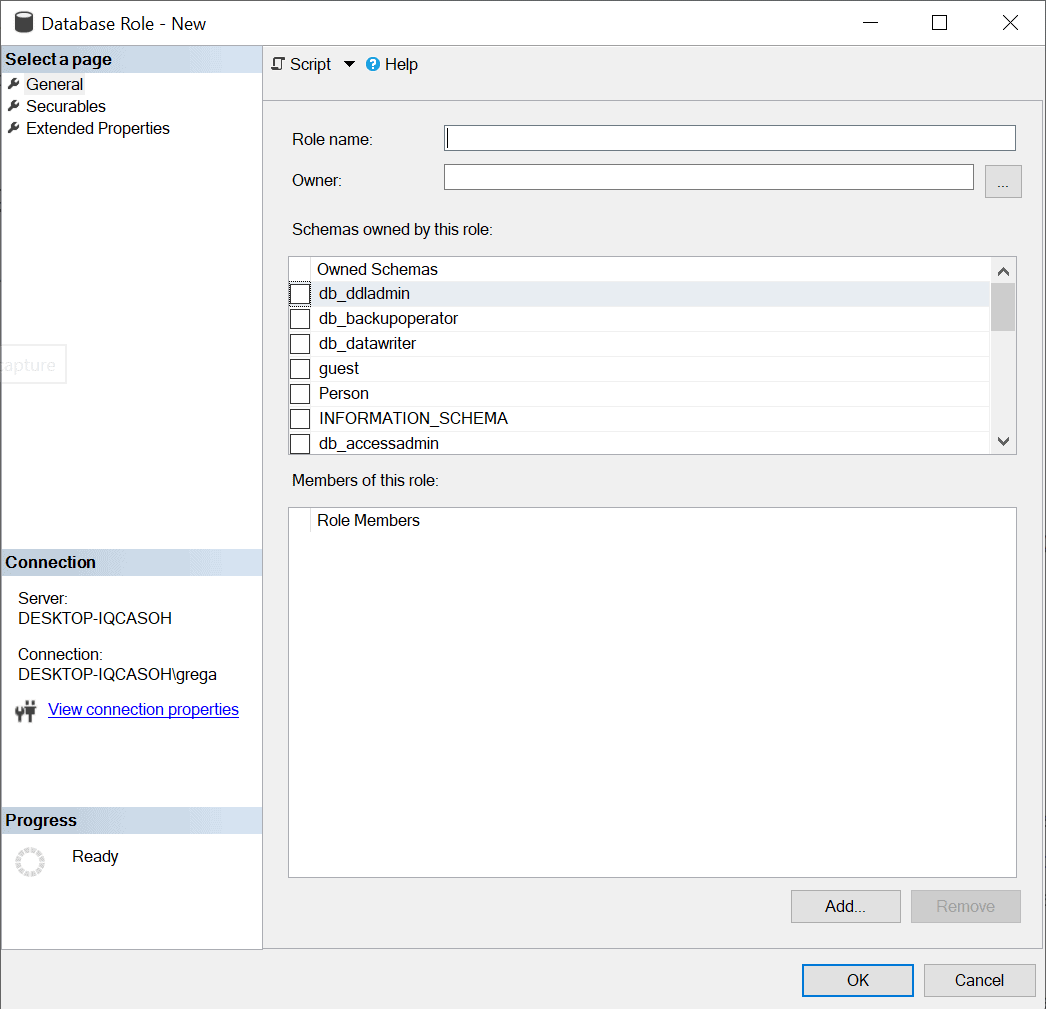 With the General tab selected on the left, I will enter SalesManager in the Role name field on the right. Since I want dbo to own this new role, I enter dbo in the owner field. To add members to this role, I click on the Add button. Doing this brings up the Select Database User or Role window, where I will then use the Browse button to select Sally to be added as a member to this new role, as shown in Figure 4. 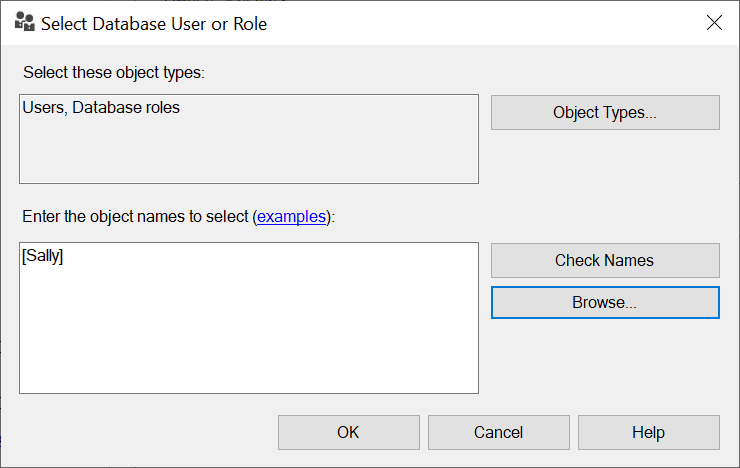 Figure 4: Adding Sally as a member

To finish adding Sally as a member to this new role definition, I click on the OK button. Upon doing this, the window in Figure 5 is displayed. 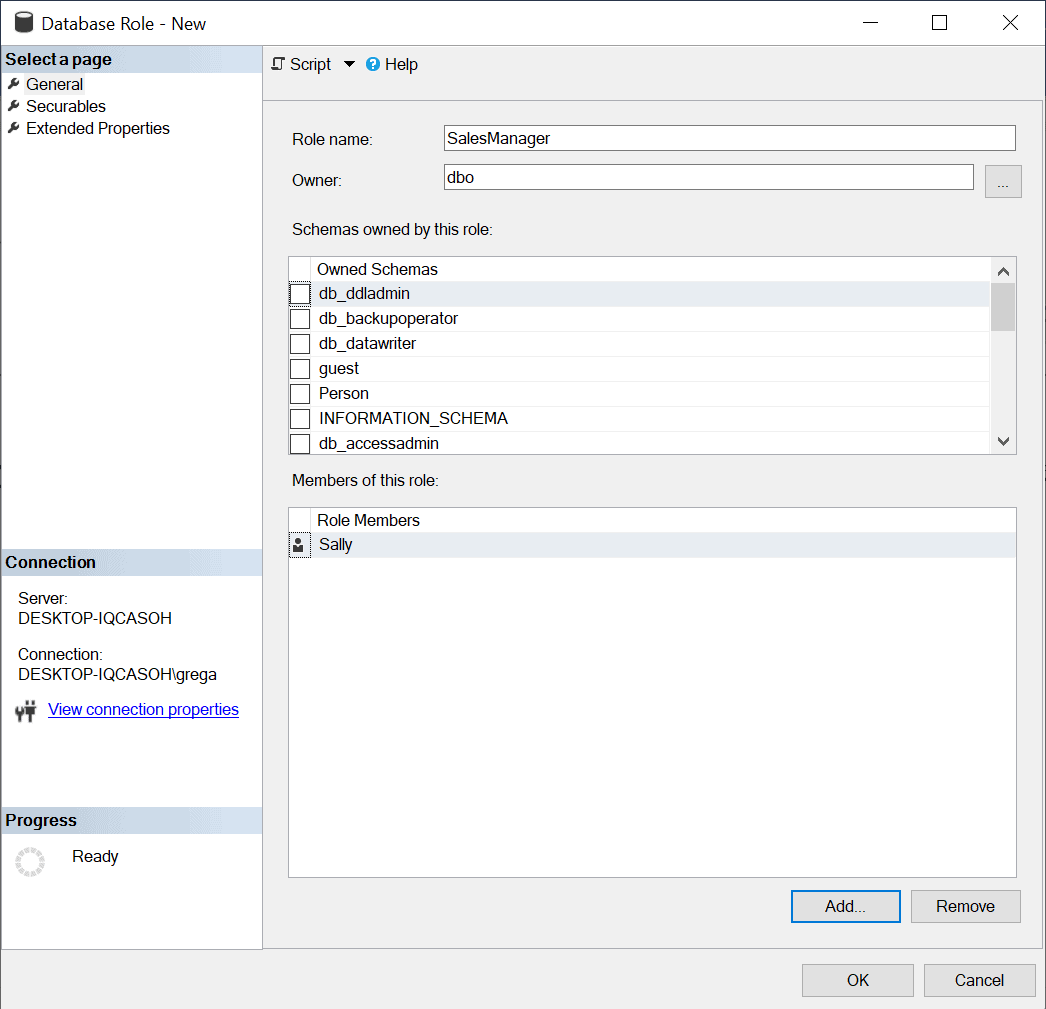 Figure 5: New Database Role with Sally as a member

To finish creating this role, I click on the OK button. At this point, all I’ve done is create a new role named SalesManager that has Sally as the sole member of this role. Alternatively, I could have used the script in Listing 6 to create the SalesManager role.

Listing 6: Creating SalesManager role with Sally as a member

To finish setting up this role, I will need to grant permissions. Since the SalesManager needs to be able to manage all resources in the database, I will give this role the same permissions as the fixed database role db_owner. The easiest way to accomplish this is to make the SalesManager role a member of the db_owner fixed database role, which is accomplished by running the code in Listing 7.

Listing 7: Adding SalesManger roles as a member of the db_owner role

The next security profile to set up for my hypothetical application is ProductionControl. User Dick will be a member of this role, and the role needs to have SELECT, INSERT, UPDATE, and DELETE rights to all tables in the Production Schema, as well as need read access to all tables in the AdventureWorks2019 database. To create this role, add Dick as a member, and provide the necessary permissions, I will run the code in Listing 8.

The final security profile I need to set up for my hypothetical application is SalesPerson. For this security profile, I will be created a user-defined database role name SalesPerson. I will add the database user Tom as a member to this role. This role will need SELECT, INSERT, UPDATE, and DELETE permissions to all tables in the Sales schema and will need read access to all tables in the AdventureWorks2019 database. To create this role and all the necessary permissions, I will run the script in Listing 9.