Most database queries require joining tables. In this article, Greg Larsen explains the ins and outs of joining tables in SQL Server.

There are times when you need to join multiple tables to retrieve the result set needed. SQL allows for multiple tables to be included in the FROM clause along with the criteria for how to join tables. In SQL Server there are a number of different ways to join tables. In this article, I will be discussing the ins and outs of joining two tables in SQL Server using the inner and outer join operators.

The Three Parts of a Join Operations 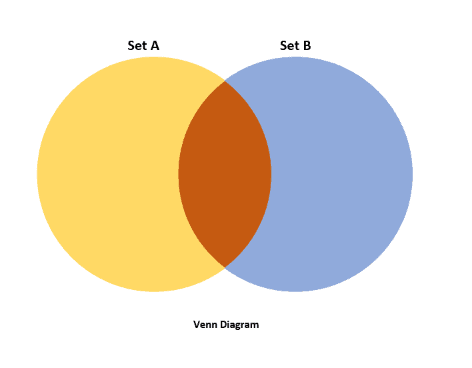 Each section of the Venn diagram is represented by a different color: yellow, brown, and blue. The members of Set A that don’t match with SET B will be contained in the yellow bucket. Members of SET A and B that match end up in the brown bucket. Lastly, the members in the blue bucket are those members in SET B that don’t match with SET A. The Venn diagram can visually represent the resulting sets created when an inner or outer join operation is performed.

To demonstrate how the different inner and outer join operations work, the examples use two test data tables created in the tempdb database. These two tables are SetA and SetB. If you want to follow along and execute the examples in this article, you can create the two test tables using the code in Listing 1.

The two tables created when Listing 1 is run can be represented by the Venn diagram in Figure 2. 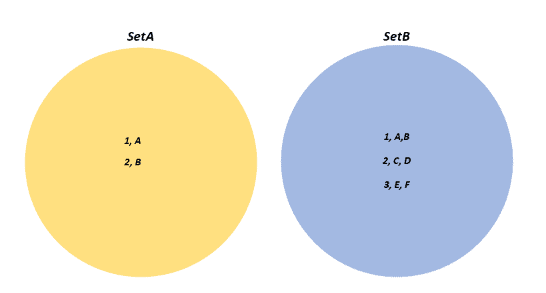 The INNER JOIN operator is probably the most used join operation found in T-SQL code. This operator returns rows that match when two sets are joined based on one or more search criteria. The brown section in Figure 3 represents the result set of an INNER JOIN operation between the two test data tables, SetA and SetB, based on the search criterion SetA.Col2 = SetB.ColB. 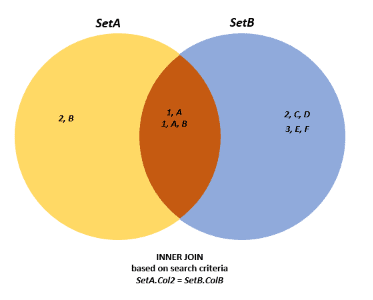 The T-SQL code in Listing 2 demonstrates one way to write an INNER JOIN operation to return the matching rows found in the brown section of the Venn diagram in Figure 3.

Report 1 shows the results when the code in Listing 2 is executed.

The code in Listing 2 identifies the two tables, SetA and SetB, to be joined in the FROM clause, with the INNER JOIN operator between them, followed by an ON clause. The ON clause identifies the search criteria to be used when joining the two tables. In Listing 2, the ON clause specifies SetA.Col2 = SetB.ColB as the search criterion. This criterion specifies that the INNER JOIN operation is to find all the rows in SetA that have corresponding matching rows in SetB, where Col2 in SetA is equal to ColB in SetB. Let’s walk through how this join operation works.

The matching search criterion used in Listing 2 uses SQL-92 join syntax. This is not the only join syntax supported by SQL Server.

In the early days of SQL, the various database vendors started implementing SQL code differently. This led to inconsistencies in how SQL code was written. In the 1980s, the American National Standards Institute (ANSI) started working on a SQL language standard. Over time the SQL standards changed the way joins could be written.

The code in Listing 2 above uses SQL-92 join syntax, which requires a join operator to be specified between the joined sets and an ON clause to identify the join criteria. Prior to SQL-92, a different syntax for joining data was used which is shown in Listing 3.

The INNER JOIN operation returns rows with matching members in both the left and right sides of joined sets. However, there are times when rows might need to be included in result sets even when they don’t match. This is where the outer join operations can help. 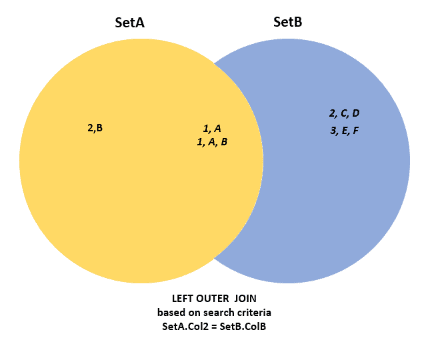 By comparing Figure 4 to the Venn diagram for the INNER JOIN found in Figure 3, the matched row of SetA, in the brown section, and the unmatched members in the yellow section of SetA have been combined into a single yellow circle. The members of this yellow circle are the members of SetA and SetB that will be returned from the LEFT OUTER JOIN operations. Listing 4 contains the T-SQL code to produce the LEFT OUTER JOIN results represented by Figure 4.

Report 2 shows the output when Listing 4 is executed.

The results in Report 2 have one row that matched the search criterium and one that didn’t match. The row that didn’t match the column values for the table on the right side of the LEFT OUTER JOIN operation is set to NULL. It is easy to identify those rows that did not match the search criterium by checking to see if any of the columns from the right table is null, as done in Listing 5.

When the code in Listing 5 is run, only the last row in Report 2 will be returned.

Report 3 shows the results when Listing 6 is executed.

Report 3: Results when Listing 6 is run

Report 3 shows that all the rows from the right table, SetB, are returned. For those rows in SetB that don’t match SetA, the NULL value was returned for the SetA columns in the result set.

If you need to find all the rows in SetB that don’t match the search criterion of SetA.Col2 = SetB.ColB, then the code in Listing 7 can be run.

Report 4 shows the results produced when Listing 7 is executed.

Report 5 shows the results when Listing 7 is run.

The first row in Report 5 is the only row that meets the search criterion identified in Listing 8, hence why each column has a value. The second row is the left row that doesn’t match any rows on the right; it could be found using the LEFT OUTER JOIN. The third and fourth rows are the rows from the right that don’t match the rows from the left; they could be found using a RIGHT OUTER JOIN operation.

The code in Listing 9 shows how to find only those rows in either the left or right table that don’t match the search criterion.

Report 6 shows the output when Listing 9 is executed.

Report 6: Output when Listing 9 is run

When Listing 10 is executed the results in Report 7 is produced.

Report 7: Output when Listing 10 is run

In Listing 10 only the rows where both Col1 from Set1 matches ColA from SetB and Col2 from SetA matches ColB from SetB.

The Ins and Outs of Joining tables

Joining tables is a key skill every T-SQL programmer needs to master. In this article, I used Venn diagrams and T-SQL code examples to show on how the INNER JOIN, LEFT OUTER JOIN, RIGHT OUTER JOIN and FULL OUTER JOIN operations can be used to find different sets of records when joining two sets. Hopefully, next time you need to find the rows in one of the three parts produced when joining two sets you will know which join operation and search criteria to use.

0 1
Once data is in a table it needs to be maintained. New records will need to be added, and existing records will need to be updated, and/or deleted. To keep data maintained, the insert, update or delete actions may need to be performed. This article will show how those three data manipulation language (DML) actions can be synchronized together within a single basic MERGE statement.… Read more
0 1