The SQL Server identity column is used to populate a column with incrementing numbers on insert. In this article, Greg Larsen explains how it works.

When designing a table for a database, a column might need to be populated with a different number on every row inserted. An identity column might be a good way to automatically populate a numeric column each time a row is inserted. In this article, I will discuss what a SQL Server identity column is and how it works.

What is a SQL Server identity column?

The values automatically generated for each row inserted are based on the seed and an increment property of the identity column. The following syntax is used when defining an identity column:

Script 1: Creating a table with an identity column

The WidgetID is the identity column with a seed value of 1 and an increment value of 1.

When the code in Script 2 runs, the output in Report 1 is displayed.

Report 1: Output when Script 2 is run

Remember that the seed and increment values do not have to be 1 and 1, respectively; they could be whatever values are appropriate for the table. For example, a table could use a seed value of 1000 and an increment of 10, as I have done for the WidgetID column.

Uniqueness of an identity column

Identifying identity columns and their definitions in database

There are a number of ways to identify the identity columns and their definitions in a database. One way is to use SQL Server Object Explorer, however, the identity column can’t be determined by just displaying the columns in a table, as shown in Figure 1 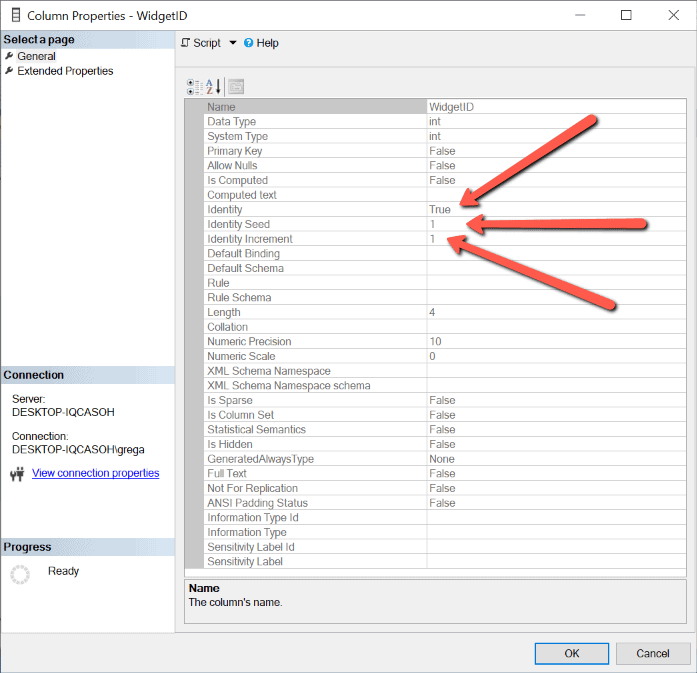 If the Identity property has a value of True, then the column is an identity column. The seed and increment values are also displayed.

Script 4: Script to display all identity values in a database

Script 4 returns the output in Report 2.

Report 2: Output when script 4 is run

Note that the last_value column for the TableName of DifferentSeedIncrement has a value of NULL. This means no rows have been inserted into this table to be able to set the LastValue.

Adding an identity column to an existing table

The output of Script 5 is shown in Report 3.

Report 3 shows that the new InvoiceID column was added, the identity values for this column were automatically populated on all existing rows.

Altering an existing table to define an identity column

To accomplish modifying an existing column to be an identity column, the script uses the ALTER TABLE … SWITCH command. The SWITCH option was added to the ALTER TABLE statement in SQL Server 2005 as part of the partitioning feature. The TSQL code in Script 6 uses a temporary work table and the SWITCH option to support altering an existing column to make it an identity column.

Script 6: Altering an existing column to be an identity column

To use the SWITCH option on the ALTER TABLE statement, the column being changed to an identity column on the original table must not allow nulls. If it allows null, then the switch operations will fail.

Make sure to reseed the identity column of the new table using the DBCC CHECKIDENT command. If this is not done, then the next row inserted will use the original seed value, and duplicate identity values could be created if there is not a primary key, or unique constraint, or unique index on the identity column.

All foreign keys will need to be dropped prior to running the ALTER TABLE …SWITCH command.

If indexes exist on the original table, then the temporary table will also need the exact same indexes, or the switch operation will fail.

While the ALTER TABLE …SWITCH command is running, there must be no transactions running against the table. All new transactions will be prevented from starting while the switch operation is being performed.

In the previous example, I reseeded the identity column value by using the DBCC CHECKIDENT statement. There are other reasons why an identity column value might need to be reseeded, like when several rows were incorrectly inserted into a table, or erroneous rows were deleted. Mistakenly inserting erroneous rows causes the current identity to be increased for each row added. Therefore, after all the bad rows have been deleted, the next row will use the next identity value and leave a large gap in identity values. If this mistake has been made, then reseeding the identity value ensures there isn’t a big gap of missing identity values.

The DBCC CHECKIDENT command is used to reseed an identity value for a table. This command has the following syntax:

The table_name parameter is the name of the table that contains an identity specification. The table must contain an identity column, otherwise, an error will occur when the DBCC CHECKINDENT command is run. If no other options are added along with this command, then the current identity value will be reset to the maximum value found in the existing identity column.

Be careful with using the RESEED option with a new seed value. SQL Server doesn’t care what value is used for the new seed. If the new seed is set to a value less than the maximum seed value in the table, duplicate identity values might be created.

0 2
Once data is in a table it needs to be maintained. New records will need to be added, and existing records will need to be updated, and/or deleted. To keep data maintained, the insert, update or delete actions may need to be performed. This article will show how those three data manipulation language (DML) actions can be synchronized together within a single basic MERGE statement.… Read more
0 2