To guarantee the order of a result set, you must use an ORDER BY clause. In this article, Greg Larsen explains what you need to know about ORDER BY.

Syntax of the ORDER BY clause

Figure 1 contains the syntax for the ORDER BY clause as found in the Microsoft Documentation. 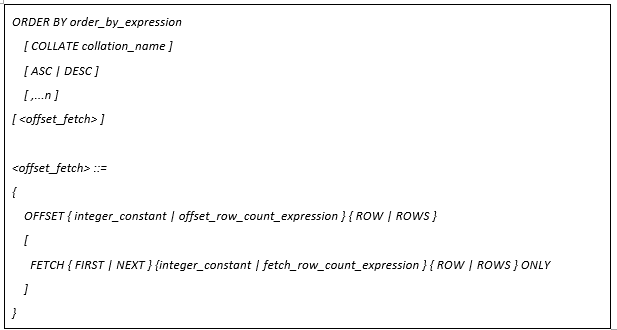 This article will cover a number of examples to show the different ways to use the ORDER BY clause. Each of these examples will select data from a table named TestData. If you want to follow along and run these examples, you can created this table by using the code in Listing 1.

Sorting based on a single column

Listing 2: SELECT statement without an ORDER BY clause

The ORDER BY clause will sort data based on one or more columns. The code in Listing 2 selects the StateName, and CityName columns from the TestData table and sorts the results set based on the single column StateName.

Listing 3: Sort based on single column

Report 2 shows the results when Listing 3 is executed.

The results could be sorted in descending order by specifying DESC next to the StateName column in the ORDER BY clause, as has been done in Listing 5.

Listing 5: Sorting results based on StateName in descending order

The code in Listing 5 produces results shown in Report 3.

Report 3: The results from running Listing 5

You may have noticed that the StateName column contains some state names where the first character of the name is in uppercase and others in lowercase. You may be wondering why these values with similar cases where not sorted together. This is because they are sorted based on the collation of the StateName column, which, in this case, is case insensitive.

Listing 6: Display the collation of tempdb

Report 4 shows the results when I execute the code in Listing 7. If you have a different collation, you will see different results.

By reviewing the collation_name column, you can see that each character data column in my TestData table has a collation of SQL_Latin1_General_CP1_CI_AS.

By comparing Report 5 with Report 3, you can see that the state names with same case values are now sorted together when the StateName column was sorted based on a collation that is case sensitive.

You would not think that sorting numbers would be a big deal. They are not when the numbers are stored in a numeric column like the ID column found in my TestData table. When a numeric value is stored in a character column, like the CharID column in my sample data, the results may not be sorted according to numeric order. To demonstrate this, execute the code in Listing 9.

Report 6 shows the results when Listing 9 is run. 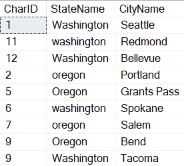 In Report 6, the numeric values in column CharID do not seem to be sorted correctly. Meaning the values 11, and 12 appear before the value 2. This is the correct sort order for character data, but not for numeric data. In order to get numeric data stored in a character column to sort correctly based on the numeric values, all that needs to be done is to use the CAST function in the ORDER BY clause, as shown in Listing 10.

By using the CAST function to covert the CharID column to a numeric data type of tinyint, SQL Server will sort the StateName column, based on its casted numeric representation. I’ll leave it up to you to run this code to verify that data is now sorted correctly for numeric values. Listing 10 also shows how a function or expression can be used in the ORDER BY clause.

Sorting based on column alias name

Alias names are also supported by the ORDER BY clause. This is especially useful when the sort order needs to be based on concatenating a couple of columns together, as shown in Listing 11.

Report 7 shows the output when Listing 11 is executed.

Sorting based on ordinal position

Listing 12: Sorting based on ordinal position

When the code in Listing 12 is executed, it produces the results in Report 8.

Report 8: Output when Listing 12 is run

Sorting based on multiple columns

All the examples so far have only showed how to sort a result set based on a single column. SQL Server also supports sorting data based on multiple columns. The code in Listing 13 shows how to sort my TestData using both the StateName, and CityName columns.

Listing 13: Sorting based on multiple columns

Report 9 shows the output produced when Listing 13 is run.

The data is now sorted based on StateName and CityName columns in ascending order.

Sorting data in both descending and ascending order

Report 10 can be used to verify that StateName and CityName are sorted in DESC and ASC order, respectively.

Report 10: Output when Listing 14 is executed

Sorting data based on columns not in select list

Columns used in the ORDER BY clause don’t have to be included in the selection list. To demonstrate this the code in Listing 15 can be run.

Listing 15: Sorting based on a column not in the selection list

The output in Report 11 is generated when the code in Listing 15 is executed. These results are sorted based on the column Founded, which is not in the selection list.

Report 11: Results when Listing 15 is run

To verify the results are the order based on the Founded column value the code in Listing 16 can be run.

Listing 16: Code to identify when cities are founded

I’ll leave it up to you to run the code in Listing 16 to determine the dates that each city was founded.

The ORDER BY clause also supports returning only a subset of rows from a sorted set by using the offset fetch option. To identify the subset of rows to display an OFFSET and FETCH value needs to be identified. The OFFSET value tells how many rows in the sorted set should be skipped before rows are returned. Whereas the FETCH option identifies the number of rows to return. The code in Listing 17 shows how to use the offset fetch option of the ORDER BY clause.

Report 12 shows the results when Listing 17 is executed.

The numeric value for OFFSET and FETCH options can be provided as expressions. Using an expressions and the offset fetch option is a great method of paging through a sorted set a few records at a time.

There are a number of limitations when using the ORDER BY clause. Below are a few of the common limitations worth noting:

For a complete list of limitations review the limitation section in the Microsoft Documenation.

Ordering a result set in a meaningful way makes it easier to review the returned data. While sorting data seems like a simple concept, in reality there are many nuances that need to be considered when sorting data, like default sort order, column collation settings, numerical data and use of aliases to name a few. Hopefully, this article provided enough examples to help out next time a result set needs to be produced in just the right sorted order.

Insights from the SSRS database

0 1
The SSRS database contains a wealth of undocumented information that can help administrators. In this article, Edward Pollack explains how to get to the data and ways to use it.… Read more
0 1