Did you know that SQL Server supports pausing and resuming the index creation and rebuild processes? The resumable online index rebuild option is currently supported in Azure SQL Database and SQL Server 2017 With the introduction of the public preview of Azure SQL Database and the community technical preview (CTP) of SQL Server 2019, the SQL Server team has enhanced the pause and resume functionality by added the resumable online index create option.

If you have ever had to cancel an online rebuild or create index process on a very large table because the index rebuild or creation process didn’t complete during your maintenance window, or consumed valuable resources causing other queries to run slow, then you need to check out the resumable online index options.

But if you migrate your older versions of your databases to SQL Server 2017, you can restart your online index rebuild operations. Plus, with the rollout of the previews of Azure SQL Database or SQL Server 2019, you can pause and restart both your online rebuilds and creation processes.

In order to test out the new pause and resume functionality of online resumable index operations, I decided to create a table that contains 60 million rows. If you want to follow along and run the code in this article, you can use the code found in the Listing 7 in the last section of this article titled “Create Sample Data.” (Another option is to create the table and populate it using Redgate’s SQL Data Generator.) That code creates a database named SampleData and then creates and populates the Visits2 table. The table definition looks like the image found in Figure 1: 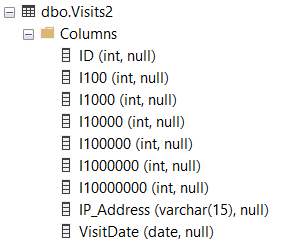 How to Pause and Resume an Online Index Operations

To test out the new pause and resume functionality of an online index operation, you will first create a non-clustered index online. The index will be on the I100 column of the Visits2 table using the script in Listing 1. Keep in mind the resumable option for the create index operation is only available in the preview versions of Azure SQL Database and SQL Server 2019 at the time this article was written. You cannot create a resumable online index in any version of SQL Server except the CTP versions I just mentioned.

The RESUMABLE=ON parameter in the WITH clause is what makes this CREATE INDEX command resumable. Note that you also have to include the ONLINE = ON clause when you use the RESUMABLE option. If you leave off the ONLINE option, you will get an error.

When you run the code in Listing 2, you will find that the session that was running the CREATE INDEX statement gets disconnected and the messages in Figure 2 are displayed.

Once you have paused your online resumable index operation you can determine how far along the process progressed prior to being paused by using a new system view that came out in the current version of Azure SQL Database, or SQL Server 2017 named sys.index_resumable_operations. By running the code in Listing 3, you can see how far along the online resumable index creation operation progressed prior to being paused.

Listing 3: Show how far the resumable index create operation got prior to being paused

When you run the code in Listing 2, you will see something like the output in Figure 3.

Figure 3: How far the index creation process got prior to being paused

By looking at the pecent_complete column in Figure 3, you can see that the progress shows 64.33% through the creation process. Plus if you look at the state_desc column, in Figure 3, you can see the index creation process is in a PAUSED state. Note you might also want to use the sys.index_resumable_operations system view to review the progress status of your index prior to pausing it, just to see if it is almost finished. No sense in pausing something that is just about ready to complete.

To restart a paused indexing process, all you have to do is run the code in Listing 4 in a query window.

You might be thinking you could start a second non-clustered online resumable online index process on the same table while an existing online reusable index is running. However, if you try to start a second non-clustered online resumable index operation, or any index operation, on the same table as one already running you will get the error showing in Figure 4.

As you can see you can’t run a second resumable index operation while the first one is running.

You also might think you could just pause the first index operation so you can start the second one. But if you try this you will get the messages shown in Figure 5.

Figure 5: Error message when starting second index operation when another one is paused

As you can see SQL Server does not support running a second online resumable index operations at the same time, even if one of them is paused.

So far, you have just tested out pausing and resuming an online resumable index create operations. But you can also pause and resume an index rebuild operation by adding the RESUMABLE = ON option to your ALTER INDEX statements. The code in Listing 6 shows how you would run an online resumable REBUILD operation on the NC_Visits2_1 non-clustered index.

When I was reviewing this new pause and resume functionality for the online index creation and rebuild operations, I made the following observations:

In Listing 5, you will find the code I used to create my contrived sample database (SampleData) and the table (Visits2) I used to support my testing for this article.