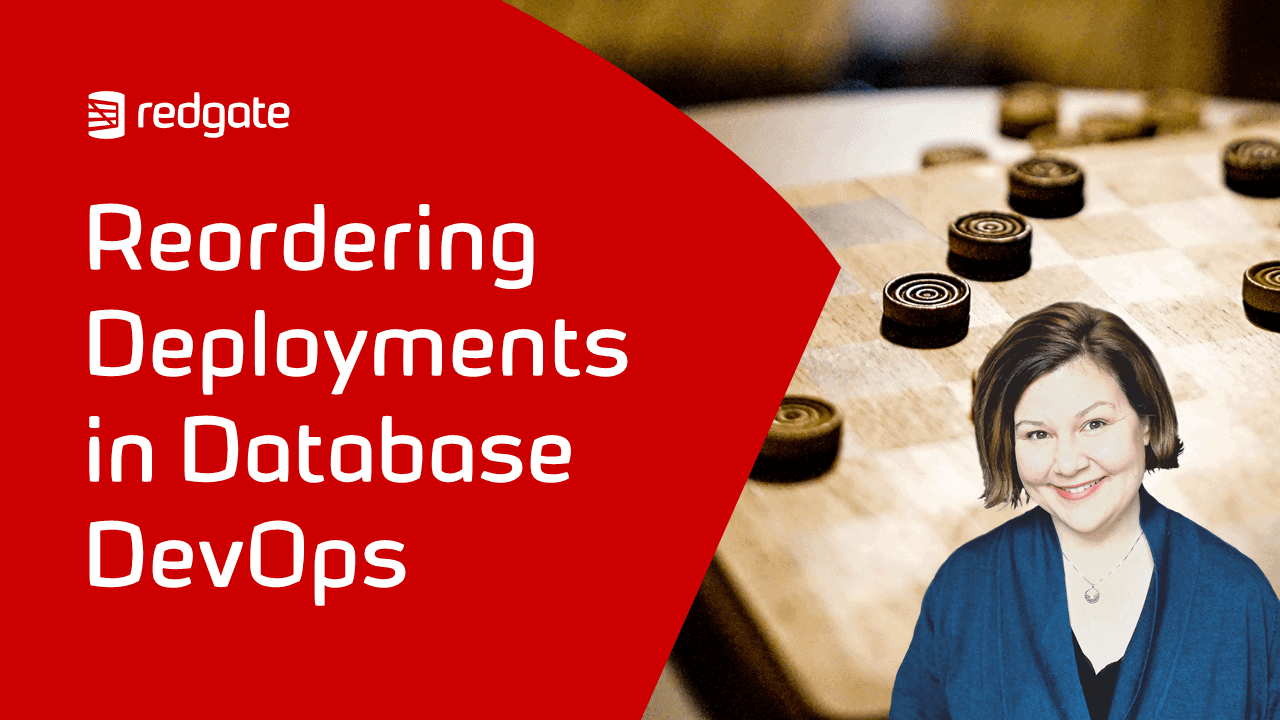 We recently received an interesting question in our Redgate forums from Peter Daniels about altering the order of deployments in database DevOps. The question includes the following scenario:

For the sake of simplicity, Peter mentions that for this example, “we know that feature 2 is schema-isolated and does NOT depend on feature 1.”

Peter is primarily asking about Git branching workflows in his question. In my opinion, branching workflows are only one of several strategies that may help regarding this situation, so I’m going to zoom out a little bit and consider branching in the context of other practices that can help.

Essentially, I believe some alternative strategies flow more easily long term and support a simpler branching strategy than you might arrive at by thinking about this problem only through the lens of branching workflows.

In this post I’ll cover four big picture strategies that may help, then dig into some technical details for managing this in SQL Change Automation (the tool our question is about). All strategies listed may be used individually or combined with one another.

One useful strategy in authoring database changes is to use a design pattern that focuses on always writing backwards compatible changes. This model known by a few names:

With this design pattern, database deployments include small changes which are designed to not impact the applications using the database. This is the “expand” phase.

Finally, after enough time has elapsed to be confident that the new functionality is working well, older structures that are no longer needed may be cleaned up. This is the “contract” phase.

This pattern tends to work best for teams who are able to deploy frequent sets of small changes to their databases using Agile methodologies.

The Expand/Contract model has multiple benefits, as it:

The more skilled your team becomes at using the Expand/Contract pattern, the less often you are likely to need to “pull” a deployment from the planned queue.

Another strategy that helps with this problem is the ability to quickly and easily re-provision the environments involved in your database DevOps pipelines.

If we have the ability to quickly create the databases for our integration environment, this gives us the ability to handle the scenario above with the following workflow:

Having the flexibility to recreate environments quickly has a lot of perks: if we can easily “reset” an environment to a production-like state then this gives us a lot of confidence in exactly how our modified code branch is going to deploy. If we make any mistakes in “removing” code from the branch, then we are very likely to be able to find that in the process of doing this fresh deployment to the environment.

In order to implement this strategy, we need some tooling to help us implement the database provisioning in a way that isn’t slow or a lot of work. This can be done with data virtualization technology like Redgate’s SQL Clone, with writable SAN snapshots from storage vendors– many of which have APIs which support automation, or with related technology from other storage or software providers.

Like the Expand/Contract model, flexible database provisioning combines well with many tools and processes. Embracing either (or both) of these strategies can help you implement a simpler branching model with fewer long-lived branches to manager and simpler deployment pipelines.

Sometimes customers can’t meet their needs with the strategies above for a variety of reasons. Perhaps they can’t work in an agile fashion due to political or implementation constraints and need to periodically deploy larger groups of changes in a waterfall pattern. Or perhaps an organizational separation between development and operations is preventing them from being able to embrace on-demand database environments.

Some of these customers find success with using an approach to database versioning where they maintain their source code in a “hybrid” fashion, using two folders in a single source control repository. Redgate offers a solution which provides this approach (video, article), but others might be able to create a similar approach on their own by combining other tooling.

In this hybrid approach:

This model may suit teams for a few reasons. There may be a large number of team members who prefer a low-code approach where they primarily work with GUIs and use lightweight tools to capture database state on a regular basis, and only worry about what the deployment code will look like when they are getting ready to release. Perhaps the deployment code is primarily ordered and crafted by a smaller group of developers who specialize in implementation details for that database platform. Or there may not be much visibility at all regarding the order of deployments for many team members during a large part of the development process.

Another strategy is to maintain environment specific branches. An example of this strategy is described in “ENV Branching with Git.”

In this branching model, feature branches are used in combination with environment specific branches. An example of how code might flow through this model is:

Although this model may sound simple at first, complexities creep in when you begin to look closely at the challenge of maintaining database state. While this model works well for some teams, it is not a “simple trick” to solving this problem by itself. Both the Expand/Contract model and the ability to provision databases on demand help keep this model simple.

While it’s really valuable to consider the strategies listed above, how changes flow through your pipelines will also vary based on the tools you’re using to version control your database code.

Our forum question is about Redgate’s SQL Change Automation, so I’ll dig into that here. If you are using a different tool, it’s quite likely that some of these considerations will still apply (particularly #3 and #4), so it may still be worth your while to think through these in the context of your tooling.

1. Group your versioned migration scripts in folders per deployment (or at a more granular level)

When setting up your SQL Change Automation project, one key thing to consider is whether or not you’d like to use folders to separate your migration scripts. Folders are extremely helpful in separating migration scripts into individual groups, which can make your life much easier when planning and managing deployments.

If you need to re-order a deployment and you have captured all the scripts for that deployment in a folder, it is much more intuitive to manage order changes by removing or renaming folders.

Note that a folder can hold either other folders OR it may hold scripts.

This means you can use subfolders, which is very convenient! You simply cannot combine scripts and folders at the same folder level.

2. Do you prefer to disable “programmable objects” so that all changes for a deployment are in a single folder?

SQL Change Automation’s programmable object feature treats stored procedures, views, user defined functions (UDFs), and DDL triggers in a special way: it automatically manages these objects as repeatable migration scripts. This is possible because the entire code for these objects is always included in a command to either create or alter them — unlike, for example, an ALTER TABLE statement which only contains details about the specific parts of the object being altered.

This can be advantageous for teams who frequently make changes to these types of objects. The benefits of enabling programmable objects are that:

However, the consistent naming and location of programmable objects means that they are not stored in the same folders as versioned migrations.

This adds some complexity to the process of identifying which changes are grouped together for a planned deployment. If you would like this to be a simple process and to use only versioned migrations in folders for all database changes, you may do this by disabling the programmable object feature.

3. Make a plan on how to remove a deployment from an environment

There will be times when you decide to “back out” changes from a branch and the related environment. It’s worth thinking through your strategy on how to accomplish this.

If you have adopted the strategy of provisioning database environments on demand, then your plan for this will likely to be to reset the environment, either by reverting it to a prior state (if you are using a snapshot or clone related technology that has this feature), or by deploying a fresh, production-like copy/clone of the database environment. Once you have done this, you may make changes to your version control branch to remove code as needed and re-deploy to the database.

If you are not able to quickly reset or re-provision the database environment, you may leverage comparison tools to remove some code changes. To do this, while still maintaining the ability to simulate a production-like deployment:

Please note that I don’t recommend modifying the dbo.__MigrationLog table in production. This table contains the history of your deployments, and you want to protect this in your production environments!

If you require a simpler approach to this: you may simply modify the code in your version control branch and execute SQL Compare between that branch and the SQL Change Automation project and the target database. However, consider that this simpler approach does not fully test the way in which your code will be later executed to higher environments. Perhaps that risk is acceptable if the code will still be deployed to several environments later in the pipeline.

4. Make a plan on how to selectively promote a change to the next environment

Many teams have a need to quickly move certain changes — notably hotfixes — through a development pipeline.

As in previous examples, if you have the ability to quickly provision a production-like database environment for testing, this helps your ability to work with hotfixes. You may create a feature branch for the hotfix which is based upon the point in version control which represents the current stage of production, then deploy fresh production-like environments and test the change.

The feature branch is typically then moved throughout the deployment process using Pull Requests, whether you are using a branching model like Microsoft’s Release Flow, GitFlow, or the Environment Branching model discussed above.

If you are not able to quickly reset or re-provision the database environment, for speed purposes you may be forced to test the hotfix in environments which contain a significant amount of code that has not yet been released to production. This is an area where you need to weigh the pros and cons for your organization of speed vs quality of testing. The number of environments which you maintain in your pipeline will factor into this: many teams maintain at least one “staging” database environment in a state as close as possible to production, and work hard to ensure that they are able to mimic production deployments to this environment for hotfixes for safety purposes.

When planning or improving your development process for database changes, it’s helpful to step back and look at the larger picture and think of these questions:

After you decide on these strategies, those choices will help inform how you proceed in implementing projects with your toolkit of choice.

Thanks for the great question, Peter!

Kendra is a DevOps Advocate at Redgate. She has taught developers and database administrators around the world to write fast, reliable code and to improve tempo and code quality in the software engineering lifecycle for databases.

View all articles by Kendra Little

Parameter Sniffing or not sniffing: The Mindset change for new technologies