A configuration of Hyper-V networking across two or more Hyper-V Hosts is the most complex type. It needs to be configured according to the business rules and communication between Virtual Machines and the Hyper-V Parent Partition is best configured with VMBUS and VSP/VSC components. Nirmal explains how best to do it

In this part, I’ll continue to try to use a practical Hyper-V Networking example to introduce the concepts. This time, I’ll use a more complex example which illustrates the type of networking configuration that is required when it comes to configuring Hyper-V Networking between two or more Hyper-V Hosts.

We will also describe Hyper-V VMBUS and VSP/VSC design, and explain how it improves the communication between Virtual Machines and Hyper-V Parent Partition. You might want to read Part I of this series of articles here if you are not familiar with the terms used in this article. Since this part continues to explain the Hyper-V Networking examples, I recommend reading Part II here if you have not already.

We will discuss the following topics in detail:

In referring to the final scenario, I’ll assume that you’ve read Part 2 of this series here, so please do so if you have not done so already because you might get a bit lost otherwise. The scenarios in part 2 deal with configuring Hyper-V Networking on a single Hyper-V Host. It does not explain how to configure Hyper-V networking across two or more Hyper-V Hosts. This is the most complex configuration which will illustrate how to create Hyper-V networking between two Hyper-V Hosts and how to enable communication across Hyper-V Servers.

You will have noticed in the ‘Hyper-V Networking Best Practices’ section in Part 2 of this article series, which can be found here, that you should not create a Virtual Network Switch for the sake of it, because it increases the overhead for the VMMS.EXE process. This is where I hope that these scenarios, explained here, will prove to be helpful, because you can adapt the other methods explained in this topic to achieve the results as necessary. There is also a checklist provided in Part 2 that you can use before you dig more into the actual details of the configuration.

This part covers the more typical complex Hyper-V Networking configuration that is required in most production environments. This example includes two Hyper-V Hosts, and shows how you can use the methods explained in Part 2 of this article of series to achieve the communication between Virtual Machines running on two Hyper-V Servers whilst minimizing the overhead.

The Virtual Machine running on each Hyper-V Host looks like as shown in below figure, and before configuring Hyper-V Networking:

The first thing to remember is that two Hyper-V Hosts are required, and the communication should take place between Virtual Machines running on both the Hyper-V Servers except for the R&D Virtual Machines. This is completely different from the scenarios which were explained in the Part 2 here. The requirement clearly indicates that the connectivity to the External Network or Physical LAN is required because three departments except R&D need to access Servers located on the LAN. That means that we need to create an External Virtual Network Switch to achieve these requirements.

We must use the method of Hyper-V Virtual Switch and VLAN Tagging that we described in Part 2 in order to get the results we want. Otherwise you will end up creating Hyper-V Network Virtual Switches to achieve each requirement resulting in poor performance on Hyper-V Server. 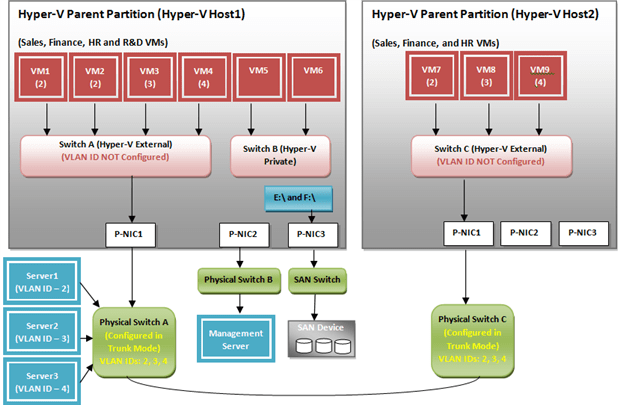 You’ll also see from the diagram that the Virtual Machines (VM1, VM2, VM3 and VM4) are assigned a different set of VLAN IDs. VM1 and VM2 belong to Sales department. VM3 and VM4 belong to Finance and HR departments respectively. VM1 and VM2 are assigned VLAN ID 2 and 3 and 4 are assigned to VM3 and VM4. All these Virtual Machines are connected to a Hyper-V External Network Switch called Switch A. This Hyper-V Network External Virtual Switch is not configured with any VLAN ID: in fact. it is configured in Trunk Mode.

Tip: A Hyper-V Networking Virtual Switch is referred to as being configured in ‘Trunk Mode’ when it is NOT configured with any VLAN IDs or left blank.

Tip: You’ll remember from previous about for tagged and untagged traffic.in my previous articles that a packet generated from a Virtual Machine will be sent to all the devices connected to it.

Physical Switch A and Physical Switch C are connected to each other to accept/forward any traffic generated by the Virtual Machines on both Hyper-V Servers. As shown in figure 1.1 above, both physical switches are configured in Trunk Mode so they can accept the packets from devices which are configured with VLAN IDs 2,3, and 4.

P-NIC2, which is a physical NIC, on Hyper-V Host1 is reserved for controlling/managing the Parent Partition.

You’ll have read in the my previous article that both Hyper-V External Network Switches; Switch A and Switch B are not configured with any VLAN IDs. If you assign any VLAN ID on the Virtual Switch, the traffic will be tagged with that VLAN ID and the communication will be allowed only for that VLAN ID Tagged packet.

You should not face any performance issues if you follow the guidelines provided in Part 2 and this section when configuring Hyper-V Networking to achieve any requirements.

Hyper-V Networking VMBUS and VSP/VSC design and how it improves the communication.

We will learn about the following topics in this section: 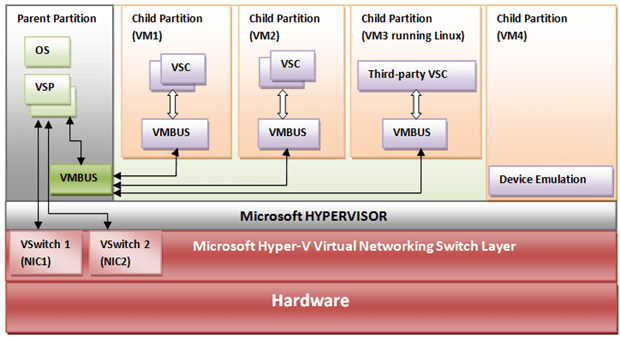 As you can see in Figure 1.2 above, there are four Virtual Machines created or I should perhaps say four Child Partitions (VM1, VM2, VM3, and VM4). VMBUS is a component which is running in all the partitions to help communicate with the components running in Parent Partition (VSPs). Explaining all VSP components is out of scope of this article. So we will stick to the Network VSP/VSC design and see how it improves the overall Hyper-V Networking performance.

As you can see in Figure 1.2 above, there are two Hyper-V Virtual Networking Switches created; vSwitch 1 and vSwitch 2. These Switches are directly connected to the Network Virtual Server Provider in Parent Partition. The VMBUS communication channel handles the requests coming from Network Virtual Service Clients (VSCs) running in Child Partitions and forward the requests to VSPs running in Parent Partition. This communication is more efficient and faster.

When you install Integration Services, a set of drivers get installed in the Virtual Machines. For Network VSC, the driver which gets installed in Virtual Machine is netvsc60.sys or netvsc50.sys. These drivers have been programmed for Hyper-V Networking and talk to each other to improve the overall networking performance. 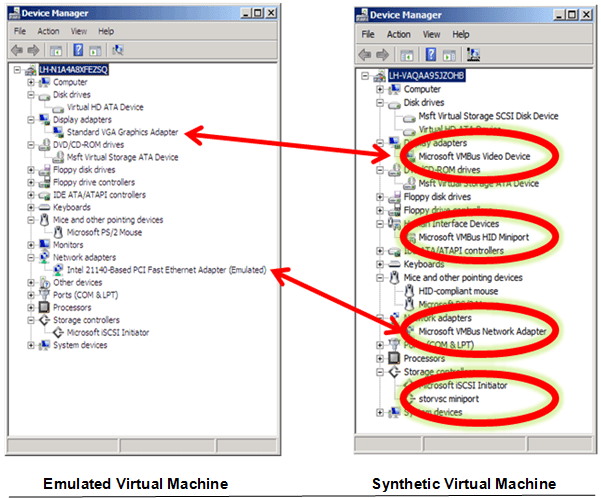 You can install Integration Services components only if the Guest or Server Operating System is supported by the Hyper-V or Microsoft. For a list of supported Operating Systems, you can read the Part 1 of these articles of this series here.

In this article we saw how Hyper-V Networking is configured between two or more Hyper-V Hosts. We have also learned how Hyper-V improves the network communication with the help of VMBUS and VSP/VSC components. We also learned about the Synthetic and Emulated Virtual Machines and how they are different from each other.