Writing aggregate queries is one of the most important tasks for anyone working with T-SQL. Determining the expressions required in the GROUP BY clause is not that difficult, but what do you do if you need to include different combinations of group by expressions in the same result set? Alfonso demonstrates how to use the GROUPING SETS operator to accomplish this task.

Maybe you have felt overwhelmed when you’re analyzing a dataset because of its size. The best way to handle this situation is by summarizing the data to get a quick review.

In this article I’ll demonstrate how to achieve the same results using each method.

All queries in this article will run in the AdventureWorks2012 database. If you wish to follow along with this article, download it from here.

According to Table 1, the company have been registering income between 2005 and 2008. Assuming that the currency is in US dollars, in 2005 their income was around eleven million dollars. In 2006 it was around thirty million dollars, and so on. This kind of information would be useful for supporting a business decision such as opening a company extension elsewhere.

However, if you still want more details about the company’s income, you must perform a new grouping by adding a column or expression to the GROUP BY clause. Add the order month to the previous set of group by expressions. By doing this, the query will return the company’s income per year and month. Review the GROUP BY clause in the following query.

The following table contains the result set of Query 2:

This result set is more detailed than the former. In July 2005, their income was around nine hundred sixty thousand dollars. In August 2005, it was around two million dollars, and so on. The more expressions or columns added to the GROUP BY clause, the more detailed the results will be.

Suppose the business manager at Adventure Works wants to visualize both results within a single result set. To accomplish this, you may merge the previous queries – Query 1 and Query 2 – by using the UNION ALL operator. First, modify Query 1 by adding a dummy column so it will have the same number of columns as Query 2. All queries merged by the UNION operator must have the same number of columns. This dummy column will return NULL in the OrderMonth column, identifying the OrderYear total rows of this query. The UNION ALL query looks like this:

Figure 1 shows the result set produced by Query 3. Review the comments in the figure which identify the grouping sets. 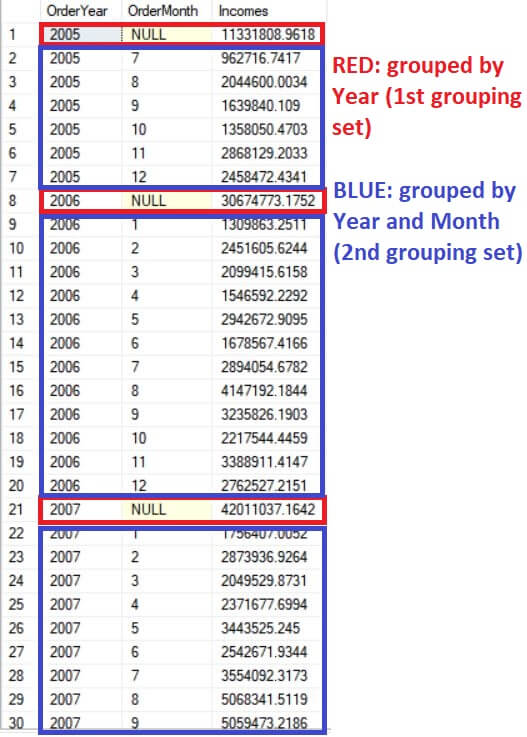 Maybe you’ve figured out how the NULL values appeared in the result set. Remember you used the NULL as a dummy column to identify the results from the order year grouping. Look carefully at Figure 2 which details the placeholders in the first grouped query. 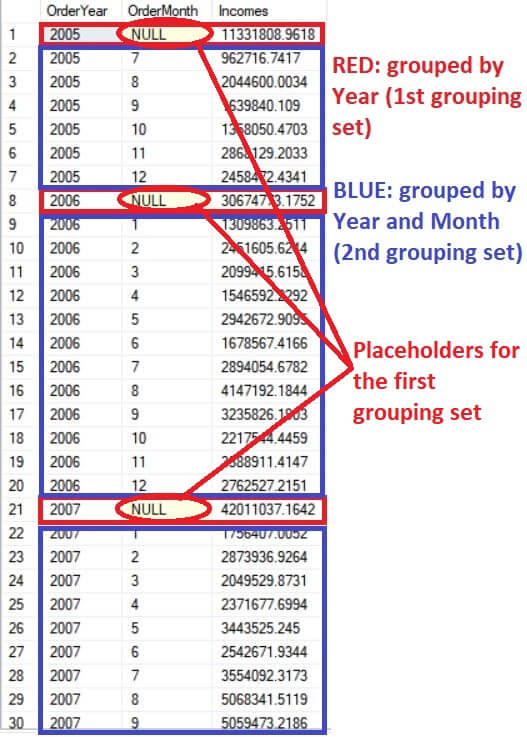 Figure 2. Pointing out the placeholders.

Although you obtained the desired result, Query 3 would be even larger if you added another grouping set, such as order day. As a data analyst, you decided to search the internet to find a way to achieve the same results but with less work. You find that by using the GROUPING SETS operator you should get the same result set, but with less coding! This really motivates you, and you write the following query using GROUPING SETS:

Query 4. Getting the same result set produced by the Query #3 but using the GROUPING SETS clause.

The result set produced by Query 4 is the same as that displayed in Figure 1. Figure 3 shows the results, but the new technique requires less code. The GROUPING SETS operator is used along with the GROUP BY clause, and allows you to make multi-grouped queries just by specifying the grouping sets separated by comma. However, you need to be careful when specifying the grouping sets. For example, if a grouping contains two columns, say column A and column B, both columns need to be contained within parenthesis: (column A, column B). If there’s not a parenthesis between them, the GROUPING SETS clause will define them as separate groupings, and the query will not return the desired results. 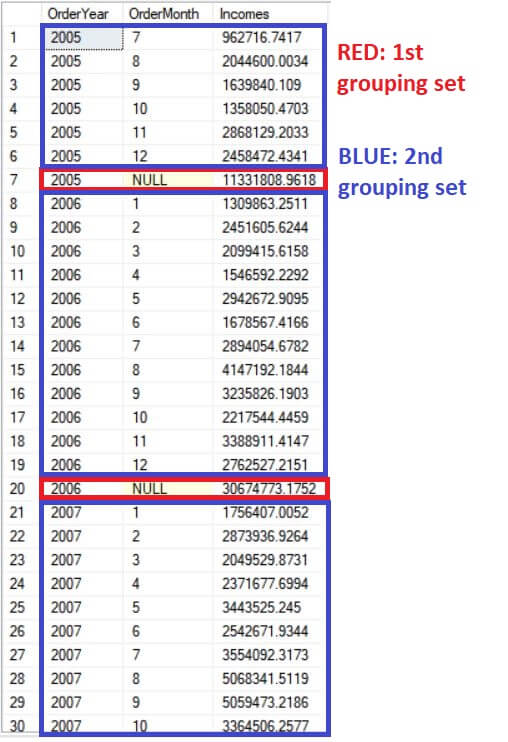 By the way, if you want to perform the aggregation over the entire result set without grouping but still use the GROUPING SETS operator, just add an empty parenthesis for the grouping set. Look at Query 5 which calculates the company’s income per year, month, and overall total:

Query 5. Company’s income per year, per year and month, and overall. 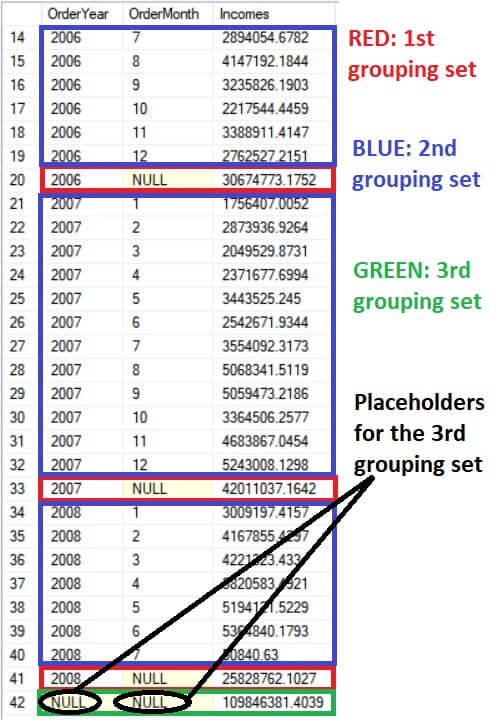 Figure 4. Company’s income per year, per year and month and all over the time.

By the way, if you’ve asked yourself “What would happen if the NULL is part of the data and isn’t used as placeholder?” or “How can I tell when NULL is used as placeholder or is just the value?” In this example, I ensured that the grouped columns aren’t nullable, so the NULLs are used as placeholders. In case the grouped columns are nullable, you will need to use the GROUPING or GROUPING_ID function to identify if the NULL came from the GROUPING SETS operator – it can also come with other groupings operators like ROLLUP and CUBE– or is part of the data. Both functions – GROUPING and GROUPING_ID– will be treated in another article.

In this article, you learned how to achieve an aggregate query with more than one grouping expression list by using the GROUPING SETS operator. Unlike other operators such as ROLLUP and CUBE, you must specify each grouping set. These grouping operators are very important for summarizing data and producing grand totals and sub totals. If you want more information about these operators, please read this article.

I suggest that you practice what you’ve learned in this article; this topic is very important for anyone working with SQL Server data. The data volume is increasing very quickly, and it’s vital to summarize it for better knowledge about the business.

I'm a Software Engineer from the Dominican Republic. When I was younger, I used to watch maths videos before going to sleep each night; everyone considers that as a weird habit, but to be honest, I really enjoyed - and actually still do! I have two main hobbies, the first of which is reading about technology, such as programming languages, database, software applications, and so on. The other hobby is spending my nights playing retro video games. I also really like working with data, especially using tools to explore it - SQL is my favorite. I consider myself as a curious person, who really wants to share his knowledge with others and contribute to the technology community.

View all articles by Alfonso Hernandez

0 0
No one is good at something right when they start. When starting something new, it’s normal to feel terrified or have “imposter syndrome.” You’ll constantly be rubbing shoulders with people that are more experienced, more talented, or seemingly more confident.  It takes a long, long time to get good at something. Of course, there are … Read more
0 0