When the optimizer doesn’t estimate the correct amount of memory for a query, either memory is wasted that could be used for other processes or some operations will spill to disk. Microsoft has added Memory Grant Feedback to help overcome this issue. In this article, Greg Larsen explains what you need to know about this new feature.

In older versions of SQL Server (prior to SQL Server 2019, aka 15.x), SQL Server memory grant feedback supported was added, but only for batch mode queries. Queries that use batch mode performing scanning and calculations on up to 900 rows at a time, versus row mode that only processes one row at a time. With the introduction of version 15.x, memory grant feedback has been expanded to support row mode queries as well.

The Memory Grant Feedback features (batch and row mode) are part of the into the Intelligent Query Processing (IQP) feature set. See Figure 1 for a diagram that shows all the IQP features introduced in Azure SQL Database and SQL Server 2019, as well as features that were originally part of the Adaptive Query Processing feature included in the older generation of Azure SQL Database and SQL Server 2017.

To better understand how memory grant feedback works, let me explore the memory grants required for a specific query as it is executed the first time and then is adjusted over time for each subsequent execution.

In order to explore how memory grants change over time, I will execute a given query over and over again. Each time it runs, I will show you how much memory was allocated and used by the query, as well as the additional feedback provided to help the databases engine adjust the memory requirement each time the query runs. To explore how the new version of SQL Server, version 15.x, adjusts memory requirements over time, I will run a query that executes against the WideWorldImporters database which can be downloaded here. The specific query to test the row mode memory grant feedback feature can be found in Listing 1.

Before testing this query, let me review why the memory grant information is incorrect and perform a few setup steps to prepare for testing the new row mode memory grant feedback feature.

Why is the Memory Grant Information Incorrect in the First Place?

There are many factors that make up how much memory a given query requires. The query optimizer needs to consider the memory requirements of each operation of an execution plan when calculating the total amount of memory to grant. Here is a list of some of those things the optimizer considers when calculating the amount of memory to grant to a query:

SQL Server needs to consider all the different aspects of where memory will be needed to successfully process a given query, in order to calculate the amount of memory to grant. If too much memory is granted then SQL Server is wasting memory that could be used for other processes. Or if to little memory is granted then a query will spill to disk, which is an costly operation.

The next thing to do is clear out the procedure cache with the code in Listing 3. I do this so when I run the test query, the engine will create a new cached plan for the test.

With the environment all set up, I’m ready to perform the initial execution of the test query in Listing 1.

To show the amount of memory that is used by the test query and the feedback that the database engine provides, I will review information from the actual execution plan from each execution of the test query.

When I run the code in Listing 1 the first time, I get the execution plan displayed in Figure 2. 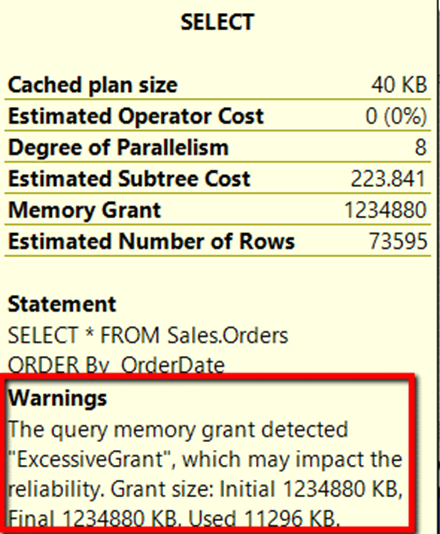 The SELECT statement information shows an excessive grant warning. The query was granted 1,234,880 KB of memory, but it only used 11,296 KB. This means the query allocated much more memory than what the query needed. 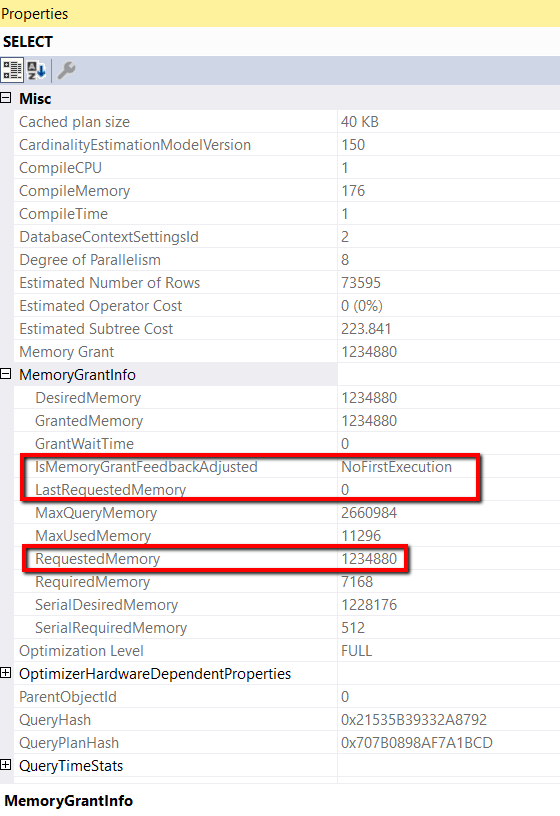 In the initial run of the test query, the IsMemoryGrantFeedbackAdjusted property is set to NoFirstExecution and the LastRequestedMemory property value is set to 0. The RequestedMemory setting has a value of 1234880. This is the amount of memory that was requested when I ran the query the first time. To better understand the new feedback properties, let me explore the values these properties could have.

The IsMemoryGrantFeedbackAdjusted property has 5 different values, which can be found in Table 1.

By using Table 1, I can verify that when I ran the test query above it was the first time the query had been run from the procedure cache because the value displayed in Figure 4 was NoFirstExeuction.

The LastRequestedMemory property shows the amount of memory requested, in Kilobytes (KB), the last time the query was run. Since I was running the test query for the first time, the value was set to 0.

Let me run the test query a second time to see how the database engine uses these feedback properties to improve the memory allocation for the second execution.

After running the test query a second time, the yellow warning sign shown in the first execution has now gone away, as shown in Figure 5.

Figure 5: Execution Plan for Second Execution of the test query

Before rerunning the query, I should probably note something I ran into when testing memory grant feedback properties between different runs of the test query. What I found was, that if I waited too long between subsequent query execution, that the execution plan might be evicted from the procedure cache between executions. When this happens, the IsMeoryGrantFeedbackAdjusted property value will be set to NoFirstExecution, which indicates that the subsequent runs were really the first execution since being placed in the procedure cache. Therefore, to see the progression of memory grant feedback working between executions, I had to execute each of subsequent execution fairly quickly after the prior execution to avoid the cached plan eviction problem. By doing this, the test query stays in the procedure cache.

After executing the query a third time, the MemoryGrantInfo properties can be found in Figure 7. 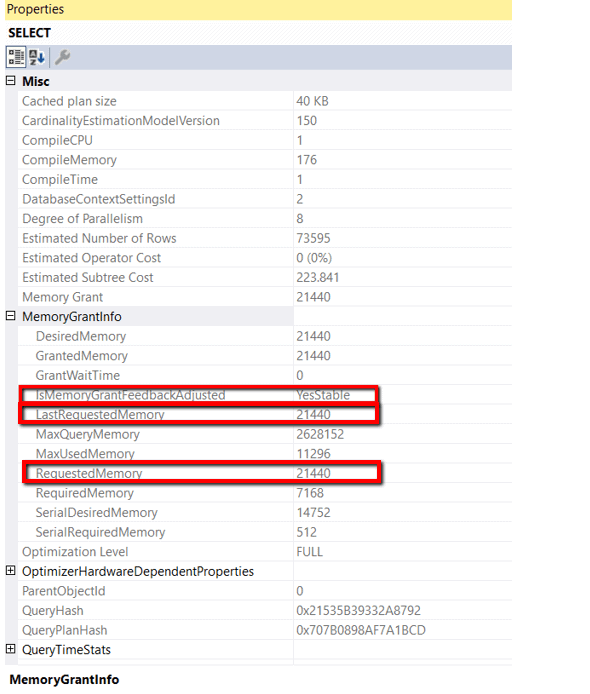 Figure 7: SELECT properties for the third execution of Listing 1

The IsMemoryGrantFeedbackAdjusted now says YesStable. This means the third execution had the same memory allocation as the second execution. I verified this by comparing the LastRequestedMemory and the RequestedMemory values to make sure they are the same. For the test query, the memory grant feedback feature allowed the query to request the appropriate amount of memory after three executions.

When Memory is Not Stable

There are some queries where the memory allocation amounts might never be consistent between executions of the same cached plan. When this occurs, SQL Server gives up trying to adjust memory and disables memory grant feedback for the query. One situation where this occurs is when you have a stored procedure that might have different parameters values passed for each execution.

To test the code in Listing 5, I will execute it from an SSMS query window and will display the actual execution plan. After I executed the code, I reviewed each of the execution plans to determine how the memory grant feedback feature affected the execution plan attributes for each execution. What I found was, from the 2nd execution of the test stored procedure through the 32nd, the IsMemoryGrantFeedbackAdjust property of the SELECT statement had a value of YesAdjusting. Eventually, on the 33rd execution, SQL Server gave up trying to adjust the memory for the test stored procedure and disables memory grant feedback. In Figure 8, you can see the MemoryGrantInfo proprieties for the 33rd execution of the stored procedure. 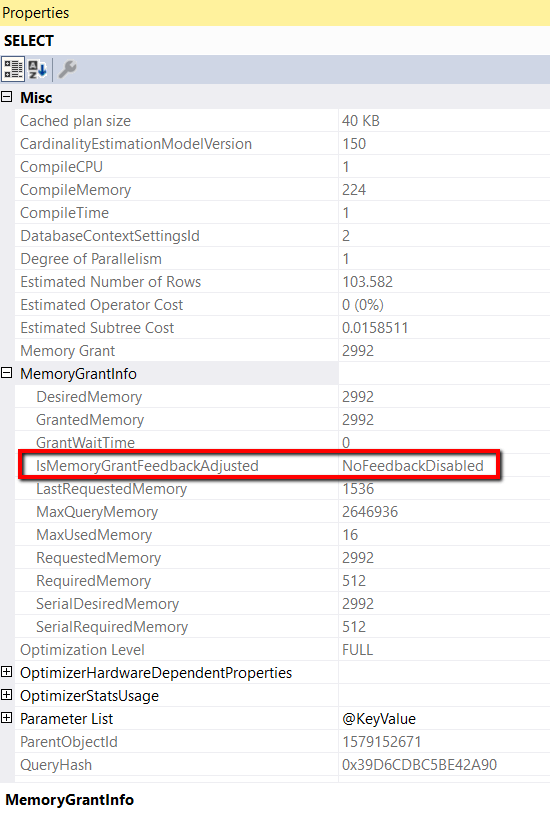 As you can see that the IsMemoryGrantFeedbackAdjusted setting is set to NoFeedbackDisabled. This means that the database engine was not able to use the feedback to get a stable memory allocation for the stored procedure, so it decided to disable memory grant feedback for the query. All the subsequent executions of the test stored procedure after the 33rd execution all have memory grant feedback disabled.

Not All Queries Need to use Memory Grant Feedback

Sometimes SQL Server guesses the amount of memory correctly the first time around, so memory grant feedback is not used in subsequent queries. Let me demonstrate this by running the code in Listing 6.

When I run the code in Listing 6, I get the execution plan in Figure 9.

The MemoryGrantInfo properties of the execution plan when running the code in Listing 6 shows that this is the first execution by looking at the IsMemoryGrantFeedback adjusted. Also, the query requested 1024 KB of memory shown by looking at the Requested Memory property. These values can be seen by reviewing Figure 10. 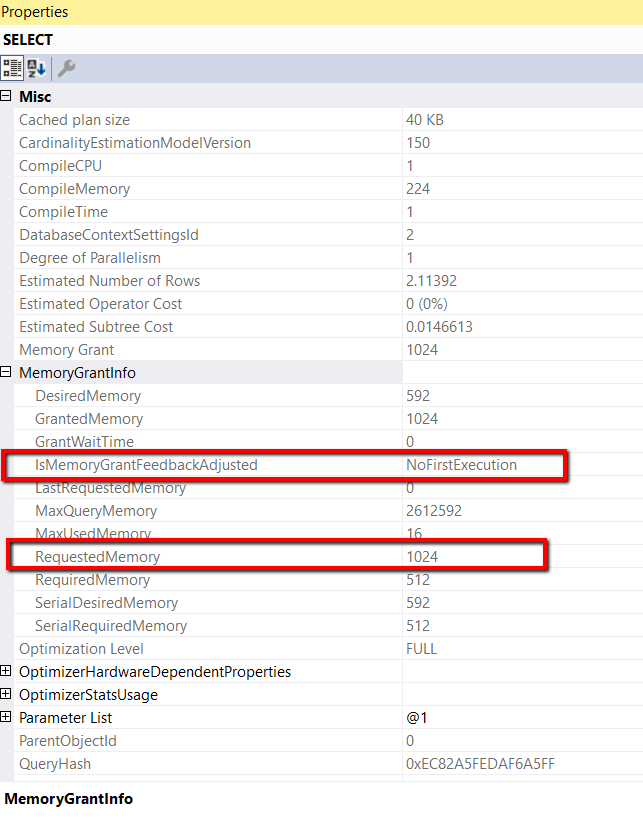 Figure 10: MemoryGrantInfo for the first execution of the query

The memory grant information for the second execution can be seen in Figure 11. 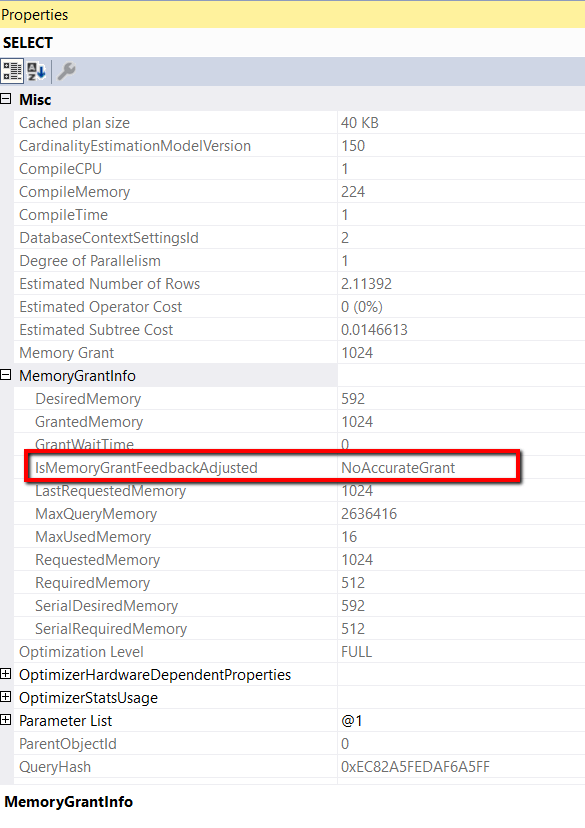 Figure 11: MemoryGrantInfo for the second execution

For the second execution, the IsMemoryGrantFeedbackAdusted is now set to NoAccurateGrant. This status means the second execution didn’t need any more memory, so memory grant feedback was not triggered. This can be verified by noting that the RequestedMemory is the same in Figure 10 and 11.

If for some reason, you would like to turn off memory grant feedback for row mode, there are a couple of ways to do this. The first one is to set the database to a compatibility level of less than 150. The only problem with this is that it also turns off all the other features that come with version 15.x. Alternatively, if you only wanted to turn off memory grant feedback for the WideWorldImporters database, you could set the ROW_MODE_MEMORY_GRANT_FEEDBACK database scoped configuration option to off, by using the script in Listing 7.

Listing 7: Turning off Memory Grant Feedback for a database