In this article Feodor clears up a few myths about storage, explains the difference in how HDDs and SSDs work and looks into the considerations every DBA should have in mind when choosing / working with SSDs.

How does SSD work and what are its physical limitations?

Solid state storage that is based on flash memory is a fairly new technology. It has only been around for some 15-20 years whereas SSDs based on RAM or NOR storage have been around longer, since 1979.

In this article I will look at a type of Solid State storage called flash memory, also called NAND. It is known as ‘flash’ because one of the inventors, while testing the electrons discharge from the cells of the media exclaimed “This looks like a camera flash”.

As we can imagine, the first most obvious limitation of this structure would be the finite number of program-erase cycles. Every time the cell is charged and discharged, it gets closer to being unable to hold a charge. Once this happens, the entire sector fails.

There are very few producers of NAND chips in the world. Keep in mind that NAND chip producer does not mean storage media producer. In reality, the NAND chips are bought by Solid State Disk manufacturers, which use the NAND chip manufacturer’s interface specifications to write software that controls the NAND chip within the product.

Wear leveling is a technique which prolongs the life of the NAND chips by ‘shuffling’ data around so all cells in the NAND chip get used equally. In theory this prolongs the life of the SSDs, but there is yet another limitation of the SSDs which makes the technology rather controversial when it is used with highly transactional database systems. The limitation is related to the smallest write / erase unit in the SSDs, and I will explain more about this later in the article.

The contemporary SSDs use MLC (multi-layer chips). Multi-layer chips were used to achieve greater capacity for the same area of a NAND chip. The manufacturers introduced a multi-threshold for the charge of a single cell. Even though this technique increases capacity, it also decreases the lifecycles of the chips exponentially. There are double-bit and triple-bit chips; so with a single-layer chip we can have 16GB disk space and it will have better durability than 32GB chip (a multi-layer chip) and 64GB chip (which uses triple-bit multi-layer) will be even less durable.

So, in order to keep the high capacity and still have some decent reliability, SSD vendors use cache memory. This means that data is stored first in cache (the drive write cache) and kept there as long as possible.

But this, of course, creates reliability problems – especially with SQL Server data. The main concern here is for the atomicity and consistency of the data.

The guidelines for using write-caching with SQL Server are not clear-cut, and they really depend on the hardware and whether it is battery-backed or not.

One thing is certain, however – SSDs are much more complex in software terms than an HDD and this means that there is so much more that could potentially go wrong with them during a power failure. SSDs have a lot more housekeeping functions; they have a lot more elements to power and much more to consider when the power supply becomes unreliable.

Once again, this varies from vendor to vendor.

How do HDDs and SSDs compare?

Each NAND device has:

Side-by-side comparison between SSD and HDD:

The SSDs block size depends on the manufacturer and whether it is 16, 32 or 64 sectors.

So the smallest erase unit will be equal to the block size multiplied by sector size. – i.e. if we deal with 64 sectors per block and we have 2048 bytes per sector, if we wanted to delete the data, we would need to charge an area of 128k. (This means that depending on the manufacturer, certain drives will wear off faster than others, since they have different block sizes; furthermore, in order to do an update of a single bit, the entire block has to be written someplace else and the old block has to be charged with electrons, which again means extra wearing off the drive.) 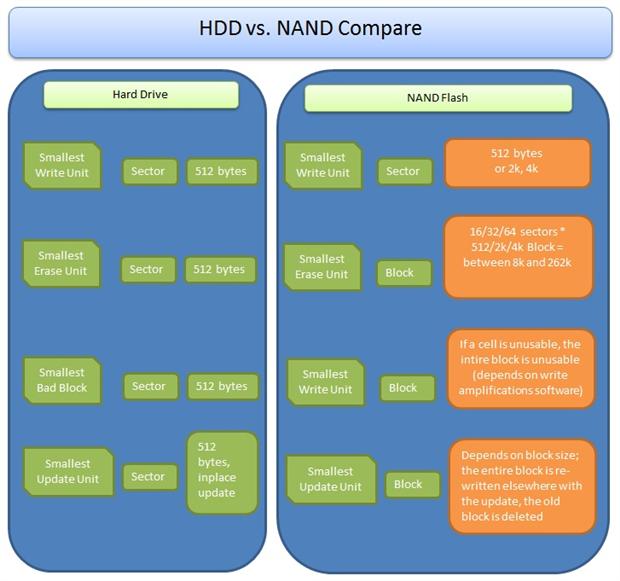 In HDDs – 512 bytes is the smallest write unit and also the smallest bad block. In SSDs it is a bit different, because it depends on the size of the sector.

The smallest erase unit is 512 bytes for HDD.

The smallest Bad block for HDD is 1 sector – 512 bytes, but for SSD is 1 block. If any cell is bad, the entire block is marked as bad. This depends on software, if it can reuse the cells (this is also called ‘write amplifications’), but generally up to the 3rd generation of SSDs, it will mark the entire block bad.

The main difference between the Writes / Updates in SSD and HDD is that when you use HDD you can modify a sector and store the data exactly where it initially was. You can change a sector. When you make a change to data on an SSD, on the other hand, the device already has a charge for the current data and so it has to write the change somewhere else and then remove the old data. Then the old space will be given to the garbage collector and the old data will be erased. This means that the cells will have extra wear.

The significance of this is that the more free space there is, the faster big changes of data will be performed. I would be very curious to test the performance of bulk updates on SSDs when the drive capacity is almost full. If every block has to be moved in order to write the update, then it will be very interesting to measure the performance and wear-and-tear of the drive during this process.

What does the use of SSDs mean for database performance

When deciding whether to use SSDs or HDDs there are several areas to be considered: