Containers are being used by more and more organizations to automate build pipelines in their CICD processes. In this article, Mahendran Purushothaman shows how to automate the creation of Docker containers and a Kubernetes cluster in Azure.

In the past decade, the software development processes and application and infrastructure architectures and technologies have gone through many innovations and changes. Organizations that started with on-premises data centers have moved to hardware virtualization, private and public clouds, containers, and now serverless applications. With this transition, many organizations are moving away from the monolithic architectures to microservices and serverless models. This article focuses on running container workloads in Microsoft Azure.

Figure 1 shows the virtualization of containers: 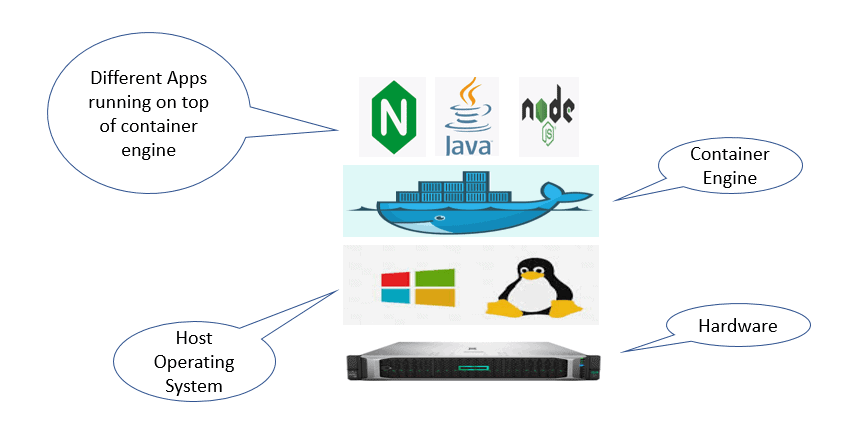 Before starting to explore containers in Azure, I’ll provide some brief detail about the Cloud Shell. The Cloud Shell is a browser-accessible interactive shell. It automatically authenticates you once you login to the Azure Portal and launch it. You can choose between Bash and PowerShell. All the required packages are already installed, so you do not need to go through the struggle of installing the Azure command-line tools and packages on your local machine. To access Cloud Shell, click on the Cloud Shell icon after you log in to the Azure Portal, as shown in Figure 2.

You could also open the full cloud shell window by accessing https://shell.azure.com/. You can use both Azure Command-Line Interface (CLI) or Azure PowerShell. This article uses CLI commands throughout.

If you have multiple subscriptions, you may want to ensure you are in the correct one. Use this command to see the default Azure subscription:

Use this command to change subscriptions:

Azure container instances are suitable to run isolated containers for use cases like simple applications, task automation and build jobs. Full container orchestration is not possible with Azure Container Instances. However, creating a multi-container group is still possible. That means your main application container can be combined with other supporting containers like logging or monitoring containers. This is achieved by sharing the host machine, local network, and storage.

You can create the Container instances through the Command Line Interface, Azure Portal, PowerShell, or Azure Resource Manager (ARM) templates. Choosing the appropriate deployment method depends on your CICD pipeline requirements. PowerShell, ARM templates, or Terraform would be preferable methods to achieve full automation. An ARM template is nothing more than the JSON file that defines the infrastructure and configuration for your Azure resources. It uses declarative syntax. The deployment process to create the container instances and deploy the images can be described as shown below in Figure 4. 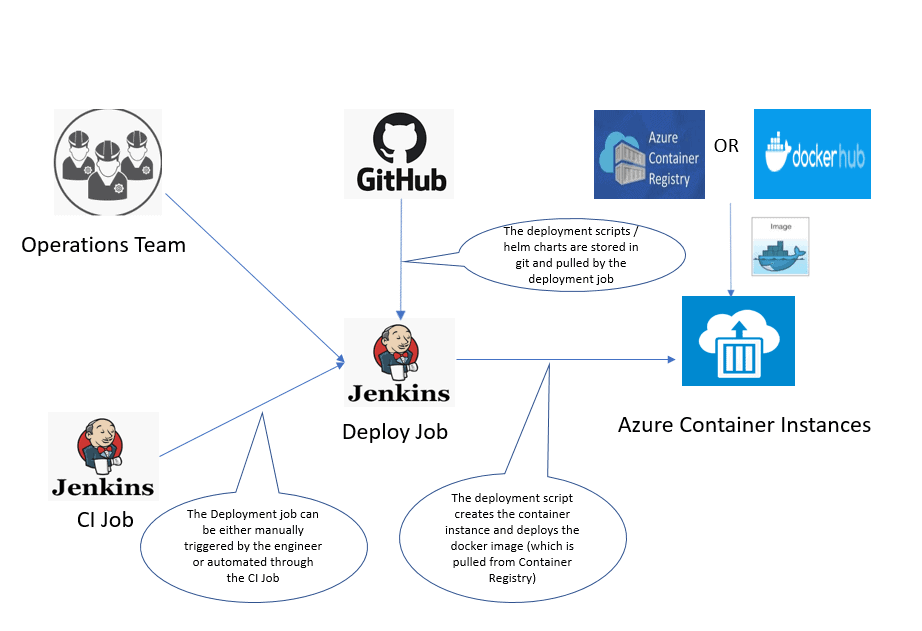 Create and run a container instance

The first step is to create a resource group. All the resources created in this article will be assigned to this resource group named mycontainerrg.

If running the above command is successful, you should see the below output and the new resource-group should be created.

Once the container is successfully created, you should see the below output – 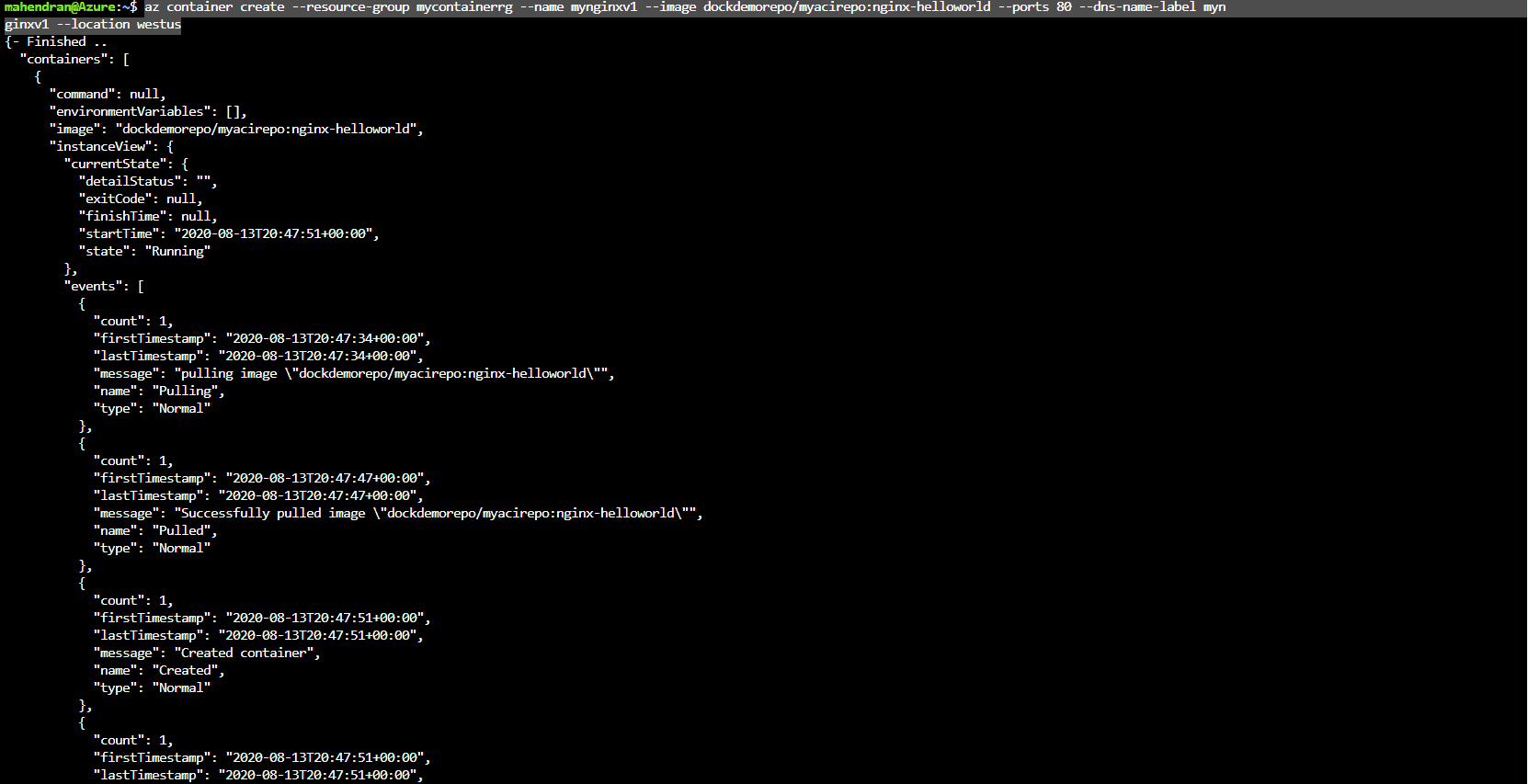 To start and stop the container, you can use the below commands

To view the container-related logs, you can use this command:

To execute the shell commands inside the container, you can use the command below:

You can access the web page served by the NGINX by using the FQDN provided in the container creation output.

You can create multiple containers in the container group, and those containers can connect to each other using the localhost and the ports each container listens. One container port can be exposed to the internet through public IP address and DNS name. However, this does not serve the purpose of multi-service architectures. In other words, you cannot deploy mass production workloads with hundreds of services connecting each other.

In this section, you’ll create a container group with two containers running on two different ports that connect to each other. This is method 1 mentioned above. Figure 6 shows the architecture diagram describing the configuration. 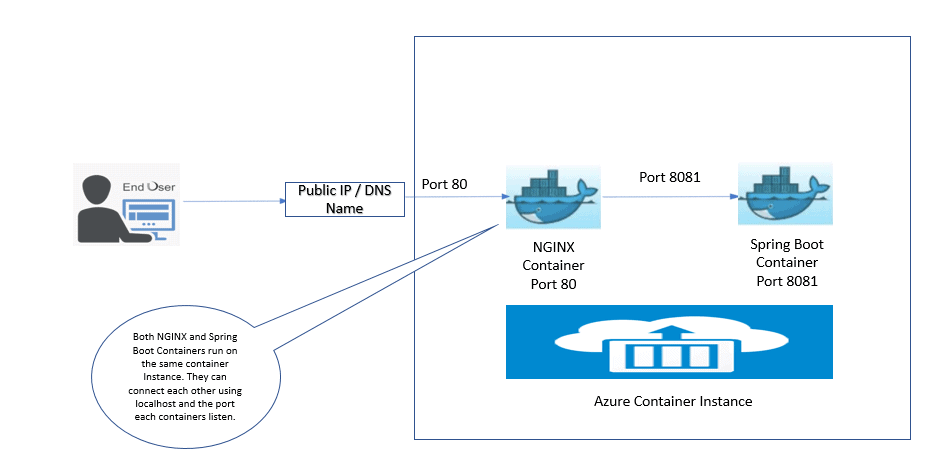 The container groups can be created using two methods.

Below is the command to export the existing containers yaml file. It exports the configuration of the container instance (mynginxv1) created in the previous section of this article.

The above command should create a file named “mynginxv1.yml”. 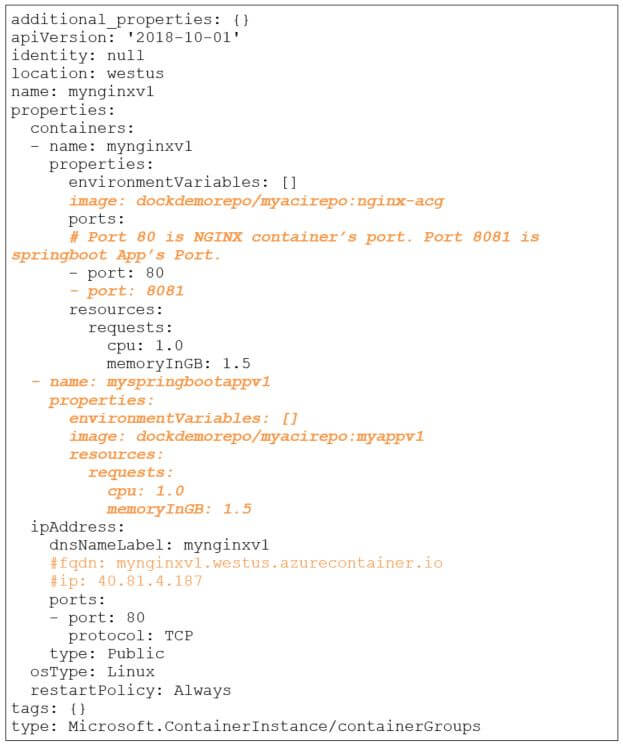 The next step is to create the container group using the below command.

The containers creation can be verified through the Azure Portal, as shown in Figures 7 and 8. 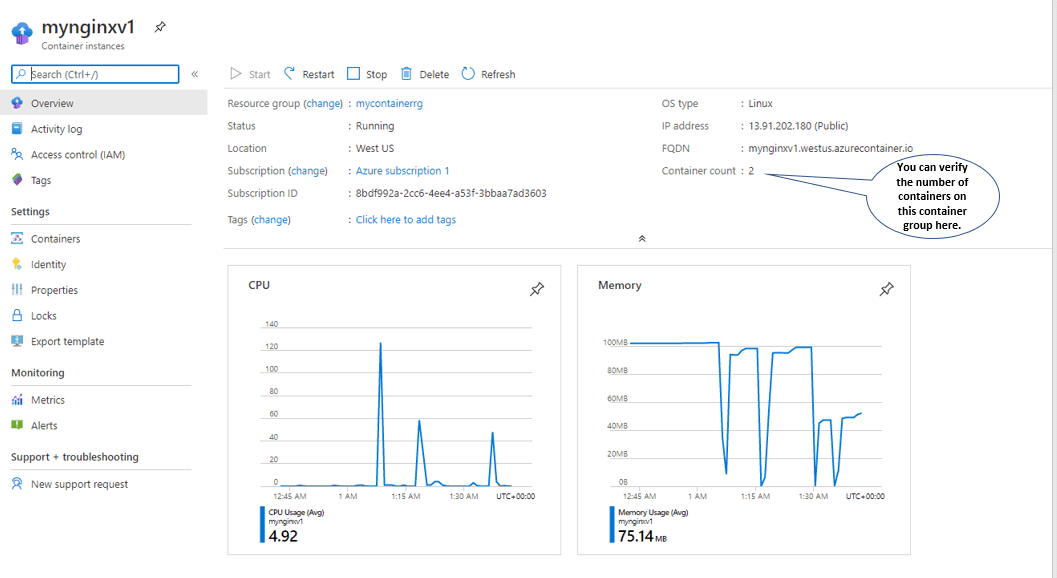 You can access both these container’s as shown in Figure 9 and Figure 10.

As shown in the previous pictures, you can see that both container’s IPs are the same, and that confirm multiple containers can be run on the same container instance and can connect to each other.

If the above command is successful, you should see the below output and successful cluster creation.

Please note – I ran into the below error, and the reason is the azure AKS CLI version. The Azure CLI on my cloud-shell had the bug related to this error. So, I had to add the “aks-preview” extension to resolve the error.

You can list the extensions by using the below command

After creating the cluster, execute the following command to configure the kubectl on your cloud-shell (Or if you are running from your local machine).

Now, create a new namespace for the application to deploy. Namespaces are used in environments with many users spread across multiple teams or projects. It is used to logically group the cluster resources in Kubernetes.

Now, you can use the kubectl commands to interact and manage the Kubernetes cluster.

Below are the commands to stop/start the Worker nodes in the AKS cluster. The az vmss list command lists the Virtual Machine scale set information, and you can grab the resource group and vmss name from this output and use it in the next command 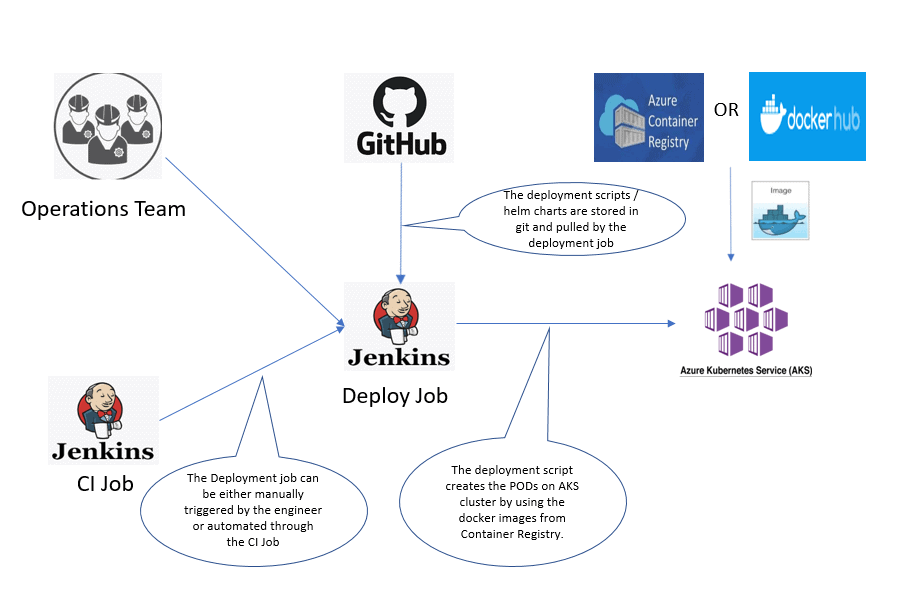 The diagram if Figure 12 describes the architecture pattern of the application. 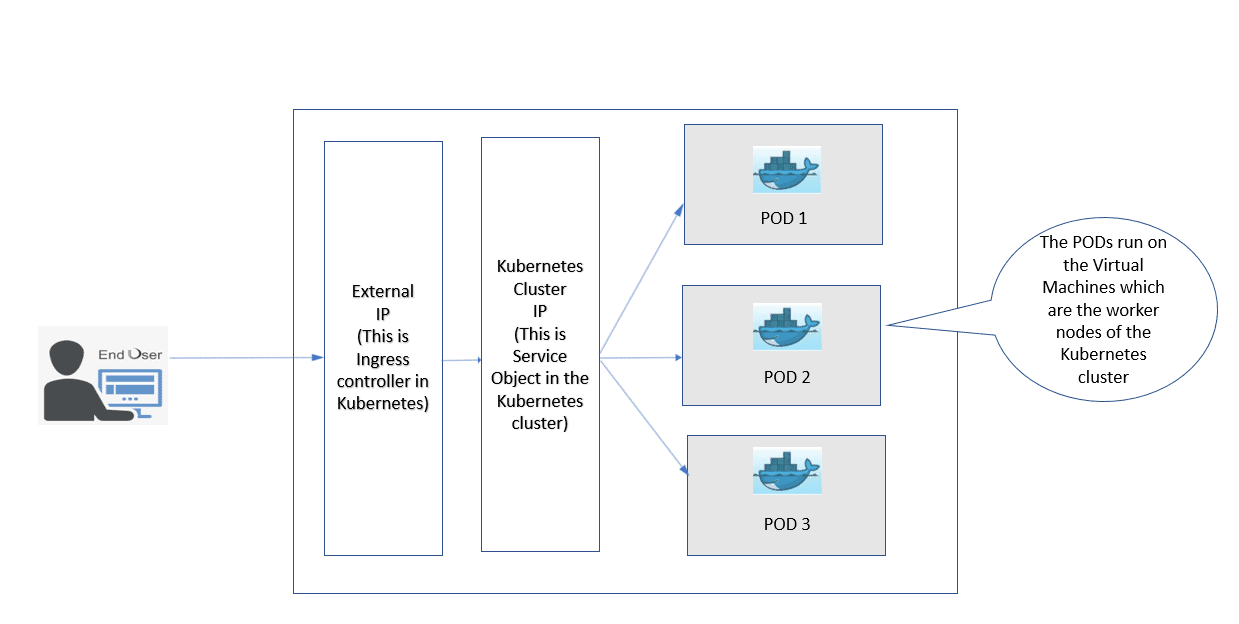 The yaml file below (save it as mynginxapp01.yaml) is used to deploy the application to the Kubernetes, Create the Cluster IP, and to Create the Ingress Service to enable the external access to the application. Before saving the file, look for the Host value. Replace part of the value by looking for HTTApplicationRoutingZoneName (i.e., c2dc921a42db48bcbab4.westus.aksapp.io) from the output of the cluster creation. You can also execute the command “$az aks list”, and that output should show this value.

After creating this file, use the below command to create the Kubernetes resources.

This command should create the resources listed below on your AKS cluster.

You can get the details of these resources using the below commands.

Now, you can access the deployed application, as shown in Figure 13.

Azure provides the capability to extend the Kubernetes service into the container instance service through the Virtual Nodes. Using virtual nodes, you can quickly launch the PODs without spending extra effort to scale up or scale out your Kubernetes worker nodes (virtual machine scale sets). To enable this feature, you should use the advanced Kubernetes networking provided by Azure CNI. However, using virtual nodes has its own limitations:

Azure container instances can be used to run light workloads and simple applications like build jobs or task automation. The mass production workloads with hundreds of services connecting to each other and developed and managed by a large number of service teams must choose the Azure Kubernetes service.

This article walked you through creating both solutions using the Azure Cloud Shell and Azure CLI commands.