The ability to scale up and down without maintaining extra hardware is one of the best cloud computing features. In this article, Mahendran Purushothaman explains autoscaling in Microsoft Azure.

Autoscaling is one of the basic and useful features offered by cloud computing. The cloud’s elastic nature combined with automation makes this feature possible. However, using this feature in the right way is challenging in real time. Almost all cloud providers offer this essential feature. In AWS, this feature is available as an “AutoScalingGroup (ASG)”; in Microsoft Azure, it is enabled with “Virtual Machine Scale Set (VMSS)”, and in Google Cloud, it is available as “Managed Instance Groups (MIG)”. This article focuses on Microsoft Azure’s “Virtual Machine Scale Set (VMSS)” and how to use it in various use-cases.

In general, there are two types of autoscaling –

Time-Based autoscaling is nothing but scaling based on the scheduled time. This type needs some extent of manual prediction of your demand. For example, suppose you know that your application experiences high traffic during certain times of the day, week or month and the number of virtual machines needed to meet that demand. In that case, you can configure the rules to spin up and shut down those needed virtual machines only during that specific time period. On the other hand, Metrics-Based autoscaling enables the scaling activity to be based on the key performance metrics of your resource like CPU, Memory, Thread Count, etc.

As I mentioned above, configuring the Time-Based autoscaling is straightforward. It is something like configuring the cron jobs in Unix or task scheduler in Windows. I will use the Cloud Shell to create the Virtual Machine Scale Set (VMSS) and attach the time-based rules.

You can view the virtual machine scale set details using the command below or through the Azure portal, as shown in Figure 1 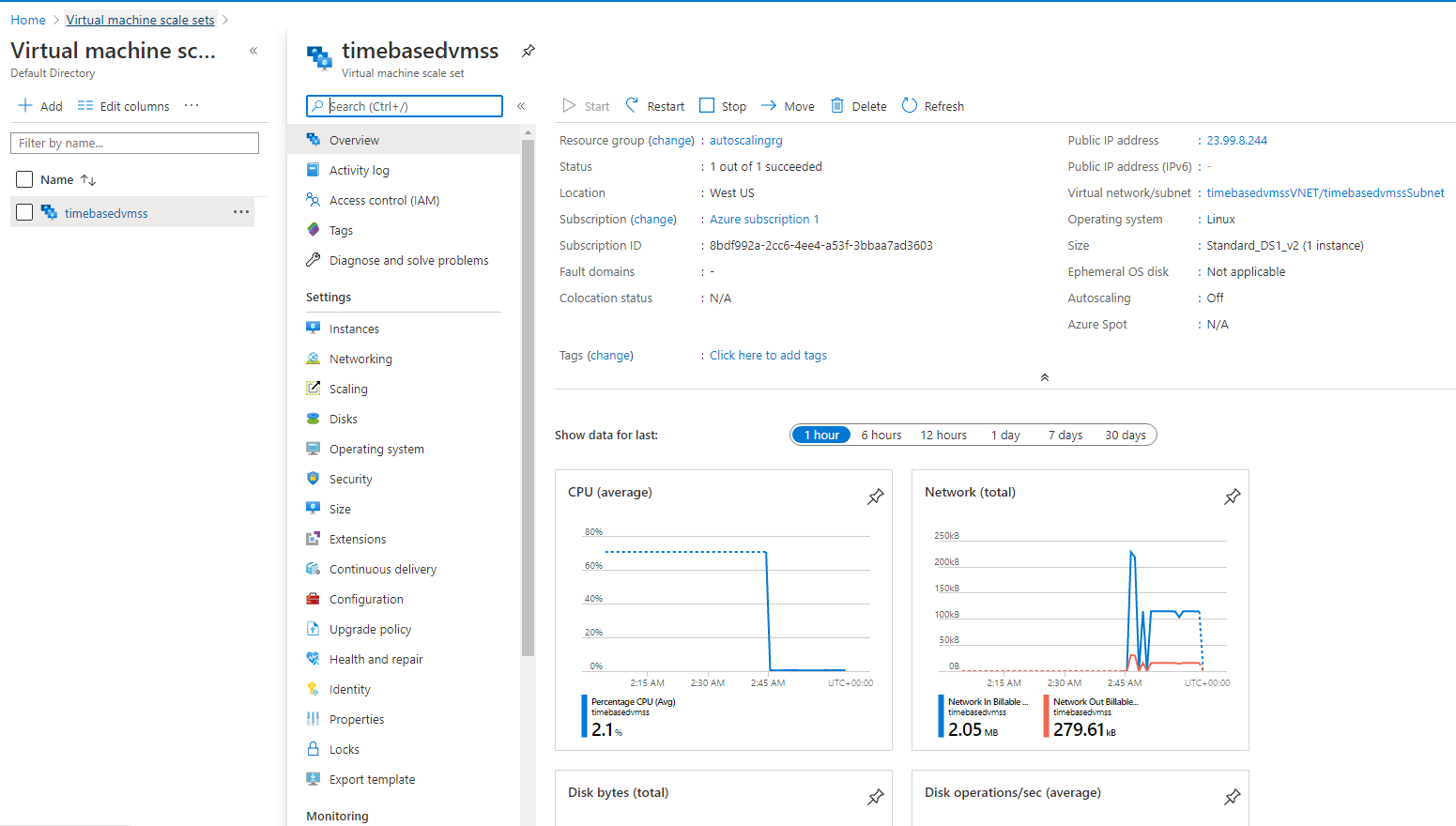 Next, you need to create the default autoscale profile and attach it to the virtual machine scale set created in the previous step. This command will create the profile: 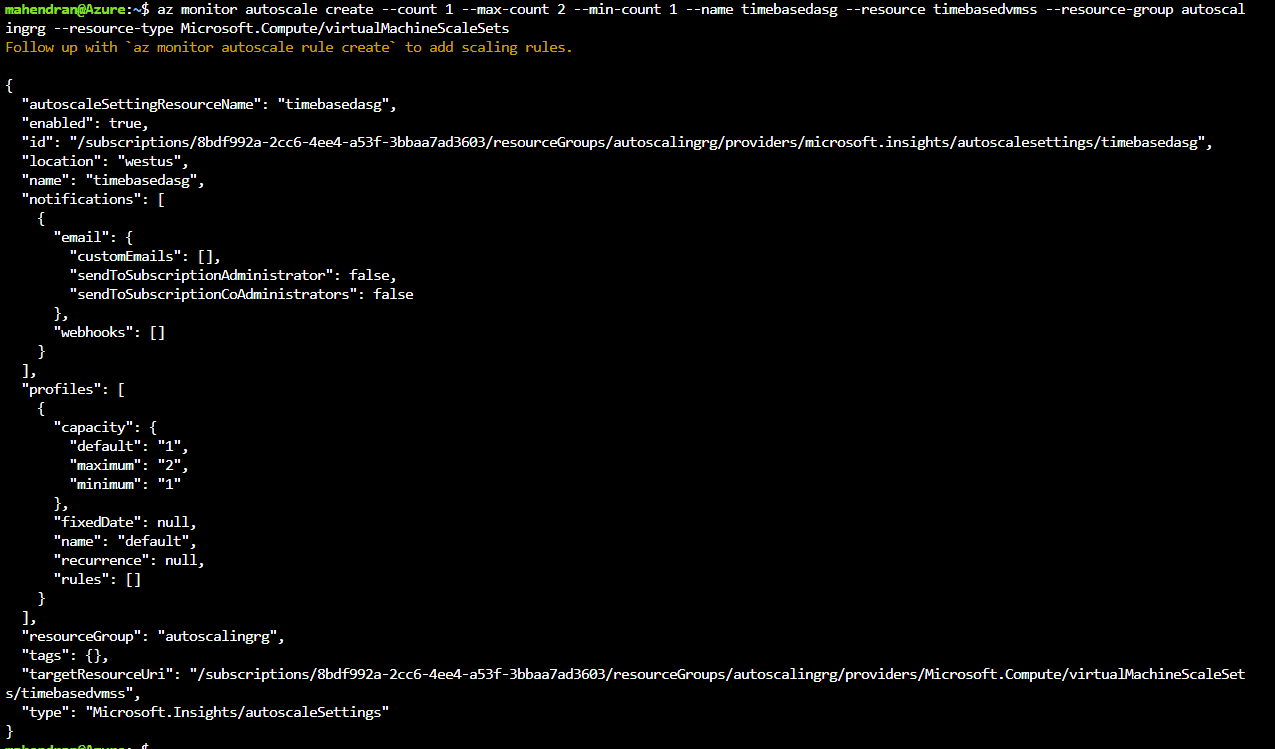 The next step is to create one autoscaling profile to scale out and another one to scale in the virtual machine scale set based on a time schedule. I am scaling out the VMSS every day at 12:25 PM PST and scaling in every day at 12:40 PM PST. This means that the virtual machine scale set scales from one (1) instance into two (2) instances every day between 12:25 and 12:40 PM PT. The reason to create two (2) profiles is that the recurrence profile only has the start time. Even though you specify the end time, it is not used in the recurrence profile. Feel free to modify the times so that you can see the autoscaling actions more quickly.

You can verify these settings through the Azure Portal, as shown in Figure 2. Note that it may take a few minutes for these details to show up, or you may have to refresh the page. 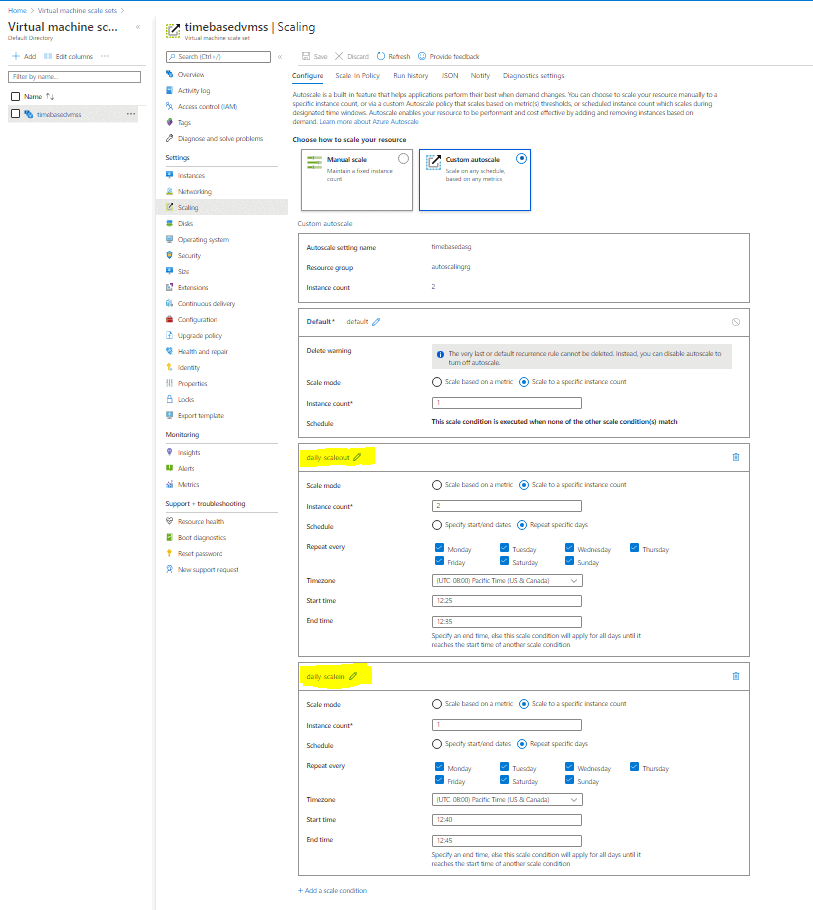 Figure 3 shows the autoscale profile “daily-scaleout” scaled out the stack from 1 instance to 2 instances.

Figure 3. Autoscale Profile scaling out the stack from 1 instance to 2 instances

Figure 4 shows the autoscale profile “daily-scalein” scaled in the stack from 2 instances to 1 instance.

Figure 4. Autoscale Profile Scaling in the stack from 2 instances to 1 instance

You can also list the instances using the command-line after scale-out and scale-in, as shown in Figure 5

Figure 5. Verifying the number of instances through command line

Use cases of Time-Based autoscaling

I deleted the previously created time based autoscale setting – “timebasedasg” and created the new metric based autoscaling setting called “metricbasedasg”.

To delete the previously created “timebasedasg” autoscale setting , use this command:

To create the new metric based autoscale settings, run the next command:

The next step is to create the scaling rules to scale out and scale in the virtual machine scale sets.

Use these commands to create the rules:

When you created the virtual machine scale set, you created it with the admin account and the generate SSH keys option. To retrieve those details, you can use the below command –

Now to SSH into the above, you need to retrieve the public IP of that instance. You can also retrieve it from the azure portal console, as show in Figure 6. The value of KeyData in the above output is the SSH public key from where you issued the vmss create command.

Here, I have the inbound NAT rule enabled, so I should use the port 50000 instead of using the standard port 22. From the cloudshell, issue the below command, replacing the IP address, to ssh into the virtual machine.

Now, install the stress utility and run it.

Once you execute the stress command, you can check the CPU utilization of the virtual machine either using the “top” command on the instance or through the Azure Portal, as shown in Figure 7.

Figure 7. CPU spike on the virtual machine as we execute the stress command on the instance

Figure 8. Autoscaling rule scaling out the stack from 1 instance to 3 instances.

Figure 9. Autoscaling rule scaling out the stack from 3 instance to 4 instances

After scaling out to 4 instances, the average CPU utilization of the stack came down to below 40%, as shown in Figure 9

Figure 10. The Average CPU utilization of the stack fell below 40%

The scale-in autoscaling rule was triggered when the average CPU utilization reached below 40%, and it scaled in the stack from 4 instances to 3 instances, as shown in Figure 11.

Figure 11. Autoscaling rule scaled in the stack from 4 instances to 3 instances.

Figure 12. The Average CPU utilization of the stack reduced further after stopping the stress command

Figure 13. Autoscaling rule scaled in the stack from 3 instances to 2 instances.

Figure 14. Autoscaling rule scaled in the stack from 2 instances to 1 instance.

Use cases of Metrics-Based Autoscaling

Below are some use cases of Metrics-Based autoscaling.

Autoscaling is an essential feature of the cloud and should be used to ensure that your application is always ON and available for customers. It also helps to reduce your monthly bill 😊.

0 5
Let’s talk about authentication between Azure Functions and resources used by Azure Functions and conclude with many poorly documented secrets about how to use User Assigned Managed Identity. When we build Azure functions, they usually need to authenticate against other Azure resources: Azure SQL Database, Storage Accounts, Service Bus and many more. Each of these services … Read more
0 5