Website visitors will have come to expect to be able to use OAuth authentication, rather than require yet another ID and password. Although MVC5 provides Google, LinkedIn, Facebook or Twitter authentication, you would need to write custom authentication middleware for any other provider. Ed Charbeneau shows you how to get started.

OAuth allows web users to prove their identity when using a web site without having to create a subscription or supply details or credentials, using instead their Google, LinkedIn, Facebook or Twitter accounts. If a Web site implements OAuth, then visitors can use the site without worrying about their access credentials being compromised.

Because MVC 5 is built on Katana, an implementation of the OWIN specification, authentication has changed significantly and the authentication providers written for previous versions of MVC will not work. They will need to be rewritten as OWIN middleware. OWIN is a new modular interface for handling HTTP requests designed to decouple the server and application.

OWIN Middleware Components or OMCs are modules written to work with Katana at a low level and are used to respond to HTTP requests. OMCs implement the IAppBuilder interface and are added to the OWIN pipeline using the I AppBuilder.Use method. The OWIN pipeline in the Katana runtime will process OMCs in the order they were registered in the application.

For more detailed information about OMCs in general, please refer to the Katana overview OWIN Middleware in the IIS integrated pipeline in the ASP.Net documentation

In the Microsoft MVC source code for Facebook authentication; you can see the UseFacebookAuthentication helper used to register the middleware via app.Use.

Each authentication middleware provides an API for setting up the middleware options and invoking IAppBuilder.Use . The Use [ AuthType ] Authentication extension methods are primarily syntactic sugar designed for easy setup.

This excerpt from a standard MVC application’s App_Start\Startup.Auth.cs file shows how OAuth providers are initialized.

The OAuth process is complex and requires several interactions with the user, browser, application/middleware, and the OAuth service. Let’s look at an overview of the process grouped into five main steps:

There are many detailed sub processes that must occur in each of these steps. Since we are creating a custom authentication middleware we will be responsible for handling each detail of the entire authentication process. 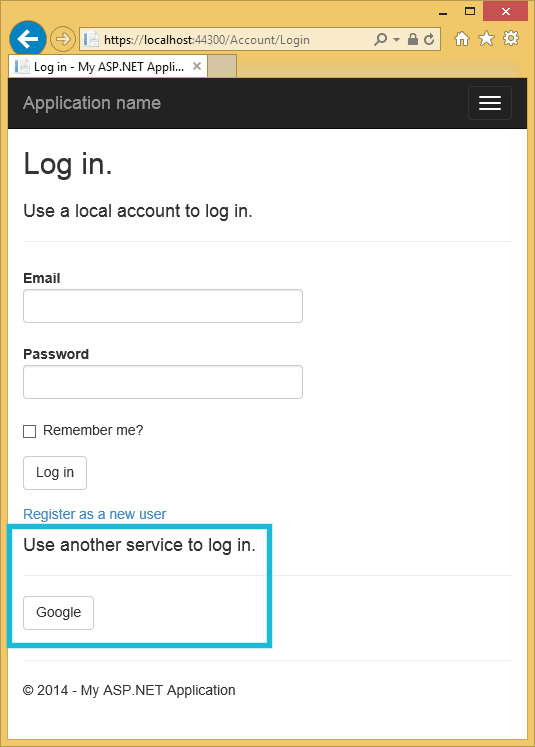 When the request reaches the application, the middleware will intercept the request. The request will contain the callback path, the authorization code needed for retrieving an authentication token, and other information required by the API such as: client id, client secret, and CSRF tokens.

The service will respond with a success status and contain the authentication token. Depending on the API and addition request may be required to obtain detailed information about the user. Once the user’s information has been collected and ClaimsIdentity is created, the ClaimsIdentity will be returned to the application via the AccountController.ExternalLoginCallback action. The application now has the user’s information and can create a user profile and login the user. 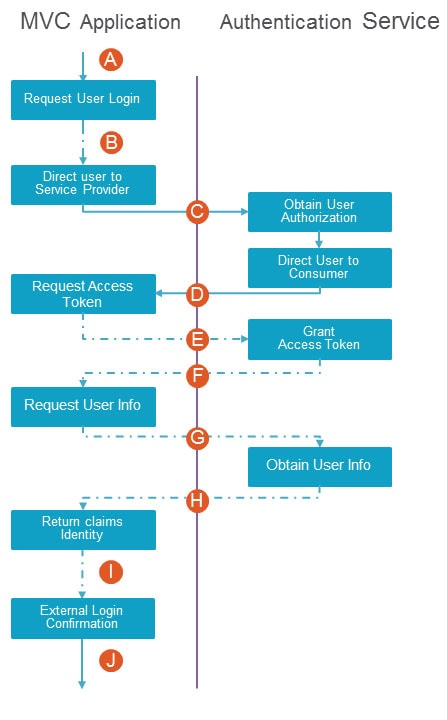 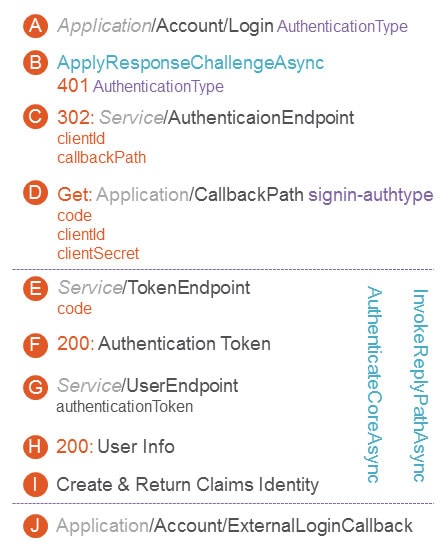 The diagram shows the authentication process in reference to the middleware and application.

OAuth middleware consists of several components that work together to complete the OAuth process. The following classes are used to configure and register the middleware, instantiate the provider, and handle authentication. Each component is described below in the order they are required by the authentication process.

Custom AuthenticationProvider specifies the delegates that are called during authentication. OnAuthenticated is invoked when a user is successfully authenticated. OnReturnEndpoint , is invoked before the ClaimsIdentity is saved and the browser redirects to the originally requested URL.

The InvokeAsync method is used to detect a callback request from the authentication service. InvokeAsync will check the request for a path that matches callback path (ex: /signin-facebook). When the callback path is detected the method will invoke AuthenticateAsyncCore via AuthenticateAsnyc . Once AuthenticateAsyncCore is complete the method will create a ReturnEndpointContext , grant the ClaimsIdentity and complete the request by redirecting to the application’s ExternalLoginCallback action.

AuthenticateCoreAsync performs several tasks. The method will validate the CSRF token insuring the security of the request. Next, the access token is request from the authentication service and if needed a second request is made for additional user information. Once the user’s information is collected the authentication context and ClaimsIdentity are generated. Finally, the OnAuthenticated method is called and given the AuthenticationContext .

The Katana Project on Codeplex (Microsoft)

Introduction to Bower, Grunt, and Gulp in Visual Studio

0 18
Developers are now spending much more time writing and debugging JavaScript, CSS, HTML templates etc. Microsoft have responded by adding better tools for front-end development into their development environment, Visual Studio. In this article Jon Smith uses a sample application to demonstrate how he converted an existing ASP.NET MVC5 application to use these new tools… Read more
0 18