After resisting learning Python for years, assuming it was just another object-oriented programming language, Andy Brown now gets what the fuss was about: Python really does make coding quicker. This article lists 10 reasons why Python is better than C# and will make your programming life easier (and two reasons, in fairness, why it might not).

Nearly 10 years ago, I wrote an article on this website comparing C# unfavourably with Visual Basic, which prompted many comments, roughly equally divided between praise and censure. My favourite two (now sadly removed) were “Your website looks like Teletubbieland” (which had some truth at the time, but wasn’t strictly relevant) and “You know f*** all about C#”, which had relevance but – I believe – less truth (and in its original form didn’t have any asterisks either!). To celebrate this anniversary, I’ve decided to reawaken all of you slumbering C# trolls with 10 reasons why Python is better than C# (and better than most other programming languages, too, it has to be said).

These are just beautiful! Here’s how you can write a loop and condition in Python to play Fizz-Buzz in Python:

Notice anything? There are no silly { } brackets to denote when a condition or loop block starts and ends because Python can infer this from the indentation. Why type characters when you don’t have to?

Here’s how you can declare variables in four programming languages: 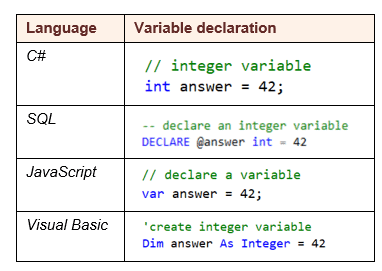 In Python, you don’t – and can’t – declare variables. Instead, you just assign values to them:

Python then creates a variable of the appropriate type (you can prove this by printing out its value):

This code would show <class ‘int’> 42. Another nice thing about Python variables is how simple the data types are: there are only integers, floating point numbers, strings, and Boolean values, which is pretty much all a programming language needs, dates being just formatted numbers when all’s said and done).

Now C# programmers will – like I did – initially throw their arms up in horror at this, but haven’t we all been writing lines of code like this for years?

This statement does exactly the same thing: it sets the type of the variable from the context.

Python is Python because of its modules: literally thousands of add-ins, covering everything from scraping websites to advanced AI tasks.

But wait a bit, you may say – C# (at least as it’s written in .NET, which is surely the most common implementation) has “modules” too. Here are just a few of the ones in the System namespace: 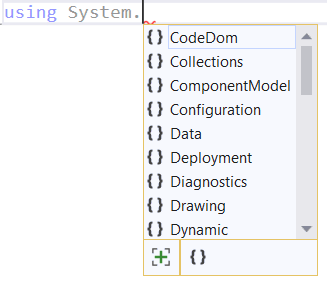 The answer to which is: yes, it does, but … Python modules are so much easier to use. To illustrate this, let’s take an example: looping over the subfolders in a folder. Here’s how you could do this in Python:

I’m aware that it’s subjective, but I find the Python modules to be almost without exception more logically constructed and easier to learn than the equivalent .NET ones, for example.

Python has four structures: lists, tuples, dictionaries, and sets, although the first two are virtually identical from the programming point of view. Purists will say that you need all the different data types that C# provides, but trust me, you don’t.

It’s not just that Python only has a few data structures; the ones it does have are so easy to use. Here’s how you create a sorted list of fruit, for example:

Programming doesn’t get any more straightforward than this!

I’m not generally a fan of languages that try to cram as much logic into as few characters as possible (that’s why I don’t like regular expressions and didn’t get on with Perl).

However, slicing sequences has the big advantage that it’s used everywhere in Python, so once you’ve learnt a few simple rules, you can pick out anything you want. And there’s a certain beauty in code like this:

C# has two separate loop structures, depending on whether you’re looping over numbers or objects, as shown by these two examples:

Here is the same code in Python:

Notice that not only is the Python for loop syntax simple and easier to understand, but there’s only one version of it (unlike in C#, where sometimes you use for and sometimes foreach).

A list comprehension is one of the most beautiful programming constructs I’ve seen. You can use it as a substitute for C# lambda or anonymous functions, and the result is transparent.

Here’s an example listing out the cubes of all the even numbers up to 10:

You could of course do this the long way round:

It’s hard to think how you could improve the syntax of the first method: show me this for these numbers where this condition is true.

I said just now that list comprehensions are beautiful, but so too are sets.

For example, the way to remove duplicates from a list of items in Python is just to convert the list to a set (since sets can’t contain duplicate items, any duplicates will be removed), then convert the set back to a list. Like this, say:

However, sets don’t just provide an elegant way to remove duplicates from lists; they also allow you to find the intersection or union of two groups of items (those long-ago maths lessons learning Venn diagrams weren’t wasted after all!).

Pretty much everything you need to know about sets in Python is covered by these few lines of code:

This code would give this output ( “Ross” is the only item in both lists, for example):

9 – Working with files and folders

Virtually everything to do with files and folders is easier than you think it’s going to be. Want to write out the contents of a list? No need to import modules – just do this :

Want to export this as a CSV file? Just use the built-in csv module:

I could go on to show reading from or writing to JSON files, Excel files, any files using pandas … Python modules make coding as easy as it can be!

10 – The quality of online help

Here are the results of a search using a well-known search engine (!) for the phrase C# tutorial: 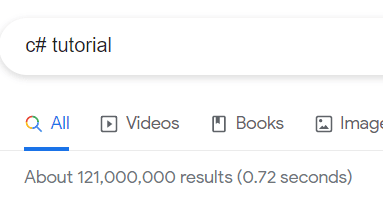 Here are the results for the same search using the phrase Python tutorial: 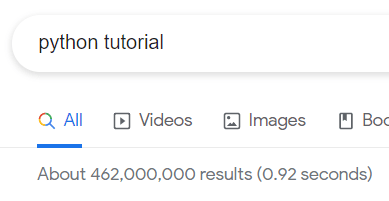 But it’s not just that Python has nearly four times as many tutorial page results: the tutorials themselves are much better, IMHO.

It would be disingenuous to end this article without giving two areas in which Python doesn’t compare well with other languages like C#.

The first way in which Python underperforms is that it’s so hard to get started. In C#, you’re probably going to choose Visual Studio as your development environment, and while you will have teething problems, at least everything is integrated. In Python, you have to choose whether to use Visual Studio Code, PyCharm, Jupyter Notebook, or any of a dozen other candidates for your IDE (Integrated Development Environment). Even when you’ve chosen your IDE, you’ll still have to learn how to set up “virtual environments” in which you can install modules for different applications that you’re creating so that they don’t interfere with each other. None of this is straightforward, and it’s a serious impediment to getting started with Python.

The second way in which Python underperforms is that it isn’t always strongly typed. This limitation is best illustrated by an example. Consider this segment of Python code:

It creates a function to add two numbers together, then calls it twice. The first call will give 8 (the sum of 3 and 5), while the second will give “SimpleTalk” (treating the “+” in the function as a concatenation symbol).

The problem is this line:

This is sometimes referred to as duck typing: if it looks like a duck and quacks like a duck, it’s probably a duck. Except that this looks like an integer and is passed as an integer – and yet is happily accepting a string into the function. The data types are just hints, it turns out: a serious limitation.

One other big difference between Python and other languages is that the former is interpreted rather than compiled. What this means is that when you run a Python program, the instructions are read as text in sequential order (no executable file is constructed first from the human-readable statements translated into machine-readable language). However, I still can’t decide if this is a good or bad thing, so I have left it off both lists above!

Why Python is better than C#

Python was created by Dutch programmer Guido van Rossum to be as easy to use as possible; he succeeded in his aim! Although the Monty Python references in documentation get a bit tedious (even for this diehard fan), if you’re an experienced C# programmer, you will enjoy the simplicity of programming in Python.

Andy works as a trainer and webmaster at Wise Owl Training, providing SQL, Power BI, Python and other training courses for businesses in the UK and (online) anywhere in the world.

View all articles by Andy Brown

0 9
You can find memory leaks in Python code with tracemalloc. In this article, Priyanka Nawalramka demonstrates how to use tracemalloc to find the leaks.… Read more
0 9