Much of the security of SQL Server is implemented as part of the database schema. This provides some bonus uses for SQL Compare. Andras, the architect of SQL Compare v 4, 5, and 6, tells how.

Security in SQL Server is a complex subject. However, because many of the com­po­nents of the security system are part of the data­base schema, SQL com­pare can help with cer­tain security administration tasks even though it is not specifically designed to do so.

SQL com­pare can help in the follow­ing ways:

SQL com­pare displays the definition of each data­base principal, and shows all the data­base and object level per­miss­ions assigned to the user or role:

SQL com­pare can help you migrate these data­base users to a different data­base. If the SQL Server login does not exist on the target data­base, SQL com­pare will create it and will set its password a default value – “p@ssw0rd”. This allows the synchronization of the schemas to be comp­let­ed, but it is cer­tainly not ideal from the point of view of security. User logins should be created separately, and their passwords set to a non-default password.

Sometimes, a data­base may contain ‘orphaned’ users, who do not have an associated security identifier (SID) in the master data­base. This may happen when a data­base is restored from backup on a different server. In this situation, SQL com­pare displays a warn­ing to help you identify the problem prior to synchronization.

By default, SQL com­pare shows the per­miss­ions that are associated with individual data­base objects. You can quickly filter objects in the data­base, or use the Find feature, to locate a particular object, for example, and then see the SQL differences relat­ing to per­miss­ions for that object in the two data­bases. You can then synchronize the per­miss­ions. For example, if a view “Expenses” in a development data­base has an additional per­miss­ion for a role called “Marketing”, that extra per­miss­ion will be added to the view in the pro­duct­ion data­base when the schemas are synchronized.

SQL com­pare allows you to explore only a subset of the data­base. One can filter out particular object types, as well as narrow down the displayed objects to ones that have a particular word present in their names. So, for example, it is easy to explore only views and stored procedures that belong to the “HumanResources” schema, or have “Empl_” present in their names.

The follow­ing screenshot shows SQL com­pare with the AdventureWorks data­base. The objects have been filtered to only tables and views that contain “HumanR” in their full name: 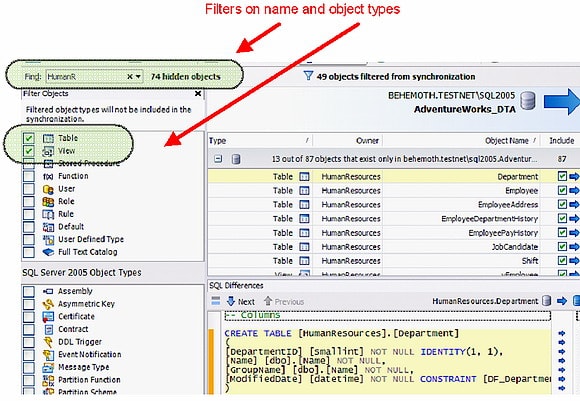 per­miss­ions in a data­base will change, either because privileges are granted or revoked, or due to malicious activity. Not all these changes may be detected immediately, and it can be a laborious, difficult task to identify them by scann­ing all the data­base principals. To help locate changes in authorization, you can use SQL com­pare to create a reference, or baseline, data­base, and then com­pare that data­base with the pro­duct­ion system at regular intervals. This will help you to quickly detect many security-related changes.

You can use SQL com­pare to save a data­base schema as a SQL com­pare snapshot. This file does not contain any table data, only the data­base schema – which contains information about users and roles and their per­miss­ions. If no changes are expected in the pro­duct­ion data­base, you can use this snapshot in a com­parison project to spot any inconsistencies, which may include places in the schema where security has been compromised.

It is good practice to assign per­miss­ions to roles rather than directly to users. People come and go in any organization, and this has to be reflected in the users who are authorized to access the data­base. Assign­ing per­miss­ions, perhaps hundreds of different per­miss­ions, to new users and then remov­ing those per­miss­ions when a user’s access is revoked can be a tiresome task, and one that is prone to errors. Assign­ing the per­miss­ions to a role, and add­ing or remov­ing users from this role, is a much faster and safer way to manage data­base per­miss­ions. If you follow this security practice, it may be necessary to com­pare the roles that exist within two data­bases, and view any differences in per­miss­ions assigned to them.

The follow­ing example shows a role, and what is considered when it is com­pared with another role. The full creation script for the role “role1” is shown on the left hand side. All the information displayed is considered for the purpose of the com­parison. However, if the “Ignore users’ per­miss­ions, and role membership” option is set, the user membership is ignored, and the role is com­pared as if it has been created with the SQL on the right hand side.

AndrÃ¡s would like to thank Brian Harris for providing the motivation to write this article and for his helpful comments and corrections on his first draft.